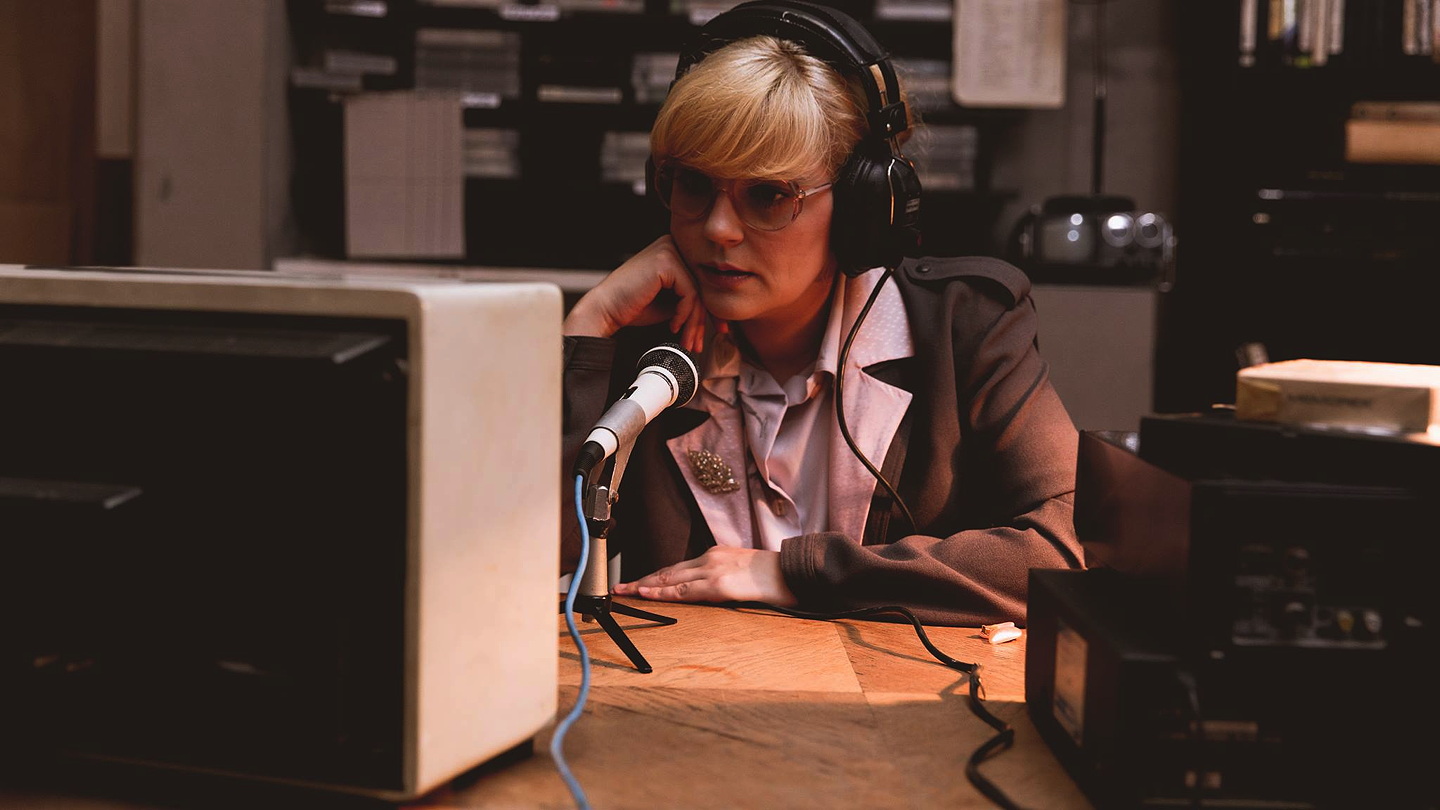 The living rooms of everyday Romanians may not be the first place you’d expect to find a rousing story of political subversion through the power of cinema, but that’s exactly what played out across 1980s Romania, when thousands of Western films slipped under the Iron Curtain via a black-market VHS racketeer and a female translator who became the voice of a revolution. DN spoke to Ilinca Calugareanu, director of feature documentary Chuck Norris vs Communism ahead of the film’s European Premiere at the Edinburgh International Film Festival about the challenges of authentically representing that bleak period of paranoid surveillance and the rebellious hope that came from gathering together to watch a bootlegged VHS movie.

As someone raised in the West it’s hard to imaging living under Ceaușescu’s oppressive regime. How much risk were the hosts and attendees of the underground video clubs putting themselves in?

One thing we tried to build in the film was an image of a dictatorship and the irrational ways in which it functions. The communist regime in Romania, especially in the 80s, worked through a form of internalised censorship and paranoia, where everyone – neighbours, family members, strangers in the street could be secret police informers, people who could turn you in and create difficulties with the system. There was no law that mentioned VCRs, but the system worked in repressive ways which changed from one day to the next. Everyone knew that having contact with the West and with Western culture was proscribed by the regime so it was best to hide all such activities. People who attended the screenings risked being blacklisted by the regime and we follow a few such stories, where people were being followed, called in by the secret police, questioned, scared. Some, especially those organising screenings had their gear confiscated, were beaten and had numerous encounters with the secret police afterwards.

Did the authorities ever attempt to subvert the underground movement by seeding their own films or dubs?

No, I think the phenomenon and its importance for millions of Romanians escaped the control of the authorities. One of the main characters, Zamfir, the man who masterminded the business that produced the dubbed tapes says it best “It’s because they (the VHS tapes) were deemed trivial, that they had such a big impact”.

Irina Margareta Nistor, the translator who dubbed over 5,000 films, was a mythic character in her own right in the minds of the underground cinema viewers. How did you approach translating that mystique to the documentary?

Most people who watched films dubbed by her in the 80s had no idea who she was, what she looked like or where she lived. But because her voice was so distinctive and she guided so many of us through the world of film, she became the “voice of cinema” and also a video nanny for my generation. People tried to imagine what she looked like and for some she was just “the voice”. I tried to build that into the film, in the way we structured it in post-production and the way we shot the dramatisations where Irina is played by the actress, Ana Maria Moldovan. I was aiming to take the audience of the documentary through the same journey and experience of Irina that we had in the 80s. 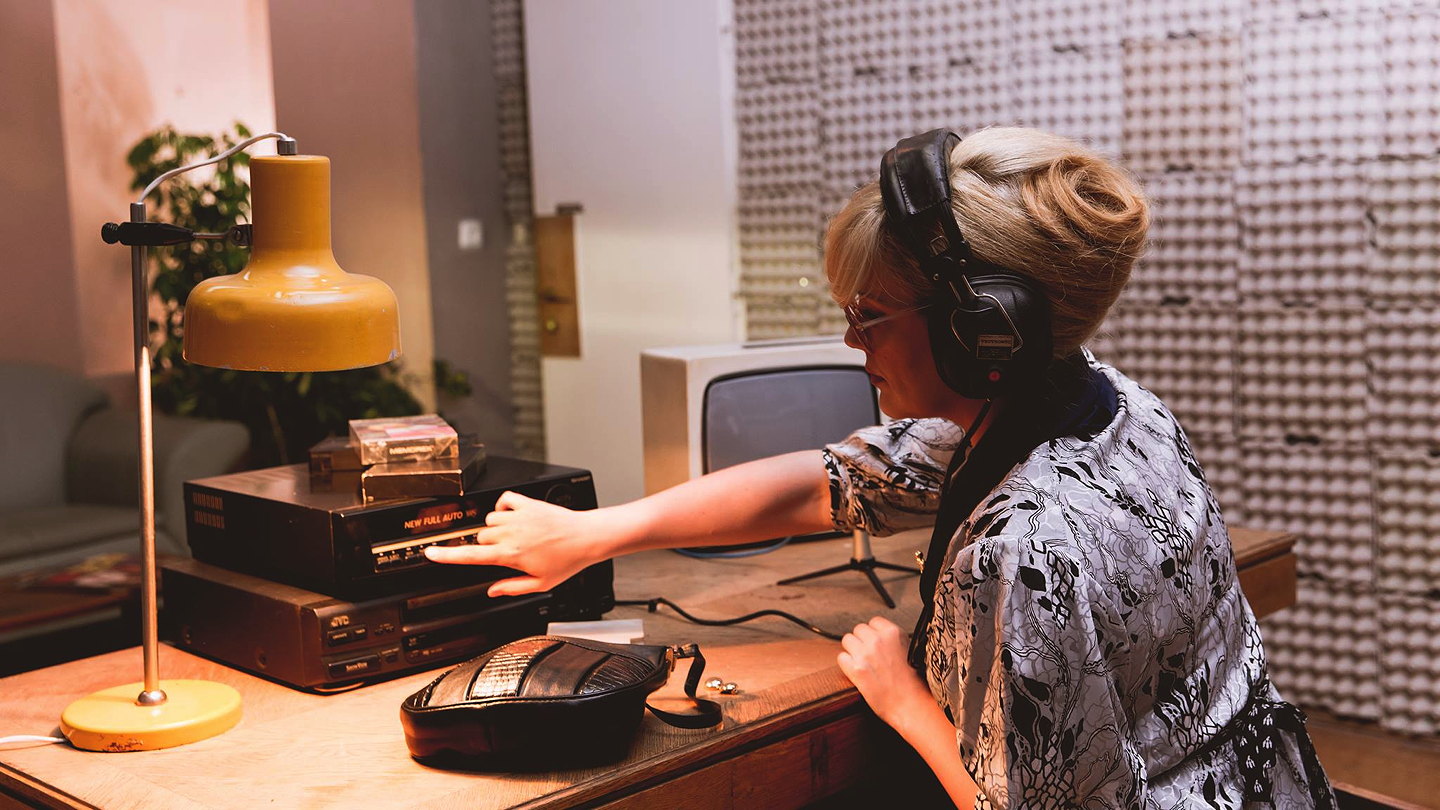 What was your personal connection to the underground video clubs? How do you feel that charged relationship with banned cinema shaped you and your peers as filmmakers?

I grew up in the 80s and my first contact with film was through Irina’s voice. I still remember taking part in group screenings and how I felt like the air in those screening rooms was electrically charged with excitement and anticipation. Whether or not those films shaped me or other Romanian filmmakers is a question that also came up in the interviews I shot. I think for most, it created an excitement for the West and a determination to leave the country if the regime didn’t fall. In terms of filmmaking, in my case I think the films I watched then created a strong affinity for a certain 80s aesthetic.

You ran a couple of Indiegogo crowdfunding campaigns, both of which were only partially funded. How did you bridge the funding shortfall?

We ran both campaigns close to the start of the financing process and they both helped fund short research trips to Romania. The film was fully funded in the end through a combination of broadcasters – HBO Europe, WDR/ARTE (Germany/France) UK Equity, Impact Partners, RatPac Documentary Films and the Sundance institute.

Obviously there won’t have been records of who took part in the underground viewing parties 30 years ago. How did you find your interview participants for the film?

My background is in anthropology, so I started by shooting long, in-depth interviews with as many of those who watched the films. At the beginning I found potential interviewees on online forums, blogs, through acquaintances, with Irina’s help and then continued with a snowball method, because almost everyone over 30 in Romania is emotionally attached to the phenomenon and has at least a story from a VHS screening. I wanted to get as wide a range of participants as possible so as to fully represent the extent and impact of the phenomenon.

You contemplated using animation for the reenactment sections which speaks to their use as subjective narratives rather than illustrative documentation. What made you settle on live action and what was the process of shooting those reenactments vs the interviews?

In the first two years of working on the project we shot interviews. I wanted to find the story. Then my effort was to find the best way to tell it, to bring the decade back to life and to take the audience on an emotional journey. Initially I thought of animation, but Chuck Norris vs Communism is a film about film and the power it has to affect and even change us, so what better way to tell this story than through fictionalised scenes. It became clear to me that live action dramatisations was the way to go and it has been so exciting for the whole creative team to work with this concept and play with referentiality to the VHS films we watched in the 80s.

The interviews were shot on a Canon 5D, they are set in the present and they are in the classic documentary genre, so we felt the 5D was a good camera to go with. For the dramatisations we contemplated the Alexa, but I was never sure of it. I felt like we needed a look that would take the audience back and that would signal that we’re in fiction mode, so we opted for Super 16. It made the shoot much more challenging but it was definitely worth it.

The VHS clips, some of them are digitised from the original tapes, well, the original copies that Zamfir made. I wanted to have these clips in the film to get a real feel for the quality and texture of what we were watching in the 80s, particularly the very degraded image of films that had been copied over and over again. Of course, we couldn’t find all the tapes the interviewees talk about in the film, so we had to use some clips in HD quality and degrade them. The crew at Envy Post Production in London did an amazing job with these. They re-recorded them on VHS and digitised them again. It was all done out of love for the medium.

As the man who smuggle and copied the master VHS tapes what do you think Mr Zamfir’s place in history is – a brave revolutionary or simply a shrewd black-market racketeer?

Zamfir is a very mysterious and controversial character. He was definitely a shrewd businessman and his courage verged on insanity in the way he knew how to play the system. He is one of the pioneers of capitalism in Romania. Weather or not he was a revolutionary is the question that people should debate after watching the film.

The process of arranging the mass of archive clips, interviews and reenactments must have been a daunting task. How did you go about building the film’s structure?

I started working on the structure early on and built a skeleton from interviews. We also took part in DOK.Incubator, a very useful post-production workshop. We weren’t at post-production stage, but we needed it in order to start planning the reenactment shoot. Of course, once in post-production a lot changed. It was amazing working with Per Kirkegaard and the months we spent in the editing room were some of the most intense of the 3 years we worked on the film. It was so freeing to share the material with another pair of eyes and a fresh mind, who didn’t go through all the production adventures but who loved the film as much as we did.

You’ve said that ‘Chuck Norris’ in the title stands as a metaphor for the 80s action film, although Van Damme or Bruce Lee could serve a similar purpose. How much did the meme nature of Norris play into the titling decision?

I think it was about which one of the three starts you mention, and which were the most popular in 80s Romania, embodies the film best. Chuck Norris stands for the all-American hero, and for the Americana that was making its way through the Iron Courtain. He’s still big in Romania and during some of the recent street protests people put up banners with “Chuck Norris come save us”. It’s partly due to the memes, but also because of the films we all watched in the 80s and 90s. 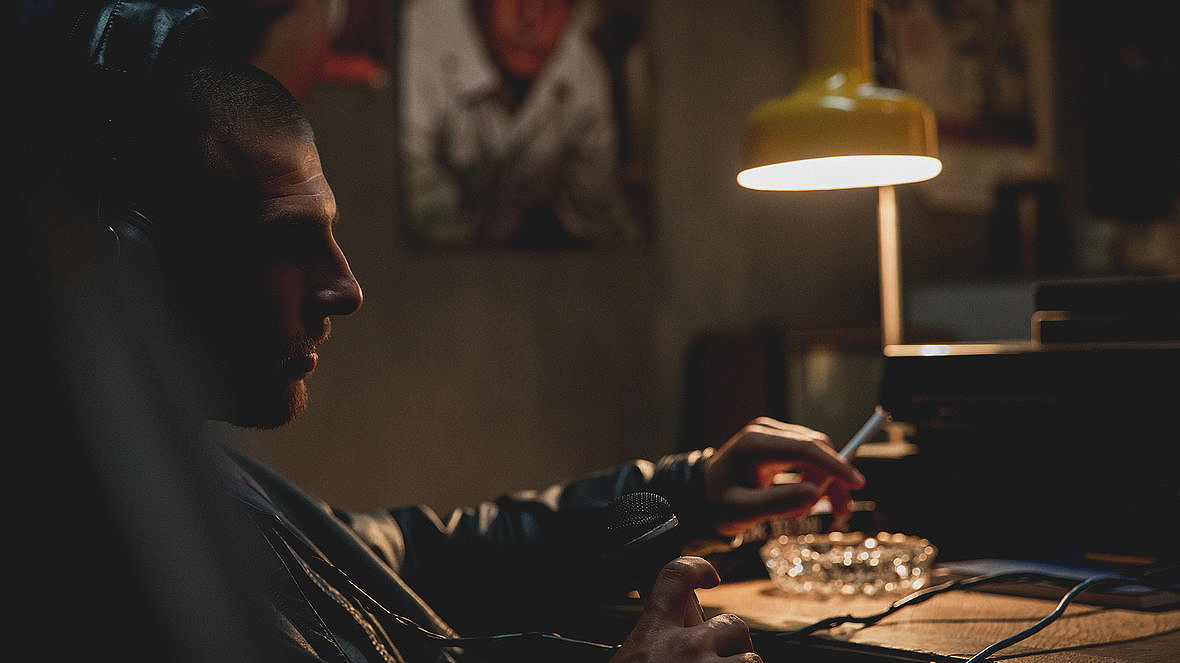 As soon as I saw the final bootlegged clip in the documentary an ‘Of course’ lightbulb went off! Were you ever in any doubt that would be your closing film clip?

Actually yes, in post-production we were never happy with the sequence leading to the Revolution. We kept postponing dealing with it hoping to be struck by a brilliant idea. It was only in the last weeks that we weaved the Rocky clip in. I realised that it perfectly illustrates the galvanising role the bootlegged films played.

You’re exploring both fiction and documentary projects with your producing partner (and sister) Mara Adina, can you tell us anything about what we might see next from you?

I am in development with a feature fiction project and I hope to soon be able to tell you more about it. But I’m not giving up on documentary, we also have a couple of docs in different stages of development.

Chuck Norris vs Communism has its European Premiere at the Edinburgh International Film Festival on 24th and 25th June, and will be released in UK cinemas in September.