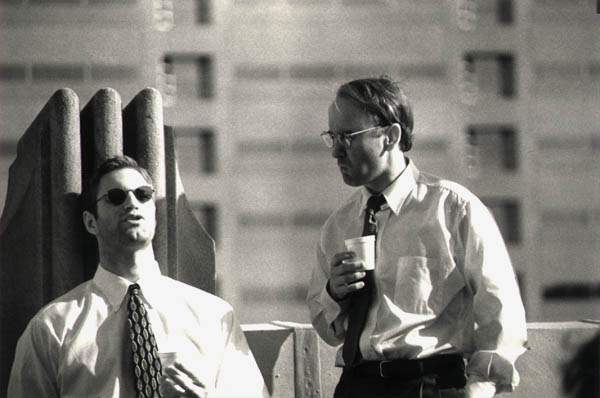 I was surprised to see that one-time independent film pioneer Neil LaBute has attached his name to the remake of the cult 1973 film The Wicker Man, and was instantly sceptical about the need to remake such a popular and well loved film after having to sit through needless other Hollywood horror remakes (The Fog, The Hills Have Eyes and The Texas Chainsaw Massacre). However, just hearing LaBute’s name again (he hasn’t made a film for around three years now), almost instantly sparked replays of his debut In the Company of Men in my mind.

For those of you who haven’t had the pleasure (or, some may argue, intense displeasure) of seeing this film, the plot revolves around two company executives who, on a six week business trip, decide to reek revenge on womankind (in the form of deaf typist pool worker Christine), for all the pain that women have caused them over the years. Many find the film uncomfortable to watch and deem it pointless or cruel. One reviewer claims,“It’s a film that simply showcases human cruelty. And don’t tell me I didn’t get it, cause there was nothing to get.” I for one look at this film as I would a piece of art. It was made to evoke a reaction from its viewer (be it positive or negative), and like most effective pieces of art, LaBute’s film certainly sparks discussion.

In the Company of Men is an example of an independent film made with very little money. LaBute found ways around financial restrictions to create a film full of depth and intrigue that not only achieved financial success but also received critical acclaim. A major factor in this success was not only LaBute’s casting, but the performances evoked from his key players. Thrusting Aaron Eckhart into the lead role of Chad was not only a brilliant decision on the director’s part, but also a defining moment in Eckhart’s career. LaBute knew Eckhart from his time at Brigham Young University, where he had already starred in some of LaBute’s plays. Eckhart’s performance (which was his first on-screen lead role) proves that you don’t necessarily have to pay ‘big bucks’ for a first class performance from your actor. Eckhart managed to bring his character to life, making him charming and likeable one minute, yet pure evil the next. One female viewer even marched up to a somewhat surprised Eckhart in the street one day to declare her hate for him. His performance was rewarded by receiving Outstanding New Talent at the Satellite Awards and ‘Best Debut Performance’ at the Independent Spirit Awards in 1998, which must have gone some way in making up for this previous ear-bashing. Although Eckhart’s performance was the show stealer of the film, it wasn’t LaBute’s only astute piece of casting on a shoestring budget. Both Stacy Edwards (as Christine) and Matt Malloy (as Howard) gave assured performances which added immeasurable believability to the film. Edward’s performance as typist Christine was so believable that I for one struggled with the realisation that the actress wasn’t actually deaf. LaBute not only proved that lack of money needn’t be an obstacle in casting for a movie, but also that working closely with actors can be very advantageous.

The plot of a film is obviously another essential ingredient of filmmaking. With In the Company of Men LaBute had a tried and tested script (his theatre production of the same story had already won awards). His script showed originality and with controversy on its side was bound to attract attention (as well as being an independent filmmaker’s wet dream). This character driven piece required no fancy post-production, special effects, computer graphics, extravagant locations, stunt men or over the top action sequences, which in turn, resulted in none of the excessive spending that is required for the majority of today’s films.

Basing a plot around a minimum budget is no way to go about planning your independent film however – you may end up with not only very little financial output but also very little story. LaBute had the right script for his independent film debut as he had a story he felt passionately about – and this shows. In the end, LaBute shot his film over a total of eleven days and managed to spend only $25,000 (although after it was accepted into the Sundance festival an extra $225,000 was spent on post-production). His ability to keep costs low without having to comprise his vision for the production was instrumental in making the film not only a critical success but also a financial one. The film’s takings at the US box office were impressively close to the $3 million mark, almost ten times the initial output, and LaBute’s production managed to pick up numerous awards on the festival circuit, including prizes at the Edinburgh, Sundance and New York Critics Circle film festivals. Even if as a viewer the film offends you, then you at least have to admire LaBute’s directorial skills. His determination not only shows how we, as independent filmmakers, could go about getting our films made on limited budgets, but also that dedication can get you a long way in this industry – according to Eckhart, “Neil even mowed the neighbor’s lawn to help finish the film.”