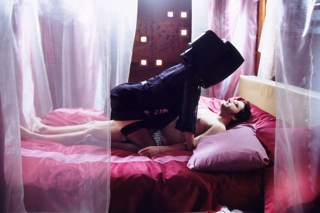 Remote tells the story of an amalgam of the fairer sex and TV. Despite the modest £1000 budget, director John Burns was confident the 90-second film could be realised on Super 16mm, until disaster struck: “The producer pulled out three days before the shoot and we realised she hadn’t organised anything in the month of pre-production; it was up to myself and production assistant Sagar Shah (promptly promoted to producer) to assemble the film from nothing in three days.”

The production transformed a room in Shah’s aunt’s house into a decadent boudoir, careful to cover up actors when she was around, as the room was normally used for weekday prayers. As Burns had never used bluescreen before, Russell Stopford at Magic Lantern was consulted prior to filming about the complexities of getting the female lead’s face to play like a programme on her TV head. This necessitated the sourcing of three identical TV sets, only one of which needed to work. Pre-shot DV content was filmed off the working set in Super 16mm, using a phase corrector to remove the phase bar. On set, actress Frida Show’s reactions were filmed from the same set, displaying the output of a DV camera she was positioned in front of. Her actions were then timed from the best take of her wearing the mask.

“It was difficult for Frida to do first one take with just her body (not moving her head) and then another with just her face (not moving her body). The other two TVs were cannibalised to make two fronts and backs of a TV head construction. This was built around the production designer’s cycle helmet and allowed the actress to just about move, although it was very heavy. For a couple of the shots she had to have a blue screen where the screen would be and this meant she couldn’t see what she was doing at all. In post we overlaid the 16mm footage of her face onto the TV mask using the corners of the TV to track it in After Effects.”

Remote has featured in a number of festivals as well as an Underground Films DVD and the British Council represented it in Cannes. You can watch Remote as well as a host of Burns’ movies over at Big Red Button.