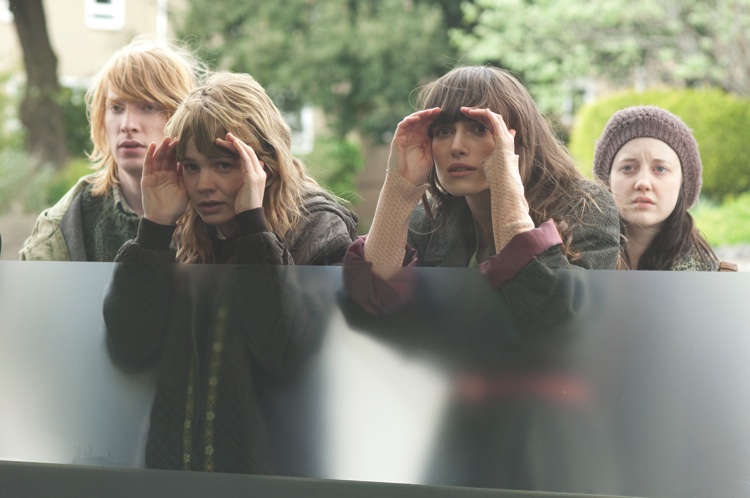 Opening this year’s London Film Festival is Never Let Me Go, a the screen adaption of Kazuo Ishiguro’s internationally acclaimed novel of the same name. A story of love and betrayal, humanity and fate, set in a world that has learnt to clone itself, Never Let Me Go is far from your typical sci-fi movie, centred as it is instead on the tangled love triangle between three childhood friends and the question of human fragility.

Directed by Mark Romanek, this emotional story takes us on a journey that leaves you asking, what is it that makes us human? Beginning in the deceitfully beautiful location of an English boarding school known as Hailsham, we first meet our main characters as children. Kathy (Carey Mulligan) is a particularly smart child who befriends Tommy (Andrew Garfield). The connection between the two is quite obvious to all at the school, however Kathy’s best friend Ruth (Keira Knightly) manages to drive the attention of a very shy Tommy onto herself. We follow the threesome until they leave Hailsham, having eventually learnt of the haunting secret of their near future.

The performances are impressive, particularly Carey Mulligan our lead, who narrates throughout, first introducing herself as a ‘carer’;  an occupation whose real purpose becomes clear as the film unfolds. Her, in many ways minimalist performance could not be further from cliché, making the character her own with heartfelt effect.

The picture is beautiful, shot by director of photography Adam Kimmel, never has sci-fi looked so romantic. Production designer Mark Digby and costume designers Rachael Fleming and Steven Noble create a flawless little world that’s believable and very easy to fall in love with. I’ve read the production design of the film was a very conscious decision by director Mark Romanek. A fan of the book before he was asked to work on the project, he wanted to stay as close to the world Ishiguro had so carefully written, a world very similar to our own, yet not our own at all.

One of my favorite aspects of Never Let Me Go was the feeling of sharing a journey with the characters. The slow release of information was not only withheld from the audience, but also from the characters themselves. Meeting the threesome so young, when they’re full of innocence and know nothing of their fate, helps us relate to them as we share similar feelings as our knowledge grows. At points I found it frustrating, asking myself why they wouldn’t run away from their predicament? It wasn’t until I reflected on the film in hindsight that it became obvious that was never an option for them. They’d been brought up to follow what they know and although they appear and act as normal human beings, they realistically had nowhere and no one to run to.

Never Let Me Go is a film that doesn’t conform to the norm. There’s no happy ending for one. It’s a deeply emotional film that brings up many questions of morality, yet in the same breath is simply a film about life, love and death, all captured beautifully with a wonderful soundtrack.