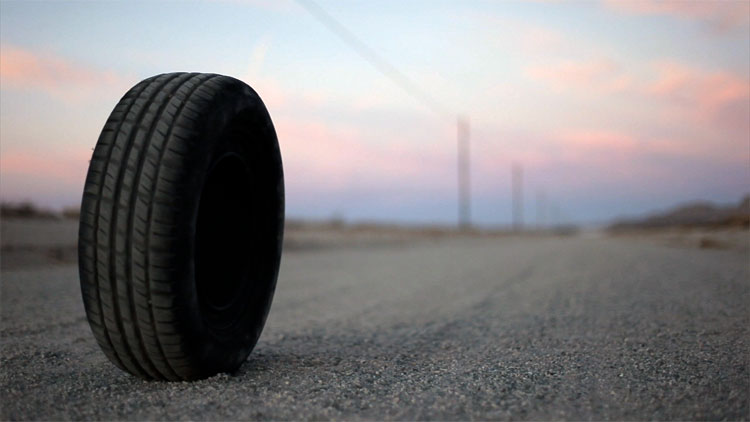 Rubber opens with a shot of a chair nestling in the wilderness of an unknown American desert, the following shots reveal more chairs spread randomly across a dirt track and a man waiting, holding numerous pairs of binoculars. Down the track comes a large American car which weaves its way towards camera, purposefully knocking down every chair in its way, before skidding to a halt. Out of the boot of the car emerges a state trooper in full attire, topped off with mirrored aviator glasses. The trooper marches towards the front of the car, collects a glass of water from the driver and continues to walk straight towards the camera’s gaze. Settling in a mid shot, with the car and desert perfectly framed behind him, the trooper begins addressing the audience…

“In the Stephen Spielberg film ET, why is the alien brown? No Reason! In Love Story, why do the two characters fall madly in love with each other? No Reason! In Oliver Stones JFK, why is the president suddenly assassinated by some stranger? No Reason! In the excellent Chain Saw Massacre by Tobe Hooper why don’t we ever see the characters go to the bathroom, or wash their hands like people do in real life? Absolutely No Reason! Worse, in The Pianist by Polanski, how come this guy has to hide and live like a bum when he plays the piano so well? Once again the answer is No Reason! I could go on for hours with more examples, the list in endless, you probably never gave it a thought! But all great films, without exception, contain an important element of No Reason! And you know why? Because life itself is filled with No Reason! Why cant we see the air all around us? No Reason! Why are we always thinking? No Reason! Why do some people love sausages and other people hate sausages? No Fucking Reason!” 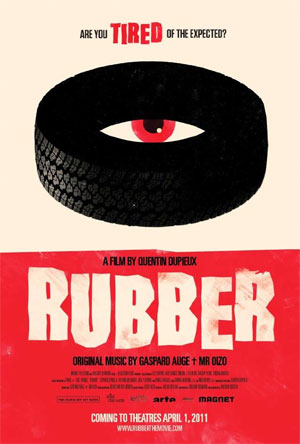 The car horn beeps and the driver shouts, “Come on don’t waste your time explaining that garbage, lets go!”

“Just a minute, let me finish.”

“Ladies, Gentlemen, the film you are about to see today is a homage to the No Reason, that most powerful element of style!”

The trooper continues to stare down the barrel of the lens, before emptying his glass of water on the floor. The shot changes and we see an audience watching the trooper, he climbs back into the boot of the car and it drives away. The man holding the binoculars then distributes them to the group, instructs “everybody to turn around” before finally telling them to “enjoy”.

In the realm of film openings, they don’t come much more bizarre or memorable than the opening 5 minutes of Quentin Dupieux’s third feature Rubber. I’ve always believed the opening 10 minutes of a film are probably the most important of all its duration, as this is where its viewers can very quickly be won or lost. Dupieux’s film not only manages to begin in the most intriguing of ways, but also sets the tone for the rest of Rubber’s duration.

In essence, Rubber is the story of a killer tyre that sets off on a mission of destruction, using its psychokinetic powers to annihilate all in its path. It’s a concept as weird and as ludicrous as they come, but as Stephen Spinella’s Lieutenant Chad highlights early in the film, is it any weirder than Spielberg’s ET, one of the most popular films of modern times?

Originality is something that is pretty hard to come by in the feature film industry and it’s not often you come away from a film feeling you’ve truly seen something fresh and innovative. However, this is exactly the feeling I had after viewing Rubber. Feeling like a cross between an extended music video, a B-movie and experimental audio visual project, Dupieux’s film not only manages to be playful, thought-provoking and inventive, but also hugely entertaining. It’s surprising to think that the man responsible for releasing the Levis promoting Flat Eric onto the world, would release one of my favourite films of 2011 so far and if you asked me why I loved Rubber so much, I’d simply have to reply No Reason!