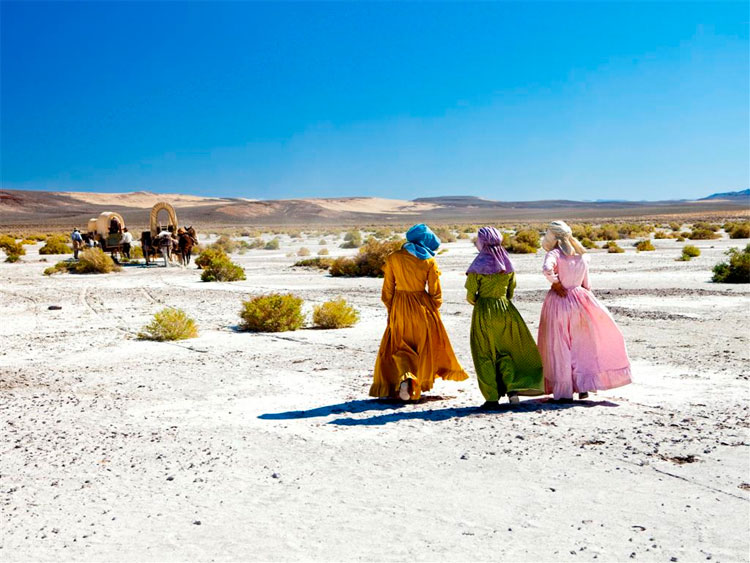 Pace can all too often be an under-valued tool in the world of filmmaking with the speed at which a narrative unravels regularly a deciding factor in a films success. The pacing of a film can often tell the audience a lot about a director and the way they not only work, but also view the world. When I watch the films of Kelly Reichardt, I instantly envision a director in control and a filmmaker determined to work within her own guidelines. Her films never seem rushed and although often minimalist in content, they portray a message with great confidence and self-belief. With her third feature, Meek’s Cutoff, Reichardt employs long takes, a sparse soundtrack and an unusual shooting style to once again make one of the most interesting and powerful films you are likely to see all year.

The year is 1845, the earliest days of the Oregon Trail, and a wagon team of three families has hired the mountain man Stephen Meek to guide them over the Cascade Mountains. Claiming to know a short cut, Meek leads the group on an unmarked path across the high plain desert, only to become lost in the dry rock and sage. Over the coming days, the emigrants must face the scourges of hunger, thirst and their own lack of faith in each other’s instincts for survival. When a Native American wanderer crosses their path, the emigrants are torn between their trust in a guide who has proven himself unreliable and a man who has always been seen as the natural enemy – meekscutoff.com 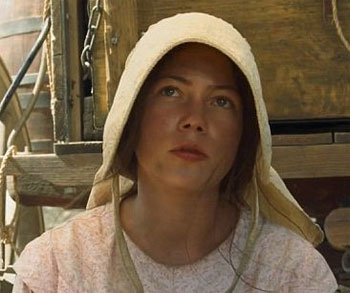 Meek’s Cutoff is brimming with strong performances, with every actor in this small ensemble adding multitudes to the film’s feeling of despair and helplessness. Scenes are stolen by the resolute acting of Bruce Greenwood, Zoe Kazan and Rod Rondeaux, but the film belongs to Michelle Williams, whose stoic performance as Emily Tetherow pulls the film forward, as if she were one of the oxen pulling a wagon across the treacherous landscape. After winning plaudits for her ‘bare all’ performance in the heartbreaking Blue Valentine, Williams, returning for her second Reichardt feature (her first being the subtle ‘girl and her dog’ tale Wendy and Lucy), shows once again why she is one of the most exciting actresses working today. Managing to flaunt unwavering willpower one moment and a brittle delicacy the next, her performance elicits engagement from the audience, as you will her on in her quest and hope for her decisions to be good ones.

Adopting a 4:3 ratio for the shoot, Reichardt’s film instantly takes a contrasting visual style from its predecessors and what could have been a film of wide-open space, is suddenly a film of claustrophobia and introspection. Westerns have become synonymous with sprawling panoramas throughout the years and with a film taking place on the Oregon trail, you would have expected never ending widescreen backdrops to be displayed across the full extent of the screen. However, we are instead presented with a narrow view of the travellers’ world, always feeling like there is something just out of sight, waiting to come into shot. It’s an unusual aesthetic decision from the director, but one she rationalizes incisively:

I felt like the square [aspect ratio] gave you an idea of the closed view that the women have because of their bonnets. You’d be traveling in this big community where you’d never have privacy. But also, it’s a really lonely journey. And I think cutting out the peripheral, it does leave you with the idea that something could be there that you don’t know about — and so it offers that kind of tension. – Going West: The Making of Meek’s Cutoff

The format and framing of her film was not Reichardt’s only brave decision, with the director opting to tell her story through the eyes of the female characters in the film. Woman are often seen but not heard in the Western and apart from the odd exception, their role in this genre is usually restricted to whore or homemaker. Reichardt has decided to reverse this portrayal in her alternative take on the Western film, by making the male characters the ones who are literally seen but often not heard. The camera and the microphone never stray far from the three women folk of Meek’s Cutoff and as the men gather to discuss solutions for their impending fate, we are left with the females of the pack, gazing on the debates from afar and only picking up whispers of the conversation.

Even with her stock rising and her reputation growing, Reichardt doesn’t fall off the wagon and begin pandering to mainstream expectations and conventions. Like her previous two features Old Joy and Wendy and Lucy, Meek’s Cutoff is a reflection of the kind of director Reichardt is and her brave decision-making once again radiates throughout. It may be a film too minimalist in content for some, its ending will leave many frustrated and unsatisfied, but there is absolutely no denying what an assured and confident piece of filmmaking this is.

And don’t let its embroidery and small frame convince you otherwise!