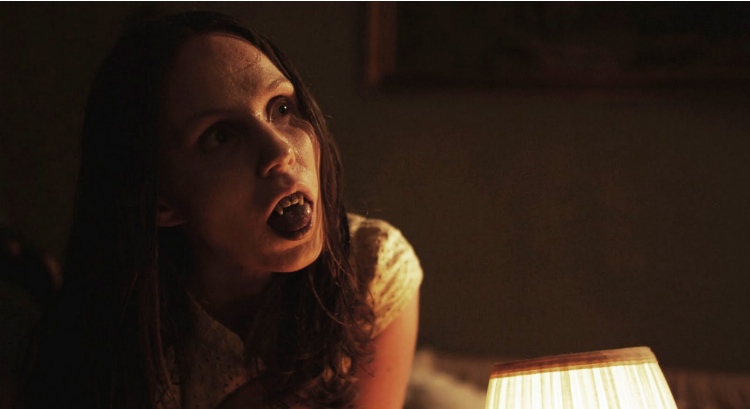 In Stake Land teenage boy Martin (Connor Paolo) sees his whole family slaughtered by a vampire before being rescued by a rogue vampire hunter only known as “Mister” (Nick Damici), who takes him under his protection. As the world is succumbing to an unexplained vampiric epidemic and civilisation crumbles around them, they travel towards Canada, with the fleeting hope of reaching a safe shelter, free from the undead. They come across a few survivors along the way, living in isolated communities, as well a group of religious fanatics who believe the vampire plague is an act of God.

The undead apocalypse scenario has become a staple of horror movies for the last few decades. However this time, it’s not zombies who bring the end of civilisation but vampires, who have seldom featured in similar stories, with a few exceptions such as the recent underrated Daybreakers. And so it is all to the credit of director Jim Mickle going for an original and personal style in this his second feature, displaying a lot more ambition than we regularly expect from low budget horror, and earning the Midnight Madness award at the Toronto Film Festival last year. The title and basic premise might make this sound like a Zombieland rip-off, yet this is where the similarities end. The tone is relentlessly downbeat and the lack of modern artifice means the film has a lot more in common, in style and pace, with the gritty George A. Romero and John Carpenter movies of the 70s and 80s than recent horrors. Yet Stake Land doesn’t fall in the trap of being too reverential a tribute and is very much its own film, earning its place as one of the few recent and truly independent horrors worth watching.

There is not the slightest trace of irony and the film purposefully shuns cheap jump scares and CGI, favouring instead a fantastically atmospheric approach. This is largely thanks to Ryan Samul’s assured and stunning photography and the grim scenery, channelling some Southern gothic in the earlier scenes before moving on to more desolated landscapes of the North, reminiscent of the recent apocalyptic laugh-a-minute, The Road, with an ever present and suitably melancholic score adding to the atmosphere. 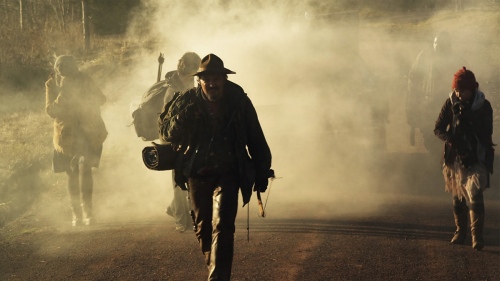 However, these strengths are also the cause of some of the film’s weaknesses. In keeping with a more realistic tone, there is no easy resolution to aim at as the characters travel towards an uncertain destiny. And unfortunately with no clear goal comes a lack of narrative drive, which makes the story feel rather episodic. As for the two leads they are also slightly problematic. Although thankfully not presented as cartoonish, wise crack figures with knowing jokes and kick-ass action scenes as in so many sub-par additions to the genre, for a film that favours a more serious approach there is surprisingly little characterisation. Paolo and Damici might play things weary and introspective as dictated by the script, but they simply lack the presence and chemistry needed to make their characters truly come to life, and their dynamic as adopted father and son believable.

The standout performance however is given by one time 80’s star Kelly McGillis in a supporting role as a nun who joins them along the way. She brings emotional depth and warmth as a tormented soul still trying to stick to her original moral compass in the face of the horror around them. There is also a decent turn by horror favourite Danielle Harris who is sadly not given enough to do, but still manages to bring heart and hope among the desolation.

All this is not to say that Stake Land is boring in anyway. It might move at a more considered pace than we’re accustomed to for the genre, yet we are thrown in the thick of the action within minutes, with a gruesome opening scene featuring an infanticide that sets the desperate tone to follow. Vampires might be in vogue right now, but these are absolutely nothing like the recent crop from True Blood or dare I say Twilight. They are mute and savage beasts, who actually have a lot more in common with the infected and ‘fast’ zombies of classics such as 28 Days Later and the Dawn of the Dead remake, with added fangs. Make no mistake, this truly is a horror film, with enough graphic violence to satisfy gore-hounds, although it’s never dwelled upon, presented instead in short, sharp outbursts.

Despite its flaws, this is an assured example of how an ambitious vision can elevate the horror genre above the drivel we horror fans too readily accept. After his intriguing debut Mulberry Street (a tiny budget shocker about mutated part human/part rat creatures) and now Stake Land, director Jim Mickle is certainly a talent to watch.