Ever since it started out with a programme consisting solely of documentaries back in 1947, EIFF has always retained a special interest in non-fiction work, and this year was no exception. Indeed, buzz amongst the delegates seemed to suggest that the strength of this year’s programme lay, if anywhere, in its two documentary strands (‘UK’ and ‘International’). Interestingly, three of the documentaries I saw focused on the same topic: artistic creation and the life of artists. 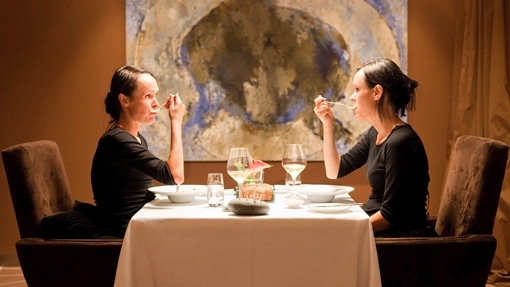 The first, L.A. Raeven – Beyond the Image, was, for me, ultimately the least engaging. Focusing on the life and work of video and performance artists Liesbeth and Angelique Raeven, the piece begins with a striking shot of the twins bickering while sat in front of a mirror: the camera roams from one to the other while the mirror adds a further level of twinning to the already identical women. It’s a fitting start to the film: just as the sisters themselves seem to be defined by their twin status, so too will the theme come to dominate this focused character study. Later in the film the women begin work on an installation piece which aims to shred the image of ‘cute twins’ and show the difficulties that being a twin presents, and more than anything it is this which rises to the surface. Take, for instance, the sisters’ explanation of their eating disorder, which arose out of an extreme sense of sibling rivalry: both sisters feared becoming the bigger of the two and therefore tried to make sure they were eating less than the other, resulting in anorexia. They ultimately agreed that they would always eat exactly the same amount, and this illustrates perfectly how intrinsically linked the two women appear to have become. Each admits that they find it hard living apart from one another, and the sense of tension between them is palpable when Liesbeth gets a boyfriend. Despite director Lisa Boerstra focusing more on the Raeven’s lives and working practices than their themes, it becomes clear that their own experiences dominate their intensely personal work. Boerstra’s focus, however, may also be the film’s ultimate undoing: whether due to her fairly conventional approach to documentary form, the lack of a clear narrative or thematic thrust to the piece, or the personality of the artists themselves, the film never quite fully engages or provides quite enough depth to really sustain its slender 73 minute run time.

The same cannot be said, however, for Dominic Allan’s excellent CALVET, which grips right from the off and contains several sequences of extreme dramatic tension. Very much in the same mould as Boerstra’s film, CALVET is, formally, a rather conventional documentary exploring the life and work of the French artist Jean Marc Calvet. However, what makes Allan’s piece such an enthralling experience is the figure of Calvet himself. In Calvet, Allan has not only uncovered a great character, but also a great storyteller – and, as a result, Allan is able to step back and allow Calvet to tell his story in his own words. Thus, the film plays out as a shocking confessional. Calvet has stated that he paints in order to ‘vomit’ up his demons (“it’s like a tennis ball stuck in your throat and it has to come out“), and the film is a logical extension of this: an even more direct way to purge his conscience and make amends for the mistakes of his past in which he was, as he puts it, “the perfect example of a total bastard“.

The start of the film finds Calvet living and working in Nicaragua. In his typically enthusiastic and animated way he talks to school children about one of his paintings, explaining that it represents him and his son. He tells them about a day when he dropped his son at school in a hurry, rushing him out of the car and into the school ground. If it happened today, Calvet continues, he would take the time to savour the moment. As he explains to the camera shortly afterwards, years ago Calvet walked out on his child (and his wife), and disappeared. He hasn’t seen or heard from them since, and the sense of regret at his actions is written clearly on his face. The reason for his disappearance was ostensibly a job working for a man who later turned out to be a mobster, but it also seemingly stemmed from a self-destructive urge embedded deep within Calvet – the same urge, no doubt, that had led him to flee his angry, arguing parents and become a homeless, drug-addicted rent boy while still in his teenage years. Calvet’s narcotics addiction only increased in the years to come and this, along with the paranoia he felt after stealing money from the mobster and running away, resulted in a three month self-inflicted, drug-fuelled hell which, miraculously, exploded into his passion for painting. When Calvet talks of ‘vomiting’ his paintings, you can tell he means it: for him, painting is therapy. Covering the canvas is his catharsis. It’s become an obsession, a lifeline. Not painting makes him nervous.

The film shifts gears around half-way through, from being a retelling of Calvet’s life story to being a search for his son, but it becomes no less enthralling for it. At one point, Calvet states that “maybe family is just a dream, but I want to believe in it“. Indeed, he has remarried and is playing father to his wife’s deaf-mute daughter whose Dad, he says, never looked after her. One can’t but feel that here Calvet is trying to make up for lost time, looking after the girl as much out of a sense of regret and repentance as love. Despite his past misdemeanours, there’s no denying Calvet’s outright likeability, and his winning personality and fascinating story made this intense character study one of the highlights of the festival.

Another festival highlight was the third, and most extraordinary, of the artist documentaries: Convento. It’s scrumptiously stunning photography and languid pace place it in an entirely different realm from the other two documentaries. Tuning into the ‘frequencies’ of the ‘ancient energy’ of the convent São Francisco de Mértola are Geraldine Zwanikken and her two sons Christiaan and Louis. Little more than a ruin when the Zwanikken’s moved in, the convent now contains forty hectares of biological gardens and functions as an artistic studio. Reportedly built to house relics of Jesus’ cross, along with a fragment of his purple robe, the 400 year old building was a working convent (housing an abbot and twelve monks) until the middle of the 19th century. Now, in addition to the Zwanikkens, the grounds are populated by Christiaan’s incredible ‘kinetic sculptures and creatures’, which mix real animal bones with mechanical frameworks. These absurdist creations provide the film with many of its best sequences and plenty of sly humour (if you see the film, make sure you stay until the end of the credits!). There is an especially mesmerising sequence focusing on Christiaan’s mechanical donkey, which now powers the convent’s irrigation system. Christiaan refers to the piece as a homage to both the donkey he had as a child and to the history of the system, once powered by a real animal. In fact, Christiaan’s creations are repeatedly contrasted with living creatures, and the film thus presents a powerful meditation on the mechanics of life versus mechanical life. Despite its simplicity, the film feels incredibly rich. Perhaps this is a reflection of the Zwanikken’s collective artistic talents (the work of Geraldine and her late husband, Kees, is also explored in the film), but surely also of Jarred Alterman’s, who served as director, producer, cinematographer and editor on the film. There is also a very effective and evocative use of music in the film.

Unlike Beyond the Image and CALVET, Convento makes little use of talking heads, the interviews instead heard mainly in voice over – and when the speakers are shown, they are always engaged in one activity or another (cooking, cleaning the pond) rather than sitting and talking. At times there’s a sense of mystical pretension in the Zwanikken’s commentaries (Geraldine states that her children “don’t treat me like a mother, and I don’t treat them like my sons. We are entities together who are in this life at this moment“), but somehow it all seems fitting to the mood and tone of the piece. Towards the end it’s commented that the convent is “a building and we are living“, and that they don’t have to keep it. But on the strength of this documentary, and the work they are producing inside it, one can only hope that they do. [Listen to our Jarred Alterman interview]

Likewise, one can only hope that Edinburgh keeps supporting such rich and powerful documentaries.