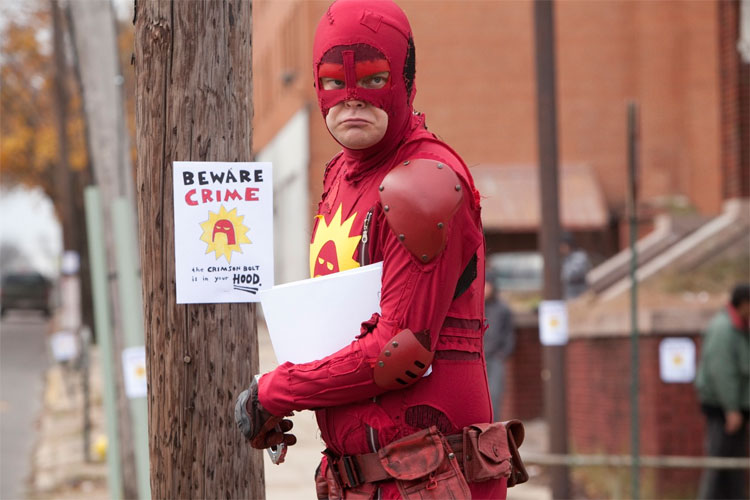 With Marvel Films currently dominating movie screens around the world, the super hero film is definitely in vogue with cinema goers at the moment. This summer has already seen Thor, X-Men: First Class and Captain America: The First Avenger dominating a huge percentage of the schedules at the big screen, but somewhat lost in the grandeur of these releases was James Gunn’s SUPER. Following in the footsteps of Kick-Ass, Scott Pilgrim vs. the World and Defendor, this isn’t a film about super human powers, but instead the story of an everyday man using a super hero guise to solve his problems and get his life back on track.

After his wife falls under the influence of a drug dealer, an everyday guy transforms himself into Crimson Bolt, a superhero with the best intentions, though he lacks for heroic skills (IMDB)

Whether chosen by the hand of God or inspired by a psychotic episode, Rainn Wilson’s Crimson Bolt doesn’t adhere to the usual super hero conventions. His handmade costume is scruffy and ill-fitting, his weapon of choice is an everyday wrench and his catchphrase “Shut up crime!” reveals all we need to know about his powers of thought. This is one costumed crime fighter who often runs away from danger, will attack innocent bystanders without a second’s thought and often curl up into the fetal position and cry like a baby. It’s the Bolt’s penchant for violence and Gunn’s depiction of it that’s most interesting in SUPER, switching from whimpering wimp to callous crusader in the blink of an eye, Wilson’s masked avenger bludgeons all that stand in his way. Like the character he’s created, Gunn certainly doesn’t hold back; the Bolt’s violent attacks are punctuated with comic book flashes and on-screen ‘Ka-pow’s’ juxtaposing the graphic nature of the scenes, as Wilson splits skulls and collapses heads with his trusty wrench. There’s truly nothing admirable about Wilson’s Frank and his Crimson Bolt alter ego, Gunn’s portrayal of his protagonist is raw and uncompromising ensuring this is one super hero you won’t want to be.