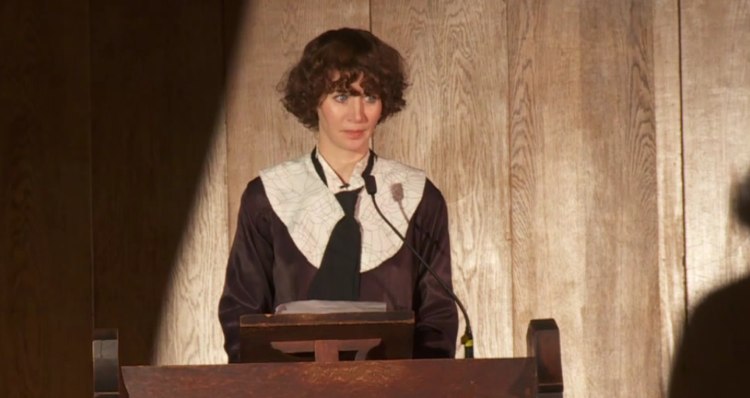 Have you heard of the School of Life? No, no. Not the one everyone talks about when something goes horrifically wrong and your only saving grace is that you’ve learnt something. I mean The School of Life. No. I hadn’t heard of it either. Until Miranda July popped along to the Conway Hall to talk about strangers. The School runs a plethora of sermons on a Sunday, dinner during the week and general lessons on, yes, ‘life’.

Miranda July is probably as multi-faceted as the courses the School run. In my opinion, she is driven by a need to express herself in any way she desires. She has directed a feature film, You, Me & Everyone We Know with her second, The Future due for release in the next few weeks. She has also written both fiction and a book using material from her former website which ran for a few years.

In light of what she does and her imagination I was very excited to go and see her with my friend MoneyBen (who is a July-phile if ever there was one). We arrived 30 minutes early to an already quite enormous queue. The saving grace was Jarvis Cocker parking his Jag nearby and sauntering to the front of the crowd.

As we entered the hall we were greeted with the most enormous individual who was dressed as the devil. He kindly showed us to our seats and we waited for the sermon to begin. As July hit the stage she started to talk about strangers. So far, so expected. Then she requested that we grab the arm of the nearest stranger and hold on to them and look deep in to their eyes. She then explained how perhaps this stranger might run into us later in life or how our kids may end up marrying each other. Letting go after slightly longer than necessary I expected her to continue her sermon. But she did not.

July had been in to the crowd earlier and obtained objects from three different individuals. Upon the stage was a very small turntable upon which she placed the object and turned on a video camera. The owners then came forward and spoke to her, firstly about their objects and then meandered through their lives. The important thing was the absence of the typical mundane questions asked of strangers; ‘What do you do?’, ‘Where do you live?’ etc.

The first stranger was Australian and had wandered around Europe with an intention to return to Australia one day. His object tweezers, are carried around in his bag and deployed on his stubbly beard so it’s a perfectly straight line. Yes. Mental.

The second stranger was excruciating. By this point the other strangers knew what was coming. Her answers were evasive and when pushed she imparted that she hadn’t spoken to her family for two years. Why? We’ll never know, they had had an argument. It was evident she was not comfortable on stage and equally July was uncomfortable having strayed in to territory which was making her stranger squirm. Her object was Palmers Cocoa Butter Lip Balm. Chocolate flavour.

The last stranger was the most uplifting story of all. A man who was carrying a card that his daughter had made him to celebrate his 60th birthday. She had purchased tickets to a month’s worth of sermons in which Miranda July fell. He had been with his wife for forty years (which prompted applause) and marriage was easy. It’s when you hear stories like that you hope that maybe the future is full of loveliness.

After each stranger had spoken July auctioned the objects along with a signed certificate setting out how the new owner had obtained it with the signatures of July, the former owner and the new owner. The bidding became a bit frenzied. Put it this way, would you pay one hundred and fifty quid for some manky beardy tweezers? But the best part of the auction was the lady who purchased the birthday card. It was clear that both father and daughter were a bit sad to see it go. So the lady who won gave it back to them.

And then we all put our heads in between our knees and closed our eyes while Miranda explained how the funds the auction had raised would have once been a lot of money to her. Perhaps even the difference between making rent and not making rent. And so she asked if there was anyone who really needed the money – really, really – and if so, to put their hands up and she’d hand over the cash. For their own privacy we’d all stay as we were, eyes closed.

And someone put their hand up. I’m not sure who. I’ve told this story to lots of people since and I tend to get met with a cynical look and a sympathetic smile. Especially at work. It’s written all over their faces, ‘Quirky old Subs, believing in humanity‘. But honestly. That morning in Conway Hall I have never been more certain that the person that received that money really needed it.