After yesterday’s jam packed and very insightful sessions I awoke slightly jaded and had to energise myself with less chocolate and more fruit for breakfast. Some new characters arrived at the breakfast table and transpired to be the latest Masters to lead the fresh new breed of Masterschool pupils.

Our day started with an introductory talk by Richard Bradley from the very reputable production company, Lion TV, who have offices in London, New York and China. Richard built on many of the subjects Tom talked about yesterday, regarding the importance of the story in your pitch and throughout your film.

He talked of the three most important pillars of documentary:

We were encouraged to think about what may not happen in the film, as opposed to what would, and the consequences of this. Richard also talked about the important, but often forgotten, middle section of the film, or as he described it, the ‘meat and two veg’. This middle section is what keeps the audience engaged and should be where the tension mounts. 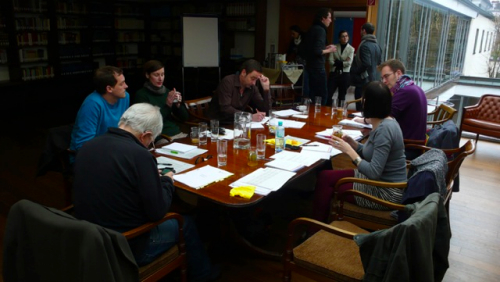 Anna and I were in Roger’s group first. Roger is an incredibly experienced documentary filmmaker who has made films for most international channels. The session was fantastically productive and enlightening for all of the filmmakers. We were invited to deliver our Elevator Pitch. The term is in reference to stories that Alfred Hitchcock would tell in an elevator. His storytelling and delivery was so refined that after only travelling four or five floors people were compelled to remain in the lift to hear more…

“…then he grabbed the knife and held the woman by the throat and…” (an example of a Hitchcock elevator pitch, massively paraphrased)

We took it in turns to pitch our projects, after which each was interrogated by Roger and the rest of the group with an emphasis on the forensic analysis of what the story might be. This fed into what Tom’s comments about the archetypal story of the films. For us, at this stage, we feel that the story of Paa Joe trying to secure a future for his family is the ‘archetypal’ story. We came away from the discussion realising that we need to begin to imagine and prepare for the ‘hinge’ moments in the film; what are the specific threats to Paa Joe, our film’s protagonist?

The afternoon session was lead by Richard Bradley, with Mark Atkin. We heard from other teams whose pitches we hadn’t yet heard. One being Wild Moves. It’s no secret that Anna was enamoured by the project’s director and presenter, Giuseppe Bucciarelli, and by the end of the session I think the entire group felt the same way.

It was heartening to hear that Richard already had a knowledge of Paa Joe: Dead not Buried, and in fact, Roger had mentioned in the morning’s session that he had wanted to make a film about Paa Joe some years ago but hadn’t found the story. He was incredibly pleased to tell us that he thinks we have now found that story.

We finished the day at a restaurant called Roxy for fodder, weissbier and internet connection for our only night off this week.