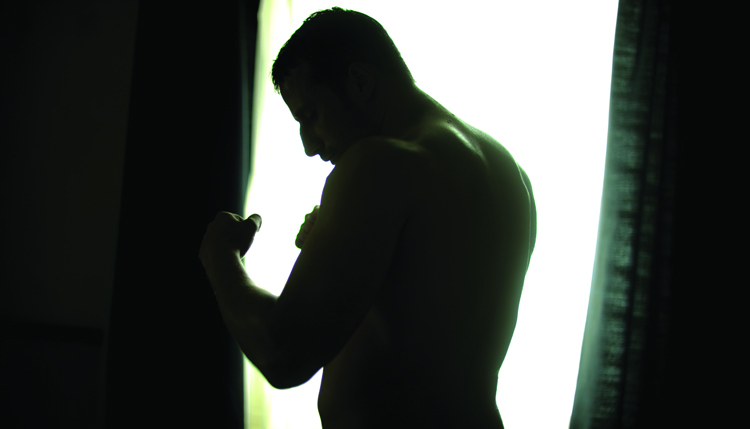 Whilst the story of a young Belgian cattle farmer may not instantly sound like the kind of film you’d rush to see, a nomination for an Academy Award in the Best Foreign Language Film category (selected by Belgium ahead of the Dardenne brothers’ latest offering) and a host of positive reviews have certainly started to generate a buzz for Michaël R. Roskam’s debut feature Bullhead (Rundskop).

Domineering cattle farmer Jacky Vanmarsenille (Matthias Schoenaerts), constantly pumped on steroids and hormones, initiates a shady deal with a notorious mafioso meat trader. When an investigating federal agent is assassinated and a woman from his traumatic past resurfaces, Jacky must confront his demons and face the far-reaching consequences of his decisions.

Listing the Coen brothers, Akira Kurosawa and Quentin Tarantino as “the main references for my filmic universe” in his Bullhead director’s statement, Michaël R. Roskam may have set himself some prestigious peers to emulate, but from this early showing it’s easy to see why Variety labelled this young Belgian director as one of its 10 Directors to Watch in 2012. It’s Roskam’s fascination with American gangster films that shines through in Bullhead, although the film plays much more like a Martin Scorcese influenced flick than any of the aforementioned filmmakers. Notions of loyalty and revenge are played out within the Belgian cattle trading community almost as if this on-screen world was simply an extension of the Brooklyn based one depicted in Goodfellas. Bullhead shies away from the blood-soaked violence prevalent in its American counterparts however and extracts the gun-toting masculine world full of infidelity often encountered in gangster films, and instead presents an opposing view where struggles with masculinity and sexuality are key.

“Bullhead is a film about people being driven to extremes. it is not about cowboys and indians, about good or evil, but about how seemingly small events can sometimes have huge consequences for the people involved. Their fate is also their destiny.” – (Michaël R. Roskam on Bullhead)

Despite the confident filmmaking on show in Bullhead, technical prowess isn’t the only aspect of Roskam’s debut which leaves a lasting impression; a powerhouse lead performance from Matthias Schoenaerts continues to gather critical acclaim – including the Best Actor prize at Palm Springs IFF 2012. Roskam labels Bullhead “as much a psychological character study as it is a gangster pic”, so it should come as no real surprise that comparisons to Robert De Niro’s performance in Raging Bull have been quick to flood in for Schoenaerts’ turn as troubled cattle farmer Jacky Vanmarsenille. Whilst many plaudits seem to have been inspired by the huge physical transformation the actor undertook for this role, an equal amount are based on the clever cattle-based wordplay. Schoenaerts’ preparation took two years and included a focused diet of chicken, tuna and lots of carbs, on top of a dedicated bodybuilding regime. Yet what’s really interesting and intriguing about the character surprisingly isn’t his external appearance, but what happens internally to his stability and mental wellbeing. Jacky is obviously a man of great power and strength, but Schoenaerts plays him with a real tenderness and vulnerability that’s fascinating and beguiling to witness, and lifts his performance beyond the realm of simply an impressive physical transformation by an actor.

“He is not the most likeable person but he is the victim of an enormous emotional and chemical imbalance in his body, that makes him a very vulnerable person. Of course, he has a lot of aggression but there are a lot of things that he is not able to experience in his life… he doesn’t know what it is to get love or to give love. There is a fundamental lack of love in his life which completely messes him up” – (Matthias Schoenaerts on Jacky Vanmarsenille)

Citing The Hidden Fortress, Batman, Star Wars and King Kong as references in the various interviews he has done following the film’s release, it’s clear that Roskam is not only a huge fan of film, but of storytelling in its many guises and it shows. Bullhead manages to exhibit traits of traditional storytelling and in filmic terms it echoes the classics that have obviously inspired it, yet this Belgian debut manages to always feel contemporary and at no point does engagement diminish even if you’ve seen it all before.