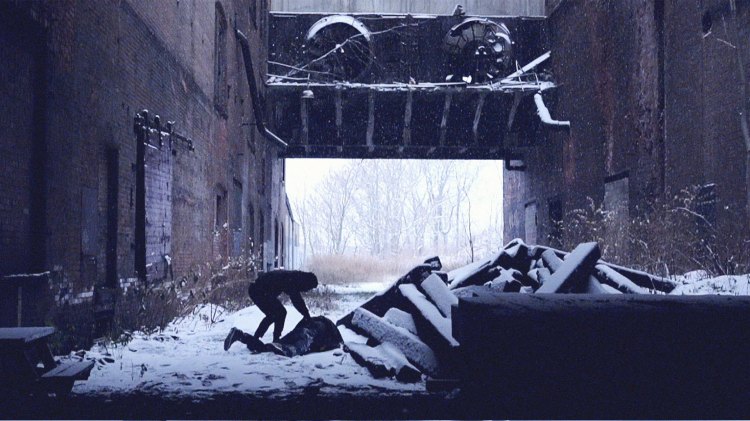 Coming off the back of partnering up with DN regular Michael Lawrence on Day Joy’s Go To Sleep Mess, director Alex Amoling took the reins for his solo promo directorial debut on Chae Hawk’s Remember This Night.

Amoling had previously co-edited and created the visual effects on Hawk’s Dance Party For The Heavy Hearted trailer directed by Lawrence, so when the time came for the album’s first promo, Lawrence suggested Amoling step up.

“Chae let my mind run wild and create this layered story for the video under the one constraint that it would be about ‘getting out of Buffalo.’ The album has a strong emotional and physical journey that I wanted to explore through the gritty visuals and colorful characters. With the DPFTHH teaser there was a burning city, ground erupting, and a theater falling apart. In this video, to continue the journey of the album, we decided to bring some of those same visuals back into the mix, but add more of a gritty real-life style to balance out the mysticism. In the end, what we had was a six minute short on our hands about a young struggling artist, Chae, who collected money for a violent egomaniac, played by Nick, to support his art. Of course, the situation escalates and puts his love interest in danger as this world he’s created for himself starts falling apart.”

The small crew consisting Amoling, Kelly Thomas (costume and props) and Lawrence (DoP and Buffalo insider), had to hit a tight day and a half production window, beginning with shooting Chae’s show at SoundLabs before heading out into the city. Thirty hours and a full bag of confectioned sugar later the team wrapped. The cast was entirely made up of Buffalonians with the exception of Bostonian Nick Apostolides, who Amoling had worked with on his thesis film Moriah two years previous. Amoling found casting Apostolides against type worked well for the promo, especially when balanced by Hawk’s manipulated artist role:

“Since we worked together last, I had seen him [Apostolides] play a lot of ‘good guy’ lead roles so I saw this as a great opportunity to tap into that darker side. He really chews up the scenery in the ‘coke room’ and, in post, it was very challenging not to make a whole video about it. Working with Chae as an actor was an unexpected surprise because he was very responsive to direction, nailed those scenes alongside Nick, and filled the shoes of the role with ease.”

With the shoot complete, three months of post production work took over; the majority of that time dedicated to the forty or so visual effects shots – from the burning streets to the slow motion bullet tearing through Nick’s cheek – present in the film. Amoling working frame by frame in Editor/VFX mode, got to become very familiar with the slow creep of the render bar, but his patience paid off with an epic, yet intimate film about escaping desperate situations in a time of chaos and destruction.