Breaking Down Systems & Adapting to Life in Robert Löbel’s ‘WIND’ 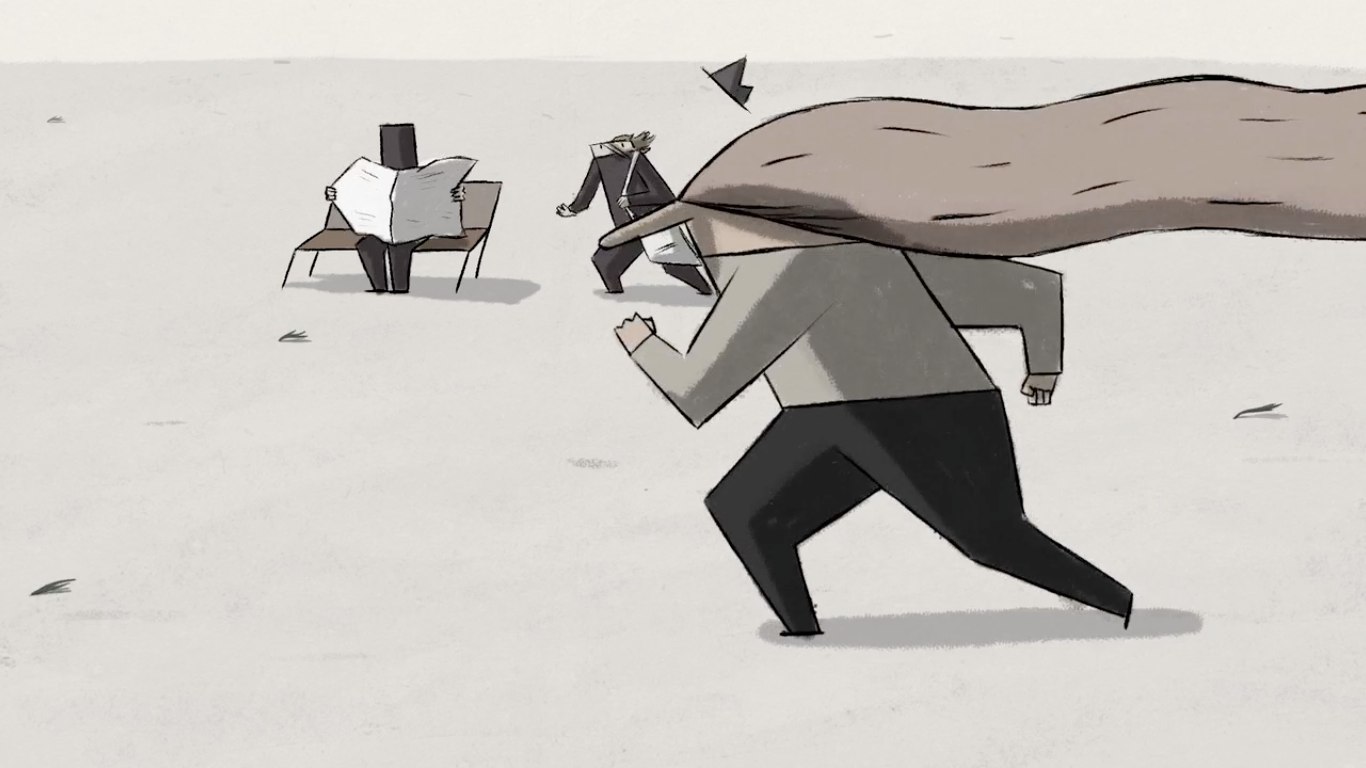 Inspired by the ingenious living abodes of some the worlds poorest people and their ability to adapt, work and raise families in impossible surrounds, filmmaker Robert Löbel conceived and created Wind, one of 2013’s most stand out pieces of animated storytelling. After watching this beautifully blustery film’s residents go about their business on this tempestuous world with a smile inducing determined resolve, we invited Robert to share his production process with DN. But first, be sure to wrap up warm and give Wind a much deserved watch:

Wind is your 2012 graduation project from the HAW Hamburg Department Design where you studied Illustration and Graphic Design. How did you first become interested in working as an animator?

I think I always wanted to be an animator. I remember in my childhood I always watched animated TV shows. I was born in the GDR, there was a traditional film institute called Defa. They made a lot of wonderful puppet and hand drawn animations. I remember the last thing that I could watch on TV before my parents put me to bed was the Sandman (not the Neil Gaiman version, the GDR version for kids). Everyday I was so excited watching these episodes. After watching Sandman, the kids get ‘sleeping sand’ in there eyes and have to sleep. As a kid I believed in that.

Another great memory was the Hungarian series Adolar’s Fantastic Adventures, I still love it today. This was super drawn and absolutely imaginative. Later there were of course Disney movies and classical 90s’ TV shows. I was eight as I watched Alladin in the cinema and ten for The Lion King, all these films was a part of my education I think. After school I tried to apply for an internship at a studio where an old Defa animator worked, but I sadly couldn`t get in. My drawings were too bad. So I thought I’d have to study something which could help improve my work. Nowadays, even after learning how much work animation is, I’m fortunately addicted to it.

I’ve seen commenters comparing Wind to other gusty films. What were the actual sources of inspiration behind the rich world of your film?

In 2011 I visited my girlfriend at her university. She studied architecture and I joined one of the lectures. The lecture was about informal settlements and what architecture could do to help those people. The professor showed photos and told stories from personal experiences. He spoke about their daily lives and how they manage to survive in the poorest places. For example, there was a family who built a house in the central reservation on a highway, because they knew someday the government would come to resettle them. This was the only option for them to find a legal place to live. Other examples are the rooftop houses in China, or the cardboard houses directly next to railways, or houses on the water and so on. This was the first thing I had in mind.

After this first topic inspiration, at the end of 2011 there was the Occupy movement and all this criticism of the actual system. In our shared apartment in Berlin we had long Sunday breakfast discussions about the topics of this movement. So in the end I thought it would be nice, if I could break down a system in my graduation project. These two ideas were in my mind for a long time – on the one side the fall of a system and on the other side people who learned to live in difficult places. Generally I searched for inspiration in animated films with a strong and simple conflict. My all time favorites for example are Au Bout Du Monde from Konstantin Bronzit, La Maison en Petits Cubes from Kunia Kato, The Village from Mark Baker and a French TV series called The Shadoks. The common ground of these films is the strong natural conflict, but the characters have a daily life that makes this conflict looks natural. They kind of learned to deal with it.

So for me the question was; How could I build an abstract natural system which I could switch off for a moment? The first thing that came to my mind was the wind. Wind is natural and the perfect visual system. You can`t see it, you can`t touch it, but it`s difficult to live with. Another reason for wind was perhaps that I studied in the North of Germany near the sea. Some of my friends already adapted themselves to the wind for doing water sports.

Designwise, I wanted to keep the characters as simple as could be. The hard and edgy look of the characters fit the hard life they have to deal with and it was easy to animate. This was my first big 2D animation, so I was frightened enough about some of these scenes. I was wondering how long it would take me to animate them. I only had a limited time, the graduation deadline was the most scary part.

During my festival tour some of the festival guests told me about a film called Wind Along the Coast by Ivan Maximov. I’d never heard of this film before. I really liked it, but I thought “Ok somebody animated wind before, you can`t do something totally new.” In Maximovs film it`s windy but the main idea is different, so I didn’t think too much about it. After putting Wind online, 90 percent of the people like it, that`s totally awesome. But of course some people keep saying that my film is a copy. I’ve heard Mr. Maximov`s name so many times that I contacted him to explain my situation. We chatted briefly, it was really nice.

How did you go about conceiving the various scenarios that take place in the film? Were there other characters/situations that didn’t make the cut?

I made a sketchbook full of daily life ideas and tried to find positive and profitably windy activities for the people. The wind should be a good thing for them, the audience shouldn`t think too much about the hard and bad side of it. The main goal was to capture the cross section of the population. So in my idea sketches I had some more children scenes, for example kids playing on a slide in the opposite direction, so they slip up the slide. Or a pregnant woman gives birth to a baby and it flies trough the wind and ends up in big mattresses. Another idea was a big sweater, when they open there arms it works like a sail and they can fly as long as there arms are open. I also had a wind monument that would fall apart at the end, but that joke was too flat for me in the end.

Could you take us through the production process for Wind and how you worked with Jochen Weidner to complete production?

After the concept process and idea sketches I began to create style frames of the film’s look. It was better for the idea to not use houses so I tried to create a desert environment. The colors should look a bit brown and grayish and match to the dirty surroundings. I animated for my first time in TV Paint with a pencil brush and colored it in Photoshop because it was easier for me to create my own brushes. After animating each scene I did the main compositing in After Effects. I could easily loop each character and keyframe the positions from the walk cycles or the flying babes. The only thing that took a bit more time was the look of the wind. In the beginning it should look hand drawn, than I made some bad experiments with ground coffee. All these experiments were really time consuming. I wanted to create wind more like an incidental thing. Jochen, who I knew from my internship, told me it was way easier with a particular system and some effects in After Effects. Jochen is an After Effects specialist and it was awesome that he was so kind to help me with that. Jochen is the best!

David Kamp is a name which has become synonymous with some of the best animations of recent years. How did the two of you work together on the sound design of Wind? Was it always envisaged as a music free piece?

I’ve know David`s sound work for a very long time. I became aware of him during my studies. I had a side job in a cheese store in Hamburg. Sometimes I was waiting for 3 hours for customers so I used the time to watch the new Vimeo stuff. David seemed to appear in every third cool Vimeo video. So David was of course one of my favorite sound designers and I thought it would be super awesome if he could do the sound for one of my films in the future. Before my graduation project I had an internship in a motion studio in Berlin. During that time I visited festivals like Pictoplasma or the motion meetings of Faux Images, and it`s a small world so we met there.

In my pre- production process for Wind I made a storyboard that in the end looked like a colored comic of Wind. I sent those storyboards over to David and asked him if he’d like to do the sound. After 3 days of chewing fingernails he wrote back that he liked it and accepted. I still have a hole in my pants from jumping on the floor after reading that mail.

I think music in animation is totally awesome but for this particular film it was never an alternative. The Wind is the main character in the film. From the beginning we both wanted to have an intense wind sound. I really like when the machine stops and everything is quiet, it`s a cool contrast.

Wind has had a very successful festival run ahead of its online premiere, how did you decide the timing for the film to make its way online?

Every time my film got selected for festivals I pushed out my online premiere a bit more. It wasn`t calculated at all. I also thought it might not get selected for festivals if it was online before. This was my first experience at international festivals. Now I know that travelling to festivals is the best way to meet other filmmakers. You get a super inside look at the status quo of animation. The festival premiere was at Pictoplasma in Berlin in April 2013. Now after eight months of travelling, for me it was the perfect time to put it online. It`s also a way to clear my mind for my next film, I’ve seen my film maybe 10,000 times now! I’m almost done with festivals for Wind, I want to do new stuff.

With 608K plays and over 7K likes the film’s been an obvious success. What can we look forward to from you next?

Beside doing commercial stuff to earn my rent, I’m thinking about a new concept for my own project. Nothing fixed yet, but I definitely want to go back on the festival road in 2015 – with fingers crossed. I’m also helping animate a friend’s film at the moment. It´s a really nice story, that’ll hopefully come out next spring.