Relationships can be hard. Even when you’re with someone you adore can you ever be sure they’re the right person? For the self-centred couple at the heart of Joe Kramer’s award-winning indie comedy Running the Gammatar, the fickle side of love gets extra heated by the inconvenient interruptions made by the fire-breathing Japanese monster rampaging through their city. We speak to Kramer about hitting the perfect wry tone and monster movie making on a budget.

An Indie relationship fire-breathing Japanese monster comedy is about as atypical as it gets. How did the concept for Running the Gammatar develop?

I generally find myself really drawn to character studies that skew more towards the mundane than the dramatic; I think I’d rather watch someone try to pay their rent than chase down the drug lord that killed their partner. I’m hugely influenced by storytellers like Woody Allen, Larry David, Wes Anderson – guys that focus on things that, whether you like their work or not, you can probably relate to in some way. And the idea for Gammatar was to take that type of basic story that I like – that we’ve all seen countless times – and see what would happen if you dropped Godzilla into the middle of it. I thought there was a lot of comedy to be mined from forcing those two genres to play together (I was probably wrong).

Both you and Jessica Bernard play the self-obsessed, tongue in cheek tone just right. How did you find Jessica and why did you decide to play opposite her?

Thank you! Jess and I have been good friends for a long time – since high school, actually – and we’ve been working on projects together for years. I like working with friends when possible because you automatically have a short-hand with them; they know you, so they get your language and tone in a way that would take someone else some time to get up to speed on. Rich, who plays the friend in the wheelchair, is also a good friend of mine and Andrew, who plays the new boyfriend, is an actor I’ve worked with on numerous projects and have become good friends with as well. 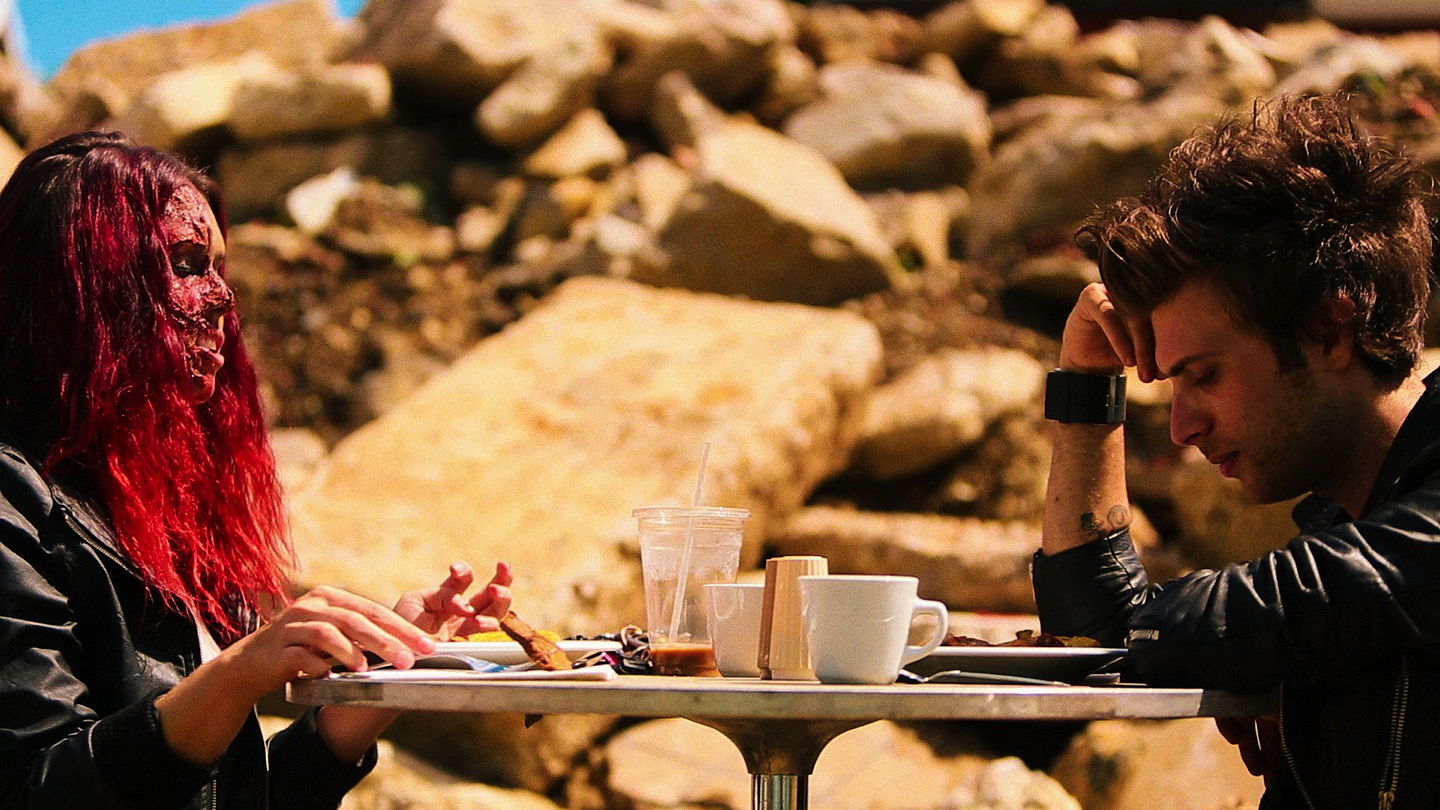 I basically wrote the part with Jess in mind because I knew that kind of irreverence was something she could do well, so there was very little preparation there. As for playing the part myself – I don’t consider myself an actor and had never really done it before, but I wrote it and I knew I wanted the lines delivered in a very specific way, so I thought, what the hell, I’ll give it a shot. For anyone to say that it’s anything better than awful is a huge compliment. You see things in people and you exaggerate them. I’m playing a heightened version of one side of myself; I don’t think I’d be able to pull off much more.

What was your gear set-up for shooting Running the Gammatar and how did the gatecrashing giant monster affect the various stages of production?

The set-up was pretty minimal, as this was a movie made for $1,700 that I paid for out of my own pocket. Getting it done was only possible because of the extremely talented (and generous!) group of people I’m lucky enough to know. We shot on a Canon 5D MkIII with only three lenses – the 16-35mm 2.8, 50mm 1.4, and 70-200mm 2.8. I like a very formal style – I’m not a fan of what I think is the excessive use of hand-held, shaky-cam stuff that we see a lot of now – so keeping the shots pretty rigid was a big priority; there’s a lot of slider and steadicam work in it that I wish could’ve been dolly stuff, but it just wasn’t in the budget. If the Movi and all of its alternatives had been available at the time of shooting, it would’ve made things a lot easier.

The monster itself really isn’t in too much of the movie, so there were only a few shots in which we had to keep its placement in mind while filming on location. Every shot was storyboarded ahead of time, so that simplified the shooting of scenes involving it quite a bit. All of the monster footage was shot in one day at a blue-screen set-up with Tony DeBartolis, who created the monster, performing in the suit. Right off the bat, he got the tongue-in-cheek tone of the movie and I love what he did with it.

The post-production is where the monster became a bit of a pain in the ass. There were a lot of little imperfections to work around with the compositing and because I was doing it myself – and I’m by no means a wizard with After Effects – it was a long process to get it to a point that I was happy with. What we had going for us is that this is a play on movies from an era in which the shabby, raggedy nature of these monsters was a part of the charm.

The script was written over the course of about 2 or 3 months, shooting stretched over a period of a year or so because of the limitations of having what was basically no budget – it had to be done on whatever weekends people, locations, etc. were available – and the post-production probably took about a year. A good chunk of that post-production time was simply waiting on things like release forms or music.

This short has gotten far more attention than I expected – people seem to be responding to it really well and seeing all of the press and views it’s gotten has been really thrilling – so I hope to use some of that goodwill to get a feature-length film I’m currently writing with a friend off of the ground. It’s unrelated to Gammatar, but it’s going to strike a similar tone and be done in a similar style while obviously delving a little deeper into its story and main characters.