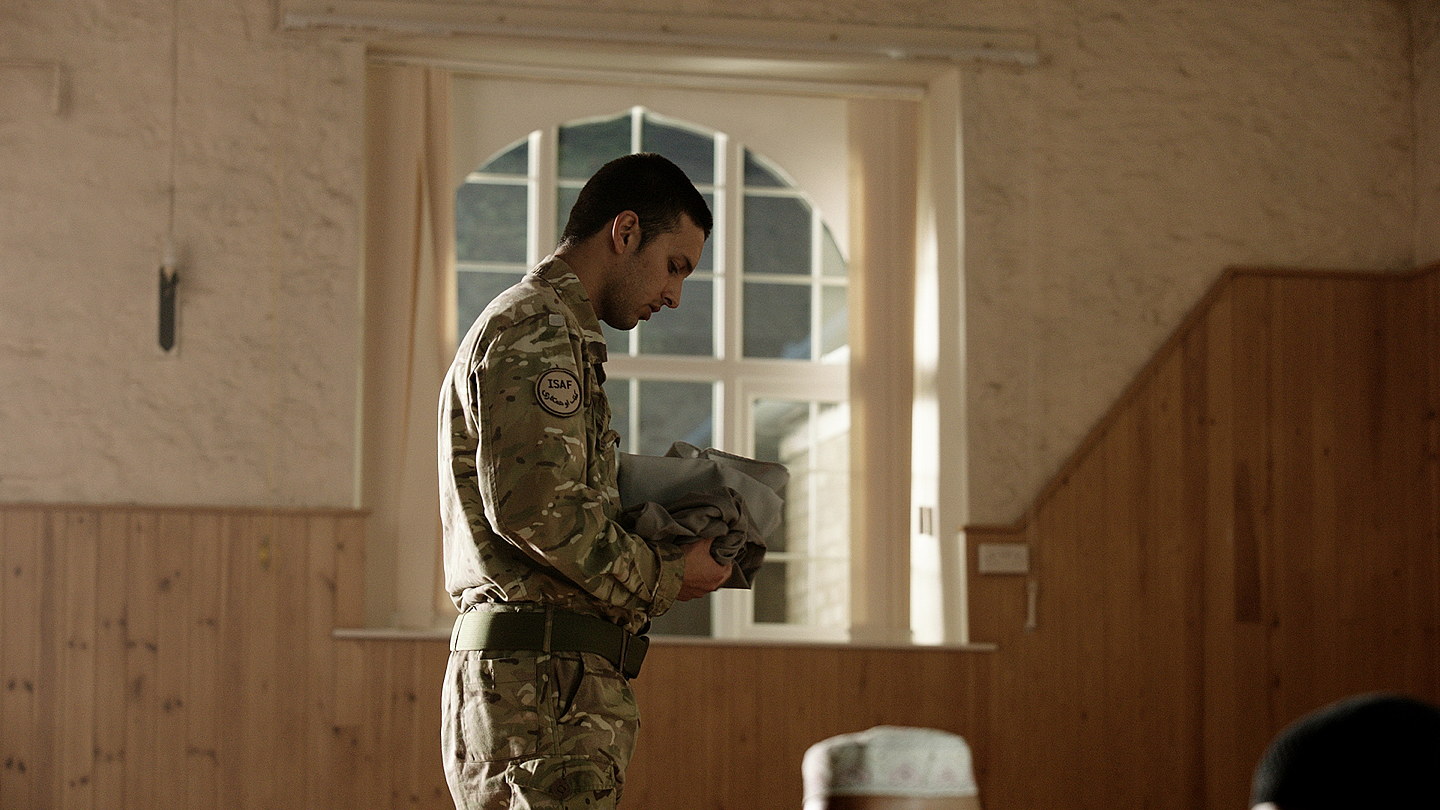 Despite what cinema often leads us to believe life’s significant changes more often than not play out in the small moments of personal drama not global alien invasions. In Rachna Suri’s brilliantly subtle drama Our Lad, a returning Muslim solider finds that resentment at his return presents itself in a series of difficult moments as he faces tensions from his rage filled brother and distrustful community. Suri discusses how her heartfelt focus on a minority UK community speaks to universal truths of family dynamics and estrangement.

Issues of family, religion and expectations are all weaved into the fabric of Our Lad, but for me, there’s this central question of if opposing identities can coexist within one person and within a community. How did you develop the idea with writer Ishy Din?

The idea for the film was borne a while ago in 2007. I noticed that there were a few small news stories about the negative reaction to British Muslim soldiers fighting in Afghanistan by a small number of Muslims in the UK with extreme views. I’ve always been interested in discrimination within and between minority communities as opposed to more traditional perceptions of discriminatory behaviour. So I found these stories – such as the threats to Jabron Hashmi’s family after he died in action – distressing and ripe for further investigation. I found out that there were only 600 British Muslims in the Armed Forces (which has since decreased to 480) and wanted to understand the reasons for this. However, to a certain extent, my research was just background – Ishy and I didn’t really talk about it at length but simply tried to create a story about a family in crisis. Ishy had his own cultural experiences to draw on and came to the story from a more personal perspective.

What brought Channel 4 onboard?

Channel 4 came on board with the project after the shoot to support the post-production. My company was working with them on another project and the subject matter of this film appealed to them and fitted with their remit.

I was particularly interested in the parallels between the Army and the Mosque – the male environment, order and discipline.

Whilst the film’s emotions are tumultuous, Dirk Nel’s cinematography grounds us with a crisp, clean image, highlighted with small, gentle moves, What were the conversations you had to lock the film’s cinematic language?

Dirk and I had an extensive, ongoing dialogue about the look of the film and shared a number of ideas and references with each other from an early stage. I was particularly interested in the parallels between the Army and the Mosque – the male environment, order and discipline. We played with the juxtaposition between the order that the Army and religion provides and the disorder that Ali is experiencing in his personal life – the breakdown of his family unit, the personal attacks he faces. We also drew on the beautiful symmetric patterns depicted in Islamic art. The dusty palette developed from a desire to echo the remnants of Afghanistan – to convey the freshness of Ali’s experience.

There’s some effective uses of small details informing the wider story, such as the sand in his pocket. Were those moments present in the script or found on set?

The details were very much planned. We went through the exact steps of the journey that Ali would have taken to get home, with our military adviser, Emile Simpson, who served three tours of duty in Afghanistan. For example, in the exceptional case of having to return for a funeral, you wouldn’t have the customary decompression period that you usually have before returning home. We considered every detail – which airport he would fly to, which train etc.

That level of subtlety is weaved throughout the entire short – confrontations do occur but aren’t overly dramatised. How did you work with your actors Shazad Latif and Aqib Khan to establish that level of performance?

Shazad brings a very natural, subtle quality to his performance so, by immersing him in Ali’s world, we were able to achieve a very complex understanding of the character. Emile (our military adviser) helped us to really understand the experience, practicalities and emotions of being in service in Afghanistan. Shazad had his hair cut a couple of weeks before the shoot and we gave him his costume (which was Emile’s actual uniform) at the same time – once he went for a run in his local park in his combat trousers and started getting funny looks, so he was already starting to imagine Ali’s experience.

Was that tone something you further finessed during the edit? How important was it to provide the audience with breathing room?

I felt it was important that the film shouldn’t be heavy handed especially given the sensitive subject matter. Miikka (the film’s editor) has a very delicate and detailed sensibility, which lent itself very well to the dynamics of the story. We wanted to let moments hold and give them room to play out. Even the smallest changes had huge impact on the pace and overall viewing experience.

Danny Bensi and Saunder Jurriaans’ score builds a dramatically ominous tension, what were the reference points you shared with your composers?

I really liked the soundtrack for Martha Marcy May Marlene, which Danny and Saunder had scored. The ideas of repetition and order fed through to the score as well as the production design and cinematography. One of our references was the repeated piano note in the theme tune from Hunger.

Difficult family dynamics, experiencing pain and feeling like an outsider are all within our scope of imagination.

You’ve stated that you “hope people’s expectations are surprised or challenged by the film,” do you have an overarching message that you’d like Our Lad to convey to viewers?

The film is open-ended for a reason – hopefully, there’s enough for everyone to find something in there that chimes with them. Personally, I think there is something to be said for similarities in unifying us – difficult family dynamics, experiencing pain and feeling like an outsider are all within our scope of imagination. It can be an effort to accept the differences in others but recognising similarities can be helpful in doing this.

Your BBC commissioned short Playing Ball was recently released. Are there any other projects in the works?

Playing Ball is very different from Our Lad in terms of tone – it’s a dark comedy – but it also deals with the idea of being an outsider and there is a definite continuation in my approach to the direction and cinematography (Dirk also shot it). It’s definitely more fun, and more silly! It was a great experience to work on something so different and interesting to direct something that I hadn’t conceived. You can watch it on the BBC iPlayer. I’m now working on a slate of feature film and television projects – latest news and updates will be posted on my site rachnasuri.com