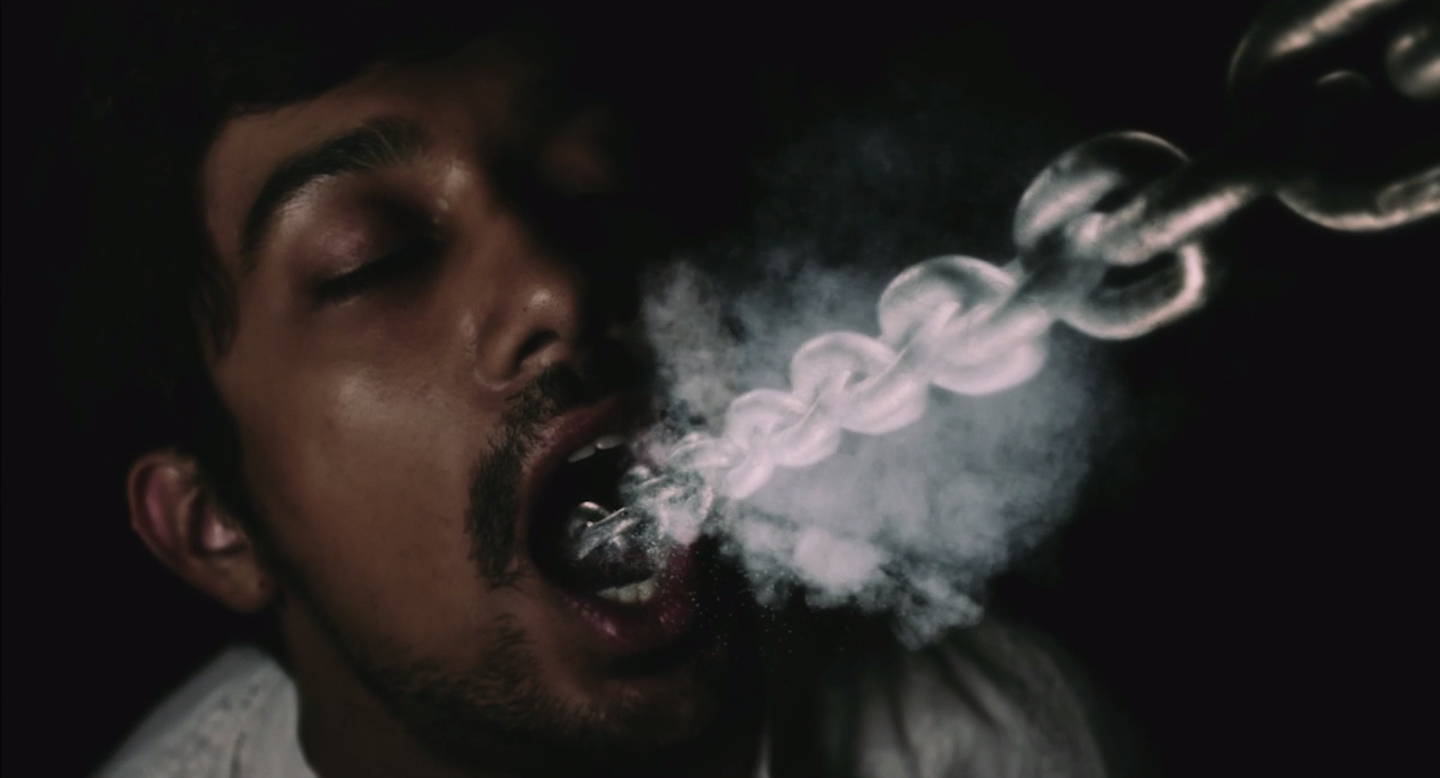 Straddling the terms ‘cleverly captivatingly’ and ‘super freaky’, Ethan Young’s music video for the East meets West fusion sound of Humeysha track Burma Between You And Me, travels below the surface to reveal the beautiful machinery of creativity and expression. We invited Young to tell us how he marshalled a mix of DIY techniques, accommodating collaborators and on the job learning to pull back the skin of the artistic method.

Zain and Dylan (Humeysha) are two of my closest friends (since our freshman year at Wesleyan University) and approached me a little while back about directing the music video for a new project that Zain had started work on during a year he spent in India doing research on a grant from the Clinton Fellowship. In terms of videos, my mind is normally oriented toward more aggressive and driving music so it was an enticing challenge to try and develop something that suited the easy-going nature of this track.

The initial spark for Burma Between You and Me came from a desire to use my extremely rudimentary knowledge of stop motion / claymation to show the inner workings of a beautiful machine while also wanting to keep one foot firmly rooted in visceral and tactile imagery. I had been watching a lot of Yellow Submarine at the time and was very inspired by all of ways that movie uses the visual language of psychedelics to fuse machinery with the human body while maintaining a ever-present sense of playfulness. So I thought up this series of little vignettes that would pull back the veil on the inner workings of the most wonderfully nonsensical contraption at work under the skin of the artist. Our good friend and visual artist Timmy Hyunsoo Lee was kind enough to open the doors of his studio / apartment and provide us the space for our makeshift animation studio. During the two weeks that it took my Production Designer Emily Schubert and me to complete the stop motion work, Timmy was simultaneously slaving away on the album art right next to us. A little Humeysha factory nestled in the heart of Ridgewood, BK!

For the stop motion, we used an overhead rig made of PVC piping and attached a Canon 60D tethered via USB to my laptop which was running the stop motion program DragonFrame. This allowed us to constantly be playing back and checking our work as we animated the face, the brain, the chains, etc. I recorded a reference video of myself singing the song and we were able to overlay this onto the image of the clay face as we animated it – basically claymation rotoscoping.

Because I knew I’d have to cut-up / tear / smudge whatever green/blue screen we used as the chromakey background, we used plastic party table clothes instead of proper green screen material. $5 a piece on Amazon. The eyes of the face and the brain were replacement doll eyes and the teeth were super cheapo plastic false teeth. I can’t imagine anyone actually using those teeth in daily life and fooling anyone, they were terrible – but perfect for our purposes! During the two weeks I basically put out an open invitation to all my friends who work freelance or have weird off days telling them to swing by the studio and help out / hang out if they felt so inclined. We had a handful of visitors / helpers and it felt like a really fantastic way to mix social time with work. I had always been so afraid of the arduous task that is stop motion animation but the collaborative element of it all nullified the tedium entirely.

Once the animation elements were completed we had two days of shooting – one day for all the shots of Zain and another day for all of the live-action green screen assets. We filmed in Timmy’s studio as well, and since space was tight we kept the crew pretty small both days – less than 10 people all included. We shot on a Sony FS7 using a Canon CN-E 30-105mm Cine Lens. Our lighting package was bare bones as well – two 750w Lowel Rifas, one 200w inky, one 750w Leko. Considering how small the crew would be, the limitations of the very small budget, and how much time I had to complete the After Effects work, I decided to shoot 4K so that I could do all zooms/pans/tilts in post and thus my compositing work would be entirely with static frames rather than constantly having to track the camera motion. 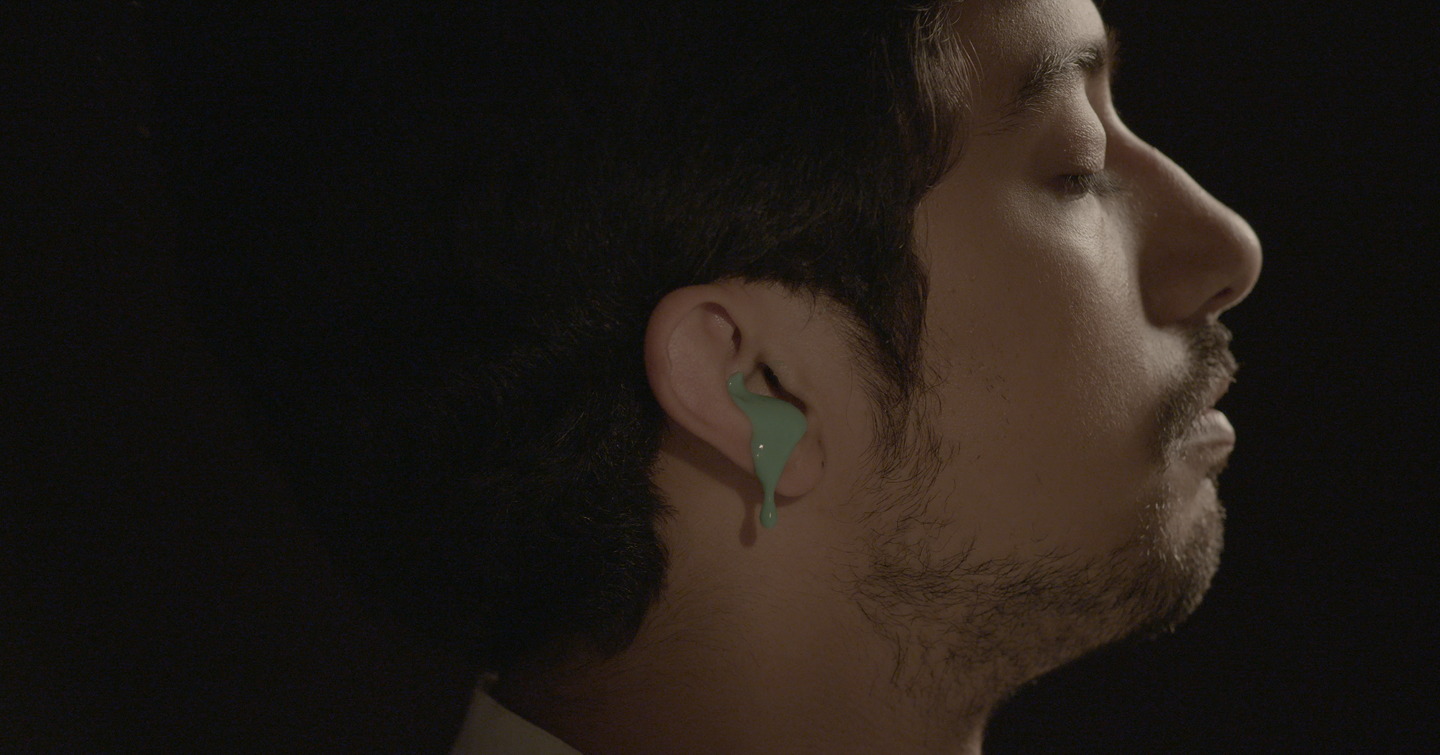 The day of shooting out all of Zain’s closeups was relatively straightforward thanks to how quickly and efficiently my Gaffer (Stefan Skirpak) and Key Grip (Rizky Rahadianto) were able to execute each lighting setup. The day of green screen assets was when things got weird. For the mysterious multi-colored liquid you see throughout the video, we alternated between Marshmallow Fluff and plain yogurt, both died green with food coloring. Getting them to have just the right amount of viscosity to drip off of a hand or a spoon but still maintain a globulous shape proved to be one of the most difficult tasks. My production designer, Emily, volunteered her hands for that of the Brain – a setup that ended up being a bizarre dance between my producers dripping the goo into one hand, Emily transferring it between her hands and then dumping it on to a plate held by Rizky.

For the streams of fog / smoke in the video, we initially planned to use a proper fog machine, although Timmy was worried about the smoke alarms in his building potentially going off. So, in a moment of quick thinking, Emily suggested seeing how hair spray looked in the illumination of the spotlight. It was perfect. For the wispy smoke we lit a small standard candle under the leko, extinguished the flame and just rolled on whatever we were able to get out of it. The dancing bodies that surround Zain at the end of the video are more than half of the crew (myself, both producers, key grip, and production designer) and a few of our friends who were kind enough to swing by, remove their shirts and flail around for a few minutes.

Once live footage was completed I set to work on making sense out of the madness. The treatment I wrote was very explicit about the order and duration of each shot so the actual edit took less than day. However the compositing work in After Effects was around two weeks of early-morning to late-evening work. I would still consider myself a relative noob with that program, so things went slower than they might have under more experienced hands – but it’s exactly this lack of experience that made the work more enjoyable for me. Every new shot held its own set of entirely unique complications, so it was a really creatively engaging process to make my way through the woods – consistently thrilled by what that program is capable of every time I dove a little deeper. I have the feeling that if I had known exactly what I was doing from the beginning of this process it would have been quite a bore.