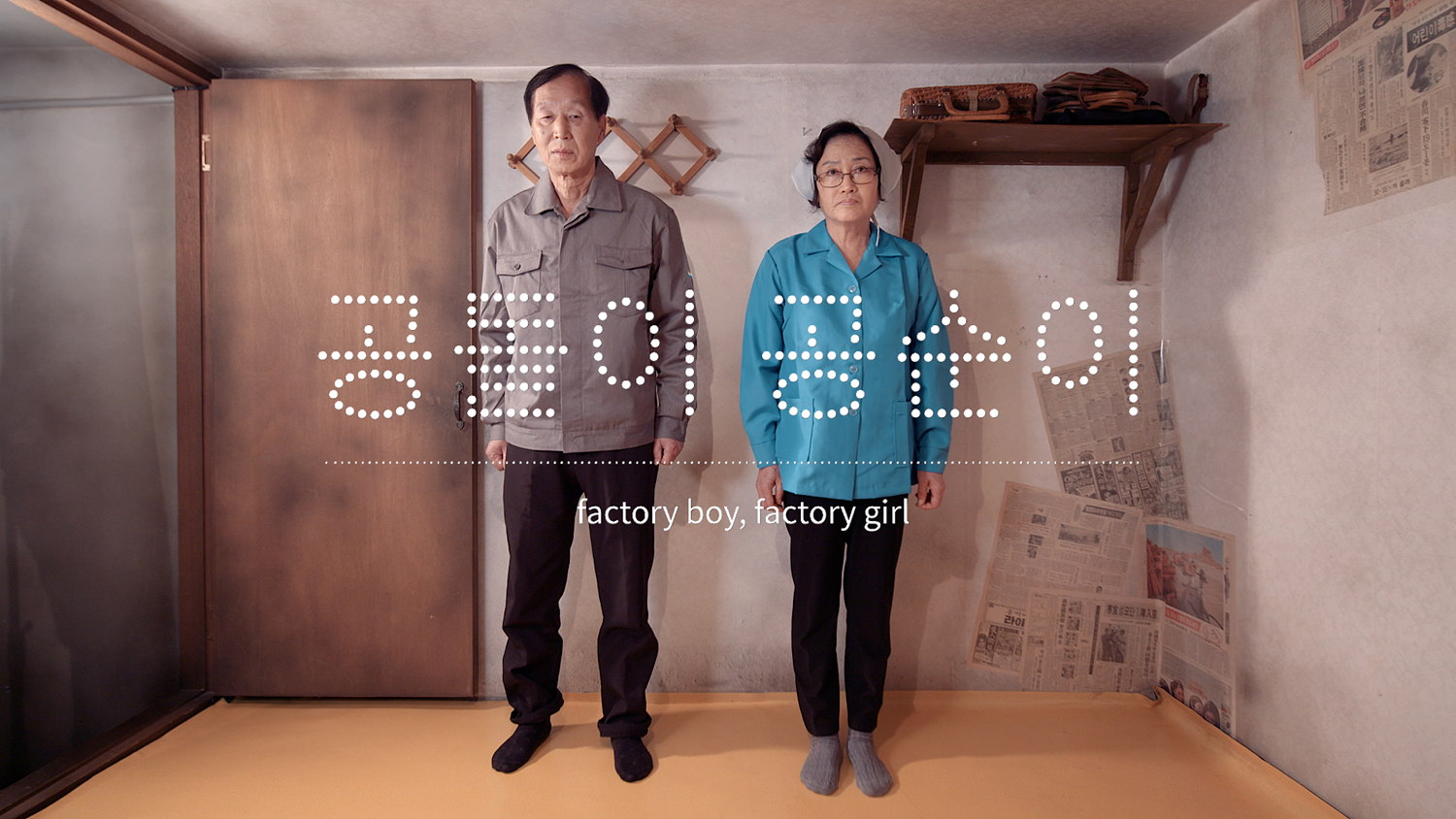 First featured on DN a couple years back with his poetic art and abandoned places short Translating Furniture, South Korea based Director Nils Clauss has continued to explore questions of architecture and space through film in the intervening years. His latest piece, Bikini Words, is a fascinating and beautifully executed study of the working and housing conditions which serviced Korea’s industrial expansion of the 1970s and 80s and with it, birthed a new lexicon amongst the factory town workers. Clauss guides us through the commissioning and production process of his linguistics based documentary.

Bikini Words is a video I made for Geumcheon District Office. Geumcheon is an urban district of Seoul, South Korea. I was initially approached for this job by Hongsung Kim, the founder of Design Studio Kerb, and Jinbok Wee, the head of Urban Intensity Architects. Both of them were aware that I work with a strong focus on space and architectural related topics and therefore thought that I was the right person for this job.

At the same time Hongsung and Jinbook had been in the middle of preparing a big exhibition platform for Geumcheon District Office, which will be shown at Gasan Digital Complex Subway station for 5 years starting in the beginning of 2016. Jinbok is the curator and main architect of the exhibition and Hongsung the art director. By utilising architecture, design, photography and film, the exhibition builds an overall picture on how Geumcheon District has been shaped during the “miracle years” of South Korea’s rapid economic growth starting in the 1960s all the way up to the mid 1990s. Even though this was the time which shaped South Korea into a wealthy and developed country, that period also left scars, and human rights were often disregarded while prioritising economic success.

When I first met Hongsung and Jinbook what I immediately got hooked on was an index of 99 words, which dates back to the 1970s and 1980s. This index, compiled by researcher Haeyeon Yoo of the Soongsil School of Architecture, is titled G-index. The letter “G” relates to G-Valley, an area in Seoul which includes the districts Geumcheon, Guro and Gasan. This area was well known for its industrial activities in textile manufacturing, dressmaking and other labour-intensive industries during the 1970s and 1980s.

The 99 words or terms in the G-index were coined by the factory workers of that period. Some of these words had been newly invented and some had been given a new meaning. Some of the words are purely Korean, some of them are Konglish, a form of Korean language style English. This index is so fascinating as it’s not only of value linguistically, but also as a unique social historical document that sheds light into the life of the so called “factory boys” and “factory girls” of that period and the harsh conditions they worked under. The words also emphasise the importance of education for the factory workers, and the role fashion played as a form of escapism in the short periods of leisure time they enjoyed.

Together with my producer Kuiock Park we went through the list of words and tried to build some of them into a theme that makes sense and creates a kind of narrative for the film. With the words we came up with, I felt we created an insight into various aspects of workers’ lives in a way that would be clear to an international audience to help them understand what was going on in Korea at that time. The eight words we chose are a mixture of new Korean and Konglish words, which neither make sense to native English-speakers nor in a Korean language context. This also explains the title Bikini Words, a Konglish expression made up for this film emphasising the linguistic focus of the film, but also referencing one of the key expressions in the film: “Bikini Closet”.

Geumcheon District Office themselves run a small exhibition space called Guro Industrial Complex Labor House (GUCLH) in G-Valley. They gave me all the creative freedom I wanted, but from the start it seemed quite obvious that they would appreciate my shooting in that space. I also quite liked the little rooms and I thought they could be put nicely into context in the video. They often have school visits there and encourage kids to come in and experience the rooms and that period by putting on old clothing and then taking photos of themselves in those rooms which resemble the “bee hives” accommodation the factory workers used to live in. So this initiated the idea to place people in the rooms and give each room a theme connecting it with a word from the G-index. The problem was that all rooms were very similar and they looked very much alike not only because the similar size but also because of the furnishings. Each room for example had a bikini closet, so we ended up removing and exchanging a lot of furniture to create a visual difference.

When Kuiock and I started scouting Geumcheon area, we approached people on the street. We wanted to meet people who had worked in factories during that period. The area today has completely changed. Actually a lot of Chinese immigrants are now living in this area and most Korean factory workers from that time moved to other areas of Seoul. But the first two older women we approached had actually worked in the textile industry in Geumcheon during that time (the woman in the video who is studying and the women who hides in the bikini closet).

We started out lucky, but after that it was actually really hard to find other workers. Most people were not interested in participating, as the media creates the same stories about the factory workers over and over again and a lot of clichéd stories appeared on Korean TV. We really had to gain their trust and convince them that we are working on something else and different. The lady who speaks the voice-over, who is also the “puppet boss” in the film, luckily had a lot of connections and was really helpful in gathering workers from that time. The “puppet boss” lady actually was a strong workers activist during that time and without people like her working conditions would probably have been even more terrible. She really knew what she was talking about. We interviewed various people for the voice-over, but her answers for the word definitions were so spot on that I dropped the initial idea of using a variety of voices in order to make it more representative for all the many factory workers of that time.

If you watch some of my or CONTENTED’s older work, you will see that we have worked quite a bit with older people. For this project again it felt wrong to me to put young people into the rooms and reenact something equivalent to what the factory worker experienced in such rooms during that time. I was not going for authenticity in terms of the actions and the rooms at GUCLH. Everything was setup and staged there anyways, as it is an exhibition space. So I decided to keep that feel and to create a bit of an edge, I felt it was suitable to use real factory workers of that time in that space and have them act out the words.

We had a lot of fun during the shoot. I was amazed how well the factory workers participated and really thankful that they did such a great job. We all had a good laugh with the ladies in the wedding dress, the woman with her great dance moves and the old lady in the bikini closet. I felt the film needed the extra layer of humour, as I did not want to create a super sad story from beginning to end. Of course their lives have been very tough and they all were very hard working, but that does not mean that they did not know how to make the best of it and enjoy themselves. And of course they all went through this with the hope of a better outcome in the end.

As I did quite a bit of work (especially in photography) on spaces of disappearance, I thought another layer of that could be really nice to intercut between the 8 different rooms. Seoul is such a rapidly changing city. G-Valley today is way different of the G-Valley during the “miracle years”. Most of those factories are gone, bee hives are hard to find, and all those spaces which relate to the factory workers in every day life hardly exist anymore. But I really wanted to take the audience back in time. I did not want to take them back in time in a staged environment of the GUCLH exhibition space, but was really attracted to the idea of hunting down those real spaces, which the factory workers inhabited during that time. My producer Kuiock Park did an outstanding job with this. She put in a lot of research to find these places and then navigated through a lot of issues to secure permission to shoot.

Stylistically I also wanted to create a difference between the unreal (almost fantasy-like) environment of the GUCLH and the real remaining spaces. Therefore in the 8 rooms everything is very graphically framed and the camera does not move. In the real original spaces, the camera floats through space and takes the audience on a tour. I wanted it to feel like a walk through, so that the audience can feel and imagine what those spaces might have looked like back in the days with people working, living or spending their free-time in there. Those images are supposed to take the audience on an imaginary trip back in time. Therefore it was really important that there are no people in the footage, so the audience can fill in the blanks.

We shot with a Sony FS7 and put it on a Ronin gimbal device. I knew it was going to be really heavy and for a while I debated a smaller camera, but I really wanted the look of the images to be the best that was possible. My assistant Seongil Lee and I took turns operating the gimbal, so it would not put too much strain on either one of us. Not to waste time on a lot of re-adjustment, I shot everything on 24mm, so we did not need to change lenses. With the Metabones Speedboaster that translates into 24mm full frame, which I felt was a good focal length to cover interior space. For the spaces with daylight I used a Smoque 1 Filter by Tiffen. I really like how it softened the light and adds a bit of a blurry dreamy texture to the overall image.

Overall this has been a great project. It’s great if you get to do this kind of stuff for work, where you have all the creative freedom you want and also get to immerse yourself in something which relates to your personal interests. I have focussed on architecture and space-related topics actively since 2003. Bikini Words is a continuation of that interest. I would like to thank everyone involved for their support and tremendous help. I could not have done it alone.