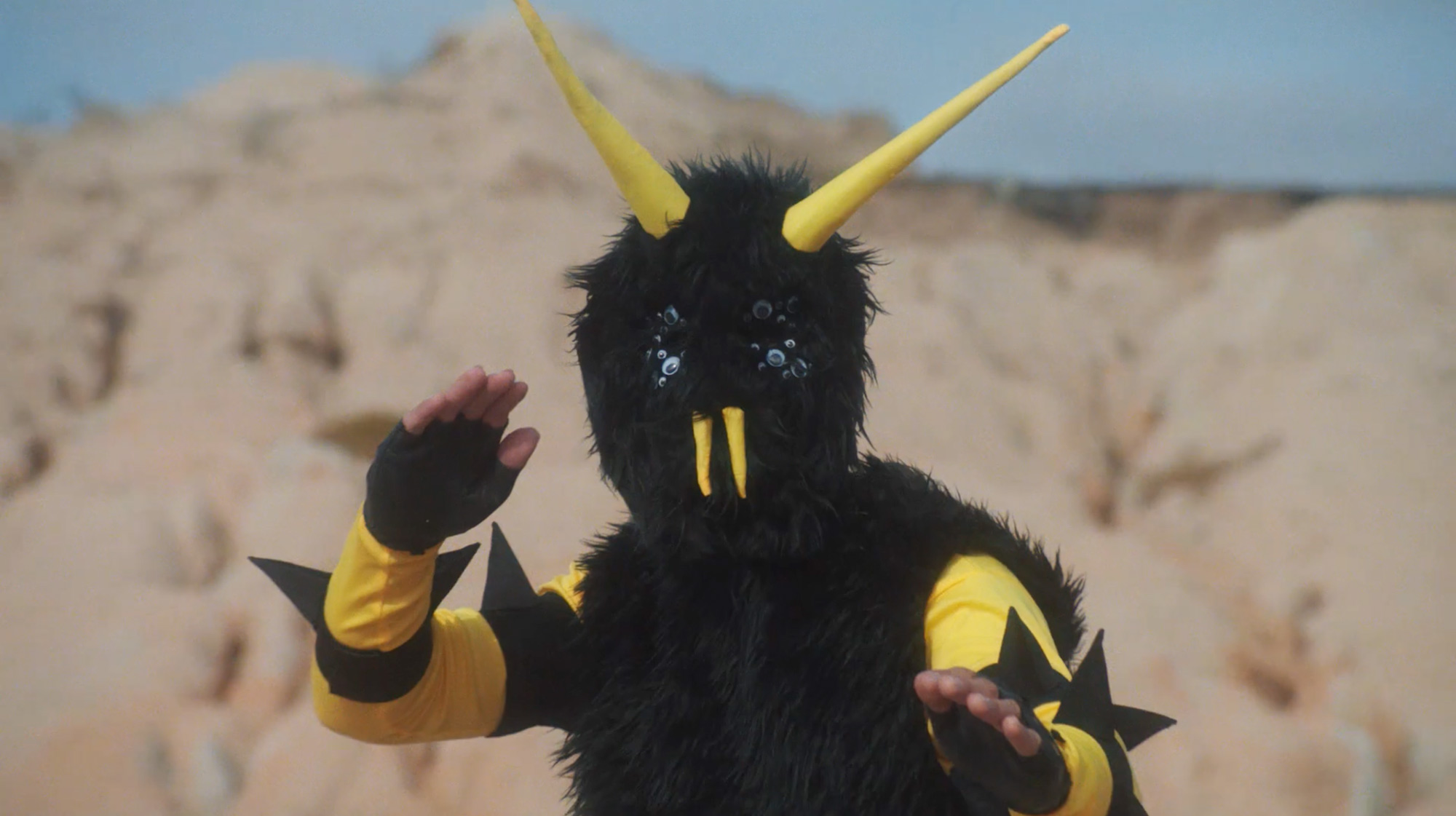 After we left the story open-ended with the sacrificial cliffhanger video for Gamma Knife, Jason Galea and I set out to continue in the same Holy Mountain inspired style to work on the new video for People-Vultures. We decided to take it a step further by drawing influences of 60s/70s Japanese Tokusatsu TV shows like Ultraman and Kamen Rider. We ended up conceptualising a giant 6 meter (20+ feet) tall musical vulture. 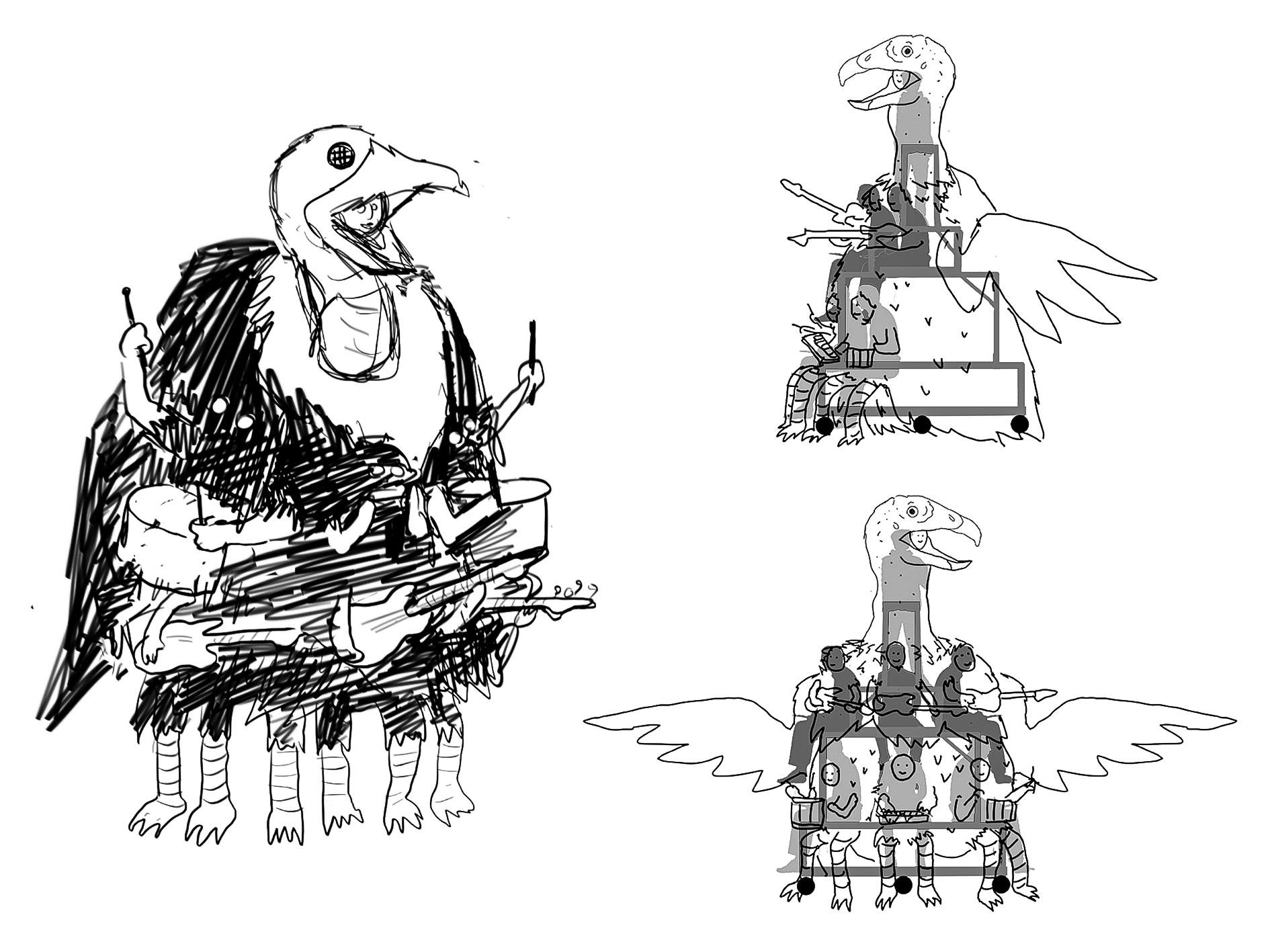 The vulture housed all seven band members along with their instruments and trundled across different landscapes fighting various characters plucked from other songs on the new infinitely looping album. Jason has been working alongside the band for all their visuals (album/poster artwork, music videos) for quite some time. The guys naturally trust his vision and this carried on for the current music videos. We pretty much had free reign conceptually with our only constraint being the budget. In total, the entire production took a team of nearly thirty people and three weeks to build and shoot with filming taking place in a quarry an hour outside of Melbourne, although Jase and I had been working on the concept for a few months prior.

The vulture skeleton/interior was built by Boxwars, who are a Melbourne based group who specialise in the construction and destruction of all things cardboard. Jase and I gave them sketches to work to and they would send us updates as they built each section. Once the base structure was complete, a small team led by the incredibly talented Tom Brooks, came in to dress the costume. This was 4 consecutive nights leading up to the shoot; cutting, painting, gluing, setting resin, etc. I spent most of my time with an assistant hand cutting out all the feathers from fabric. Jase worked on the head and created the feet. As this was happening, the costumes were being created by Vovo the Label. Again, we gave them designs and they brought them to life. The night before the shoot, we finalised the storyboard and loaded up the vulture in trucks. At this stage, none of us had seen the whole costume in one piece, we had to wait until the day and hope every piece fit together.

With the vulture fully assembled with all the band members inside, it weighed over a tonne, was 6 metres tall, and was difficult to move safely across the rough terrain without breaking or toppling over. Stu, the front man, had the daunting job of being inside the vulture’s neck and head with only a small railing to battle the vertigo and bumps as the vulture slowly moved. Filming this a week or so before a USA tour was pretty nerve racking, we would have been gutted if something went wrong and might of prevented any of the guys from going away. Post production wise, Jase and I edited it together, we had a stack of footage, it was super fun. Jase then got to work on the animation. After working through a few different styles, we landed on a 60s/70s psychedelic animation vibe. We wanted it to match the genre of the music as well as fit comfortably with the live action we’d created.

The People-Vultures video is episode IV of the Nonagon Infinity video album, set to be finished by the end of the year. The next video in the series is an animation by Jase which I hear should be out pretty soon. In terms of live action videos, at this stage, there’s nothing concrete. There’s a total of 9 clips to be completed by the end of the year, so we’ll see what happens! I’ve throughly enjoyed working with Jase on these clips, he’s a real talent. I’ve also cherished the opportunity to work with a band whose music I’ve dug for years, they’re super nice, down to earth dudes.

As I’m a photographer too, I’ve been working on a new portrait of Courtney Barnett. I’ve got a miniature set designer working on the concept at the moment. Video wise, it’s about finding the right song. I receive requests quite regularly but it’s so important to me to really connect with the track. The music inspires the concept. If you try and squeeze an idea out of a track that you don’t connect with, it’ll be an uphill battle throughout the whole production – regardless of the budget being offered.