Since first discovering the work of LA Director John Merizalde we’ve seen the polymath filmmaker deliver claustrophobic space fiction, powerful social commentary and a host of music videos which run the gamut from witchcraft to urban violence. Therefore, I can’t honestly say I’m surprised that John’s newest film for SG Lewis track Holding Back, sees him pay tribute to one of Atlanta premiere roller skating spots while straddling the line between documentary and music video. With the release of Cascade his directors cut of the project, we caught up with John to discuss capturing a community that rolls along together and how serendipity can be responsible for a project’s finest moments.

How did you first discover Cascade and its community? Do you have a personal connection to roller skating?

I remember being taken to roller skate as a kid. It was something we’d occasionally do for fun, like bowling, and was often a common place to celebrate birthday parties. I’m not sure if it’s something specific to the South, but I remember visiting a few different roller rinks. I didn’t discover Cascade until I was a teenager. I’m sure it had something to do with the movie ATL, as that was the backdrop for the film. Either way, I knew it was a special place as soon as I entered.

You certainly did a great job of conveying that feeling. Documentation is one thing, but crafting a piece such as this where the energy is palpable is something else. How did you channel that atmosphere into the film?

There was always the idea of creating a balance between music video and documentary, and riding that line. I think what really makes a music video stand out is the synergy between movement, music, and edit. There’s a palpable energy that already exists every night at Cascade, and you can feel it when you walk in. We just tried our hardest to capture it. I think having our skate crews – SOS and The Ones – were essential to creating that vibe. Their choreographed movements just happened to fit perfectly with the track. Often times the best moments are serendipitous.

I think what really makes a music video stand out is the synergy between movement, music, and edit.

Cascade is awash with a rich variety of character types, what drew you to the people you chose to hone in on?

Our goal was to profile Cascade on a hot summer weekend – so we were sort of at the whim of whoever decided to show up. We wanted to just capture authentically as much as we could, with our skate crews as the anchor for our piece – as they lead the voiceover. It was also important to highlight the age diversity on the rink, so we visited on a “kids” night, and then on an “adult” night, which is generally insanely packed. I think we got a good mix in the end.

Unlike your previous projects this time you share directorial duties with Pasqual Gutierrez. What led you guys to team up for this one?

I recently signed with an incredible new production company in the US – Whitelist. Pasqual, a director on the roster, is actually the dude that pulled me in. Since then, we’ve developed a really close friendship and happen to share a lot of the same taste and sensibilities – which is why I brought him on. Around the time of shooting, I was juggling a few projects, so it really helped to have some extra manpower. He came out to Atlanta, and was instrumental in tracking down these skate crews, as well as managing the shoot. Shooting in a rink with hundreds of people can be overwhelming.

You would think being around those skate crews would bring up your skill level, but in fact I think I got worse.

Speaking of which, I love how the camera glides along with the skaters when you take us onto the floor. What was the difference in your shooting approach for those scenes verses the more observational footage?

The biggest thing I wanted for our cinematography was for it to match our setting and sound – free-flowing, dynamic, and smooth. A little different to some doc stuff I’ve done in the past. We shot on anamorphic Dragon, with about half of it handheld and half of it on steadicam. Honestly the splitting decision was fairly practical. When the space was a little more empty, we had the steadicam out (on roller skates!) getting those dreamy moves. When the place got packed, with almost no room to move, we switched to handheld and improvised what we could. Gotta give a shoutout to our steadicam op Richard Volsky and to our DP Kristian Zuñiga for braving that rink. 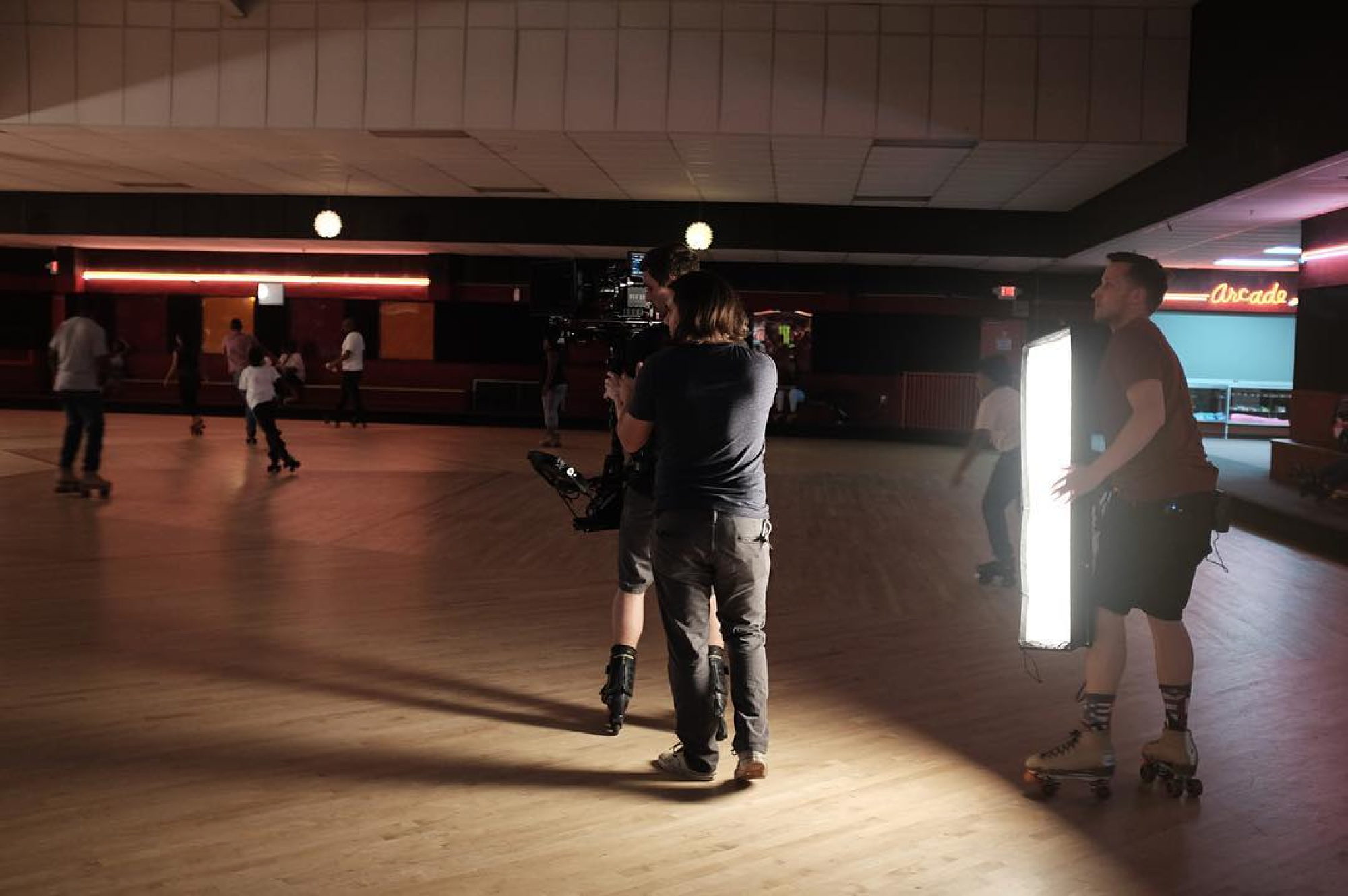 That ease and flow carries over into the structure of the film itself and fits perfectly with the track and the subject matter. Had you determined how it would all come together at the outset or was that discovered in post?

I always go in with a rough idea of how I imagine it, but honestly I love to let my editor (Chad Sarahina) discover moments and shape it in ways that I didn’t foresee. Especially when dealing with doc stuff, it’s nice to have some spontaneity, and I’ve got to give him some big props for finding a lot of great moments in that footage.

Did you manage to pick up any skate tricks during production?

You would think being around those skate crews would bring up your skill level, but in fact I think I got worse, ha. I’m just glad I didn’t bust my ass at all while shooting.

I got my hands in a little of everything right now. Definitely more docs to come though.