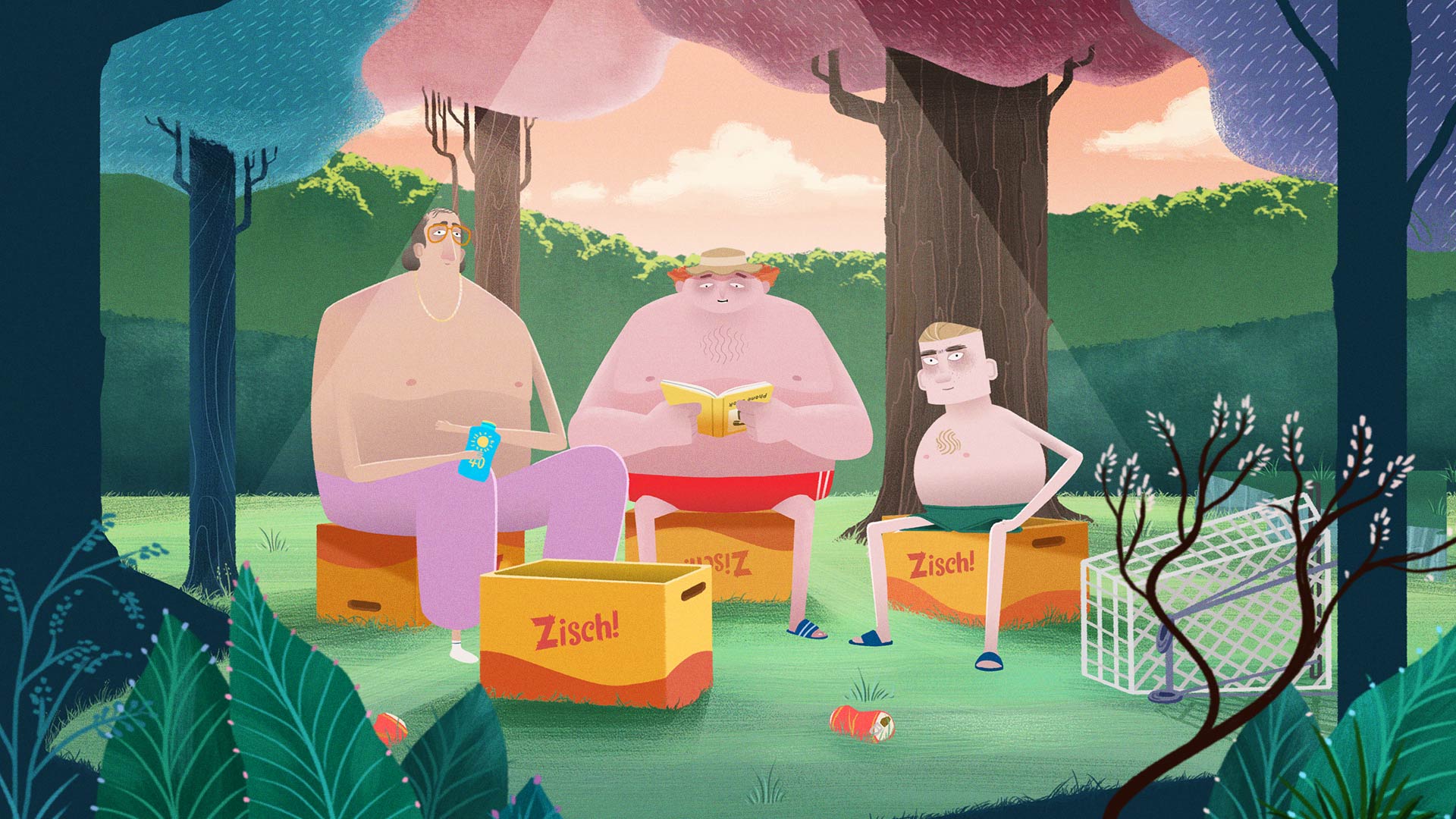 Have you ever longed to take a break from the humdrum repetition of the everyday grind, disrupting the monotony of life with a new experience way off your beaten path? Then perhaps you too should seek out the magical delights of Cornelius Joksch’s Adultland. Created as the Animator / Illustrator’s MA graduation film while at the University of the West of England, Adultland taps into our desire for excitement and the belief that the struggles of the present will garner the future rewards we deserve…or perhaps they wont. Cornelius takes us behind the curtain of  weirdness to reveal the method behind his strange animated journey.

You have a propensity towards the weird in both your animation and illustration work, where would you say that comes from? Is it hard to keep the ‘strange’ from creeping into your client work?

For as long as I can think back, I’ve always been far more interested in things quirky and dark than in handsome characters or linear stories. I remember preferring Jim Henson’s Labyrinth over any Disney film when I was a kid. Me and my sister have watched it so many times. It definitely must have shaped my love for odd characters and episodic narrative. And yes, it can be difficult to keep the strange from creeping into my client work, although that does depend on how slick and mainstream the expected result is.

I initially thought of Adultland as a way more serious and pensive film than it turned out in the end. I must have discarded about 4 different finished animatics before deciding on a bit of a more light-hearted approach. It is a very personal, quirky reflection on adulthood and the search for both meaning and excitement. It is about epic struggles, the disappointment that sometimes comes after, and about how we usually stand up and try again anyway. And in case you don’t see any of that in the film, maybe it might just make you chuckle. That’s more than fine with me.

What was it you felt was lacking in those earlier drafts?

I just felt that, if I wanted to set up my main character properly, give the audience a bit of background story, and then ideally come up with a plot that wasn’t too obvious or anticipated, I would have had to work with a bigger team. Also, the result would probably have been a lot longer than Adultland. I had to work on my own though, so I had to scrap most of my admittedly very ambitious ideas. You could say that the story of Adultland was partly born out of frustration about not being able to make the film I actually had in mind. The ironic tone then just came with that.

What was your production process?

I animated the whole film in After Effects, while everything was designed and illustrated in Photoshop. I usually animate using the DuIK plug in for After Effects which allows me to rig 2-dimensional characters similar to the way you would do it in 3D. For Adultland I tried to avoid the sometimes rigid looks of a rigged 2D-character by animating key poses of rather complicated shots frame-by-frame first. This way I enjoyed creating the movements a lot more, as it was less planned out.

Is that frame-by-frame approach something you plan to take forward to other projects?

I only worked frame-by-frame on certain sequences that I expected to be rather difficult to animate. Each character was rigged in After Effects, which is comparably quick and easy once you’re familiar with it, but I find it also tends to look a bit rigid. Sketching out keyposes really gave me a guideline for the actual movement. I still work that way if I really want to try and get it right.

How long did it take to move through the various stages of production?

I spent a lot of time – about two months – thinking about what kind of film I actually wanted to make. However, production itself took the longest amount of time, proportionally speaking. But it felt a lot more straightforward, as I was pretty clear about the design and colour palette I wanted to use. Same goes for the technique. I worked on Adultland for about 10 months, which was partly due to the odd commercial jobs I was doing on the side.

How do your walks factor into your creative process?

My walks are a massive part of my creative process in general! People often smile when I tell them that I go for walks all the time, but it is only then that my constant thinking feels targeted and productive but still light. It’s also the best way to discover a new city, which Bristol was when I moved there to study for my MA.

Me and my friend Max Roof, who I met during my BA, are thinking about starting a collective, which effectively means that we’re going to collaborate on our next short film (working title is Magic Moss). We have a few ideas flying around, but nothing concrete as yet. Max shares my quirky sense of humour, so it’s probably going to be something on the edge of being unwatchable!