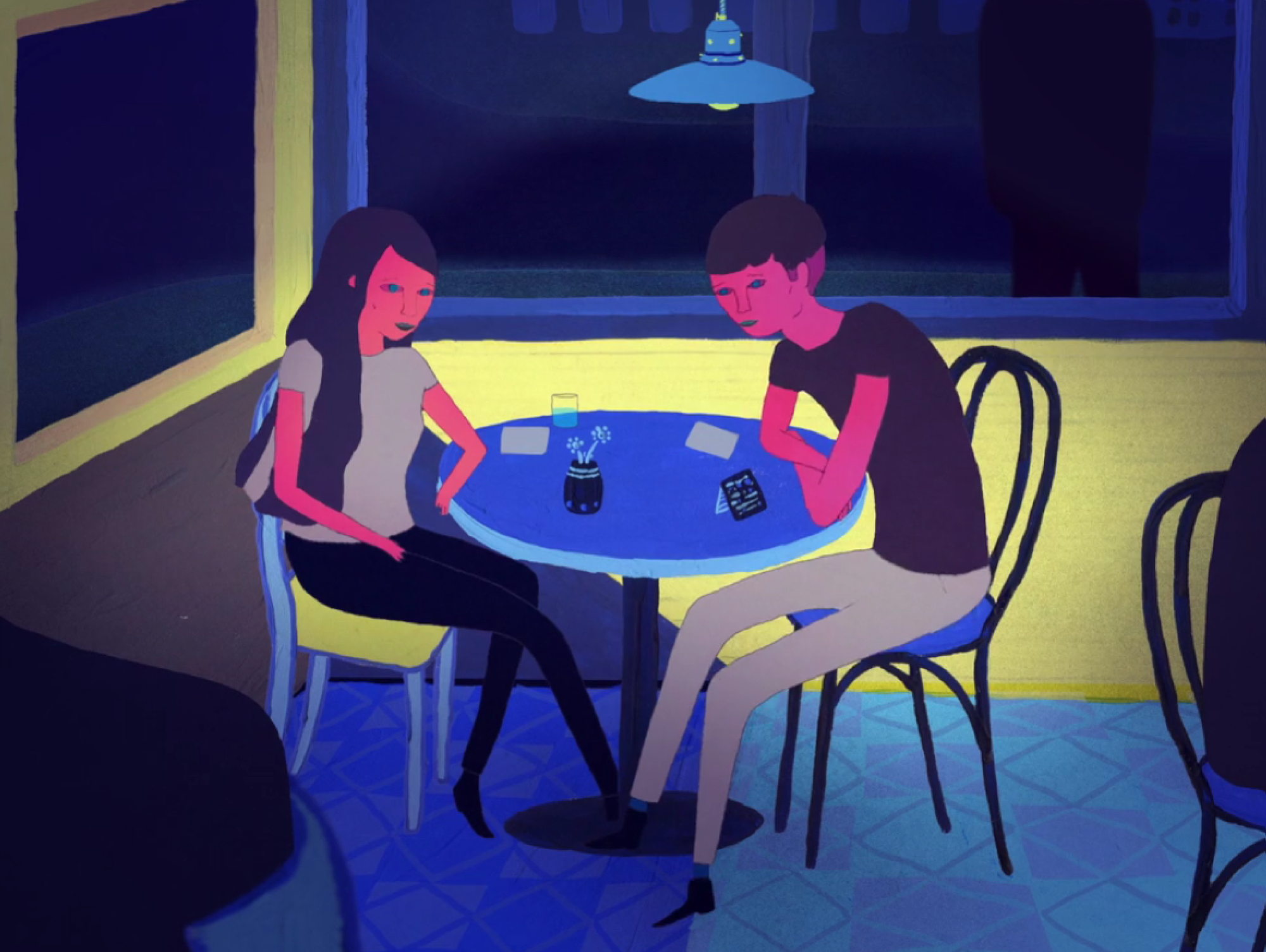 If you’ve ever made the progression from swiping right to a face to face date, you’ll know that even the best of them involve a heavy dose of toe curling awkwardness, as each side gently probes the other whilst attempting to stop their game face from slipping. Harnessing those early tentative conversational gambits before peeling back the layers to reveal the strangeness within, Zachary Zezima’s It’s a Date expresses our shared desire for the understanding and acceptance of others, no matter where we’re from. We caught up with Zachary ahead of It’s a Date’s festival premiere to discover more about the creation of his neon tale of romantic hopefuls.

Circle Line Projects started a while ago as a small experiment between my good friend Ana Mouyis and myself. We did some self-directed projects together, and then she was offered to animate a music video and thought it would be a good chance for us to collaborate. A year or two later, our mutual friend Tim Brown brought us on to do a music video with him as well and the three of us worked so well together that we just haven’t stopped! Working within a group is great, not only because animation is so time consuming and any extra help is much needed, but also because there are always people nearby to learn and gain advice from. CLP’s work is pretty different from my own in that it is a true conglomeration of three people’s ideas and skills, while my work is just me. There’s always a push and pull when working with Tim and Ana and we all have to compromise, but it usually yields a more interesting result than if just one of us worked on the same project alone. Their work actually also makes a short cameo appearance in my new film – see if you can spot it!

Despite It’s a Date’s fantastical elements it’s at least in part ‘based on a true story’. What’s the truth that inspired the idea and how did the more surreal elements work their way into the tale?

The story itself is part truth and part fiction. A friend of mine actually went out with a man who revealed on their first date that he’s an alien, and then tried to prove it by cutting his arm and burning off his skin at the table. The rest of the film (flashbacks, fantasies and memories) are all my inventions to enhance the internal worlds of the two characters. The idea of an alien on a date is obviously an interesting one to me, but it’s more of a backdrop to a deeper story of attempted connection, misperceptions, and ultimately, rejection. 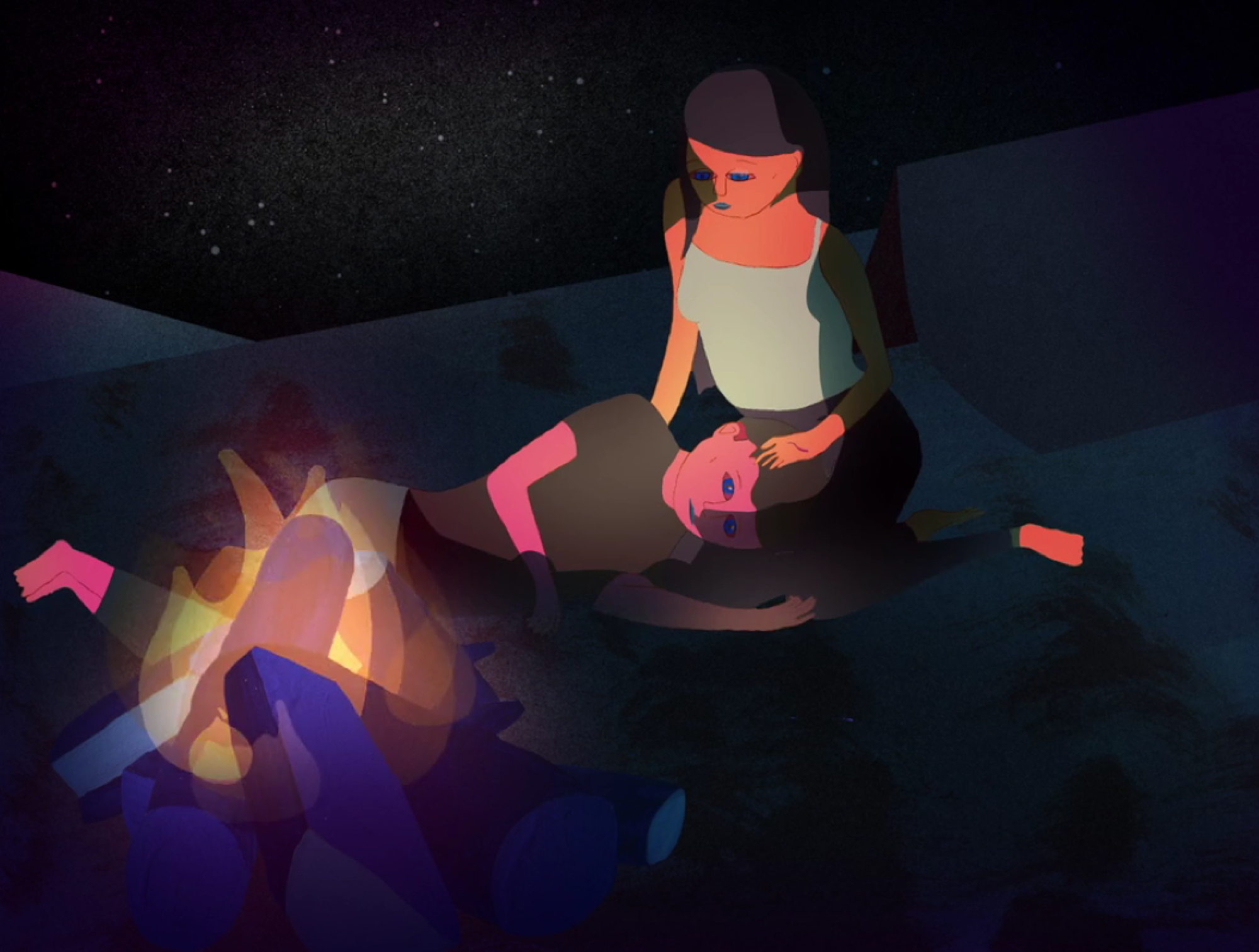 To me this film feels more visually constrained than your previous short CRUISING. How do you feel your style has develop in the intervening years between those projects?

CRUISING was my first film and the production process was relatively quick (about 3 months), which is why it is so visually frenetic and varied. I spent two years on this new film, which really allowed me to hone in on a consistent look and feel overall. I think my style has become more realistic and tangible, while it use to be more graphic.

Both films could be said to draw from the awkwardness of life, what interests you about the uncomfortable situations we sometimes find ourselves in?

I find myself trying to create stories or worlds from scratch and it just doesn’t work. I think life hands us interesting situations every day and I sometimes feel a responsibility to have others experience the same thing, whether it’s through a photo, video, or in this case animated film. Life itself is weird on its own and I like harnessing and recreating that in my own way.

Life itself is weird on its own and I like harnessing and recreating that in my own way.

Tim Brown and Angela Stempel’s voice acting perfectly encapsulates that hesitant, nervousness of a first date, how did you direct those performances?

I actually did the voice recording three times. Not because their performances were lacking, but because I kept changing things and reorganizing their conversation and story. I animated to their performance, but along the way would realize I needed a new scene or a certain inflection that I didn’t have. Tim and Angela were great and had no problem doing this over and over and over for me. I chose them mostly for their voice quality and I just wanted them to talk how they normally do. My direction was minimal and they are friends in real life. There wasn’t much acting involved, so if you ever meet them in person they will sound very familiar to you.

It’s a Date unfolds within a 4:3 frame in an unreal but appealing neon pastel palette. How would you say those stylistic choices inform and enrich the wider narrative?

I was trained as an illustrator before moving to animation, so I really applied those skills when making this film. I tried to compose and orient each shot to tell a story within itself, and hopefully give the viewer some sort of new information every time the camera moved. Through color, light, perspective and scale, each section of the film was planned to evoke a certain kind of emotion in the viewer. Overall, I used a 4:3 ratio instead of the standard 16:9 widescreen in order to convey a more claustrophobic and ‘full’ feeling, hopefully enhancing the general anxiety of the film. I also went for a more childlike approach to the animation itself. Usually while animating an animator will check his or her work to make sure the movement is fluid or natural, but I didn’t do this. The way the animation turned out is the way I used it in the film. I feel like the naive quality of the animation and characters makes them more approachable and relatable within a kind of dark and morose setting.

What was your animation process?

First I painted all the backgrounds with gouache, and used Cinema4D for some of the restaurant shots. For the animation, I drew with pencil on paper, then colored digitally with Photoshop and composited everything together in After Effects.

I’m working on a few freelance projects now, but I also have a new film in the works. It’s very early days though so for now, I’ll have to stay mum!

You can catch It’s a Date on the big screen on 25th September and 2nd October at the Raindance Film Festival.