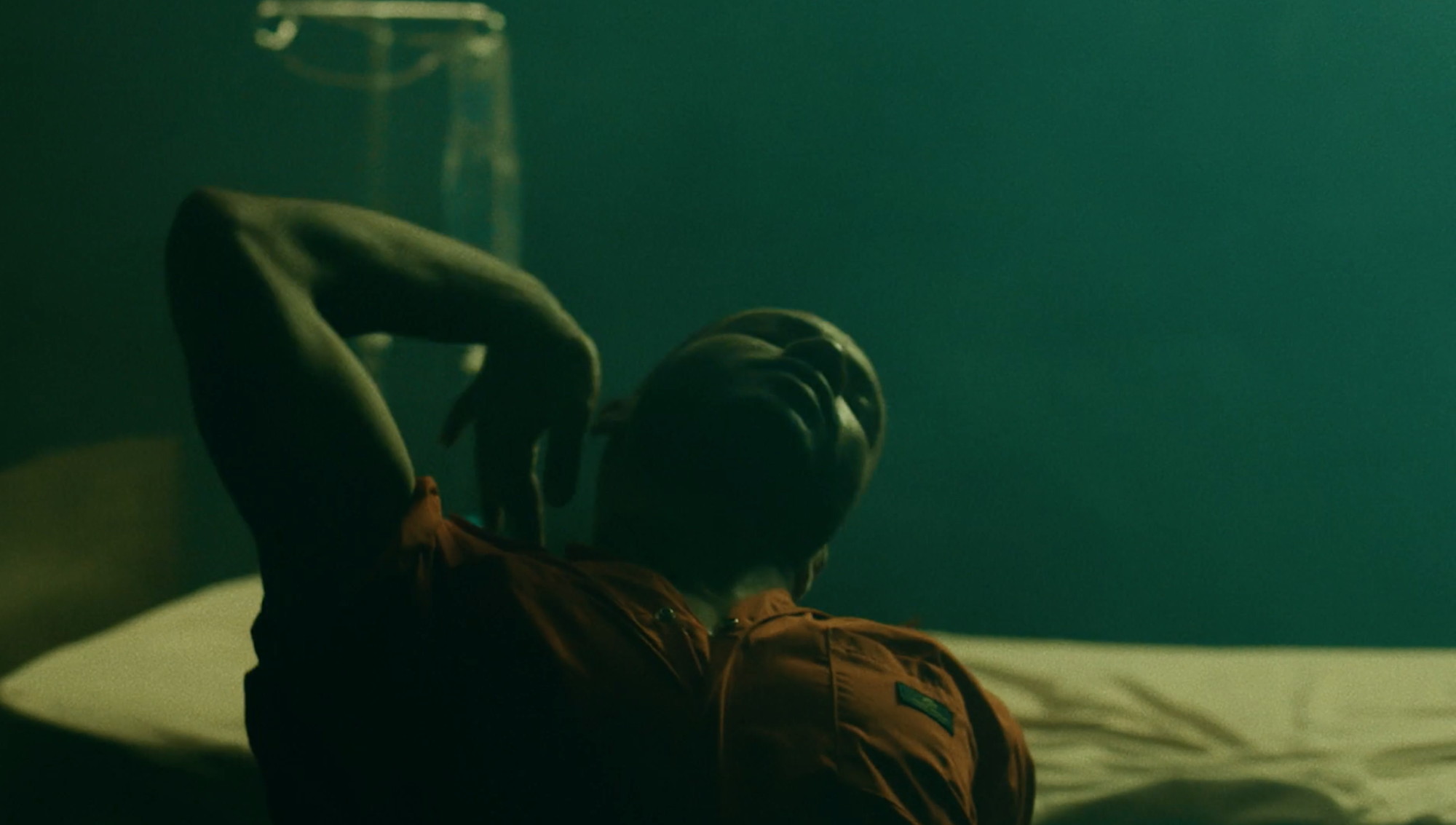 In Arcadian, a music video created for Seattle-based electronic-music producer Symbion Project, Director Sherif R. Alabede presents a dual narrative which slips between the reality and fantasy existence of a death row prisoner headed for execution. Ahead of Arcadian’s SXSW screening next month, Sherif shares how he and his team transformed a decommissioned prison into a pink neon-infused world of combative choreography.

What led to the prison setting for Arcadian?

My initial approach to Arcadian was to craft something that muddled the line between fantasy and reality. My early discussion with the artist, Symbion Project, consisted of themes of transition, escapism, and transformation. Therefore, basing the story in a prison setting was key to conveying all the aforementioned themes. However, it was very important that we based each world, the prisoner’s fantasy or reality, in a grounded setting.

Were there specific references you drew from when designing the visual styles of the prisoner’s dual states?

For the reality-based stuff, we borrowed a lot of the visual style from the David Fincher film, Se7en. The plan was to shoot on celluloid for the reality-based scenes and to shoot digital for the neon pink fantasy sequences. However, due to budgetary constraints, we settled on digital for the entire shoot. Employing soft Cooke S4 lenses, we captured the grungy interiors by often throwing sickly green hues on the walls, or blasting a teal or sometimes warm sodium vapor light through the windows. It was good to know that the Arri Alexa captures rich blacks. Therefore, we would do things like obscure the faces of our subjects to stay consistent with the neo-noir look of Se7en. My DP Matthew Plaxco is the one to thank for that.

Also, the location we shot in was a true gem. The Sybil Brand Prison is in Los Angeles and has been decommissioned for many years now. The textured walls and haunting halls just gave it this eerie feeling. So it was a real challenge creating the fantasy look. Therefore, we employed an army of PAs to paint an entire cell block pink. My Producers Andrea Sastoque and Ariel Navarrete had to jump in to accelerate the process since we had no time. As such, those fantasy scenes took on this whimsical yet grim aesthetic. Overall, Arcadian was a labor of love that took weeks of intensive prep and rehearsals. We’re preparing a DCP for our SXSW screening and needlessly to say, seeing it projected on the big screen gets me all giddy and nostalgic.

Keeping in step with the distinction between fantasy and reality, how was the choreography for each segment developed?

I enlisted the choreography of Marcos Aguirre, who is just an all-around force when it comes to dancing. Also, he had a working relationship with the artist, Symbion Project. Funny enough, the one piece of direction was to make both the fantasy and reality-based segments ‘combative’. Since the prisoner is fighting for his life, it was necessary for the reality-based sequence to have a more aggressive and combative style of dancing. Therefore, the dance was fashioned almost like someone engaged in hand-in-hand combat.

It was very important that we based each world, the prisoner’s fantasy or reality, in a grounded setting.

Going on that same methodology, the fantasy sequence was a different kind of combat. As the prisoner (the lead) slowly realizes he’s transitioning from one life to the next, he becomes hesitant and almost reluctant to buy that he is facing death. The dance featured here had to be of resistance, unacceptance, and fear. So he is shown in a uniformed choreography with two other dancers I refer to as the guardian angels. The choreography goes from a synced performance to breaking out into freestyle – showing harmony and chaos coalescing as one, if you will.

What qualities were you looking for when casting your dancers, how did you find them?

Marcos Aguirre is embedded in the dance scene in Los Angeles, so I relied on him when we began the casting process. It was a no-brainer with Marcos’ look to cast him as the lead. Also, Marcos is beyond gentle and soft spoken, so there was a little bit of fear whether or not he could embody a harden criminal. I believe he pulled it off very well. It was important we cast two other women who would stand their ground and be assertive when facing off with Marcos in the fantasy sequence. So I mainly went by instinct and cast by attitudes.

When it came to the edit, how did you approach cutting in relation to maintaining the dance sequences as choreographed?

The assembly was fairly simple by design. I knew going in, I would employ long takes in filming the choreography and break them up by getting tighter coverage. Therefore, in assembling the dance sequence I had perfect continuity. So when a performance seemed slow, I would either lose a few steps to fit the music or jump to medium shots to accommodate the timeline. I guess it’s cheating lol. It’s good to mention that we shot the entire video at 48 frames per second. It gave it a dreamy quality but also, cutting-wise, it forced me to stick to a formalist way of editing – Wide, medium and close-ups.

What are you up to next?

I’m not at liberty to say, but it’s a brand film 😉