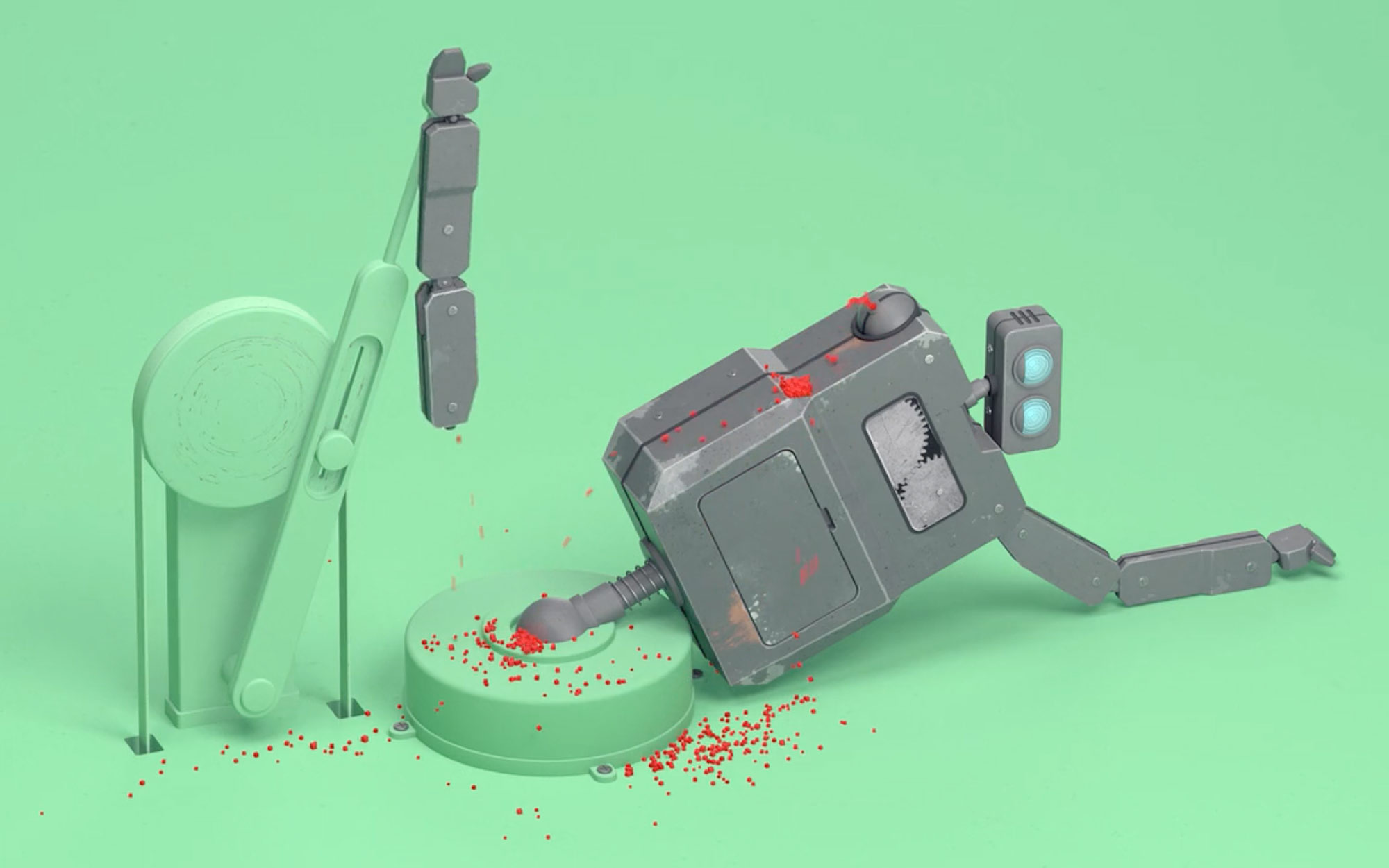 Michael Marczewski is a Motion Designer and Director working at ManvsMachine, a Cannes Gold Lion award winning design and motion studio based in London. However Michael’s new film, Vicious Cycle, is a passion project that features cute robots driven by exponentially malfunctioning mechanisms which comedically destroy the lovable bots. I sat down with Michael to pick his brains about how he conjured a particular aesthetic style to lull the audience into a false sense of automated security.

How did you design the mechanical constructions for Vicious Cycle?

I have always been really interested in intricate mechanisms when I was a kid I would play with Lego Technics and make weird and wonderful little mechanisms and now I’m an adult playing around in 3D software to make weird and wonderful little mechanisms! The idea of the film grew from these little tests. I wanted them to be fairly intricate and interesting to watch but not overly complicated, that way the viewer can fully understand how they are working and nothing is hidden. I wanted it to look like each set up could be built as a little model in real life and work perfectly.

A lot of your animations seem to feature technology malfunctioning – what’s your fascination with this theme? Is this something that concerns you for the future?

I don’t think it’s a concern of mine, at least not consciously! However, thinking about it, I do love films that touch on that subject, such as The Terminator and The Matrix. I do think the malfunctioning aspect provides an opportunity for comedic moments. But also, the robots in this film show no real signs of life until the end when one of them is crawling away unaided. Up until then, all the movements are generated from the mechanisms that they are connected to, so it’s interesting how emotionally attached a viewer can get to these lifeless beings.

Can you tell us a bit about the aesthetics of the piece and your thought process when selecting the colour pallet?

I wanted the film to have a cute and cuddly look that would lull the audience into a false sense of security! It makes it more impactful when things start to get a bit violent, it can take people off guard and hopefully gives the film another level of engagement. I wanted the film to look fairly colourful, but I kept the palette quite pastelly to not totally stray away from the sombre tone of the film.

How did your collaboration with Marcus Olsson come into being? Did you know what type of music you wanted before you approached him or did he guide the score?

No, I haven’t worked with him before but I’d come across his work several times in the past and really loved it. I emailed him on the off chance that he might want to do it, and thankfully he really loved the film and, even though he’s a busy man, he really wanted to be involved! A particular piece of his that springs to mind which made me a fan of his work was the sound design he did for MTV Strugglers by Zeitguised. I had a few ideas for the score, one being that the beats could hit on certain movements of the mechanisms. However, I wanted Marcus to interpret the film in his own way and have freedom to make the music as he saw fit. As the film progresses he made the sync points between the audio and the visuals become more and more offset and irregular which makes it more unsettling and foreboding that things are going south!

I wanted the film to have a cute and cuddly look that would lull the audience into a false sense of security!

The music you outsourced, but the sound design you did yourself…

In this particular situation, as I didn’t have any budget for the film, I had to compromise with Marcus and I offered to do the sound design as a bit of a deal sweetener. This let him concentrate on the music in his limited time between client work at Kungen & Hertigen, as the sound design was going to be a bit fiddly and too time-consuming for him as a ‘passion project’!

You have a wide portfolio of short films, do you have any ambitions to transition to features?

For now, I’m happy doing shorts as they give me more freedom, and I’m not tied down for too long. I often work on up to 3 or 4 films at once and one gradually becomes the favourite and I then concentrate on that solely. It’s the survival of the fittest, or funniest! I think I easily get fidgety to explore other ideas, but I’m also constantly thinking, “Is this idea interesting enough to spend this much time on?” I have quite a few films and ideas that have had to be stored away and I may blow the dust off them one day and finish them. An example of this is Night Rush, a film that I had to give up on as it was turning a bit too epic, I ended up releasing it as a ‘fake’ trailer. Of course, I wouldn’t turn down the opportunity to direct a feature! But as my shorts have all been very self-contained, in the sense that I do mostly everything myself, apart from the music, I think future shorts I do need to be more collaborative.

What’s next on the agenda and what goals do you have for the future?

I have a couple of ideas for new shorts, however, they are a lot bigger in scale and I’m hoping to collaborate with others in order to achieve that vision. And also work out the logistics and feasibility of them! I’m a fan of incorporating live action footage in my work, I’ve dabbled a lot with motion tracking and that’s something I’d really like to integrate into a future project.

And just a quick one, I notice you have a live video installation recreating the floating pen sequence from Stanley Kubrick’s 2001 on your Vimeo channel, what’s the story behind that?

That is an installation I made back in 2010 at Chelsea College of Arts. I’ve always been fascinated with special effects in films and I was reading a book about the various practical techniques that were used in 2001. It described how they stuck a pen on a plane of glass and rotated it in front of the camera lens to give the illusion of it floating in zero gravity. I found it funny how simply it was done but also how the effect only worked from that one forced perspective. I recreated the shot in miniature, allowing the audience to view the sculpture and also the live-fed footage. I like the idea that sometimes the mechanism behind an effect can be just as, or sometimes even more, interesting than the finished effect.