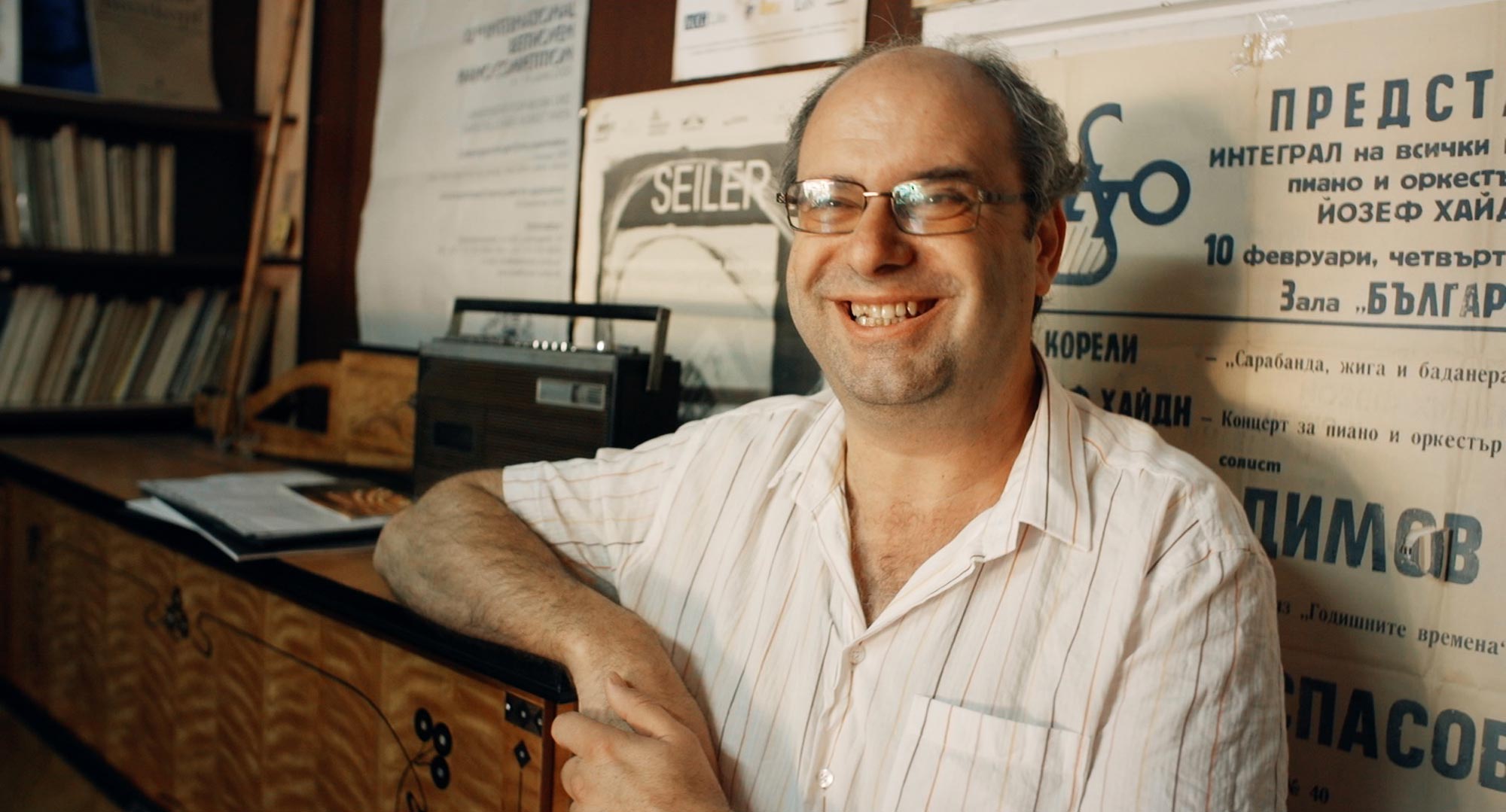 A skilled restorer and seller of pianos and the engaging focus of Kevork Aslanyan’s short documentary Balkan Royal, Peter Dimitrov still longs to fulfil his dream of a life in the spotlight as a well known conductor. Below, Kevork tells DN why you should always listen to your producer and how an unwanted piano led to the the discovery of the aspirational subject of his first foray into the world of documentary filmmaking.

The year is 2015, at home we have a piano and we haven’t got any skills to play – we primarily used it as something to put stuff on – so we have decided to get rid of it somehow. We live in a block, on the last (4th) floor, without an elevator. That is a challenge, everyone who has a piano knows what I am talking about. At that moment Rozaliya Dimitrova (Producer of the film and my fair-lady) suggests we post an ad and try to sell it. That is how we met Peter Dimitrov. He came, looked at the piano, played it for a while and said, “I strongly suggest you don’t sell this one. It is an amazing instrument. You need to preserve it and that is all.” We didn’t know what to do, so he suggested we think on that and left.

We took our time and decided to move forward and sell it. At least someone who wants to play would use it (a child has it now). This is when Peter came with his guys and just like orchestra conductor he commanded the guys together with the piano on the stairways and in just few minutes they moved it out of the apartment and off the block onto their van. We were blown away by what we just saw and happy that the piano was gone.

That is when the idea came up, of course not by me, by Rozaliya who was out of her body at this moment. She said that I had to make a film about the guy! I had just finished Getting Fat in a Healthy Way and wasn’t quite into documentary filmmaking at all and to be quite honest, was scared to make a non-fictional work. I said, “No way. I am a fiction filmmaker! I won’t do a doc. Absolutely not!” She was quite persuasive and I said – YES in the end. That’s how it all started!

No way. I am a fiction filmmaker! I won’t do a doc. Absolutely not! 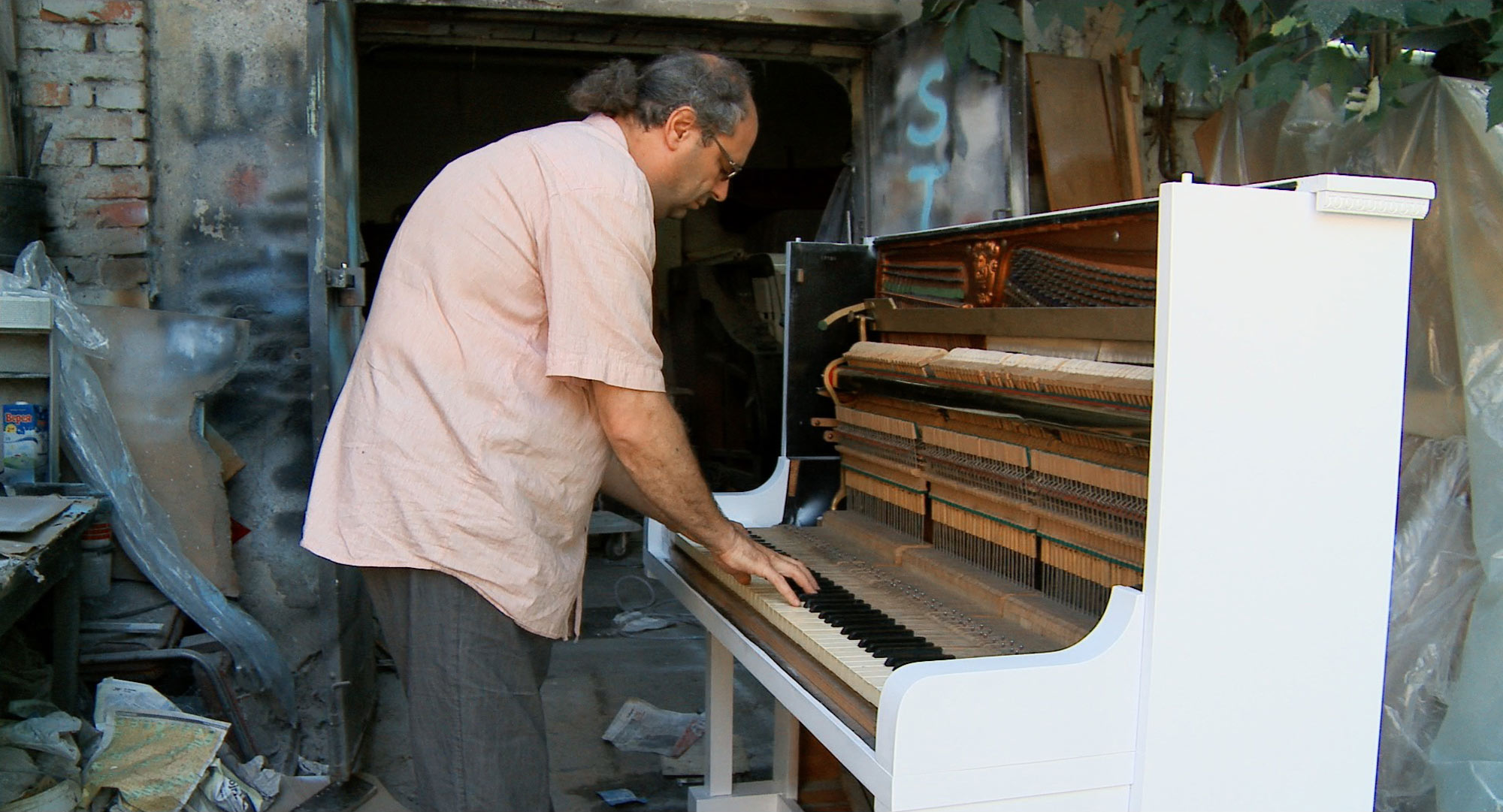 I went to Peter’s shop, pretty nervous and shared with him that we wanted to make a film about him. He accepted momentarily without any doubts or conditions. He was very open minded about it. I was prepared to talk to him about what a great opportunity it would be for him… I was speechless. We agreed to meet and chat for a while and it took about 2-3 months to create a script – more like a script structure – to have the blueprint for the story.

Funny thing is that I told Rozaliya I was ready to shoot after the first 2 weeks. She was pushy and producing at her best and asked for a script…I had nothing then so I got back to the meetings and concentrated on working more on the upcoming script. Quite different from fiction, but in a lot of ways the same. You need to have the “What do you want to say with this film?” sentence.

Budgeting meant that we needed to shoot the whole thing in 3 days. We had no money for this project and this is where our vacation (going to the seaside) money went. So we missed the sea that year 🙂 We agreed, with the small crew that we hired, to financially cover only 1 shooting day. All of them were OK with those conditions. They were friends, but for us it was important to cover at least the bare minimum. All of those guys are professionals in their filed of work. We got the equipment from a friend called Asen Sokolov who owns a small production company called SpeedRazor. Same deal with him, he gave us the equipment for the price of 1 shooting day.

It was experiment on a lot of levels. I told the guys that the direction was punk-shooting-style camera in the classical music genre. I assured them that I didn’t care if there were reflections of the crew, mics, etc… I wanted all of that in the film. Punk! 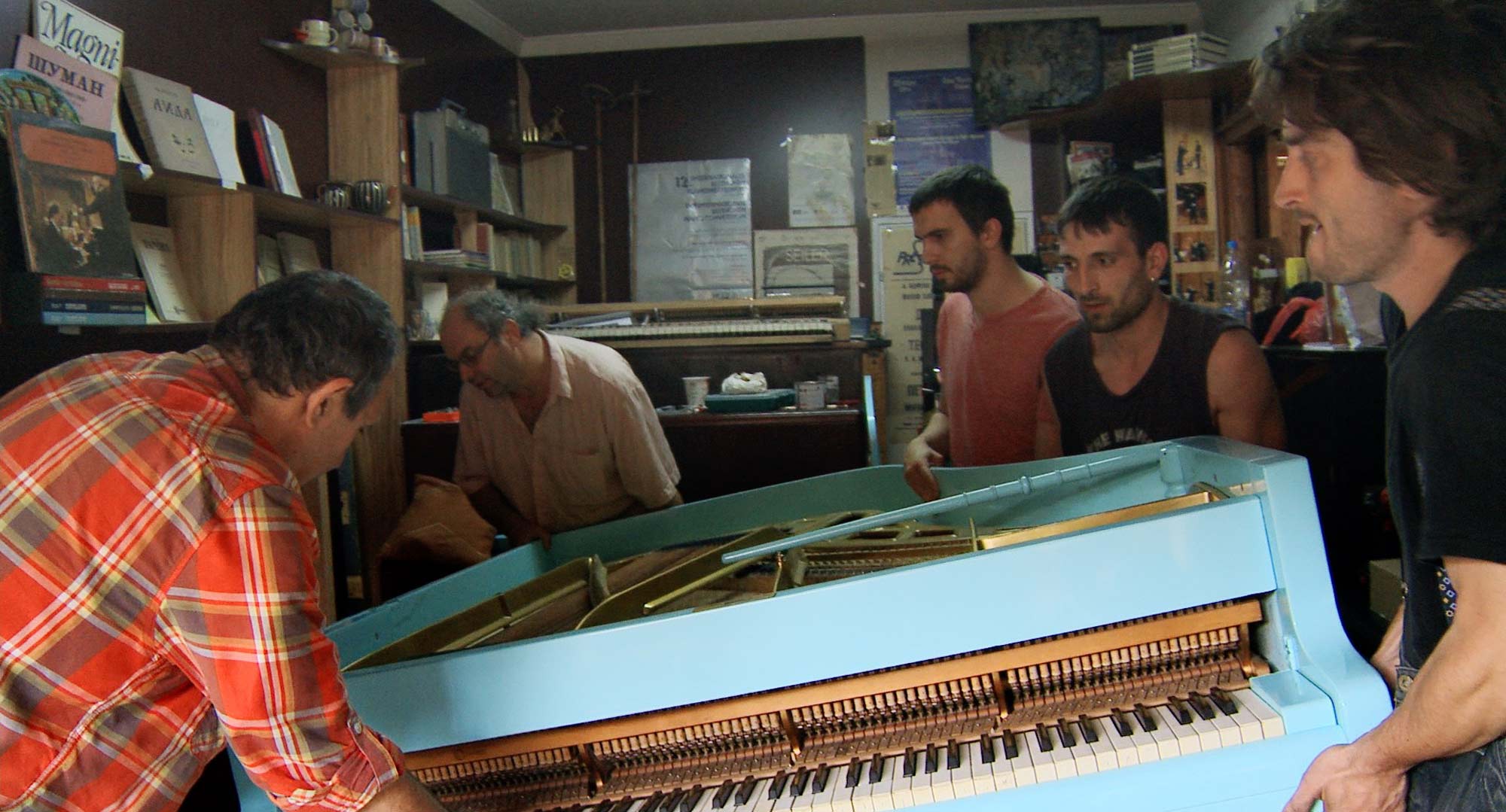 We used a Sony FS700 with Samyang lenses for the majority of the shoot and a Sony EX3 for one of the days. That was an accident. We went with the DOP (Kiril Prodanov) to scout the locations and the shop so that he could think about it. The guys were super busy at the shop and working on a grand piano. They were in a hurry because the instrument had to be shipped the same day. Kiril looked at me and just like magic took out his personal camera from his backpack. This is how we got an extra half day of shooting! All of that day went into the final edit. That was pure luck!

There is one shot I captured on an iPhone 4S. This was made for the bonus day… we were so excited that we were capturing the guys in a stressful situation that we forgot to shoot a wide shot of what was happening.

The sound guy (Mihail Dichev) who recorded and afterwards made the mix of the film wanted to record on set and he did it for the first time in his life. He’s been doing post-production for a long time and was quite curious about what the challenge was there. After 30 minutes of shooting he was shaking like crazy, as we were shooting hand-healed and running after Peter. I think he lost like 2-4 kilos over the shoot. 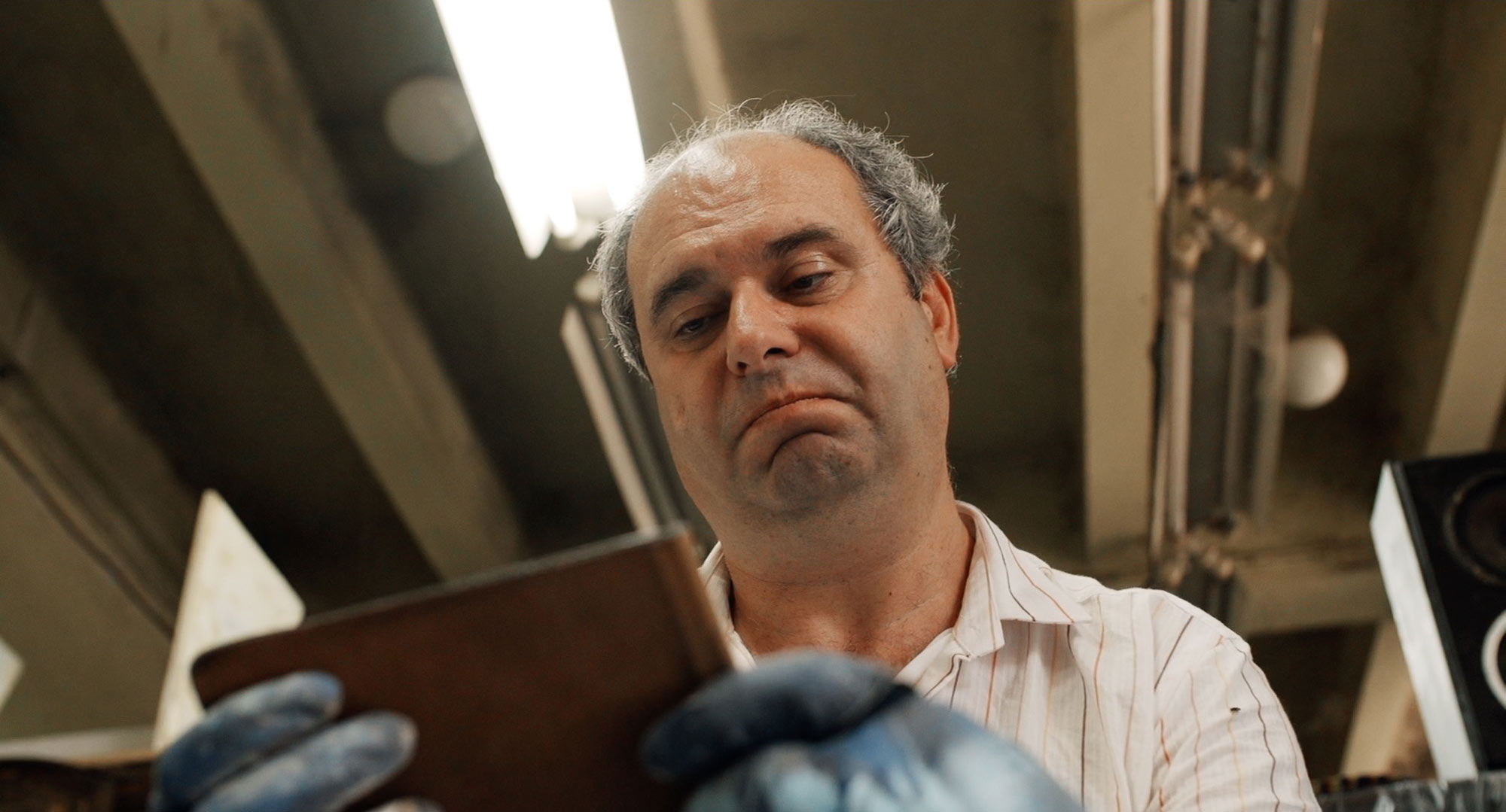 I edited the film on a 13” MacBook Pro (Retina, 13-inch, Late 2013) with a FCP X for about 2-3 weeks. We watched it with Rozaliya and decided not to work on it for a while. I think 2-3 months passed then we rewatched it again, cut out 5 minutes and said that this was the final edit. We then proceeded to color grade and sound mix. Compared to Getting Fat in a Healthy Way which had many pre screenings, Balkan Royal was shown to just a few people.

The grader who did the corrections is a friend (Doychin Margoevski). We’ve known each other for a while and worked together on different projects back when I as mainly working as an editor. He works at Company3 and I think he did the grade there. So I can say that a major grading company did our film 🙂

With this film I learned to follow my gut even more and to relay on my instincts. In general this is a film I had great pleasure making and I think people that enjoy it from beginning to end can see all of the ingredients that are specifically designed to be in this Balkan dish.