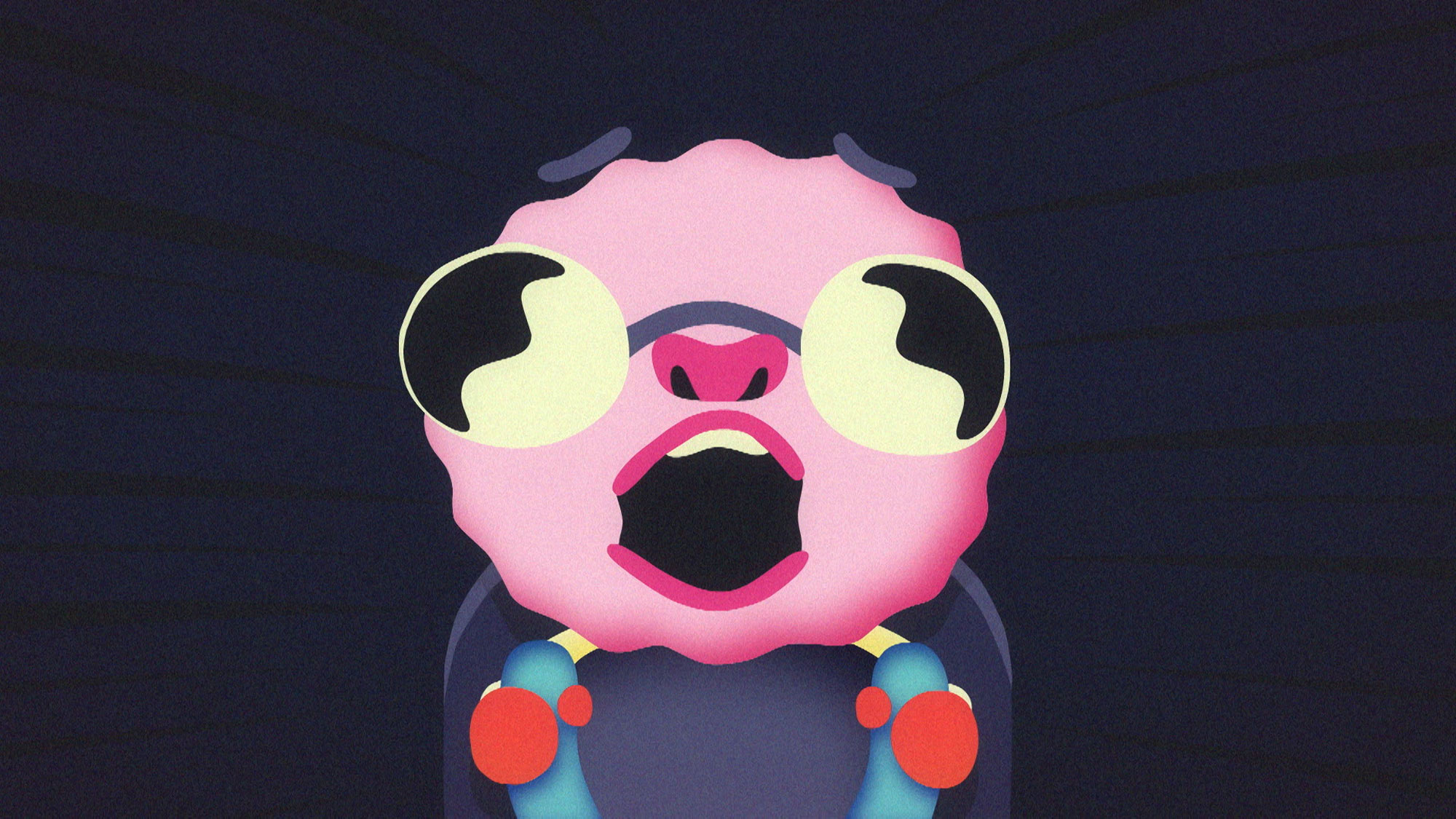 Traversing the void of space to arrive in the hip hop-verse of the the De La Solar system, Leap of Faith sees an animated Mr Jukes strap in for a psychedelic trip into the cosmos. Strange Beast Director, Animator and Graphic Artist Parallel Teeth (aka Robert Wallace), was kind enough to turn his attention from the stars in order to speak to DN about the differences between his still and motion projects, as well as the technical challenges of creating hypnotic colour sequences which don’t cause audience seizures.

How much of a distinction lies between the motion and illustration projects you create and how often do projects jump from one discipline to another?

There’s definitely a lot of cross over with the idea process between them both, however I find illustration involves a lot more careful planning. Animation has the added dimension of time to communicate a message or theme through motion and editing. Whereas with illustration you’re working with a static visual hierarchy, so you really have to craft the layout carefully.

I’ve had a few projects that start as videos and move into illustration work. This is mainly with musicians that want a coherent visual voice. The last Ladi6 video, Beffy, is a good example of this. After the video they wanted designs for a 7” single vinyl, a follow up EP, and an adaptable pattern. It was a fun challenge to take ideas from the video and build them out into a bigger world.

Illustration projects usually end up influencing my motion work more indirectly. I might use them to explore a different type of character design or visual approach. When I’m brainstorming ideas for video work I’ll look through old sketch books and doodles to see if any stand out and connect with the brief.

What was the inspiration and development of this psychedelic trip to the De La solar system?

Jack Steadman, aka Mr Jukes, wanted the video to have a cosmic theme featuring planets, moons, etc. He’d been playing Kerbal Space Program, a video game about building and flying rocket ships. He was also taken by Wassily Kandinsky’s Bauhaus-era paintings, with their abstract forms and colourful textures.

I took these ideas and created a structure for the video that championed the animated performances by De La Soul and Horace Andy, while working in a loose narrative for Jack that helped thread it all together. While acting as the thread through out, Jack also added a comedic element. Inspired by Minion memes, Jack is all about body humour and big expressions.

Jack is all about body humour and big expressions.

Lastly the music itself was a big influence on the structure. Visually replicating the numerous drum fills, looping vocal takes and upbeat synth melody were key elements in working out the direction the video took.

This marks the second video you’ve made for Mr Jukes, were there elements from the earlier Grant Green that the two of you wanted to build on for this project?

The previous video for Mr Jukes, Grant Green, had a strong psychedelic feel to it, we were all keen to explore this approach further with this new video. While the last one was much more rooted in semi-reality, using location and human proportions inspired by the real world, for this video we wanted to pushed it further. It has the strongest connection to the abstract breakdown during Grant Green, which used repeating patterns and abstract shapes to create faces. Leap of Faith took this approach as a starting point to build on.

Leap of Faith is awash with a dazzling collage of flowing colours which pulse hypnotically through one another. What considerations guided your hand when building the palette and later orchestrating their progression in motion?

The platte needed to be punchy to match the upbeat tone of the track. Mixing these bright colours with a backdrop of deep blacks helped create an appearance of vast space. The colour palette was fairly minimal, ten colours in total featuring five main hues. Mixing the colours with different gradients and glows meant a much larger amount of variety could be created.

When making the hypnotic patterns, the colours were applied in a way that matched the music. Puncher combos were saved for moments when the track is building. The only part where this ran into problems was the very end which failed the Harding test multiple times. In the end the colour combinations had to be simplified during this part to make sure it didn’t cause any seizures.

And finally, could you walk us through the 2D animation production processes you used to complete the film?

After the initial idea and character sketches were developed I made a breakdown of the song. It’s a graph that maps out the songs progression and is a great tool for putting together a structure for the visuals. It helps highlight any parts of the idea which need fleshing out or when the visuals should change to replicate the musically shifts.

From there a rough boardomatic was built. I don’t usually make storyboards for music videos, and instead skip directly to the this step. The songs structure is the most important part. It really dictates what can appear in the video and how the narrative works around it.

All of the shots were then animated in Flash before bringing into After Effects as separate layers to texture, add glows and create gradients. Overall the project took roughly eight weeks to complete.