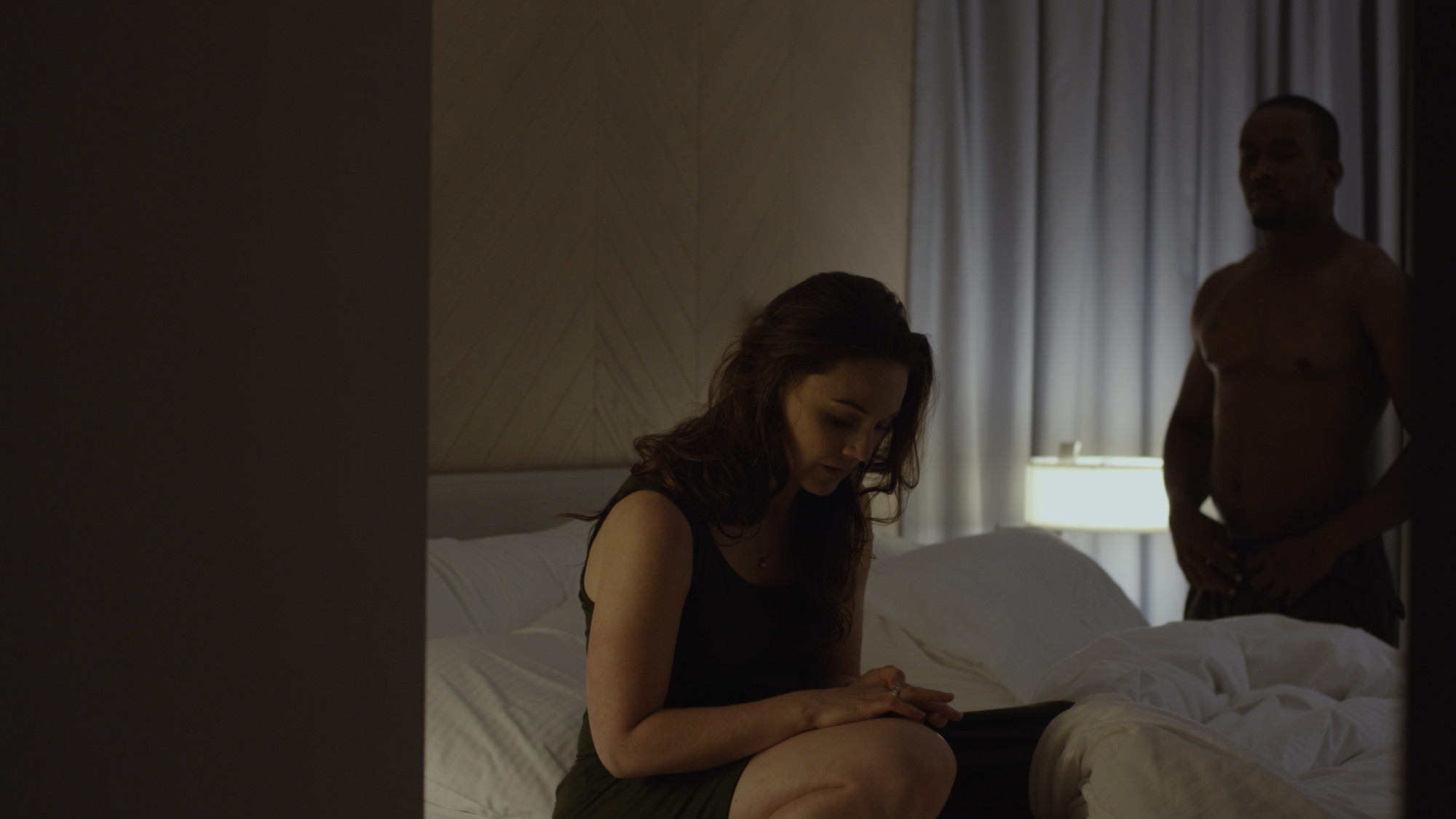 Proving both the diverse and prodigious nature of his filmmaking Nickolas Duarte returns to DN a few short months since his last visit with another short hot from the Crown Chimp production slate. This time round he brings us melancholic character drama Trouble Will Find Her, featuring a woman adrift in Toronto with the guilt over the life she unceremoniously left behind threatening to submerge her. In the following interview Nick explains how he was able to embody guilt as a foreboding, pervasive presence which stirred an emotional turbulence beneath his character’s seemingly serene demeanour.

Was there an inciting incident which spurred you tell this story of female guilt and escape?

Being raised Catholic, I think guilt and shame are pretty primary emotions and states of being. At least for me. Guilt is an odd, strange emotion and something I’m always trying to wrap my head around. That element was a core part of the story since the first early notes. Guilt and responsibilities and the burdens we place on ourselves are all really interesting things to me.

I honestly didn’t think of it as specifically female guilt until I showed an early cut of it to one of my female friends. She thought it really touched on a double-standard and this extra-layer of guilt that was shrouded over the main character because of certain maternal expectations. After I got that note, that become something we explored further in the edit.

As a performance driven piece a lot rests on the shoulders of actor Sarah Horsman. What was the working process like between the two of you which engendered her consistency throughout?

So much of the actor-director relationship comes down to trust. Specifically the actor is saying to the director “I trust you to not make me look stupid, to be honest with me, and to tell a good story”, and the director is saying back “I trust you to not put ego and insecurity ahead of the story we’re trying to tell”. That trust is something that’s really important to me – listen, at the end of the day, it’s not my likeness that’s on screen. I don’t take the trust an actor gives me lightly at all. I think me and Sarah established that trust pretty quickly.

At the end of the day, it’s not my likeness that’s on screen. I don’t take the trust an actor gives me lightly at all.

This was one of her first film roles but she’s a very accomplished musical theatre actress. She quickly got the ‘difference’ between being on the stage and being in front of the camera. That clicked real fast for her. Consistency was never an issue – she’s been used to performing complicated routines/blocking/lines/songs night after night for months. Keeping a character tone consistent for a couple shooting days I imagine was a breeze. 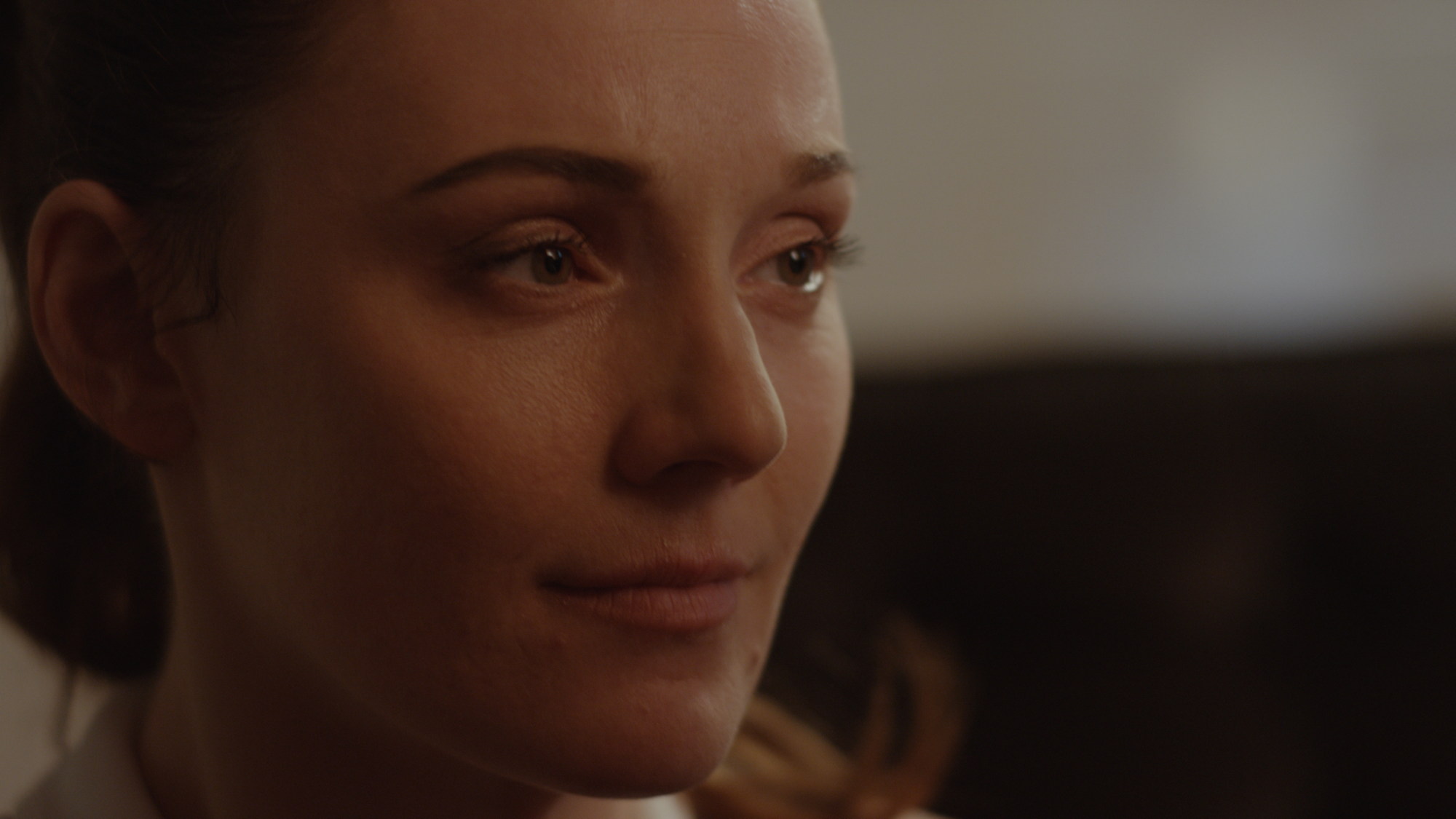 Musicality played a large role in our communication. I could put a song in her earbuds and say something like “You feel like this song”. Or throw out an idea of her singing to her scene partner. We’ve worked on a couple projects together since then and that musicality has been a nice foundation for us to build on. She’s incredibly talented and emotes with very little effort – which is so important for a story focused on a character’s inner life.

Finding an editing and visual style which mirrored Julia’s journey was at the forefront of your mind with this project. Could you explain how that guiding desire practically translated into the stylistic decisions you made on set.

The goal was to create visuals that matched her inner life, right. I wanted to shoot this more like a traditional suspense/thriller than a family drama. Nothing overt but treat guilt like this invisible intruder. My DP (Kristofer Bonnell) and I established some rules. Shadows and negative fill would play a major role. Every shot would be composed to focus entirely on the Julia character – or at least the scene would always be told with her as the perspective. We’d go long lens with the camera farther back and locked off or we would go medium lens hand held and in the moment. The decision being – Is this a moment where she’s trying to distance herself or is it one where she’s feeling more vulnerable?

You worked with an entirely new crew this time, how did that level of unfamiliarity alter your regular way of working on set with known collaborators?

I think on every project I’ve done, I’ve always had at least one person I knew, cast or crew. This was the first time where I’ve worked with completely new people. I initially went to Toronto for a commercial job. Andre Fitsialos (the main producer on Trouble) was the Line Producer on the commercial. Kris was the DP on the commercial as well so I had already spent time with both of them on the phone prepping for the commercial shoot. Then we got to know each other once I arrived in town to prep in person.

Sarah auditioned for the commercial so I had already seen her on tape. Then we met during callbacks and I cast her on the spot. We got to spend some time talking about Trouble separately as well. So by the time I actually got on set, I had already developed a rapport with the producer, the DP, and the lead actress. That was enough to establish a set culture. And then the rest of the cast and crew was able to slide into that culture. It also greatly helped that pretty much everyone there were full time industry professionals who were very excited and committed to this little passion project.

What initiated your choice of a script rewrite during post? How much distance is there between the initial narrative and the completed film?

Pretty much every project needs to go through iterations. I wrote the script pretty close to the shooting dates which meant I didn’t get to go through as many drafts as I typically prefer. Which in turn meant that the script wasn’t as refined as it could have been. You can’t always create in ideal situations though. In post, we realized there was SOMETHING there and that there was also a whole lot of NOTHINGS in the way.

A shot accidentally slipped into a scene it didn’t belong but it felt so perfect.

The shooting script was much more traditionally structured and linear, had a very large focus on her work life, and was not as interested in her guilt. During the edit, a shot accidentally slipped into a scene it didn’t belong but it felt so perfect. That became the catalyst for telling the narrative in a much more elliptical, dream-like manner that felt way closer to the character and how she might jump from thought to thought to thought. 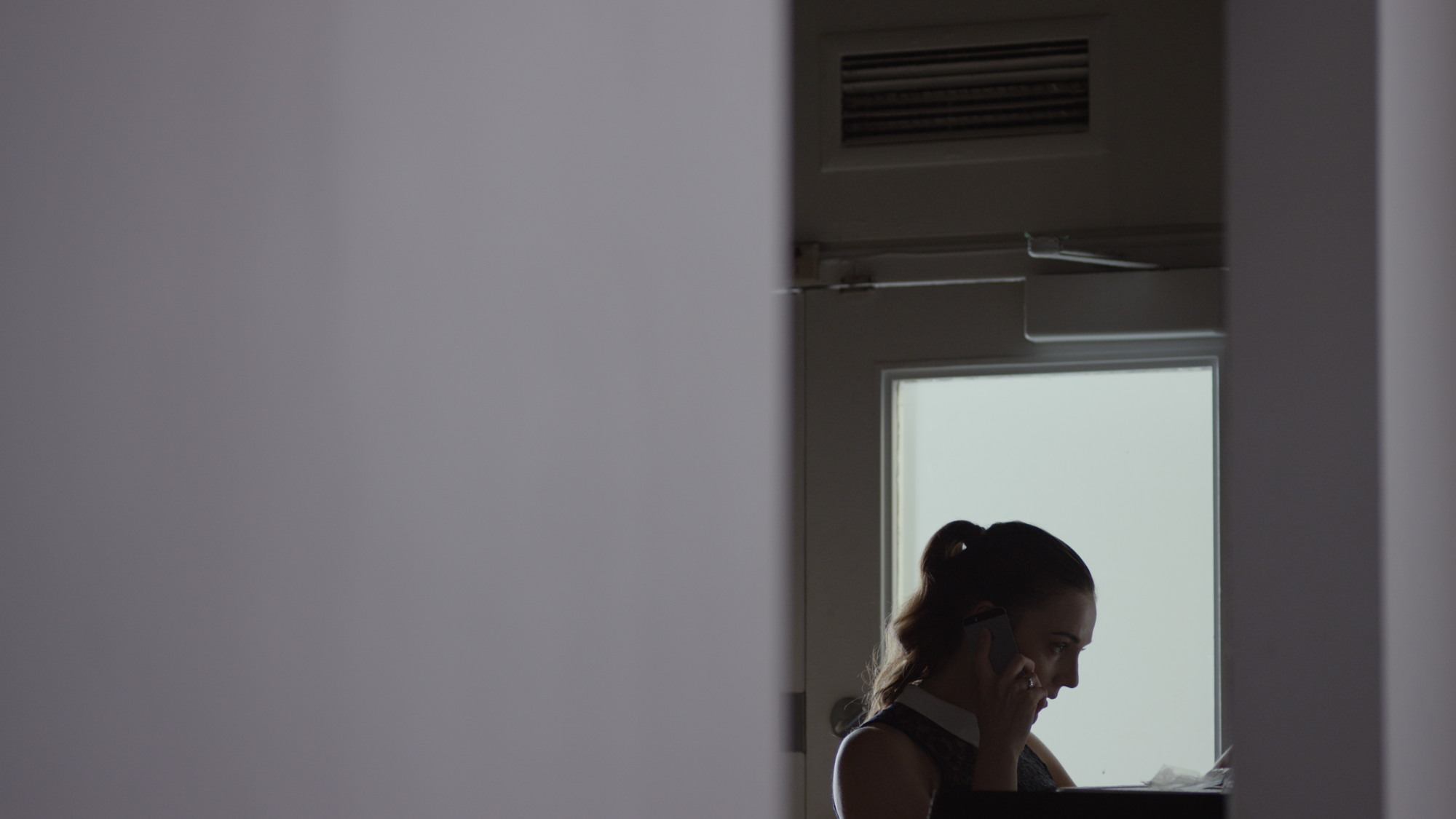 The edit became a nice way to show a character who is calm on the outside but a mess on the inside. In a feature, her work life would have been absolutely important to show. But in a short, it was just a distraction that muddied the main ideas. With those two big changes (the non-linear structure shift and the removal of her work life) the story really took shape. From there, it was just a matter of trusting the editing process and soliciting intelligent feedback.

Rival Shapes’ music makes the mournful isolation of Julia’s situation all the more palpable. How did they come to write the film’s score?

We did a music video for them earlier in the year and I really dug their music and asked them to score this. They were totally on board. I knew I wanted it to be scored from beginning to end in one long singular piece and that I wanted it to support Julia’s inner life. I gave them some reference tracks from Rob Simonsen, Johann Johannsson, and Trent Reznor and Atticus Ross. Their first pass at the score was like 98% there. We just had a couple timing changes because of some last minute picture edits. But they truly just got it and understood what the film needed. They’re very talented and empathic musicians and they really, really elevated the film. 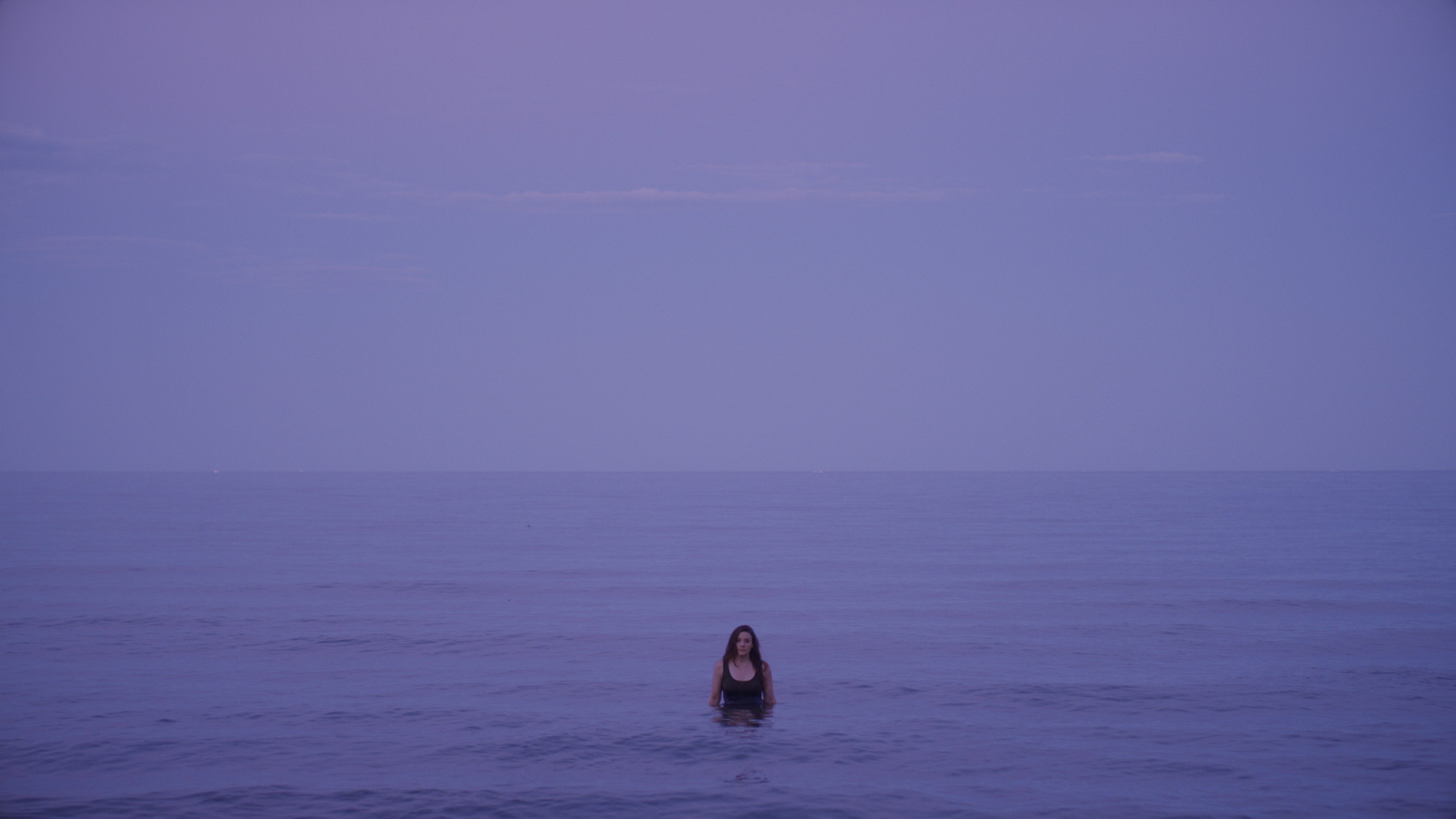 Isn’t there a new Crown Chimp short imminent? And is it still too early for me to tease any information about your coming TV series out of you?

Our short doc, Jay is on the circuit right now. We have a couple new shorts coming out in the next month or so. We’re in the process of fundraising for a project called Where The Sun Goes To Die which we have pretty big expectations for. We’re keeping busy and trying to make worthwhile stuff.

Not much more I can say about the series yet. We’re polishing off the script for season 1. Warner Brothers has been a pretty fantastic partner throughout this whole process. Hopefully, we’ll be allowed to announce some more information soon!

If anyone reading this digs the work, please sign up for our newsletter. We send it out only a few times a year but that’s where we do our first announcements and releases of new projects.