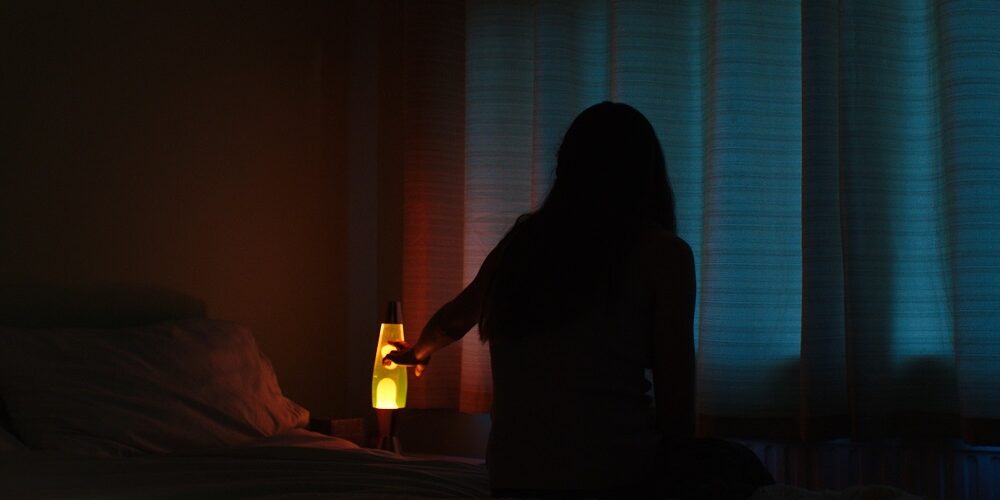 From as early as 1922, when F. W. Murnau presented his now legendary Nosferatu to audiences, the Vampire has become a staple of cinema scares and screams. In more recent years these blood sucking demons have also been used to serve up some teen romance and laughs, but filmmakers are now looking for new and inventive ways to tell the stories of these legendary monsters. One such filmmaker is Jimmy Dean, whose Film London commissioned short V sees British Realism mixed with genre filmmaking to tell the story of a lonely 15yr old vampire. The director joins us to discuss how he allowed his lead actress space to develop her character and why he feels a 4:3 aspect ratio gave his film an added sense of intimacy.

The story was written by Ellie Gocher, how did you come to be filming it and what attracted you to it?

Ellie wrote and produced the other two short films (Charity & Offside)  I’ve directed, so we were already looking to collaborate on another project. What always attracts me to Ellie’s writing is the central character — with V I thought Minnie was a complex character who jumped off the page, the kind of character audiences will emotionally engage with.

I also loved the concept, using vampire mythology to explore femininity and sexual abuse. Our past short films have all focused on the-coming-age experience of young female protagonists and this felt like a new and exciting way to continue to explore that theme.

The vampirism was always going to be a backdrop for exploring more important themes, such as adolescence and isolation.

V is a Vampire story, what made you want to add to an already well-trodden genre and what do you think your film adds to it?

To me it felt like a fresh take on the genre; firstly, that the vampire character was going to be a fast-talking British teenage girl, and then secondly, that she would express herself through the form of talking to camera. It seemed like a great way to explore a story and it was an angle I hadn’t seen before, which excited me.

The vampirism was always going to be a backdrop for exploring more important themes, such as adolescence and isolation, so I think the form of having her talk to camera allows the audience to connect with Minnie in a personal way, while also hiding and then highlighting her loneliness.

There’s something very British about V – it reminds me of a ‘kitchen-sink’ drama blended with a (somewhat Scandinavian feeling) genre piece, was this an intentional approach or something that happened organically?

We had a wide range of references for V, but it was always our intention to mix that sense of British realism with something more heightened. I don’t know if I’d specifically cite a Scandinavian influence, but we definitely saw the appeal of mixing that ‘kitchen-sink’ drama with aspects of horror and melodrama.

I was excited to do something different and evolve our visual language, so I’d say it was both an intentional approach from myself and the team, but a lot of the great visuals were already there in the script, so it was also born out of that.

Your film relies heavily on the performance of lead Synnøve Karlsen, who is onscreen for the entirety of the film, how did you work with her to hone her performance/character?

Working with actors, and collaborating to craft a performance, is my favourite part of making any film and working with Synnøve was fantastic. She’s an incredible actress who instantly got what we were going for and also connected to the writing, she felt passionately about telling the story, and for me, that’s such a huge part of working with someone.

In terms of how we worked together – we just talked about it a lot, exchanged ideas, opinions, got into the character’s head and then let it develop organically on set. That’s the best thing about working with someone as talented as Synnøve, all I had to do was just set up the space for her to work in and she has the ability and intuition to deliver everything I wanted and more.

It’s so great when you can work in a way where actors have the freedom to try different things and they often surprise you with something amazing you hadn’t thought of. So yeah, it was just a really productive collaboration where we worked closely until we hit the right notes.

V is also a great looking film, what can you tell us about how you approached the aesthetic and why did you choose the unusual frame rate?

Thanks for saying that, I’m so pleased with how the film looks, which is thanks to our amazing Cinematographer Anna MacDonald, Production Designer Greg Bradlaugh and their teams. They worked so hard, on a very small budget, and we had to be resourceful with our equipment and with dressing sets.

As I mentioned, with the visual style, we were always looking to mix a sense of British Realism with a more heightened aesthetic — we wanted the film to feel cinematic and we drew influence from a number of sources, that all informed the visual language we developed. Again, it just seemed to develop organically when we started collating references (which ranged from Andrea Arnold to Fassbinder) and that provided a springboard for our team to collaborate on developing and finding our style.

4:3 allows for us to perfectly frame Minnie and make the film as intimate as possible.

I was keen to shoot the film in academy ratio because, as we developed the film, it just seemed like the best way to tell the story. The film’s all about one character — and 4:3 allows for us to perfectly frame Minnie and make the film as intimate as possible. It always seemed to me there’d be so much unnecessary space in the frame if we shot it any other way, so the aspect ratio helped make it all about her.

Anna and I got really excited about shooting it this way and I’m so pleased with her work and how it came out. I think there’s something about 4:3 which allows for amazing close-ups, like if you think back to Powell & Pressburger, there’s something so magical about their framing in something like A Matter of Life and Death, or in Ozu’s work, and that was definitely on my mind as we worked on developing the relationship between Minnie and the audience.

Your short was commissioned by Film London, what did having their support mean for the film?

Film London were fantastic throughout. Creatively, they helped us develop the project, offered insightful script notes and helped us find our best edit. Practically, it meant that they gave us part of our funding towards V and allowed us to premiere V at the London Film Festival, which was a dream come true for us.

Ellie and I are starting the long process of developing a feature, which we’re both really excited about. I’m also always on the lookout to develop new projects, I just want to keep having the opportunity to make films and tell stories.