When his mother’s battle with the debilitating effects of depression take a turn for the worse, a nine year old boy attempts to cure her by building a time machine and learns a few life lessons along the way. Making it’s online premiere on Directors Notes today, we speak to Seven Things I’ve Learned About Time Travel Director Jonathan Herzberg about the ways in which his personal history elevated this child’s sci-fi romp from a catchy title into a deeper contemplation on the effects of mental health issues on family life.

How did a the concept of a child’s DIY time travel machine develop into this reflective sci-fi family drama?

Seven Things I’ve Learned About Time Travel started out as just a title that I came up with when looking for ideas. I scribbled it in a notebook and forgot about it. Then two years later I came upon it again and suddenly realised that with a kid as the protagonist it could really work. I immediately knew a few of the things he would tell us he’d learned (like the fact that time travel doesn’t at all look like it does in movies) but it took quite a while to figure out what the story was really about, which for me is really important, especially when writing sci-fi.

First I thought it might be about imagination and about how we make stuff up to have an audience, because that was where I was at as a filmmaker. But then I realised it was really about the moment in life you learn there are certain things you can’t control no matter how hard you try, something I’ve experienced firsthand when my mother was bipolar (during my teens). You try to influence the situation, but you really can’t. This is also why the story is circular, because even if you know this, you’re still bound to make the same mistake again and again. So then I had the story and the theme, or central idea, so I could start development.

I felt the time machine should answer a subconscious desire more than a conscious problem.

Two things really complicated the development. First, the technicalities of time travel are actually quite complicated. I had to decide whether Markus could change things in the past or not, and what the consequences of that would be. I tried many versions where he changed things and they remained different, but his mother would still be depressed, but these all felt off in a way, also because I was struggling with the question to what extent an eight year old actually knows what is going on around him. So I felt the time machine should answer a subconscious desire more than a conscious problem.

Finally, only a few weeks before shooting I figured out how to use the time machine in a more metaphorical way, where it works like our mind: when we travel back in time we can wonder what would’ve been different if we would have made different choices, but the present remains as it is, where when we think about the future we can imagine many different futures and not exclude others.

The second thing that was difficult in development, and throughout the production and post-production, was to find the right tone. I didn’t want the movie to be a depressing affair, but Markus surroundings needed to be depressing for his unconscious desire to work. So this was a balancing act mostly, where I tried to keep both sides in check. I once read somewhere that “tragedy is optimism in the face of despair” which is what I think makes the story work. In that sense it was also really important that at the end, when he finds out even a time machine can’t solve his problem, he doesn’t become sad or depressed, but moves on to his next project, much like I did by the way, and still do (always keep moving forward). 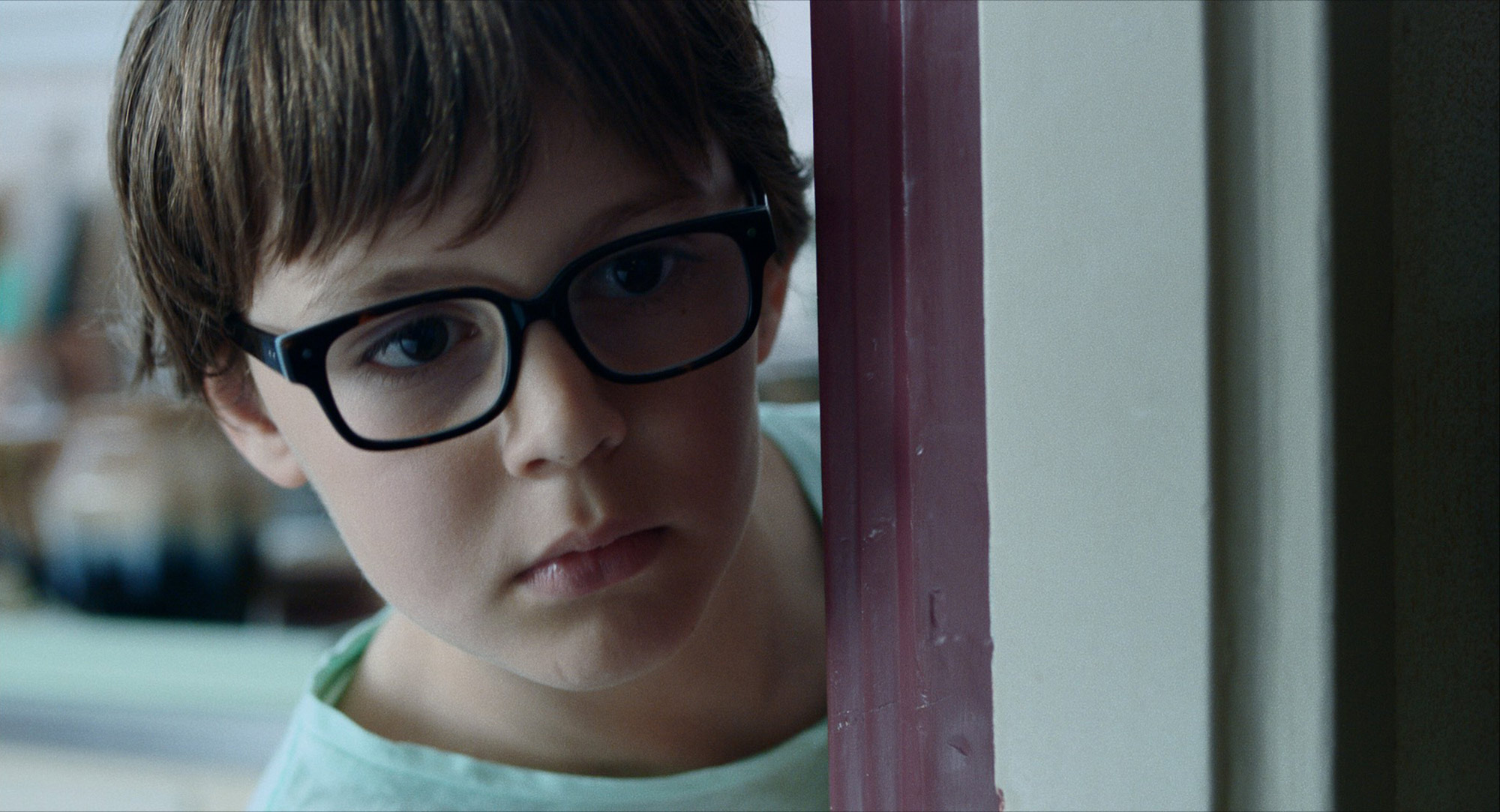 The entire short rests on your young lead Koen Van Veen, how did you identify that he was the correct actor for the role?

We found Koen in a thorough casting session where we saw about 25 kids, both boys and girls as I could also envision a girl in the role, screen presence and acting ability were more important. I believe that when working with children it’s very important to let the camera and the editing do the work. Meaning it’s not necessary for the actor to think or act the emotion or situation, the audience will create this if you choose the right coverage, blocking and edit. Therefore we were mostly looking for someone with an interesting expression when just looking, and a pleasant energy and ability to take simple direction. I had already chosen another, slightly older boy, but wanted to see him come in one more time. Because we had time we booked another kid (Koen), who then blew me away with his combination of optimism and energy on the one hand and his slightly sad look on the other.

I was a bit worried about working with this young an actor, but it turned out Koen was a better actor than many of the adults I’ve worked with. Especially the long take, where we use a double, was much easier than I had anticipated because he took direction really well. And he’s a very nice kid at that.

How did the rest of the shoot progress?

The actual shoot was quite a breeze actually. We had three days and were lucky enough to be funded by the Dutch public broadcasting company (NTR), which has a great program where every year they finance ten short films, so we could do everything necessary and even get paid a little. We shot on an Arri Amira with Cooke Panchro lenses in an abandoned house where we had full control over the art direction. This allowed us to work with a very specific color scheme that we borrowed from Antonioni – I hope you noticed that you hardly noticed this, but I think it works really well to convey the mood.

I love the hodgepodge nature of his homemade time machine, what influenced the production design of that?

First of all it is important to note that I was very keen on treating the time travel as something that really happens in the world of the story. Although the story is open to being read as a fantasy, his imagination of escape, I wanted to treat it like it was real. Apart from not using a ‘it was all just a fantasy’ reveal in the story, this had consequences for other choices.

Except for the splitscreen in the final scene all of the special effects are practical to make them as ‘real’ as possible. A similar thing goes for the time machine itself. It was very important to me that it really ‘worked’, with lights and power buttons and even sound. Together with the art director and our prop artist we designed a machine that consisted of old objects that you can find in an attic or storage: old VCR’s and amplifiers, a toaster and a helmet.

If you look closely you’ll notice all elements are analog, nothing needs a computer. This is to reflect the way in which an eight year old would envision this, somewhere in between his imagination and something that might actually work. I remember a book I used to read as a child in which a group of children build an airplane from household appliances when their parents are off for the weekend, and actually succeed in flying it – it had to be something like that. I think we succeeded really well in this.

Did the temporal jumps of the story complicate the edit at all?

I’m used to spending a lot of time in the edit fixing problems that we hadn’t foreseen, but in this case editing was quite easy as well. Only one short scene that I’d shot as a back up in case the mother’s depression wasn’t clear enough was left out, and the rest pretty much worked right away.

What’s interesting to mention was that in the shot where he’s standing outside and looks at his mother before the depression started, he gives her a drawing he’s made. When we shot this it was just an action that fit the frame, but in the edit I realised it’s deeper significance: he goes back to a moment where his mother appreciated his creativity. It’s speculative, but maybe this tells the story of why I became a filmmaker, or at least an explanation for why I long for an audience to verify my existence.

The technicalities of time travel are actually quite complicated.

The film makes it online premiere today following a festival run, how was that experience?

I expected this film to be able to do quite well in festivals, and although it has played in a handful, the reception was underwhelming to say the least. Maybe our festival strategy could have been better, or maybe it’s not easy to place the film in a specific category. Either way I’m really happy it can maybe get a second chance at an audience through its online release.

I’d also like to say that anybody who has a small festival in their backyard is welcome to show it, as basically all I want is for as many people as possible to see it.

The Seven Things I’ve Learned About… title sounds like the beginning of an ongoing series of shorts, are you planning to pull more lessons from this world?

It’s funny you say it sounds like this could be a series, I’ve never really looked at it that way, but now you mention it it makes sense. However, I’ve sort of moved on to next things, and must say I think I’ve said everything about this particular world and situation that I had to say, so I don’t see myself revisiting it soon.

Since finishing this short I’ve made two more shorts: Final Review about an ad exec who when he dies finds out there’s no heaven or hell, but only a final performance review and he scored a disappointing 43% on his life, which is currently being submitted to festivals, and Elegy for #23 which is more of an Lynchian thriller and is currently in postproduction.

Besides these shorts I’m working on several other projects, mostly feature length, most in some way combining fantastic elements with human psychology. And I also do a lot of teaching.