It’s human nature to categorise people into pre-defined boxes but more often than not, we find that these superficial presumptions fall way short of the complexities and contradictions which comprise our true natures, not to mention our capabilities. Recognising an embodiment of this dichotomy in the subject of their Adidas spec ad, Gaul Porat and Skyler Fulton join us with More Than the Sum and discuss how stepping out of their respective comfort zones expanded both the ambition and depth of this passion project.

How did the two of you find yourselves sharing directorial duties on this Adidas spec spot?

Gaul Porat: Making More Than The Sum was something accidental that I fell into directing. I found myself in New Orleans for a job and wanted to hang out for a few days longer for fun. Me and a frequent director I shoot for stayed with Edward Spots, who at the time I had just briefly met in New York 4 years prior. I’m not used to people I barely know offering to host me, but I went along with it and found out that Southern hospitality is a real thing and quite refreshing after living in New York for just three years. In that time, I got to know Edward better and thought it would be fun to create a sports ad with him working out and dancing because he’s good at both.

I came back to New York with some dope looking footage and Edward looked awesome – the dance, the workouts, everything looked real fine. But after putting an edit together, it was clear that this was just another bunch of cool shots strung together that ended up looking like a sizzle without any meat to it. No story, no message. That felt weird because after getting to know Edward, I knew that he had a lot of story and a LOT more going on than meets the eye. His upbringing, his struggles as a dancer who is pursuing a path that is not ‘meant’ for his body type. His cultural upbringing in a white family as well as with an African American single mom, never knowing who his father is. He would go to boarding school for dance up in New England while retaining his roots with his family in the Ninth Ward… he had an incredible mix of things that usually don’t mix together and while those were difficult things to deal with, I saw that it was not in spite, but because of those challenges that he was such an interesting and inspiring person to me personally.

Skyler Fulton: Gaul and I are actually each other’s oldest friends. We met in 4th grade when he moved to my street in Newton, MA. Back then, we used to make short films on his VHS camcorder (which I hope never see the light of day). Fast forward 17 years and we’re collaborators once again.

Gaul invited me to be a part of this project after he had already done the test shoot with Edward in New Orleans. At the time, I had I just left my agency job to pursue freelance writing and directing. We were getting lunch to celebrate his birthday and ended up speaking only about the project. I shared some ideas on how to craft the narrative and he was like, “Cool, why don’t you come direct this with me?”

Co-direction is something that can either make or break a piece.

GP: Having Skyler join me to direct was the most unexpected blessing. He’s one of my oldest friends and I am very familiar with his comedy work. But when he started bringing so many good ideas about unfolding a story, I saw that in some ways he understood Edward’s story better than I did. Co-direction is something that can either make or break a piece. In the case of More Than The Sum, our strengths complemented each other’s weakness. Where I lack in subtlety of storytelling, Skyler excels at fine tuning the dial and how slowly to peel back the layers. Working with your best friend can be complicated, but the upside is we could get into the biggest disagreement about where to take it and yet at the end of the day we’d still be sitting down to grab a drink, talk about something completely unrelated and move forward.

With the test shoot in mind as a learning experience how did you then approach the full shoot?

SF: There were probably 5 days in between the moment I committed to the project and the first day of shooting. We shot basically everything in 3 days, with the exception of the dance sequence, which ended up coming from a reshoot months later. As for crew, we only had an additional producer/AC and sound recordist with us. The whole shoot was very run-and-gun, but everyone was passionate about the vision and was cool with working super long days.

GP: Despite being physically excruciating, production for me was the most fun part of this. It was hot, it was humid and at times torrential rains, but I’m used to shooting and operating myself a lot – I own an Alexa Mini and rented a Cooke 32mm S4i lens – so it was pretty great to have a camera in my hand wherever we went and be able to pop out of a car and grab certain shots.

I had an amazing AC who is a close friend now, Casey Shaw. We met on a flight randomly, but he’s much more than an AC. He DPs sometimes as well, which really helped him understand the overall vision and style for what we were trying to create. He had the same passion for this project as we did which is one of the hardest things to muster up when working on set. While he was my AC, we unfortunately couldn’t afford much equipment, so I pulled mostly off the barrel or at times off of a small manual follow focus. Quite difficult when shooting so much movement and in low-light… but I guess it worked in the end!

SF: Working with Gaul, I had the luxury of knowing everything was going to look incredible, which allowed me to focus more closely on the narrative. The most important aspect of the piece to me was that it felt authentic and not manipulative. Specifically, I wanted to make sure that the first act of the story did nothing to overtly mislead the viewer. If upon first glance the viewer thinks Edward is a particular type of athlete, it can’t be because we used visuals of him training for these particular sports. The idea was for the viewer to fill in the gaps on their own. That, unfortunately, meant convincing Gaul to scrap a lot of shots from the test shoot. It was also crucial that the reveal unfolded in a subtle way. It’s naturally pretty shocking, so if anything, I wanted to pair it back and ease into it. I didn’t want it to feel like, “A-ha! Got ya!”

The most important aspect of the piece to me was that it felt authentic and not manipulative.

To what extent did the structuring of Edward’s story largely take place during the edit?

GP: It evolved a lot from the start and as a first time director on this, I really learned so much. The magic when watching an edit for the umpteenth time you somehow find that you’ve lost yourself in the story and forgot about all the background, it’s a great feeling. But I also felt the pains of those ‘killing your darlings’ moments where you really feel like you’re cutting an arm off but later realize it was for the best.

The final cut and story really takes so much out of what we could have told about Edward. With our Editor, Colin Hingel, we went back and forth about whether to make this 12 to 8, to 5, to 2 and then back up to 3 minutes. We wanted to make something that people could easily watch the whole of because it’s very important that they stay with us long enough to get the reveal in the middle. We didn’t want to lose their interest before that because we do set it up like many doc-style branded spots about athletes. We wanted to have enough time to establish who he is, where he is and the basic context, but not too long that we lose interest before revealing that he is also a ballet dancer. This is where having Colin as our editor made a huge difference. He has a keen eye for story and cared so much about this piece as well. The final piece really feels like a culmination of an evolutionary process because we really had the luxury of time on this one to play and try lots of different options.

SF: We left New Orleans very excited about what we had, but the brunt of the work came in post. We really experimented with just about everything. This piece took countless different forms before we arrived at the final cut. I can’t overstate how important our Editor Colin Hingel was to the project. Not just for experimenting and finding things that Gaul and I hadn’t even considered, but for putting up with incessant rounds of notes. 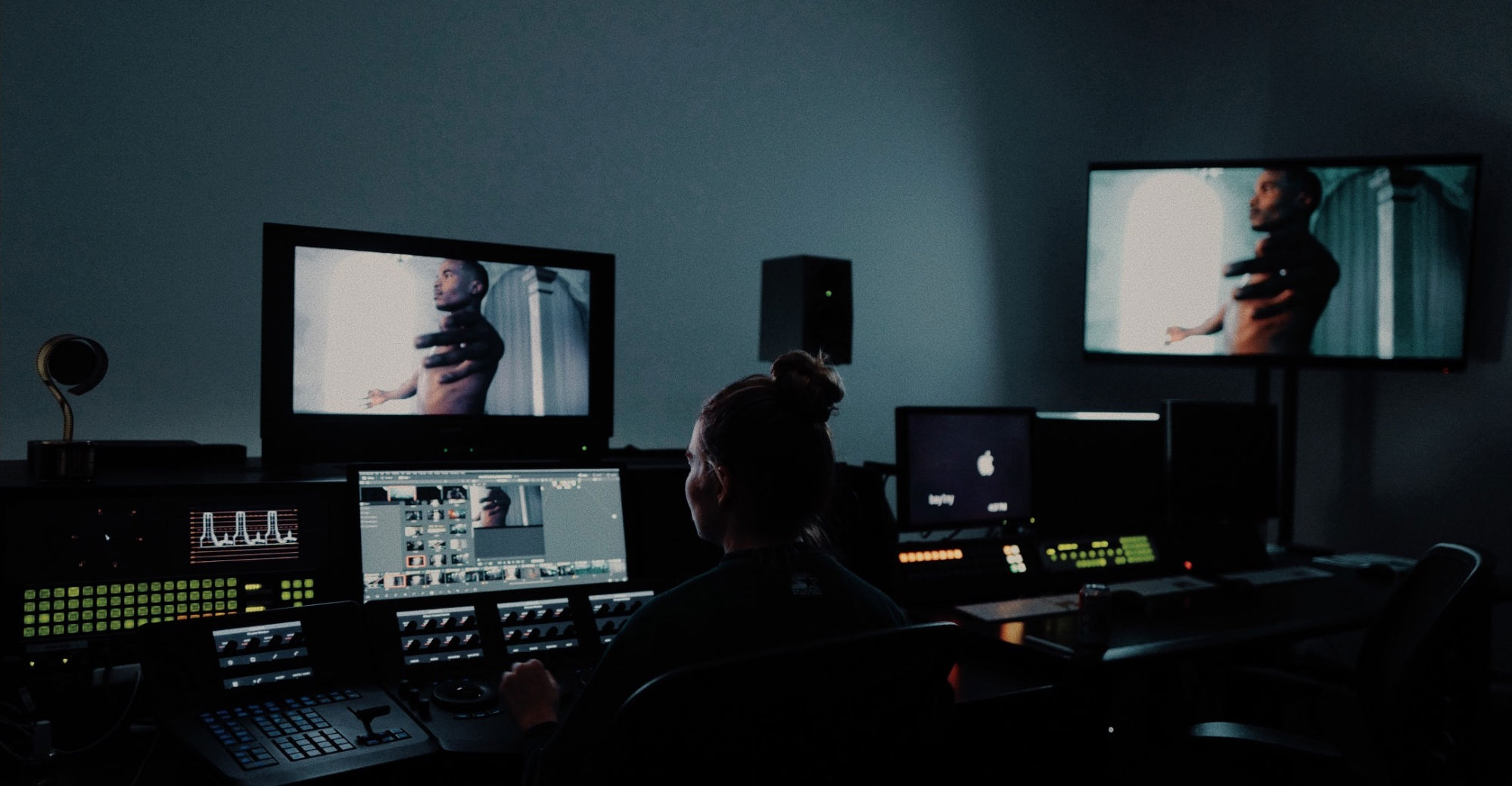 GP: Also, this piece would not look the way it does without the talents of my friend Kath Raisch at Company3. More than just a good colorist, Kath had that same passion for the project that I had and pulled a few strings to fit us into her extremely busy schedule at one of the best post houses in the industry. Her positive vibe and genuinely caring attitude towards the piece went a long way in the final stages. She brought all the disparate looking scenes together that, due to the nature of our run-and-gun shooting style, were just all over the place in terms of color temp, exposure levels and all that, and she made it all fit and flow together seamlessly. She made things look and feel beautiful while still grounded in a deeply real place.

Is there anything in particular you took away from the experience of making More Than The Sum or would like audiences to consider after watching it?

SF: In some ways, I connect to this message on a personal level. For me, I had felt pinned as a comedy director. With the exception of a few documentary shorts and branded content, scripted comedy fills my portfolio. It felt good to break out of that box, especially since so many of my young director peers are told all the time that we can create either comedy or drama.

GP: Ultimately, this is just a 3-minute little branded spec spot, but I hope that it stands out as something with some more substance and a message that everyone can relate to. I think that everyone has at some point felt that they are more than the sum of their parts – that they do not fit neatly and permanently into categories of race, culture, sexuality, gender, and that there is always more to us than what others want to imprint onto us. And I’m really glad to share it with Directors Notes and whoever takes the time to watch.