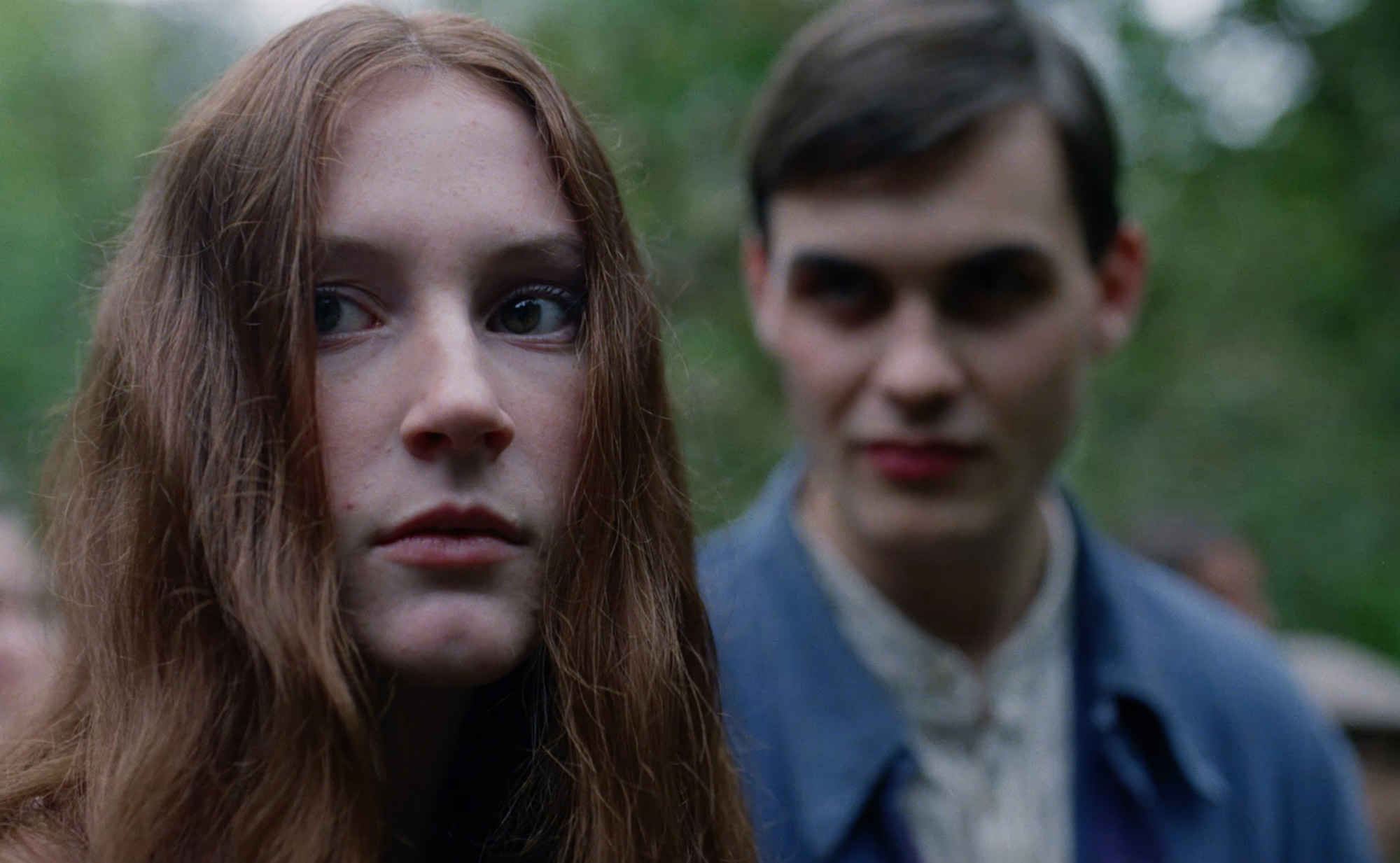 In The Sermon, Dean Puckett taps into what takes a horror film from being an average cinematic affair and to the next level. He uses, like many a great horror filmmaker, imagery and narrative as allegory for the present times we live in whilst enticing with an unsettling folklore aesthetic. Making its online debut this Halloween as a Vimeo Staff Pick, we spoke to Dean about why folk-horror was the perfect staging ground for this story of a non-progressive community led by a bigoted man.

Where did the idea for The Sermon come from?

For years I had this seed of an idea that one of these anti-LGBT+ Westborough baptist church-type hate preachers must have a gay child, statistically right? So how must that feel to grow up in that hateful environment and what drama and tension would that cause?

That idea had been floating around in my head and when Brexit happened, and Donald Trump happened, it suddenly felt like a large percentage of the population of their respective countries were looking backward to a time when the UK and the US were ‘great’. But these ‘great times’ were not so brilliant if you weren’t a heterosexual white male. Effective horror taps into the social anxiety and fear of the day, and so the fear of the crowd and a genuine concern about a swing towards fascism in the west suddenly didn’t seem so far-fetched anymore and was what I was interested in tapping into metaphorically.

It occurred to me that the genre of folk-horror has been dealing with these themes and social anxieties since the late sixties. Films such as The Wickerman, The Blood On Satan’s Claw and The Witchfinder General. These British films from the late sixties and early seventies inspired me and have become known as the ‘Unholy Trinity’ and are characterized, in general, by isolated communities that have created their own societal rules often dominated by a strong male figure and ending with an explosive act of violence or a ‘Happening’.

I decided to set my story in a folk-horror world, setting it in an isolated British community that had created its own societal rules and was crumbling from within due to the arrogance and cruelty of the male characters. Swapping the paganism which was being persecuted in films like The Witchfinder General for homosexuality and an old testament fear of abominations. Set in a kind of parallel reality almost like a dream that could be in the past or perhaps, if we are not careful, our future.

Nothing is there just because it would look cool, everything has a specific purpose.

I was also inspired by silent cinema and the thought that a hate preacher’s sermon could act as a through-line and juxtaposition with the drama playing out mostly dialogue-free, through gestures, looks, and imagery. I like to think you could watch The Sermon with the sound off and still understand exactly what is going on. However, despite all of these underlying themes the film can be enjoyed as a simple love story/revenge thriller and I think people will engage with the emotional core of the film which is Ella’s secret love and what she has to do to overcome oppression.

Could you talk about working with Ian Forbes to create the visuals for the film, what were your inspirations and aims for The Sermon’s aesthetic?

It was very important to me that we shoot on 35mm film as it has the texture and timelessness that I wanted. That presented a lot of challenges on our relatively small budget so I storyboarded every shot meticulously. What I love about working with Ian is that all of our discussions are about the intention of the script or the character or the story and then everything else comes from there.

There is a meaning behind every single shot in The Sermon, there is no scene in which two people are talking and we have a shot-reverse-shot, for example. It’s much more like silent cinema in that way, as I said before, so if the camera is behind The Pastor as he is talking to the crowd there is a reason for that which Ian and I have discussed. Nothing is there just because it would look cool, everything has a specific purpose and I think that’s important to us.

I tend to have the whole film mapped out in my head visually and what is exciting about finding a cinematographer that you are in tune with is that they can see it too but then make tweaks and changes to make it better. However, when we talk about the aesthetic it’s really important to say that it’s about how my Costume Designer Oliver Cronk, Production Designer Maisie Doherty and Ian all worked together and interpreted my ideas. It’s a collaboration.

Oliver is quite literally a genius, I gave him quite a blank canvas only specifying that I wanted the film to be set in a kind of nowhere-time not a specific time but perhaps an alternate reality. We also talked about The Nazi Youth and The Kindred of the Kibbo Kift and what he came up with was staggering to me. I remember walking outside on set to see everyone dressed and feeling a little bit scared looking at all the extras before we shot and thinking “we are on to something here”.

I don’t think it’s a coincidence that we are seeing a resurgence in films set in the past about isolated communities that are lead by foolish or bigoted men with proto-liberal protagonists trying to escape.

I’m really interested who or what ‘The Shadow’ represents for you? When it first appears it’s so unsettling.

The medieval/folklore setting for horror films has become popular as of late, with films such as The Witch, becoming particularly prominent at the box office. What do you think it is about that historical setting that holds relevance to today?

Carl Sagan said that you have to know the past to understand the present and all good genre filmmaking is saying something about today. The Texas Chainsaw Massacre was about the Vietnam war, Night of The Living Dead was about the Civil Rights movement and so on. I don’t think it’s a coincidence that we are seeing a resurgence in films set in the past about isolated communities that are lead by foolish or bigoted men with proto-liberal protagonists trying to escape or survive that situation.

Most creatives are liberal or progressive people because you sort-of have to be to have empathy for people to tell stories, so we are projecting our fears about today into the movies we are making. It’s also a space in our minds where strange things can happen, supernatural things that we have lost, a connection to the earth and soil which is both fascinating and somehow scary. This gives you a lot of creative freedom both thematically but also cinematically. 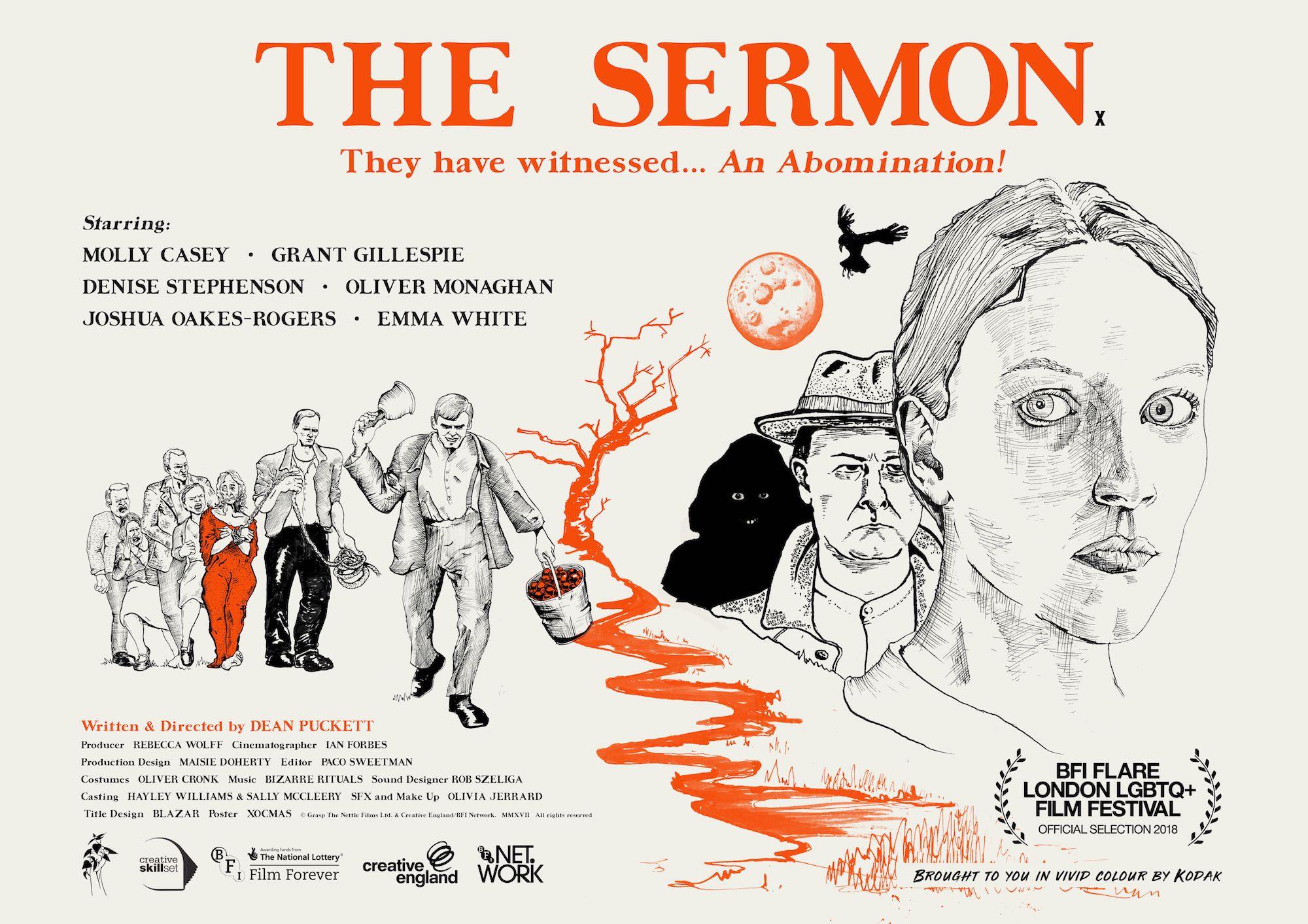 I’m currently developing a couple of feature films, one of which is a feature-length folk horror film that deals with similar themes and ideas to The Sermon. Another is a neo-realist revenge thriller set on in the English Riviera. I am also developing a Giallo-Pagan detective story for TV. Most recently I shot a Straight 8 short film [Satan’s Bite] for Kodak’s competition where you are only allowed to shoot one reel of super 8 with no editing. A lot of the crew from The Sermon where involved and we had a real blast making it. I also just directed a music video for Brainrays who co-created the soundtrack for The Sermon which will be out soon.