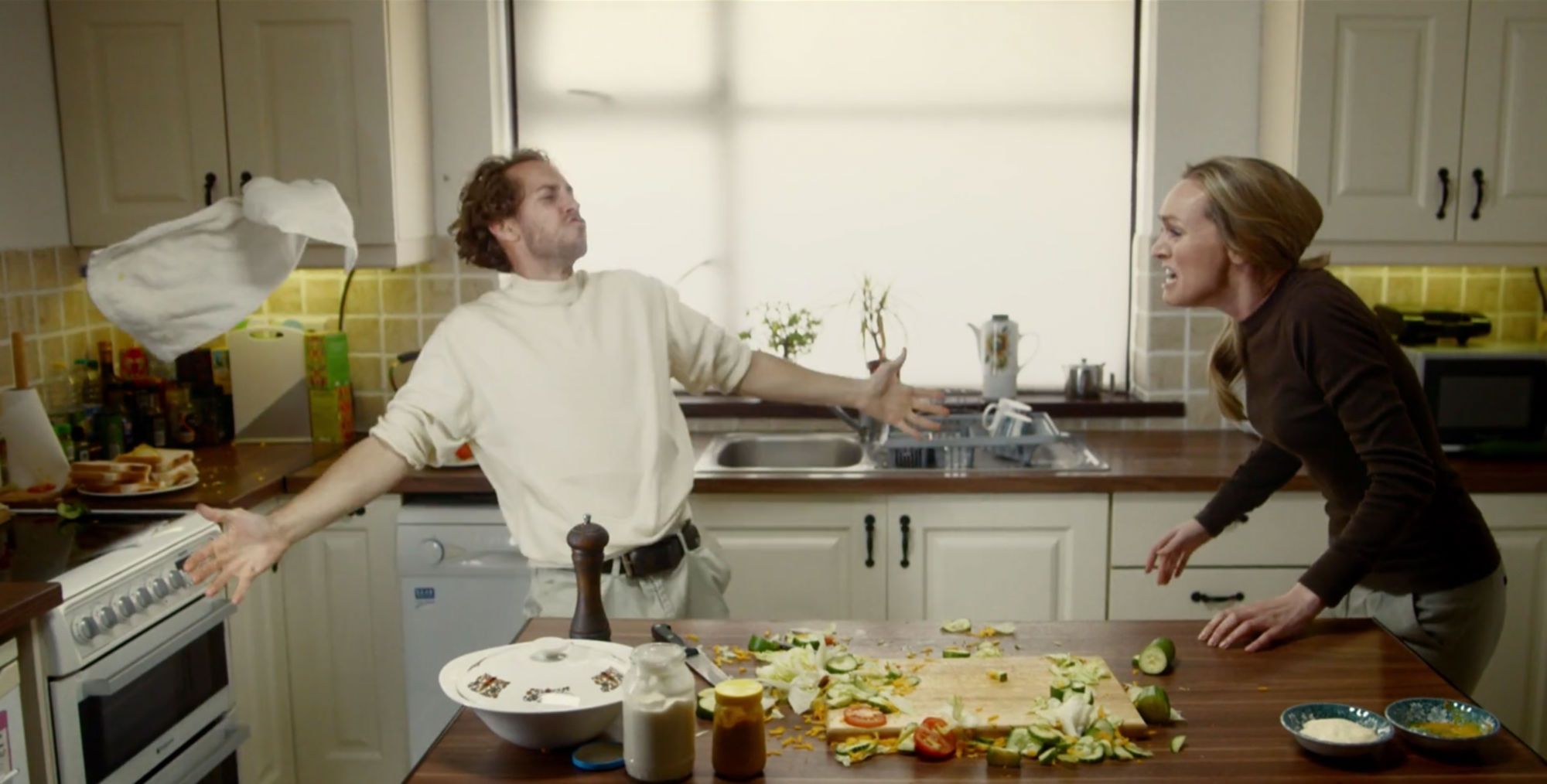 Billed as “A story about love, loss, pain and sandwiches”, Director Finn Keenan transmogrifies the glitchy aesthetics of many a music video into a life wrecking disease of maximum swag in Back & Forth for MK. Below Finn shares how a clever pitch idea quickly became a gravity defying production challenge he had to quickly figure out a solution to.

I was watching a music video one day that was basically a bunch of people dancing but really intensely edited. Looping and glitching editing, back and forth, etc. I just found it quite funny imagining they had a condition rather than being edited. When I heard the track Back and Forth all I could think of was a ludicrously happy man having this ‘condition’ but ground it in a really serious narrative. The more ridiculous his condition gets the more heavy and depressing the narrative gets.

I pitched the idea having no idea how I’d actually do it if it got picked. So when it did get picked it was a mix of excitement and utter panic! I spent a few days shooting very embarrassing tests of me dancing around the kitchen like an idiot which will never see the light of day. And then a few days shooting tests in Ireland before the shoot.

I pitched the idea having no idea how I’d actually do it if it got picked.

For all the floaty stuff we did as much in camera as possible. A lot of jumping off step ladders on crash mats, and bouncing on trampolines, and then removing them in post. And for the wider shots where there was a lot of crossover with the characters, we worked with the lovely folk at MPC on rotoscoping and repositioning characters.

The edit itself wasn’t as tough as I’d expected. We got so lucky with the performances from the actors and DoP Eoin Mcloughlin did such a good job shooting it, that the narrative aspect of the edit came together in a couple of days. Then I spent a few days having fun with the glitchy dance editing.

We shot on the Red Dragon with Arri Master Primes over the course of two days in two different locations in Dublin. One day all in the family house and then one day in a location that had to work as the doctor’s office, the waiting room, the funeral scene, and his work office which wasn’t an easy find but eventually we found this amazing old university called All Hallows who basically gave us the run of the place for the day. There were a ridiculous amount of setups on that second day but between the amazing crew and the help of a lot of friends we managed to get it all done, so big thanks to Riff Raff and everyone who helped out on it!

This film is one of the many great projects shared with the Directors Notes Programmers through our submissions process. If you’d like to join them submit your film.