Sometimes there comes a point when the mounting struggles of life can threaten to overwhelm us completely but what if instead of fighting an unwinnable war, we instead chose to discard the troubles of the past to emerge renewed and ready to embrace the possibilities of the future? Connecting with the emotional resonance of Benjamin Francis Leftwich’s track, Gratitude from Director Harvey Pearson is an intimate one-shot music video which follows the turmoil, acceptance and renewal of a man as he comes to terms with his inner demons. We spoke to Harvey about the powerful immediacy provided by real time narratives and why 35mm was the clear format choice for this story about making peace with your past and moving forward.

Where did the idea for this intense emotional journey come from?

I have been a fan of Benjamin Francis Leftwich’s work for a long time, a good few years actually and we’d been in contact for a while speaking of working together. This idea, or the spark of this idea, was in my head for a while and after Ben and I had a conversation around the space of this track, I went away and developed it into something fully formed.

Listening to the track, there is a sense of change or a realisation. For me it’s both a sad and a happy song; looking back over your past and realising something needed a change, knowing and embracing that change. It hit home for me, and I think feeling this through the lyrics and also the beautiful progression in the track sonically, allowed this idea to become what it is.

How have people been interpreting the actions in the video?

There’s been a lot of different readings into the narrative and questions as to what it means, and that’s exactly what we wanted to convey with this film – for everyone to connect with their own feelings and take something different from it. For me though, it’s a positive one. I see letting go of the darkness, a turning point, making peace with your past and moving forward. The two key moments of the video involve the burning of all his possessions and the slow submersion in the lake. In my mind, his clothes and his possessions, such as his watch represent his past time and regrets, burning them and watching them disintegrate. The lake then acts as a symbolic cleanse, washing everything away and starting again.

I really wanted the audience to experience everything as the character does.

Why did you decide to go the one-shot route for this and what do you feel the real time element brings to the concept?

The concept of one shot videos has always intrigued me technically, but also how this affects a narrative of a film. I decided to shoot this in one continuous take because I really wanted the audience to experience everything as the character does. To literally be dropped into this moment with them, joining him at this turning point and almost as a fly-on-the-wall, follow him through each thought and movement.

I think that this also furthers what I mentioned earlier about viewers reading their own interpretation of it. Being dropped into a situation, you are only given 3 minutes of a moment for context, I found this to be very intriguing especially for telling this particular story. On a more technical side, there were, of course, a lot of limitations for approaching this video in this way, from the fire, to the weather, the freezing cold lake. There were a lot of factors that could go wrong however, I had a passionate and solid team to help pull this off.

Could you take us through the technicalities of pulling this off and the gear you used to achieve that?

We shot this on DoP Hunter Daly’s own 4-perf Arriflex 435 because we were shooting on 35mm and with the length of the take, it restricted us to 1 take per roll. We only had 5 rolls, so we approached this with caution. Throughout the day we set up the scene, with the placement of the car to the fire and the lake, etc. I spent time with Connor Newall, our actor, getting him into the space where the character would be in this moment, giving him brief pointers and steps of the narrative. We didn’t want this to feel choreographed, so we did a couple of run throughs to get the overall movement of the action but no specifics. I wanted to get the most natural and intimate performance from Connor and also from the movement of the camera.

Jake Whitehouse, our Steadicam-op, operated the camera on this and the main direction that Hunter and I gave to him was to not worry about being 100% precise, as this would feel fake. By keeping it flowing and reacting to Connor’s movement, moving in and around with him, whilst keeping most of our focus on his face, created this movement that feels real – really experiencing everything with him step-by-step and feeling the emotion through his face.

We got it in one take.

After doing a couple run throughs without rolling the camera, we went for a take when the light started to drop, (we wanted to get this ideally, on the edge of darkness). This first take was the take we used. We got it in one take. All of the factors that I mentioned earlier, all just added to the realness of the take and how that affected the feel of the narrative. And again I have to thank my amazing team for pulling this off. We did one more take, just to have a back-up in the can, but the first take is the one you see.

The reveal of the lake at the end is pretty magnificent, what characteristics drew you to that location?

I went back and forth with what sort of location I thought would work best for this narrative. The key thing I think was the type of water he would end up in. Each type of body of water has its own connotations and I came to the conclusion that a secluded lake would be best for this. I had spent some time up in Scotland this year exploring the highlands and around Loch Lomond. I knew that there would be something around there so that’s where we started.

My main thought was to keep it other-worldly and to make it feel like this character was truly alone. I have to thank my Producer Daisy Costello here, when we went to recce for locations, the location we used (Loch Doine) was the top of her list – she’s very familiar with this area. When we arrived, quite literally in the middle of nowhere, looking out across the lake and no sign of human life, I just instantly knew it was right.

As I mentioned earlier, there were so many factors that could affect the one-take shooting, one of those was the weather. With it being the Highlands, the weather can change so quickly. When we went to recce, it was warm and still feeling like summer – within the week, when we actually came to shoot, that had switched to heavy winds and rain, almost being thrown straight into winter.

At the time I think I was worried about how this would look in camera and the technicality of shooting. Again, I have to thank Connor and my amazing team for braving the freezing winds. There’s a moment where the wind hit the character’s shirt. This only added to this struggle with his own mind that you can see him dealing with, I think it feels quite claustrophobic, whilst also feeling quite beautiful. If the winds were as still when we recced, we definitely wouldn’t have had the same effect – so I have to thank the weather for that one.

It could seem a somewhat counterintuitive choice to shoot on film, especially as that limited you to 5 attempts. What was it about 35mm that made it the correct format for this story?

Earlier this year, I shot a trilogy of films for SG Lewis with Hunter and that’s where I fell in love with shooting on 16mm. Before that, I’d shot a lot of stills on film but never anything on motion picture film. At the time, I got in contact with Hunter as his work shooting on film had always stood out for me. For the SG Lewis trilogy, we decided to shoot on 16mm to achieve a gritty yet dreamy feel – which for that narrative, worked perfectly. For Gratitude, I knew it was always going to have to be on film, there is just something so intimate and real that you can’t recreate with digital.

Due to the nature of this idea, I knew I needed to work with someone I trusted. After working so closely in LA for the SG films, I knew that would be Hunter. His knowledge of shooting on film (and cinematography in general) is amazing, and something we’ve connected on creatively. We initially spoke about the different ways we could approach this, and after going back and forth about formats and lenses, we landed on shooting this 4-perf 35mm with Hawk-V Lite Anamorphics.

Narratively this film was a lot darker and more intimate than the SG Lewis trilogy, so we wanted to mirror that in the cinematography, therefore giving it a different look. The depth of field and richer tones of the larger negative brings you up close and personal in the more intimate moments with the character, and then when we open to the expanse of the vista, the anamorphic really gives the intense scale we needed. We also pushed the film 2 stops, to achieve a texture close to 16mm, keeping the grit that I loved from the SG Lewis trilogy, whilst still keeping the solid characteristic 35mm. 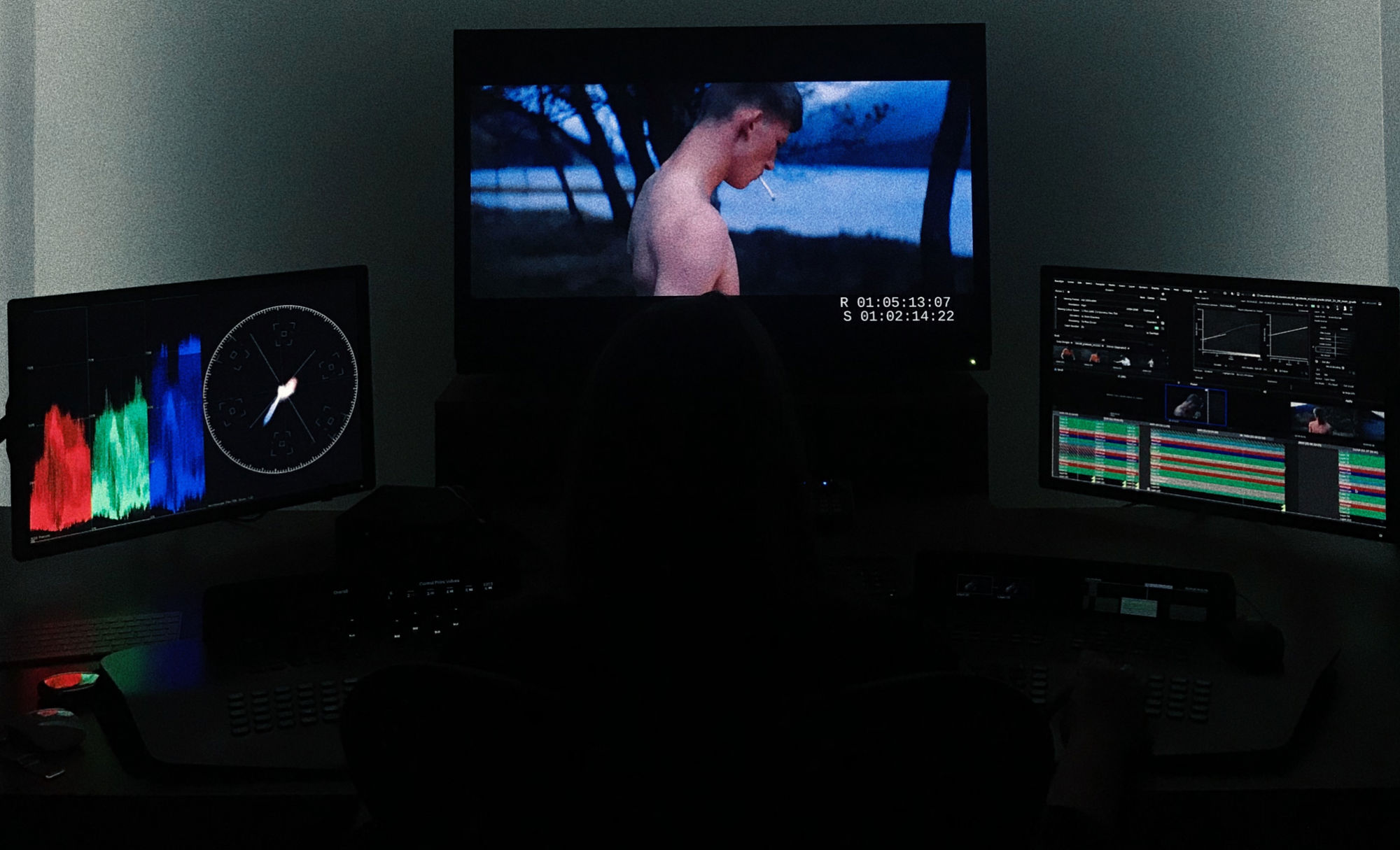 As it was a one-take, post didn’t take that long. We waited for the film to come back from Kodak and then aligned with the track and went to grade. We graded with Ruth Wardell at ETC, starting at 7 pm and we ended up finishing at about 4 am the next morning. It was a tricky grade as we had to take the different ’scenes’ within the one shot and separate them up. We got one look we were happy with across the whole film then tweaked individual moments accordingly.

The final part of the SG Lewis trilogy will be released in the new year and I’m working on a couple of exciting projects that I can’t wait to share.