A playful and unfortunately pertinent reminder that women are way more than the objects of desire the male of the species routinely reduces them to, Colin Read’s Skin Crawl flips the problematic dynamic between the sexes on its head by having South African singer/songwriter Alice Phoebe Lou treat the men in her monochrome world as literal objects for her use. Impressed with this deft calling out of misogyny and objectification, we invited Colin to share how he turned a lack of budget into an aesthetic and narrative device which strengthened rather than detracted from the music video’s concept.

I was originally sent over several of Alice Phoebe Lou’s songs from her new album Paper Castles but I connected with Skin Crawl the most. I’ve learned since that the song was written as a response to some very dark and scary moments that Alice experienced. But before I knew that, I just loved the lyrics — they have a powerful feminist message, while still being playful and fun. In the lyrics, Alice rejects misogyny and patriarchy and reminds us that women are more than just objects for men to use. So for the video’s concept, I inverted that dynamic and had Alice using men as objects, literally. Men’s bodies are arranged as furniture and appliances for Alice to use.

It was fun thinking up the different objects that the men could be. I would just sketch out ridiculous poses, to see what might be physically possible, and what would be funniest. Initially, I played with the idea of having some really outlandish “objects” — like a bubbling jacuzzi, which was really just a normal bathtub, with several men’s heads underwater blowing bubbles out of their mouths. In the end, some of the ideas had too many additional non-human components or seemed too complicated; I decided that whenever possible there should be no outside elements (except for when a body part is used as a receptacle to hold something). Other ideas got scrapped because they required too many people and our budget only allowed for ~12. So that discounted a lot of the wackier ideas. Also, some that were in the original treatment got cut as we moved toward production, and some new ideas got added at the last minute.

It was fun thinking up the different objects that the men could be.

To play up the visual gags, I wanted a bit of a retro vibe, with a lot of center framing, and some long, slow zooms. My DP Lucas Fiederling found this lens, a vintage Angenieux 17-102. It had some charming characteristics, but while testing it, we found that it had some significant vignetting toward its wider end. But we decided to embrace its flaws and let them further push the video toward that retro, nostalgic feel. Along the same lines, we shot everything either on sticks or on a doorway dolly; everything very solid, no modern handheld or Steadicam. 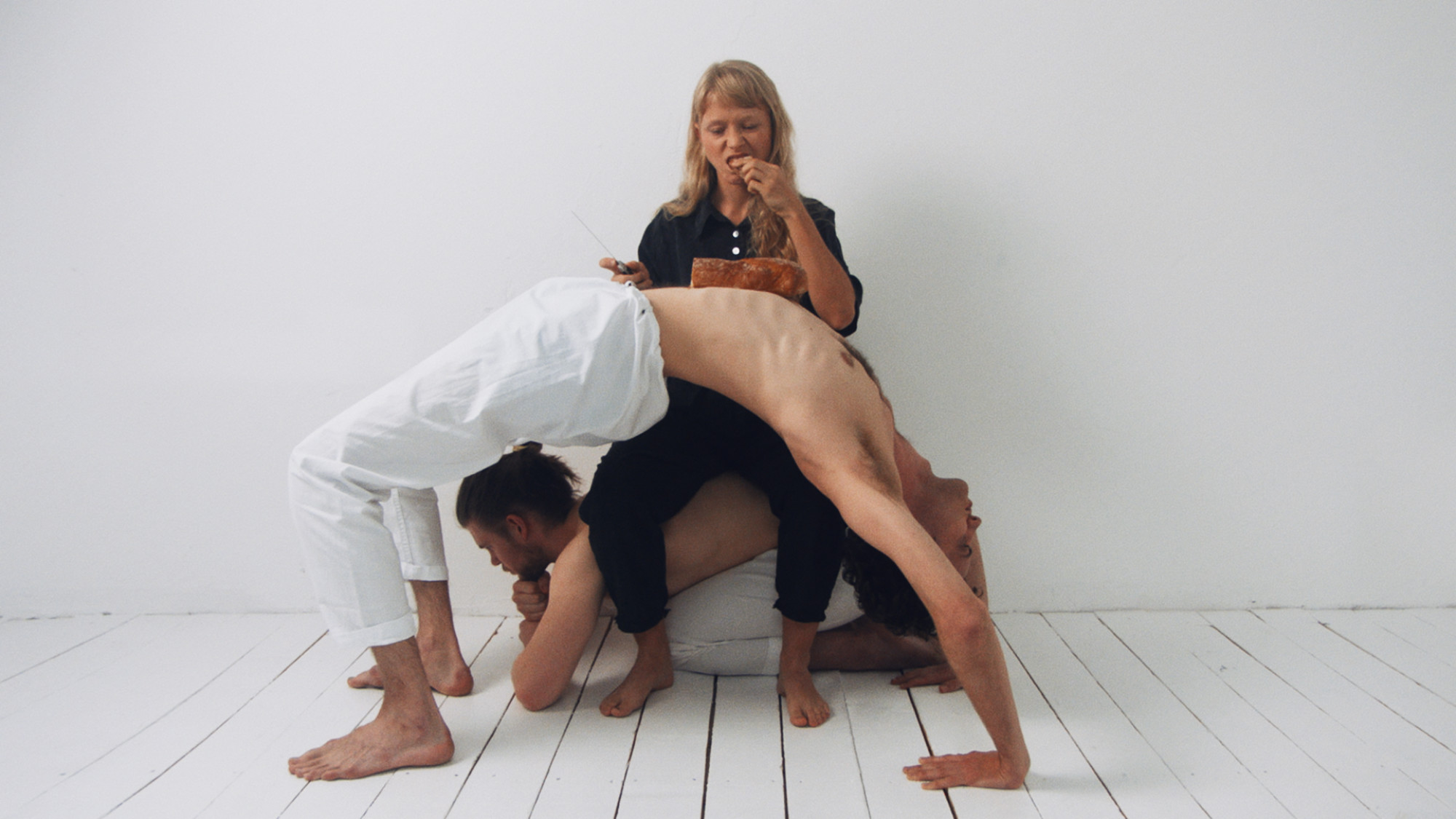 I wanted to keep the art direction very simple, sparse, even stark. I wanted to let the main color palette come from the men’s varying skin tones, so we set the video within blank, white walls, and used monochromatic costumes. White pants for the man, and black for Alice — a further contrast between them, a division of power. This let the colors of their skin become the focal point. The colourless, empty backgrounds helped keep up a feeling of detachment, while the close-ups of raw skin meanwhile gave it a sense of intimacy. This contrast of themes was a perfect match for the concept, which blended Alice’s impersonal treatment of the men with her very personal contact with them.

I wanted to let the main color palette come from the men’s varying skin tones.

As I mentioned earlier, the song was Alice’s response to some bad experiences. Thus it was important to make this video a fun, positive thing for her. So for the “objects,” Alice enlisted a bunch of her friends and bandmates, which made the shoot fun. It also made Alice, and all of us, a bit more comfortable with the idea of subjecting these guys to some fairly humiliating and uncomfortable poses. The couch was painful, I’m sure! I was constantly apologizing to all the cast, and in order to minimize the time they had to be in those positions, we ran through all the shots with stand-ins until they were rock solid, before we would finally get the guys into their poses. Luckily, everyone had a good sense of humor about it.

The shoot was in Berlin, where Alice is based out of. I’m in NYC, and I could only get there in time for one prep day before the shoot, which was spent on gear checks. There was only one shoot day, and I didn’t have a chance to visit the location before the day of. So when I arrived, I found that the usable space was much smaller than I’d thought — a lot of area that I had seen from scout photos was now filled with stuff that we didn’t have the time or capability to move. I had to get creative about how we could use the space and which angles we could/couldn’t use.

We had a lot of guys as the “objects,” but didn’t need all of them all at once for most scenes. So we staggered their call times throughout the day, leading up to when we needed all of them at once, then released them in reverse order. 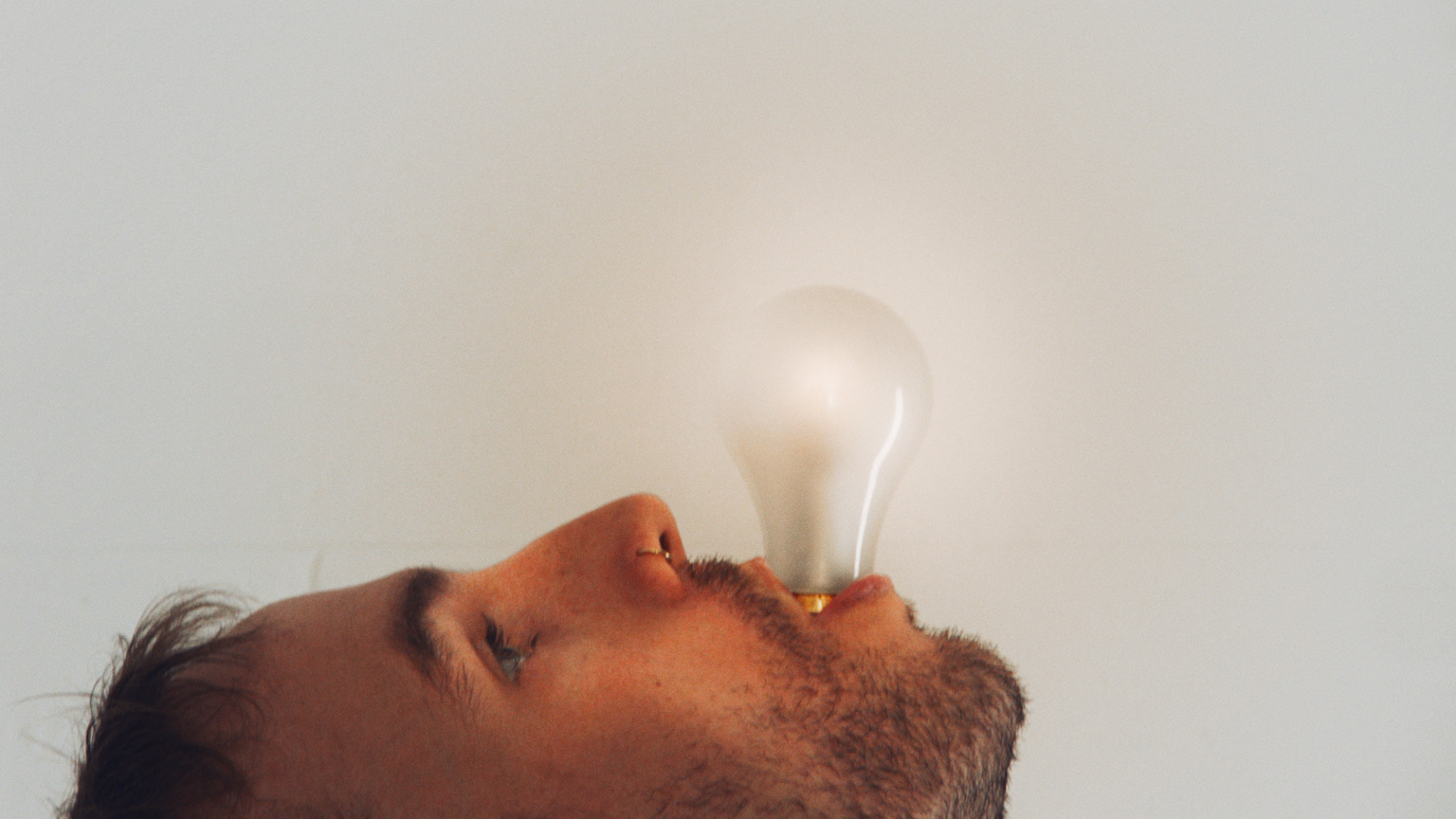 A note about the lightbulb that lights up in the man’s mouth, that was real! No VFX involved. I always remembered a scene I saw in The Addams Family as a kid, where Uncle Fester lights up a bulb in his mouth. So I wrote those shots but then had to figure out how it was actually possible. I really wanted it to be practical. I ended up finding it in a magic shop. It has a battery inside and lights up when the screw end touches another piece of metal. So I had to put a strip of tin foil inside the guy’s mouth, which he then pressed against the bulb with his tongue when Alice sang “screwed it in.” Magic!