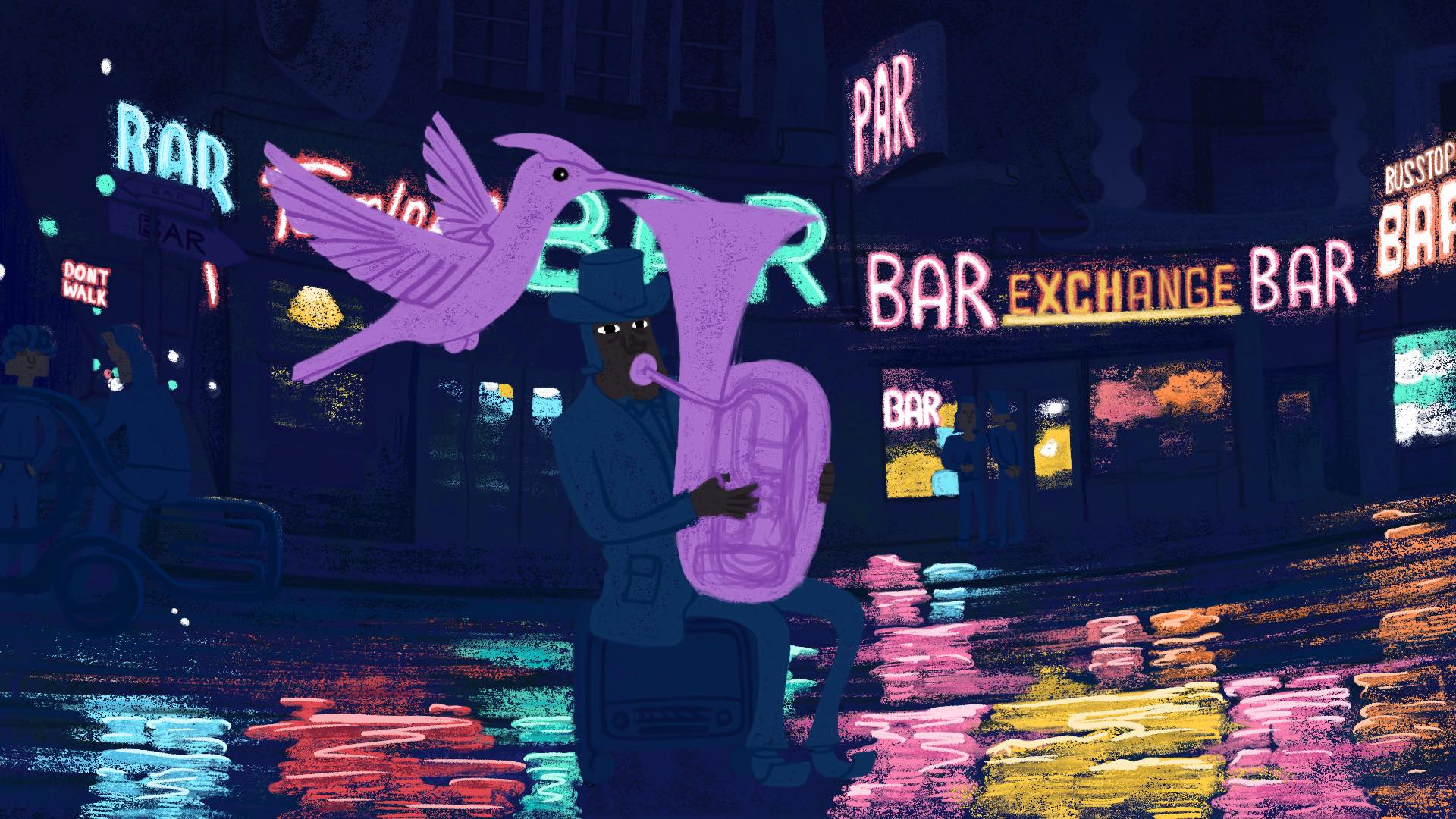 One of the things I’m always interested in when speaking to filmmakers is the inspiration behind their narratives. The work of Estonian Animator Martinus Klemet (last seen on DN here) is always a solid reminder of why this question is often prominent in my interviews. Always pushing boundaries with his storytelling, it’s hard not to watch a Klemet film and puzzle on how he came up with his concept. His latest film Angel’s Trumpet is no exception. A bizarre tale of tubas and hummingbirds, Martinus returns to Directors Notes to explain the motivation behind his recent work, provide an insight into the production and tell us what he’s working on next.

Welcome back to Directors Notes Martinus, looking through our archives today I realized this is going to be the fourth time we’ve featured you on our site and with each of the previous films, my first thought was always…where did he come up with this idea! So let’s start with that, can you introduce your film to our audience and explain how the idea originated?

Thank you Rob, it’s always nice to be featured on Directors Notes!

Inspiration for this film came to me from the plant Angel’s Trumpet (Brugmansia). One of its many breeds can be pollinated solely by a very long billed hummingbird. Only this bird is able to reach the core of the blossom and drink the flower’s nectar. It took millions of years of evolution to develop such cooperation between the bird and the plant. I was amazed by this interesting synergy and played with the idea of what could be the next step in the evolution of hummingbirds?

I would be delighted if viewers found new meanings in this so-called animated poem.

Angel’s Trumpet is quite a light, fun piece, but reading through the synopsis there’s some deep thought gone into its narrative. Apart from being entertaining, what were you looking to achieve with this film?

My intention actually wasn’t to forward any specific message with this film. It’s quite short and feels like a poem to me. I knew that there’s something in the idea and that I’d like to take this journey to execute it. At the same time I would be delighted if viewers found new meanings in this so-called animated poem.

Due to the nature of your film, the soundtrack obviously plays a key role. Can you explain a little about how you sourced the music and did you set the animation to the music or vice-versa?

I was listening to a lot of tuba music since it was clear from the very beginning that is had to be that particular instrument. Tuba has this nice low-pitched comic sound and I knew it would fit my idea perfectly. Finally I discovered Rossini’s William Tell Overture virtuosically performed by the Melton Tuba Quartet from Germany. While I was listening to it I thought “VAU! That’s really fun and exactly what I need!” I’m very grateful that they allowed me to use their interpretation of the piece in the film.

It was a lot of paperwork to get the rights to use this piece but all ended well.

Another piece I used is Capriccio for Tuba Solo written by a legendary Polish composer Krzysztof Penderecki. It is a serious composition but it sounded quite comic for me as for a guy from the streets (without any music education). I felt it would fit well to the first part of the film. It was a lot of paperwork to get the rights to use this piece but all ended well.

First I drew a very rough storyboard and then started putting together the music and the storyboard in After Effects. I used the very beginning and ending of the William Tell Overture. Cappricio for Tuba Solo wasn’t used entirely too. I had cut out different pieces I liked and put them together with my storyboard drawings.

Your film revolves around a series of vignettes involving musical instruments and hummingbirds, visually I’m really interested in the design of the characters and their environments. How did you go about deciding on the characters you wanted to include in your film and were the backgrounds (which are lovely by the way) inspired the characters?

I used photos of different tubas and tuba players as a reference for drawing stylized characters. Stylizing characters was like a game – I tried to draw everything as 2D planes (like paper cut outs) in a 3D space. I believe limiting yourself to some rules can lead to interesting results sometimes.

I followed the same principles while drawing backgrounds. I tried to keep painting quite sketchy and with a lot of texture to achieve an analog feeling to the picture as the music is also performed by natural instruments. I spent a lot of time finding bold color schemes which would satisfy me. Most shots have two main colors which have a tension between each other.

Quite time consuming was animating the scene with a horse rider on a flamingo beach. I studied horse walking cycles from a book called The Animator’s Survival Kit by Richard Williams. I believe that it would be no point to invent a bicycle – many great animators have already found out how to draw these movements well.

Can you tell us a little about your production process – what software or tools did you use, how long did production take, who was involved?

The picture is entirely created digitally drawn with Wacom Cintiq. Backgrounds are painted in Photoshop, characters animated in TV Paint and compositing done in After Effects. The production took too long 🙂 About 5 months. Although I was busy with some smaller projects during that time.

I would also like to thank my colleagues Olga and Priit Pärn who gave me constant feedback.

Besides music there are also sound environments and sync sounds in each scene created by a great Sound Designer, David Kamp from Germany. He also gave me some valuable feedback regarding the final edit of the film. I would also like to thank my colleagues Olga and Priit Pärn who gave me constant feedback since the beginning of production.

I have just finished a script where I further developed this strange world of tubas and hummingbirds. It will be ~10 minutes long animated film called A Murder of Hummingbirds. In a way it will be similar to my previous film Fatcula because I am planning to twist and roast a well known dramatic structure to tell my own story. The production will most probably start this year.

Thank you so much for your questions!

Angel’s Trumpet is one of the many great projects shared with the Directors Notes Programmers through our submissions process. If you’d like to join them submit your film.