It’s been a few years since we spoke to Maegan Houang about her horror on the Oregon Trail promo Black Sail and so we’re delighted to welcome the LA based writer/director back to DN today with Chatroom – a powerful music video for Brooklyn four-piece Charly Bliss which transposes shared experiences of sexual assault and abusive power dynamics within dysfunctional relationships to the story of a young woman who vies for the attention of her charismatic cult leader. Watch Chatroom below, after which Maegan shares how she deftly deployed the shorthand of allegory to address the pernicious damage of rape culture.

I came up with the concept after listening to the song and speaking to the lead singer Eva Hendricks. As she discussed in her interview with Maria Sherman in Jezebel, she wrote the song about being sexually assaulted by an ex-boyfriend and the abusive relationship between them. I had undergone a similar experience during college and the way in which I had tried to rationalize and excuse his behavior toward me always felt like I was under a spell. I had loved this person so much that it became incredibly hard for me to fully process and understand that he had the ability to violate and hurt me so profoundly. I told very few friends, and zero mutual friends, at the time in fear that no one would believe me.

In many ways, rape culture is a cult (and often, vice versa) and depicting an abusive, manipulative and misogynistic cult leader seemed like an apt allegory to what both Eva and I had experienced. Neither of us wanted to display the act of sexual assault. To me, it’s hard to convey the gravity of such an incident via short form content. Relying on the audience’s pre-existing understanding of cults and how they work functioned as an efficient narrative vehicle for the emotional experience we both wanted to express. There are artists that would probably be turned off by the irony of doing a more serious concept with an upbeat song and I feel very fortunate that Eva and Charly Bliss were not only open to the idea but also enthusiastic about it. 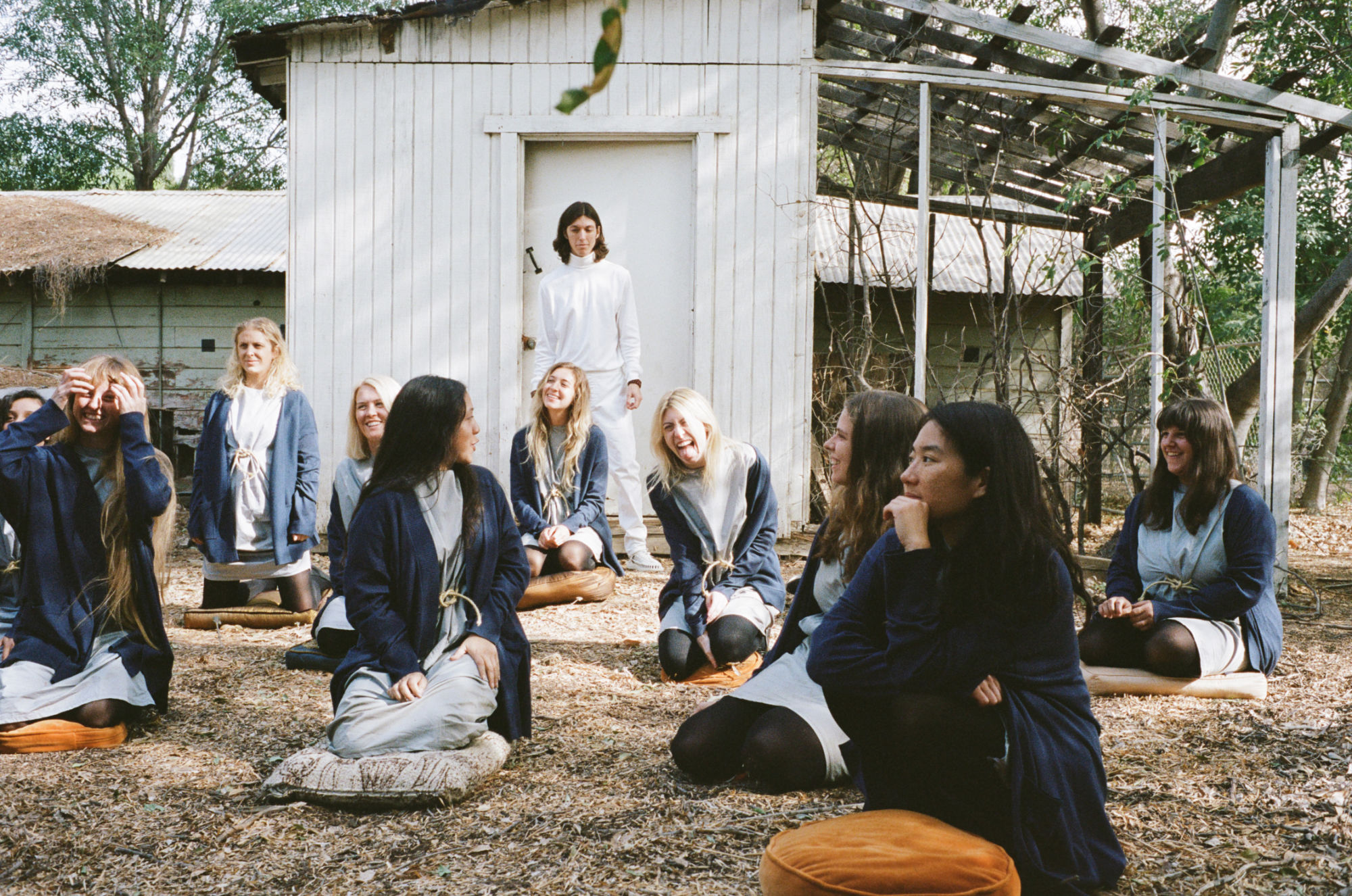 Depicting an abusive, manipulative and misogynistic cult leader seemed like an apt allegory.

One of the bigger challenges of the shoot was casting the film on a low budget. I initially envisioned that all the women were white with blonde hair and vaguely resembled Eva. Many cult leaders, like serial killers, have a “type”, whether it’s physical attributes and/or personality traits they desire when recruiting members. In my mind, these young women were often lured from their families at a young age and recruited based both on their physical attributes and deep insecurities. Without dialogue, it was impossible to convey a personality type so I decided to lean into the physical attributes to up the creepiness factor that he was targeting very specific types of women. The similarity of appearance between the women also emphasizes that to him, women are interchangeable objects. With such a low budget, however, we relied heavily on favors and friends to work as extras and it was difficult to find everyone who fit such a specific physical type.

During prep, Production Designer Eloise Ayala and I did our best to brainstorm the cult’s principles, symbolism and paraphernalia. Many cults in the past have placed a lot of weight in triangles, and we decided that Simon, the cult leader, would be obsessed with a large black square. Even though it doesn’t necessarily have explicit meaning within the video, we put black squares in the background to heighten the feeling of something spiritual or obsessive happening in the space. One of the most fun parts of prep was creating the cult’s paraphernalia — from the photos on the wall of the “chosen” women to images of Simon that he displayed.

One thing Eloise and I really responded to in our research was how often the cult’s paraphernalia, creative endeavors or living quarters was quite low-rent or cheaply done. We decided, both for stylistic and budgetary reasons, that this cult did not have copious sources of funding. For example, we imagined that Simon would have likely asked one of the young women to take photos of him around the property and tried to intentionally make them look amateur.

Fun fact: All the fake flowers in the Sacred Room were flowers I have been hoarding for years in my garage! I just got rid of them earlier this year. Also, the rest of the band (Spencer, Dan and Sam) spent an entire day painting the Red Room red and we really wouldn’t have been able to finish without their help.

Neither of us wanted to display the act of sexual assault. To me, it’s hard to convey the gravity of such an incident via short form content.

This was my first time working with DP Joanna Nguyen, who was great, and after a few discussions, we decided to shoot in 4:3 for both stylistic and budgetary reasons. On such a low budget, we knew that we wouldn’t have the necessary background cast to make a wider frame feel crowded and make Eva’s character feel trapped. We also liked that 4:3 allowed us to stay relatively tight on Eva’s face and focused on her personal experience, despite being surrounded by all these other women. We came up with some rules before shooting including always keeping Simon, the cult leader, centered in the frame and only centering Eva once she gets “chosen”.

We shot for two days in a few abandoned houses in Northridge, CA. It was a difficult shoot; we ideally needed three days but wanted to save as much money as possible both for camera and production design. All I can say is that the Producer John J. Lozada made literal miracles happen to ensure this video happen on budget, including sleeping at the location both nights to make sure nothing was stolen.

We shot on an Arri Alexa Mini with Cooke S4 lenses. About selecting the Cooke series Joanna says: “I knew I wanted to shoot with the Cooke series because they had the warmth and softness I needed to oppose the harsh environment the girls inhabited. After landing on the S4s for that extra stop over the mini’s, we shot mainly wide open, with the exception of some daytime exteriors.”

I worked with longtime collaborator Gus Spelman to edit this project. We have a strong rapport and are both committed to editing until we both believe it’s the best possible version. In other words, neither of us are afraid to argue. During post, we decided to use VFX to add more black squares in the background and add a square of the screen when the blindfold is placed over Eva’s eyes. Once Eva was chosen, Simon was taking her to finally “see the light,” to fully understand the Black Square. As the end of the video indicates, this moment of realization is suggested, but never fully reached and Eva had to face the reality of the demented games Simon wanted to play with her and her friend.