A widely celebrated music video when it hit the web last year garnering a Vimeo Staff Pick Best of the Month and going on to win the Jury Award at SXSW, Director Kristian Mercado Figueroa’s promo for Hurray for the Riff Raff track Pa’lante takes us inside the Puerto Rican experience of life post Hurricane Maria and the pressures facing an estranged family attempting to reconnect amid the wreckage. A narrative which has very much stayed with us since our first viewing, DN invited Kristian to share how a strong desire to do justice to his cultural heritage in the face of indifference inspired this potent film.

The project emerged out of the tragic circumstances surrounding Puerto Rico. After the Hurricane hit, I found myself really personally affected, being a Puerto Rican director myself, I felt a deep obligation to seek out a project that could give people a sense of the Puerto Rican story, and convey the sense of loss. Puerto Ricans are kind of invisible in society and when we look at the media response towards the Hurricane, it became really clear to me that unless I made a piece concerning Puerto Rico and channeled my own pain into a piece, it might not happen.

Connecting with Alynda Segarra of Hurray for the Riff Raff was a big moment for me. Finding another Puerto Rican artist who understood and connected to that feeling. She really empowered us. During the three months I took off post-Hurricane Maria, I mostly spent time with my displaced family in my mothers NY apartment. We grieved and bonded. I have to admit that after that my priorities and life changed. As I sought out projects, that might help me convey this emotion, I also faced a few challenges.

It felt strange to be a Puerto Rican director but be rejected from telling your own story and seeing a white male director was deemed more competent to tell the story.

Prior to Pa’lante, there was a commercial project dealing with the Hurricane which I was passed on. It felt strange to be a Puerto Rican director but be rejected from telling your own story and seeing a white male director was deemed more competent to tell the story. It hurt a lot. So I started to develop a narrative based on parenthood and what that means. The theme is close to my own experience and day to day life growing up in Spanish Harlem.

As I was developing that my Rep found this track, Pa’lante by Hurray for The Riff Raff. I first heard the track when I woke up early in bed and I was still half asleep listening to the track. I teared up a bit. I never felt a song so closely explained my own feeling about being Puerto Rican. I told my Rep I had to do it, and I was still up against a few people, but once Alynda and I got on the phone, it was an instant connection. We understood each other in ways few people might. It hit hard and felt like a moment of clarity. She was moved by the narrative I described on the phone and then it was off to the races.

I never felt a song so closely explained my own feeling about being Puerto Rican.

It was approximately eight months after the Hurricane but conditions in Puerto Rico were still shaky. My aunt Yanira Figueroa actually helped coordinate and produce the film. We plotted out the days tightly focused mostly on what was important narrative. Tiffany Stephens the Assistant Director doubles as my writing partner and she has a wonderful sense of breaking the day down in a way most ADs don’t. When we work together, we focus our time and day more on what emotionally drains us the most or what feels like it would need time to breathe. We focus a lot more on what is the emotion of a scene and avoid trying to feel rushed when we get to those moments on set. I like to explore a scene and find what makes it feel like truth the most, which is a difficult process.

Rudolf the DP is really clever narratively too. We have a lot of conversation surrounding the movement of camera and place based on the actions occurring in the scene. We don’t really traditionally block which can frustrate certain DPs but my sets are more actor driven so Rudolf is amazing at finding movement and framing that isn’t just aesthetic but means something more. We explore spaces occupied and spaces with absence, I feel it allows the audience to feel gaps more. When they can’t find something or someone they seek it out subconsciously and yearn for it sometimes not knowing why. I think in that yearning, we feel the pain of loss can be conveyed.

The way me, Tiffany, and Rudolf all work together is very family style. We become really intimate and allow for truth to emerge on the frame. We aren’t really focused on the artifice of film but rather what connects most to people, the threads that bind us together. Mela Murder and Kareem Savinon really brought a lot of their own truth into the film. Mela Murder (The Florida Project) has such a keen sense of emotion, she’s such a vulnerable, honest human that it’s remarkable what happens when we work together. Our styles mesh so well. Mela really embodies the power of motherhood, in some ways she reminds me of our ancestral mothers. Mela evokes something bigger than herself and in some ways shares that with all of us when she’s on film.

I like to explore a scene and find what makes it feel like truth the most, which is a difficult process.

Kareem is a father himself and together we spoke at great length about fatherhood. I opened up to him about my own experiences with my father mostly unpleasant, but then contrasted that to my Grandfather who died in the Hurricane, who was a very kind and noble man. When creating the characters of Milagros and Manuel what I sought out to do was create reflections of people I’ve met and experiences I’ve felt. I know so many Manuels and Milagros whose stories go untold, which in part is inspired by the work of Puerto Rican poet Pedro Pietri. It brings me great sadness to know a lot that their stories aren’t told. 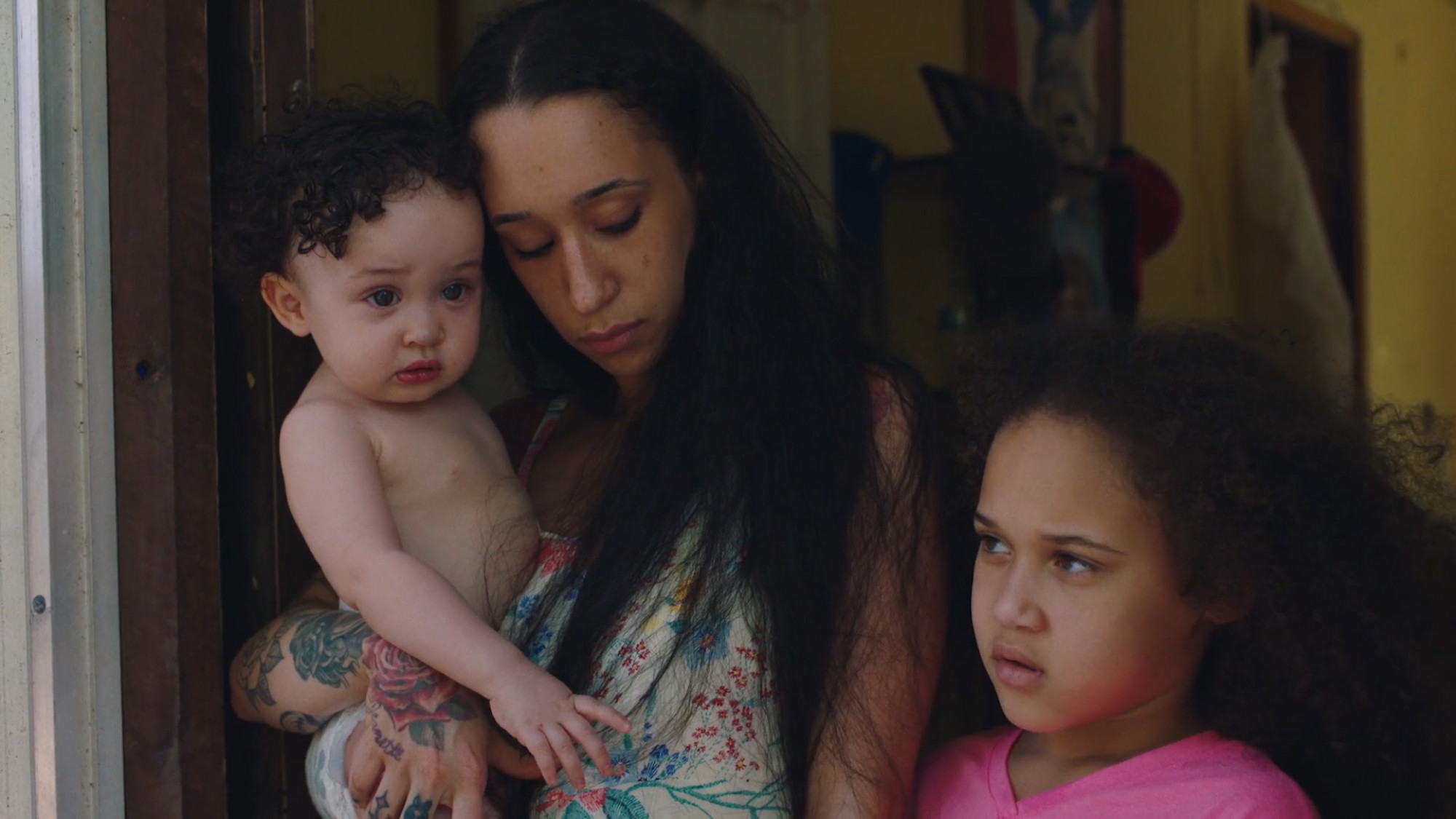 The editorial break which was Michael Reuter the editor’s idea in the middle gives us a wake up call. The classic poem by Pedro Pietri breaks into the film, and we see Alynda as a spiritual successor to that Puerto Rican tradition of storytelling. Dead Puerto Ricans originally spoke on the idea of the working class Puerto Ricans working day to day without time to escape circumstances. Now it takes on new meaning, as we lost thousands in the hurricane. We flash portraits of a diverse array of Puerto Ricans on screen to help show the diaspora but also connect with the audience that we are real people. It helps bring us to a more real place for that moment. It almost becomes a documentation for this instance that connects our individual lives with something bigger more universal and ultimately human.

We shot on Alexa with only one lens. The reasoning for one lens choice was to force the audience into one fixed perspective. So if we needed to frame up we had to move as if we are a character in that scene ourselves and suddenly everything becomes more real. We are there and we are also forced to view the world as the characters do, we don’t get to break into a wider or narrower perspective but rather are translated into one reality at all times. I and Rudolf are huge fans of the 35mm lens. It brings a certain dynamic weight to a sense that we both are always attracted to. The movement feels richer, the way the world feels more real, and framing to that perspective forces us to move in interesting ways.

We shoot music videos as if they were indie films because for me that line doesn’t exist.

The project took nine days of shooting. Four in NYC and five in Puerto Rico. The editorial process was about a month. We ended up with about 14 hours of footage. That sounds like an absurd amount for a music video but our process requires a lot of takes and finding moments, and seeking out the most impactful real moment. We shoot music videos as if they were indie films because for me that line doesn’t exist. Since I don’t come from means, any budget is really an opportunity to explore a film. Being a broke filmmaker sounds like a cliche but when you are a marginalized broke filmmaker the chances you get are even slimmer. Pa’lante for me was a real opportunity to explore something I often don’t get the opportunity to explore traditionally. It felt vital and I still feel a great sense of obligation to explore the Latinx perspective.

My biggest hope is that Pa’lante really has connected with people on a deeper level. That in a time of social callousness and virtue signalling, that people who have seen it can feel the pain of loss for a moment and try to see Puerto Ricans as people too.

Pa’lante is one of the many great projects shared with the Directors Notes Programmers through our submissions process. If you’d like to join them submit your film.