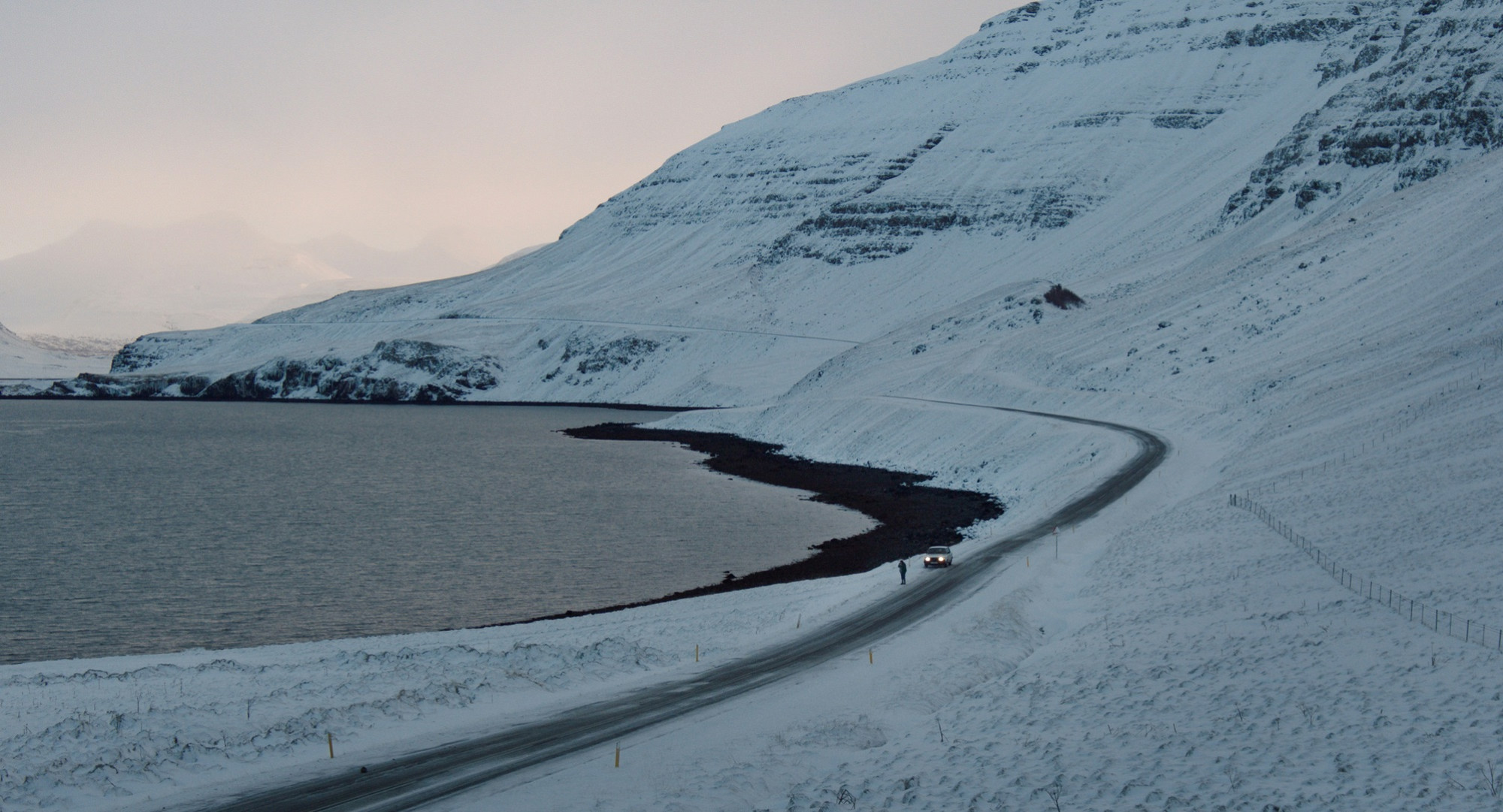 A rightful recipient of a Vimeo Staff Pick Best of the Month laurel, Erlendur Sveinsson’s Columbia University School of the Arts thesis film Kanarí, transports us to the snowy climes of Iceland, where a couple on the road struggle to find a mutual purpose in their new destination. A film which firmly lodged our hearts in our mouths – better you watch for yourself than we risk diminishing its impact – DN invited Erlendur to tell us how a sudden shocking life experience led to the creation of this immersive short which explores the rawness of the human condition.

Kanarí was definitely the most challenging and ambitious project I have ever set out to do. It was a real rollercoaster ride. I got into a serious car accident in April 2007. I was on my way home in my dad’s new pickup truck after dropping some family friends off at Keflavik airport. I had been driving for a half hour with the radio and AC turned up and the cruise control set to 55 mph. I wasn’t tired, but for some reason, my eyes began to feel heavy and started to close; I zoned out. The next thing I remember I was mid-air, flying off the road and heading straight into the lava fields.

The truck crashed into the jagged rocks with a deafening crunch but for some reason didn’t flip over. It came to a stop and it took me a couple of seconds to realise what had happened – I had gotten in a car accident and survived without a scratch. Stepping out I saw the mangled and crooked side panels of the truck. A local cab driver came running from the road asking if I was okay, I nodded. It is the scariest thing I have ever experienced and something I still think about to this day. There are a few things in life that you just can’t put into words, the experience of getting in a car crash is one of them. The sound, the surprise and the overflow of emotion when it finally comes to an end. This is the moment that inspired me to make this film.

There are a few things in life that you just can’t put into words, the experience of getting in a car crash is one of them.

Kanarí is my thesis film from Columbia University School of the Arts and I wanted to create an immersive experience that captured this intense feeling. One could say that it was a way to get over the experience I had. The first image that came to me was the opening shot, that was my generative image. An infinite open landscape, peacefully sublime. A car in the distance emerges. The shot had to be extremely wide to capture the beautiful contrast of the small car in the vast grand nature. I wanted to feel the time tick, to portray the long distance that lies ahead without saying it. You see it in the landscape, the extreme isolation. The road ahead seems endless.

My wife and I have been together for over 10 years and it is often during road trips that we have long heartfelt discussions about our deepest feelings, emotions and concerns. I was excited to portray the relationship of my characters only inside the car. From the beginning, I was dead set on having the camera inside the car and not cutting between angles during the crash to make it as realistic as possible; Quick, surprising and shocking. I watched a ton of dashboard car crash videos that ended up being very helpful in figuring out the execution of the crash.

I can’t say that the story came naturally, there were so many ways to go. Ultimately we figured out that the story was about the confrontation with the other driver. It really is about that moment when she is suffocating him and what’s going through her head. Through research, I found out that it is actually quite common to act violently when suffering from trauma after a car crash. The canary flying away at the end then felt like the obvious release from the emotion and made a somewhat satisfying ending. It was sad but hopeful at the same time.

We shot the film on an Alexa Mini with Arri master primes in 4 cold days in January 2018 with roughly 6 hours of daylight in a day. We had a very strict schedule so every minute of daylight we were rolling. Therefore the prep had to be very thorough, every shot storyboarded, scenes rehearsed and all technical aspect like the rigging and VFX work practiced before the actual shoot.

Everyone involved brought incredible energy and talent to the project. The actors were unbelievable and showed immense strength in the cold, harsh conditions with the help of a great production and costume team that kept them warm between takes. Vivian Ólafsdottir our actress had a few months old baby boy and was breastfeeding him in between takes. I was worried that it would be too much for her and possibly interrupt her performance but undoubtedly it benefited her. It gave her immense focus, a creative spirit and influenced her performance in a beautiful way.

I was dead set on having the camera inside the car and not cutting between angles during the crash to make it as realistic as possible.

I worked closely in prep with DoP Karl Óskarsson and we storyboarded the film together. I cannot begin to express the amount of gratitude I have for his incredible devotion and expertise in our collaboration. He brought a unique vision to the piece as well as a lot of experience on set. Together we decided on the 1:85 aspect ratio over the landscape friendly 2:39. We wanted the audience to feel close to the characters and emphasise the realism at play, not enhance the beauty of landscapes.

I believe that art can be very therapeutic and we make it to express ourselves and influence others.

We edited the film in about 6 weeks. There are roughly 10 VFX shots that were all quite challenging. I get asked a lot about the bird flying away at the end and how we did the car crash. The quick answers are that the bird at the end is not real, it is comprised of two pieces of stock footage edited together. Then, the car crash is two shots spliced together. The last part of the interior car scene is shot in front of a green screen and the exterior footage in the window shot separately. That shot was very challenging and took a lot of practice. We rigged the camera in the trunk of a car then rigged the colliding vehicle to a towing truck. Lastly, we shot the towing truck dragging the vehicle away from camera at the same time as the camera car was driven in the other direction. There we had our shot, we reversed it and painted the pickup truck out in post.

I believe that art can be very therapeutic and we make it to express ourselves and influence others. Making Kanarí was extremely rewarding and I have been thrilled by the reception it has received. It has surely been satisfying to get this off my chest and tell this story.

I currently have a couple of very exciting projects in the loop, both short form and long form. Most notably, I’m gearing up to make my first narrative feature film called Seven Balconies. It’s a character driven ensemble piece with intertwined stories set in an apartment building in the suburbs of Reykjavik. I’m beyond excited to start rolling.