The trick to a good showreel is cohesion. Quite a lot of the time they look impressive but disjointed due to shooting on multiple formats for different purposes; commercial work, narrative work, experimental, etc… It can be tricky to blend such distinctive shooting formats and styles. However, Director Francesco Di Giorgio cleverly melds the forms used throughout his career so far, incorporating them into a narrative about a world with increasing screens. DN spoke with Di Giorgio about his impressive blend of story and showcase.

Where did the idea for Live | Breathe | Watch begin?

At first I wanted to do a new showreel. A little bit for fun and a bit for work. But, talking about showreels, I always thought that it was a bit limiting to do a simple edit of your own work, 90% of the time the result is something narcissistic, and it should be fun to see the ‘best of’ someone’s work.

For these reasons I thought I would use my work to make an original artwork. I wanted my videos to be ‘actors’ in a story. Following this path I began to think about a plot. Something that had a beginning and an end, a short story, a short movie. I liked the idea that the videos worked alongside someone in the flesh and that somehow one determined the behaviour of the other.

The thing I was sure of is that I wanted a protagonist, a girl, a seductive but discreet figure. I wondered about this idea for almost a year, waiting for it to take shape and for the right moment to achieve it. The more time passed the more I added details: the screens that influence reality, the girl in different situations and in different locations.

I always thought that it was a bit limiting to do a simple edit of your own work, 90% of the time the result is something narcissistic.

That always happens to me, there’s a great confusion in my head until something comes along, a clue, a signal, which unlocks everything and suddenly clears my mind. That sign arrived one evening, seeing Baby, a series on Netflix. I saw this teenage girl running on an athletics track with her friend. I thought ‘my protagonist also runs’ and I also thought that I had to shoot what I had in mind. I contacted Chabeli Sastre Gonzalez, she was enthusiastic about the plot and soon we filmed Live | Breathe | Watch.

Live | Breathe | Watch begins with a peaceful run in a forest and then as the film progresses, the young woman encounters more and more screens and the frame itself becomes propagated with an increasing amount of screens. Why did you decide to structure the film in this way?

I wanted to figure the girl’s world in multiple dimensions: from the screen of her cell phone to the green of nature. I wanted to keep an urban dimension to the whole but I liked that this contact with the screens went through every kind of context.

All the spaces in which the protagonist is located are a different pretext to see her relationship with images; whether she is sitting in front of a screen in her living room or she’s running in a park. The screens in this sense, for me, have a psychological dimension, I feel them as the imagination of the girl, her emotional and visual sensitivity. Their increase is like a trip inside her head.

For me, there’s also a huge scenic game. I really enjoy playing with devices and old cathode ray TVs, I find them beautiful and terribly photogenic. A video portrayed in the frame that transmits it to me is automatically transformed into an installation. I very often use monitors and old colour TVs in my works. When you film a screen, a CRT or a monitor immediately the device seems to have an identity, a past, a story, a biological age. Following this path I could portray both the videos and the actress with the same intensity, because, for me, Live | Breathe | Watch is also a work on beauty.

How many screens are in the film in total? What was your production process like and how long did it take to construct?

I never counted the number of screens accurately. About 80% of them are real and only in some shots we worked in post to multiply them. What I know, for sure, is the effort I made to find all these old devices. I called dozens of friends and colleagues asking everyone the same question “Do you have any screens to lend me? If it is old, much better!”

It took about two weeks to find all the monitors needed for the shoot, but the other 50% of the challenge was to have as many players to play my videos. I moved in this direction because I wanted all the night shots to be real and that Chabeli was illuminated by the light that the monitors emitted. The moment we turned them all on and we shot the night scene with the protagonist, the cinematographer, Antonio Scappatura, and I looked at each other and we realised that our idea was right.

I really enjoyed the score, it’s peaceful but heavily digital, can you talk me through the process of working with Büromaschinen to use his song and what you enjoyed about it?

I have known Büromaschinen since birth, he is known to the general public with another name and for other reasons, LRNZ (aka Lorenzo Ceccotti), an illustrator and visual artist. We always discuss our creative ideas and in this case, I expressed the desire to use one of his songs for Live | Breathe | Watch. I spent whole nights listening to Citywide, his latest album. There were many interesting atmospheres but Clockwork was the song I had fallen in love with and that I immediately felt as one with the images I had in mind.

It is a track in which there is nostalgia, intensity and rhythm. Lorenzo’s songs, as well as a large part of his work as an illustrator, have a strong digital identity and both the sounds and synths he uses also speak of an era and the period in which these instruments were born. This philosophy of technology that accompanies his work seemed perfect to me for a work in which the protagonists were devices. Actually, Lorenzo, Büromaschinen, was invaluable not only for the music but also for the post production process. If some images came out exactly as I hoped it is also thanks to him and his immense visual culture. 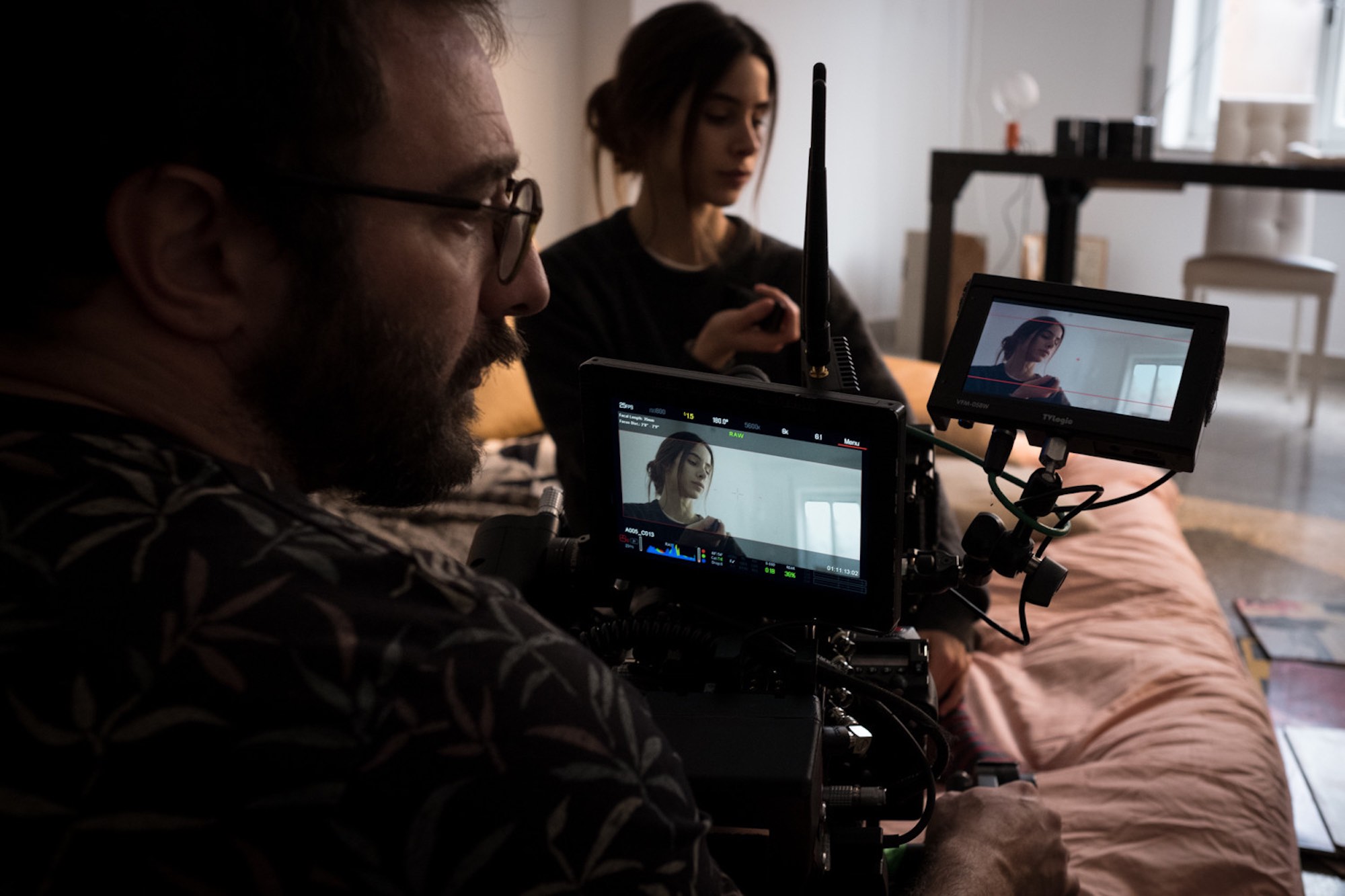 The narrative implies that through the impact of screen-based imagery we have become more image-conscious as a society, is this your aim with the film? And if it isn’t, how do you see the message of Live | Breathe | Watch?

Yes, this is a possible interpretation. There is no doubt that our confidence in images is constantly evolving. Just try raising your head in the subway and you see that there is nobody looking around, they’re all looking at their mobile phones.

But what I feel, and what I mean, is that the habit of a certain type of communication is naturally on the increase but visual sensitivity is not. Or at least it doesn’t go hand in hand. The fact that most people get used to understanding very fast messages or complex advertising communications happens only because they have them under the nose always and everywhere. Instead, being able to translate images, live them, interpret them and transform them does not belong to everyone.

I see my protagonist as a girl with a great visual imagery, a person who lives with empathy and the images that flow next to her. Where an advertisement becomes a work of pop art and a television program, a sort of laboratory on which to take notes to understand how human beings are made. A girl that lives a world of fiction while constructing itself, a sort of artist of the present engaged in a creative process. In general, I believe that Live | Breathe | Watch is a job done to leave more thematically free or, more simply, to be looked at as its title suggests.

How are you hoping audiences reflect on their relationships with screens?

Every director has a responsibility regarding what he offers to the eyes of the audience.

I work a lot with TV, I always deal with commercial content, often producing products for the mainstream public. Whenever I try a new job, I feel the responsibility of doing something that not only satisfies market needs but that, first of all, satisfies me. Even the simplest entertainment programs, for me, have their own aesthetic that must be respected, cultivated and innovated. Every director has a responsibility regarding what he offers to the eyes of the audience. His work may or may not like it, but it must always make sense. And have an intention.

Now, I’m making a short documentary series about an adventurer. It’s very fascinating because we are making these episodes with the footage that this guy has made around the world filming his incredible feats. Next to this material I have to film an original story that portrays our protagonist, a new challenge. This summer it will be broadcast on DMAX, a channel of the Discovery group.