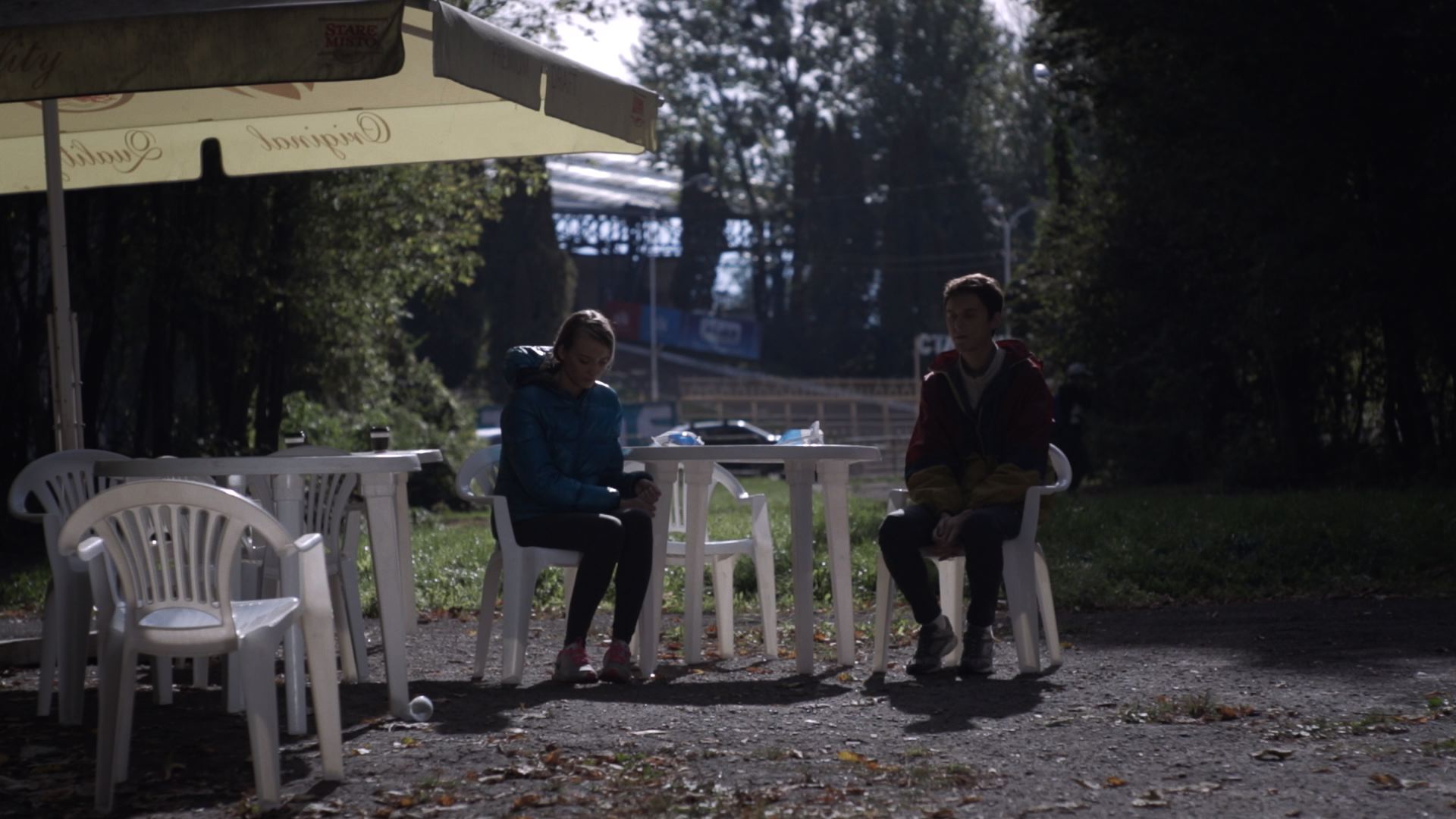 A recent graduate of the Netherlands Film Academy’s Master of Film programme, Ukrainian Writer/Director Mariia Ponomarova joins us today on Directors Notes for the online premiere of Ardea, the story of a gentle park run which rapidly escalates into a competitive battle of one-upmanship when two runners cross paths. Watch Ardea below after which Ponomarova explains how her small crew shot the film on the hoof and why creating Ardea enabled her to embrace the joy, rather than the competitive nature of filmmaking.

Where did the idea for Ardea come from and how did you get the project off the ground?

The concept of Ardea was developed 1 year before the shoot under the initial title of Arrhythmia. My friend Diana Olifirova – a brilliant Ukrainian DoP based in the UK – and I were visiting the Netherlands Film Festival in Utrecht. We were observing people cycling on the streets of the city – riding to work, to the cinema, carrying children behind, doing shopping, cycling fast and slow, stopping at the traffic lights and then leaving at their own pace. So I asked Diana, “What if they were all in an imaginary competition with each other?”.

Back then I had just moved to The Netherlands from Ukraine and as an artist, I was still very much driven by the competition in the film industry. I practically saw a competition in every single interaction. Something wasn’t right in this approach so I created a story initially about two competing cyclists, where the one who gives up joy and starts the competition inevitably loses.

I’d heard that the First Film Pitch in Lviv, Ukraine had been announced so I applied with this project. We won partial state support for this film and then the best local film organisation Wiz-Art.ua joined me to help with production. Even though the project was extremely low-budget, we took it as a challenge. 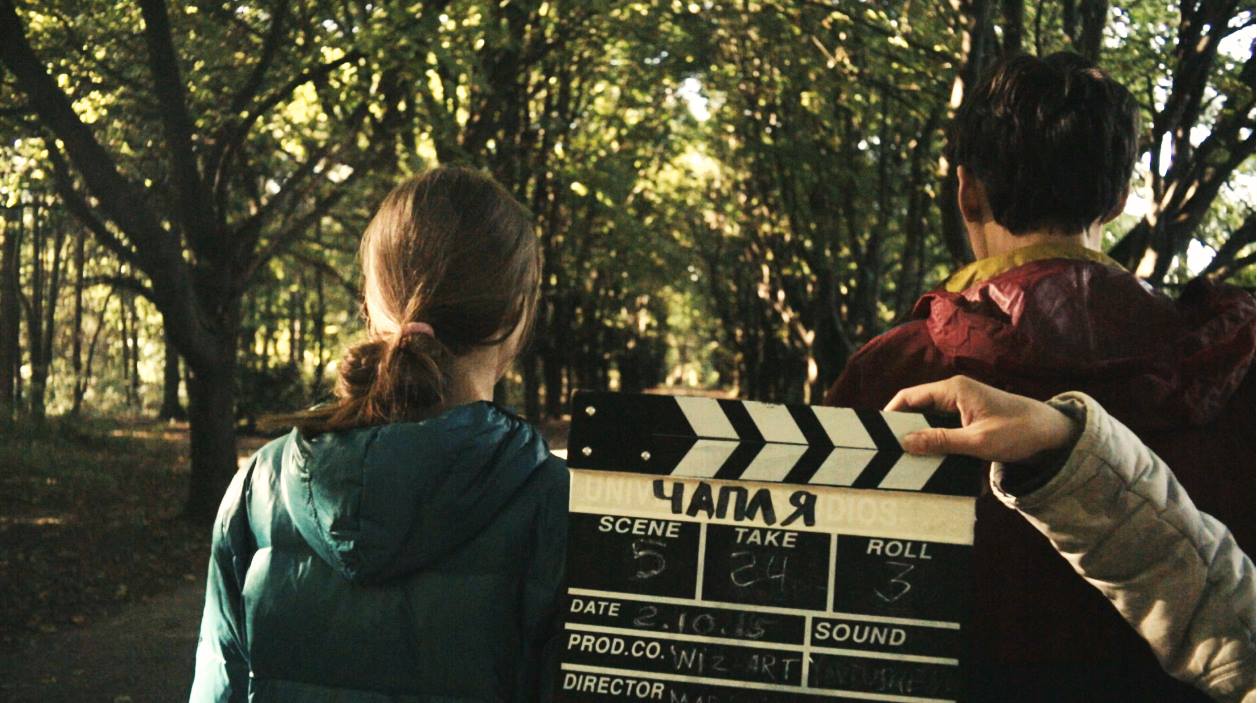 Normally casting focuses solely on the strength of performance actors can deliver but did this concept also require you to assess fitness?

Casting-wise, this film is quite special. Andrii Buchko is a professional actor, whom I once almost cast for another project, while Nataliia Zagasheva has a strong modelling background and was featured in the ad that I shot a year prior to Ardea. The fitness side of the casting I neglected, to be honest. I simply trusted both Nataliia and Andrii when they confirmed that running for a couple of days would not be a problem for them 🙂 I’m very thankful to them for accepting this challenge!

The constant running was a big physical limitation for both cast and crew.

Knowing their different strong sides while having their similarity in appearance – young, tall, strong but sensitive – the artistic exchange between these two strong personalities and the ‘ensemble’ feeling was crucial. Therefore, I think since both actors we’re physically always busy with running, it helped them to ‘be present’ in the situation and to make their silent communication more subtle and natural.

How did the constant running in the film of cast and crew impact the length and construction of the shots you were able to capture, as well as your choice of equipment for the shoot?

Of course, the constant running was a big physical limitation for both cast and crew. Therefore, I made sure to make a very clear breakdown of the script into shots with my 1st AD Asia Khmeliova, who was taking care of deciding which shots could be done from the car window, scooter or even had to be shot by the actors themselves, when it came to POVs. Also, we made sure to have enough static shots in the schedule in between the running scenes to give everyone some rest.

We couldn’t afford proper camera stabilisation or even a film camera itself so the film was shot on a DSLR. I’m endlessly grateful to DoP of Ardea Oleksii Kuchma who was very creative and ready to run, to shoot while riding a scooter, from a car window, and follow the improvisation of actress Natalia Zagasheva into the dark bushes with the camera. He definitely brought this ‘unpolished’, ‘noisy’, ‘hectic’ aesthetics to the film.

The shoot was extremely short – we had just 2 days and this limitation was also great: we were a small team and had just 1 location without a lot of equipment. This made us very mobile and compact, which was essential for the film where actors are constantly running.

The post-production was very interesting and quite long. Vasyl Yavtushenko – who runs sound studio 4 EARS in Kyiv – was saying that he didn’t break as many rules in any of the works that he did before Ardea and that’s true. At some point, we decided to get away from the sync sound in a couple of scenes and tried to explore sound in a more unexpected way.

Editing-wise, I was stuck a couple of times and couldn’t grasp the right rhythm for the story. However, I was very lucky to get a couple of great bits of advice from my former Netherlands Film Academy teacher Menno Boerma, who was an extremely passionate editor and teacher, but who recently passed away. He taught me to be playful and allow material to surprise you.

Do you have any new projects in the works at the moment?

I do. I’m working on my next short fiction film with the working title Cargo and you would not believe it, but the action will again be set primarily in a park. This time not in Lviv, Ukraine – like in Ardea – but in Amsterdam, The Netherlands. Being born in Kyiv and now living in Amsterdam, I’ve always been a city girl. So maybe the park for me is some other, special place in the urban area, where nature sets the rules and so many different stories can happen.

Also, I’m currently visiting short film festivals with my other fiction short film that I produced after Ardea, Family Hour. My next stop with it is Bosnia & Herzegovina: the Sarajevo Film Festival, where Family Hour is going to be screened in the Teen Arena section later this August. I think it’s very important for me to discuss and pitch my upcoming projects at such festivals, professional meetings and networking events since I always get a lot of new energy from the feedback and discussion. So I hope to get the best for Cargo there and other festivals where I’ll go soon.

Directors Notes is honoured to present the premiere of Ardea on our pages today. If you would like to join the filmmakers sporting a fetching DN Premiere Laurel, submit your film now.