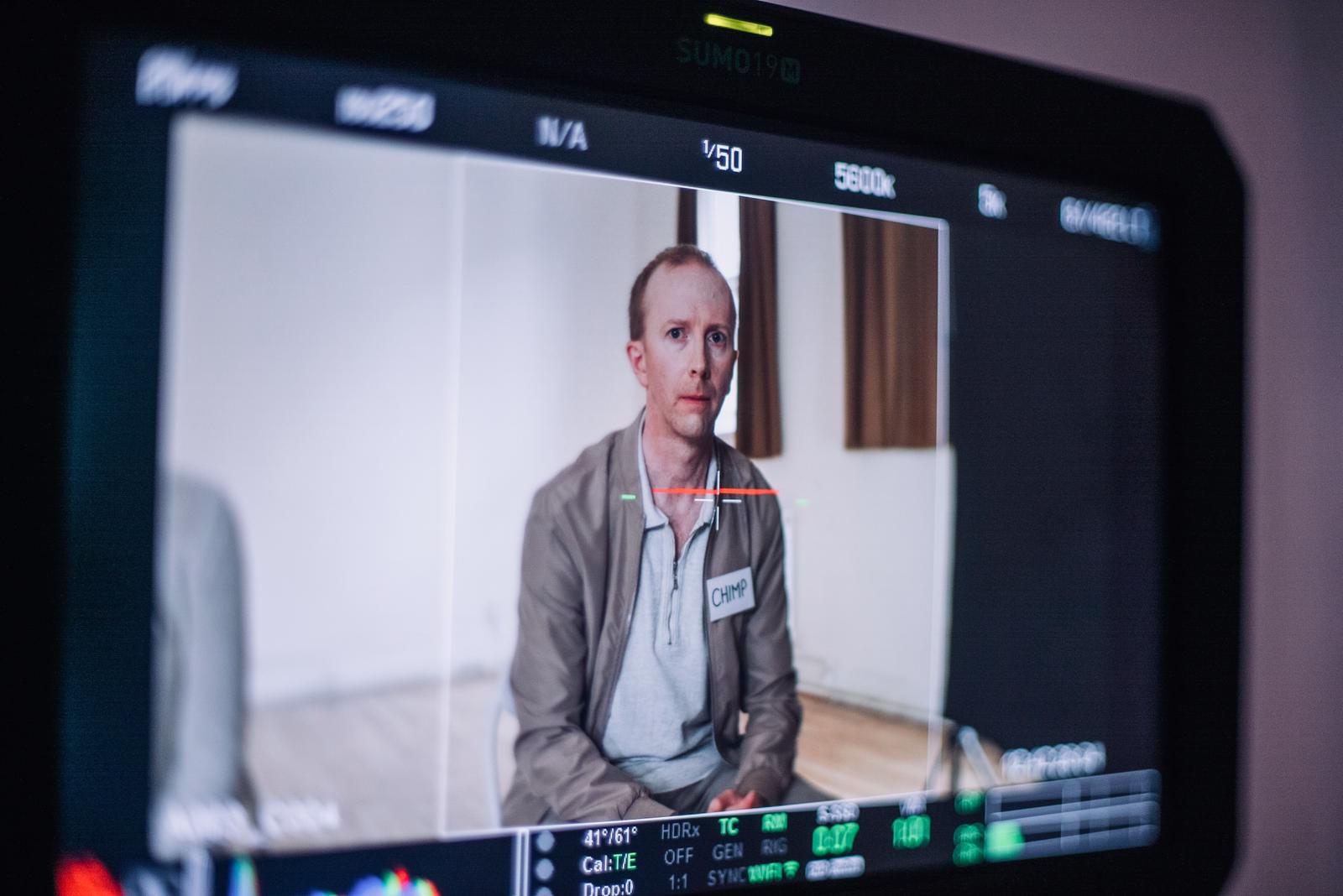 The study of conformity and the will of the individual versus that of the group has been rich fodder for psychological experiments for decades but what if you found yourself in the role of guinea pig? Would you go with the grain or try to show the majority the error of their ways? In escalating short Aping from UK writer/director/producer team Theo Gee and Ian Bousher, a man undergoing a not so simple test of conformity decides to give the researchers exactly what they want with darkly comedic consequences. DN sat down with Gee and Bousher to learn more about the inspiration and execution of their cautionary tale and why the pair wanted to push things to the extreme.

So that was odd… Where did the initial idea for the short actually come from?

Ian Bousher: It started out from a psychology study by a guy called Asch who was, unsurprisingly, doing research on conformity. It was one of those things you read about and then it sticks in your head and gradually becomes something bigger.

IB: Mm. When we sat down and started talking about a narrative with the experiment in mind, the challenge became finding what we wanted to say through the film. A comment on an individual’s experience within conformity, rather than how a group conforms (which has been done a lot), felt right.

TG: No idea what he’s talking about. Not a clue what that experiment or whatever is, I went to the zoo and thought, “What if those animals were people”. Wrote itself.

Going to extremes is sometimes the only way to get a message to resonate with people and get them talking.

Why that message though? Why choose this way to tell it?

IB: There was a personal element to it. Theo and I met studying psychology at university, so we definitely share an interest there, but going against the grain is something we’re firm believers in. We wanted to explore this idea in more detail.

TG: Didn’t we meet in a bar in Glasgow?”

IB: No, you don’t drink. And we studied in Nottingham. Anyway, the fact that Chimp rebels against conforming by leaning really hard into conformity was significant to us. It went the opposite way in our first draft and people we showed it to weren’t quite getting it. Now, Chimp uses what he sees as ridiculous questions to show the rest of the group how crazy they are, which shows off this amazing angry loneliness. He has sacrificed who he is in a completely different way, which hopefully nestles it into people’s brains a bit better.

How did it then grow from this idea/zoo trip into a final film? What did preproduction actually look like?

IB: Tone was crucial throughout the entire process. Make it too over the top and it becomes straight-up comedy, and dial it back too much and nothing emotionally lands. Cinematography, art direction, performances – all of it had to be planned pretty precisely to create this hopefully oddly unsettling tone.

TG: I had a super peaceful pre-production. Didn’t really do all that much, turned up on set, and everything was just sort of there.

IB: Alex, our amazing cinematographer was instrumental too.

IB: Alex? Our cinematographer? He helped craft the visual tone, using techniques such as starting with a 1:1 aspect ratio and slowly growing to 4:3 by the end of the film, a gradually widening lens and lowering of the camera throughout to represent each character emotionally “breaking”. Ring any bells? Theo, we spent a whole day storyboarding with him at your home…

IB: Okay. Finding the right actors was also key. There isn’t much dialogue in the film, so we needed actors who could use very subtle physical nuances to get across each character’s personality to the audience. We were incredibly lucky to work with such a talented cast who did just that.

TG: I actually spent the entire time trying to get Ice Tea on board.

And the shoot itself? Seems like a crazy one.

IB: It was actually really smooth! It was a one day shoot which always feels like a two minute shoot with how much you have to get done. Meticulous planning of shots, props, schedules, and rehearsing with actors meant that we still had room to improvise and experiment on the day though, which is always what you want.

TG: The shoot was very hot and people were running around in dog masks. It was very confusing.

IB: To be fair, people did keep trying to eat the prop cookies. That was an unexpected hurdle.

While we’re on the shoot, what equipment did you use?

TG: I chose the ones that looked coolest in the behind the scenes photos.

TG: Well I tried to get a cool abstract avant-garde French style montage into the middle of the edit, but I got outvoted.

The silence had to be more audibly engaging than the dialogue.

IB: For good reason. The edit was all about playing with pacing. The comedy works by highlighting the awkward moments, so we had to be bold enough to give shots a lot of room to breathe.

TG: You should have seen this avant garde montage though. Oh man.

IB: We used the grade to emphasise the conformity of the characters and of the room by lowering the saturation and certain colours to bring out this monochrome colour palette. Sound mixing was also key because of the minimal dialogue in the film. You learn a lot about characters when they’re quiet in Aping, so – in many parts – the silence had to be more audibly engaging than the dialogue.

TG: I didn’t notice a difference after either of those bits but I am told that they’re important.

Did you have any concerns about pushing the audience too far in the final scene?

IB: It is extreme, and it was difficult to write, but we were never worried.

TG: I found it very easy to write.

To close us off, any remarks on what you want people to feel after watching?

IB: Well we want people to essentially say “What the hell was that?” but in an endearing way. We want them to be entertained and engaged enough that their brain is trying to unpack it, rather than they straight up hated it. That’s where the fine line with the tone comes in.

TG: A fine line indeed. What does ‘tone’ mean again?”

IB: In short, we know that this film isn’t everyone’s cup of tea, and it’s really not meant to be. Hopefully it’s still entertaining, but we want to tell different stories in different ways. Not do the thing that the film is about.