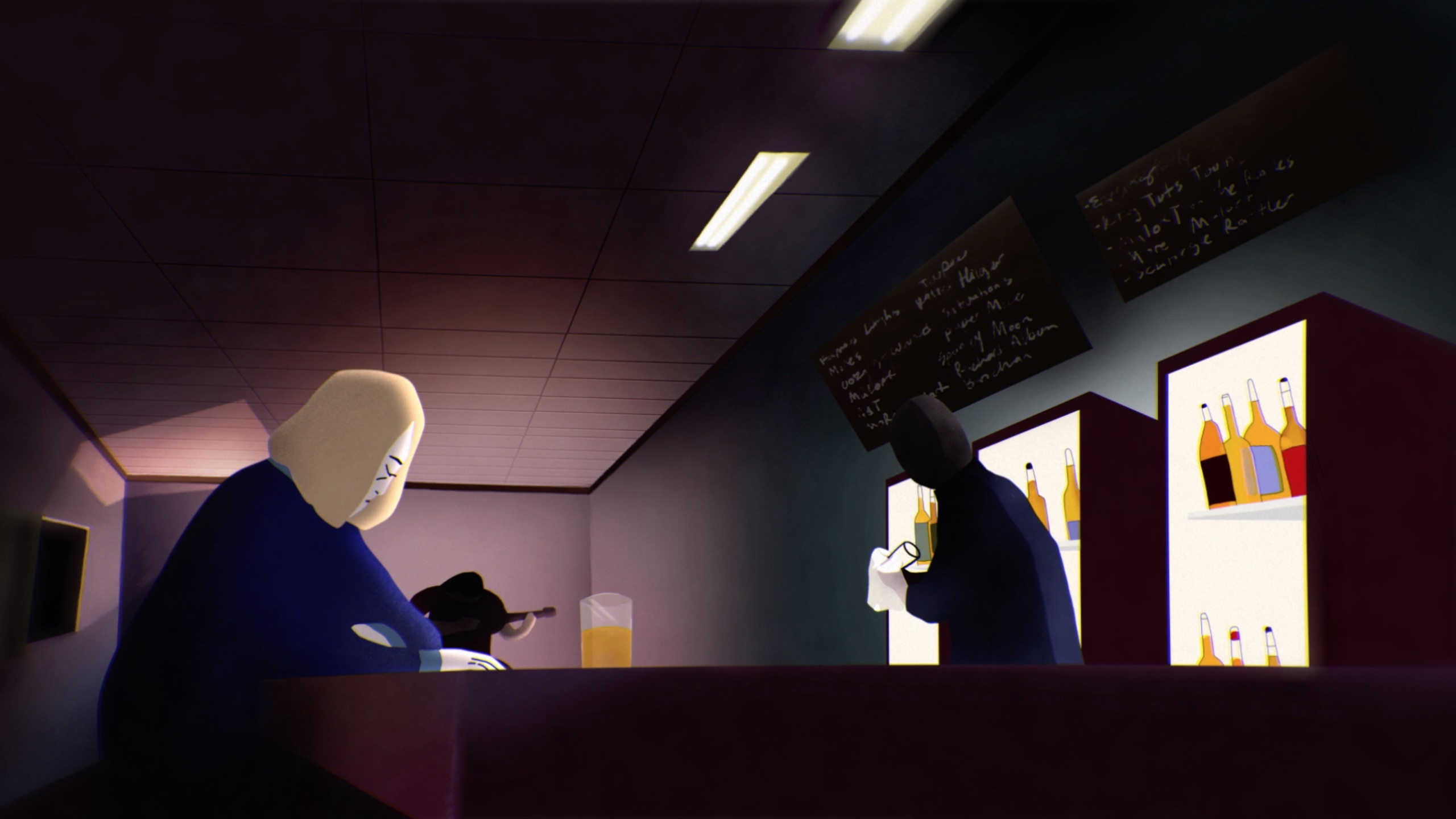 Whenever viewing submissions, for Directors Notes or Short of the Week, I always try to avoid reading anything about the film until after I’ve watched it. However, when the synopsis for a film mentions a “chatty corpse” and a “self-propelled peanut”, it’s hard to ignore something like that. Going into Jenna Caravello’s Cal Arts short film Frontier Wisdom, I was expecting something weird and unsettling and I wasn’t disappointed. Featuring some striking animation and a thought-provoking storyline, Caravello joins us to discuss making films about death and using religious symbolism in her work

With a synopsis that mentions a “chatty corpse” and “a self-propelled peanut”, I think it’s only right that we start by talking about Frontier Wisdom’s narrative – where did this story come from and what was your motivation to tell it?

I really had my father in mind. He worked for a Los Angeles phone company called PacBell, but I could never quite wrap my head around what he did, or where he went every day. Even still, I am a little frustrated by the mystery but inspired by it, too. I knew that he drove a white van full of cables, and that he was off to work every morning before I woke up. I had a fantasy when I was little, that maybe my dad wasn’t working at studios around LA at all, but that he was in fact having a daily adventure, somewhere out in the desert.

Thinking of my dad, the PacBell mystery, and adventures in the desert—I was inspired to make a film. Poetry by David Berman, spaghetti westerns, and long drives on the I-5 freeway also contributed some, and my film became Frontier Wisdom.

The film begins with this almost breezy driving sequence, before things start to unravel and become more and more abstract and unsettling. To me it felt like tone is as important as narrative in the effectiveness of your film, is this something you considered when making your film?

Oh, definitely. My life was going through changes, and I wanted to capture a really specific feeling that I couldn’t tell narratively. I had been living in Chicago for almost a decade, and then I made a snap decision to move back to Los Angeles. I pulled the rug out from under myself. Before I knew it, my dad arrived with a truck and we were road tripping west together. I didn’t grasp how deeply I was going to miss my life in Chicago until about 10 hours out.

At the same time that I loved driving with my dad, the scenery started to look alien, and nothing felt quite real. We drove into a huge rain cloud that tossed our truck around and I thought, this was the essence of magical realism—the physical rules of the world felt malleable, and the weather has become attuned specifically to my own heightened emotions. Long story, but I knew when I set out to make Frontier Wisdom that I wanted the film to feel ominous and unpredictable. 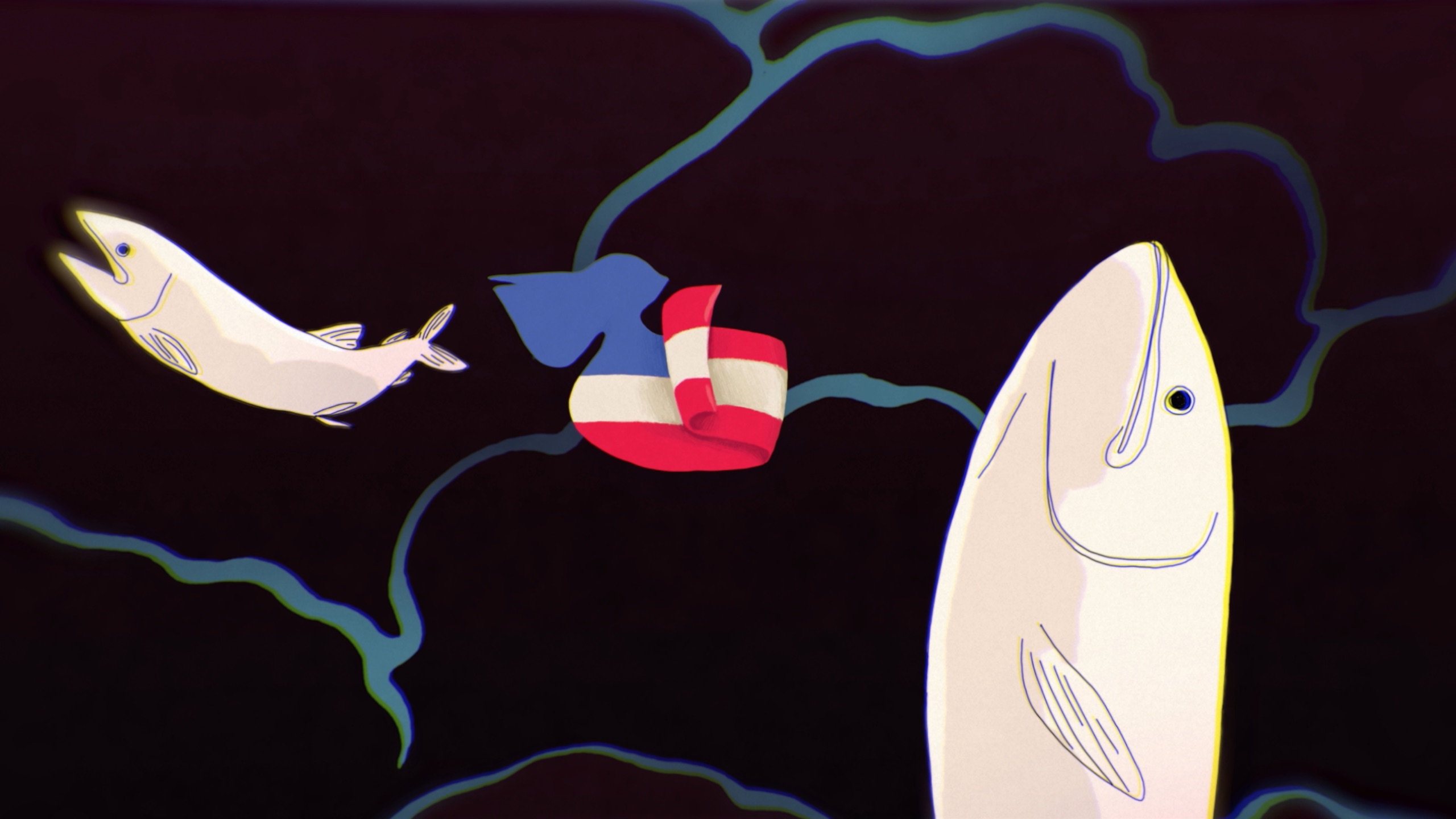 With the inclusion of your chatty corpse, the image of bodies floating skyward and several references to god, it feels like religion and death are strong themes of at the heart of your film, was there a particular takeaway you wanted to viewers to leave your film with?

Frontier Wisdom is structured in a kind of loop. It begins with an attempt to mend the phone line, which starts a flood of messages and portents of disaster, and ends similarly to how it started, with a broken phone and communication ultimately blocked. Most of my work is about death, but I think death can also represent change, for better or worse.

I am not religious, but I love researching religions and I’m especially fascinated by Christian symbolism. When I lived in the Midwest, I saw very sincere religious statements written in tiny rhinestones on a hat, and I thought, there are modern omens in the Protestant American landscape! In my film I wanted classic medieval symbolism like the Pelican to be equally as powerful an omen as the little porcelain lamb from the gas station.

Throughout the film the perspective changes from 1st person to 3rd person, what was your thinking behind this switch?

Thank you for asking, the change in perspective is so important to me! Though my reasoning for it is a bit simple. I wanted to signify a loss of agency for the main character. As if to say, here is the moment when the landscape becomes an equally important character, and it has a force of will.

There’s also sort of a warped feel to the aesthetic, can you tell us a little about your style and how you approached this film visually?

I really appreciate textural contrasts, and I try not to worry too much about drawing things accurately. Or, maybe I’d prefer to paint the texture of something accurately, and I don’t worry if its overall shape is bit off. I’ve been incorporating CG into my drawings and animations for a while now, though I didn’t consider doing that with Frontier Wisdom.

I wanted to get into an early 90’s mindset for Frontier Wisdom, because that would have been the quintessential time for me to dream up a desert adventure. I watched a lot of 90’s anime, and the first drawing I made was a turnaround, just to nail down the shape of my heroine’s stonewashed jeans and company jacket. I didn’t want her to look like me or my dad, so I began drawing her to look just a bit like Georgia Hubley (of Yo La Tengo, why not), and I named her Georgia.

I agonized a bit over finding the perfect visual references for highways in the film. At first I spent hours scrolling down desert highways on Google Maps, and eventually I set up my camera on a tripod in my car. One rainy day, I captured a horrible photo of the most beautiful overpass, just beyond an orange-lit tunnel. I had found the right inspiration, so I felt like I had permission to move forward.

The film was made at CalArts, can you tell us a bit your production methods – how long did it take to make, what tools/software did you use etc.?

The Experimental Animation MFA program at CalArts is geared towards helping students develop concepts, so a lot of time is spent sharing and debating before you will commit to work on your film.

My storyboards are especially funny to look at—I simplify them as much as possible because it really helps me feel like I have room to elaborate as I work. I only used Photoshop and After Effects, and the whole process from concept to completion took about 8 months.

How has your time at CalArts influenced your work?

CalArts is pretty remote, located in a desert suburb 45 minutes north of Los Angeles. I was lucky to have talented classmates and supportive professors, so I took advantage of the resources and spent most of my time on campus for 3 years. The environment was a bit isolating, but it gave me the space I needed to focus on CG and new media platforms.