Inspired by a scene in novel The Unbearable Lightness of Being, NYU Tisch graduate Nina Gofur discovered that the feelings of dissociation experienced by womxn in a world which controls and undermines them, as captured in her experimental short Phantasmagoria, troublingly echoed those she felt as a new female entrant into the male-dominated film industry. DN asked the NYC based director, cinematographer and photographer to guide us through the interplay of image and music behind the beauty laced horror of Phantasmagoria’s dual realities.

The concept came to me about two years ago while I was reading Milan Kundera’s novel The Unbearable Lightness of Being. The protagonist, Tereza, has a recurring nightmare that is triggered by her lover continuously cheating on her. In the dream Tereza finds herself marching around a pool with twenty other naked women. They are doing knee bends in unison while Tereza’s lover stands in the middle of the pool and kills them if they step out of formation. This image stuck with me because of its pure intensity. I was inspired to explore it through a visual as it reminded me of the feeling of entering into a male-dominated industry as a young female filmmaker.

While writing the script, I was also beginning my junior year at NYU’s Tisch School of the Arts. The idea of the film came to fruition during my Intermediate Experimental production class, and as I developed the script I had a strong sense of what I wanted the visual to be but wanted to make sure the audio component would complement it in the right way. My intention was to paint a portrait of a certain rapture that comes with long endured pain – horror laced with beauty and, ultimately, hope.

My starting point became a poem I had written about my mother, which ended up being in the film. This catapulted me into thinking about and talking to many womxn in my life, and it became clear to me that I wanted the narrative to be carried by a child. I wanted to challenge traditional story structure by creating two worlds – one a dystopian parallel universe and the other rooted in reality, hoping to capture the feeling of dissociation womxn can feel.

I knew that I wanted to work with non-actors, so we put out a casting call and just spoke to womxn about the ways they’ve felt marginalized. Everyone who responded was in the film.

As I developed the script I had a strong sense of what I wanted the visual to be but wanted to make sure the audio component would complement it in the right way.

My crew consisted of wonderful people that I had collaborated with on previous projects. My DP, Martin Blanco, and I crafted the shotlist meticulously. We wanted to establish a sterile world, so we could break it by shooting guerilla style when in Maya’s world. Our budget was small – about $1000 in total, so we leaned into working within our restrictions. We shot with the camera package supplied by NYU – a Canon C300 MK II and Zeiss lenses along with a Super 8 camera, and a few tungsten units for the bedroom scene. The warehouse space was shot by shaping natural light, done masterfully by our gaffer and my long time collaborator, Claire Halloran.

My art department and I developed a specific color palette to distinguish each scene. We used a lot of neutrals for the dystopian world and handmade every costume on location, tailoring to each woman. We wanted to keep the real world very simple and honest, aside from Maya’s bedroom. We built a huge nest from scratch for Maya’s bed and chose to cover that scene in Super 8 to contrast the pureness of the scene with its weight. 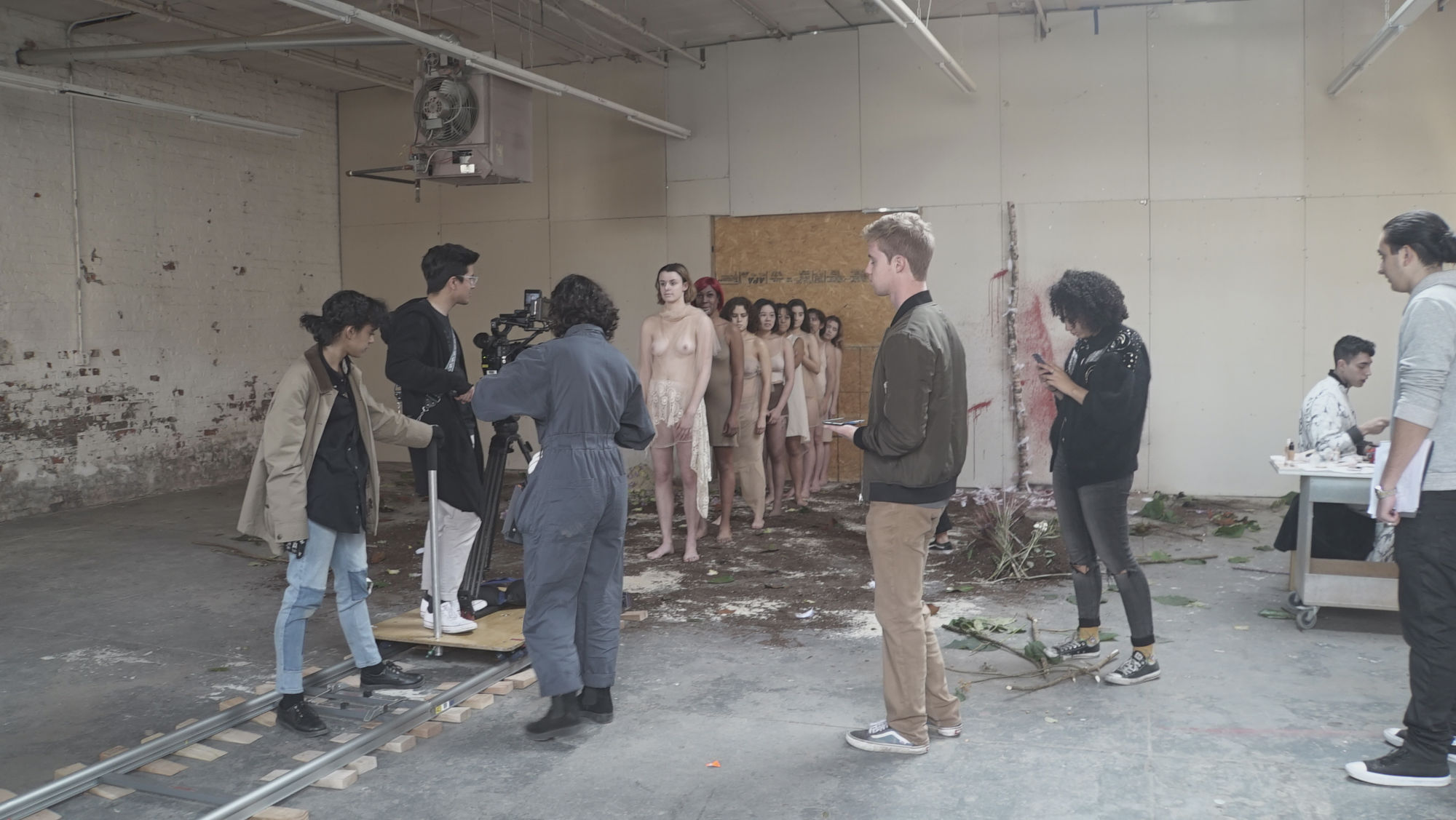 The shoot lasted two days and we managed to capture everything we needed to thanks to the amazing backbones of the project – Beatriz Costa (my producer) and Christian Ghosn (my assistant director.) I edited the short myself because I had such a clear vision of the film’s pacing. Once it was picture locked I knew that I wanted my partner Ben Shirken (Beshken), an incredibly talented musician to compose the score because I felt his masterful approach to craft lent itself to a keen sense of the mood I was portraying.

I’m extremely grateful for the people that worked on this project and the womxn who shared their stories with me. Endless thanks to Directors Notes for letting me share the process here.

Phantasmagoria is one of the many great projects shared with the Directors Notes Programmers through our submissions process. If you’d like to join them submit your film.