Posing the question, “can a love still exist with acceptance and letting go?” The Motions from Director Frank Donnangelo tells the story of an overworked and underslept paramedic who struggles to maintain the focus needed for her job when her terminally ill husband asks her to end his life. A film whose themes of helplessness, acceptance and the limits of love are potently resonant, Donnangelo joins us for The Motions’ online premiere and reveals how working with a continually evolving script infused the project with the potency of true emotion.

I think for me, the seed for this story stemmed from a conversation I had with a family member not wanting to go see their terminally ill mother in the hospital, because visiting would only confirm that reality for them, and rather than deal with those feelings of loss, it was easier to pretend it wasn’t happening. Now some might say, “Wow, what a terrible thing to do to their own mother?” and perhaps so, but I’d argue that was human to have that feeling. It made me reflect on the times in my life where I’ve chosen avoidance rather than confronting inevitable moments or decisions.

Whether it’s the, “We need to talk” conversation of an impending breakup or divorce, or even the news of losing a loved one, we often tend to deflect, ignore or even avoid the confrontation altogether, as if by not acknowledging the issue will make the issue go away. We will bury ourselves in our work, or in a bottle, or seek solace in another, whatever it may be, but in the end we’re just delaying the inevitable. Although terminal illness plays a part in this film, The Motions is very much a story about relationships, more specifically the end of a relationship, and asks the viewer if the one you love wants out, are you prepared to let go.

A larger understanding of the specific world I was diving into came from researching and interviewing paramedics in the LA area, not only to hear their stories about the job, the long hours, or the technical aspects but to also better understand the toll it has on them as a person and their close personal relationships. Although the central themes and elements of the story always remained the same, the script evolved over every aspect of production. From writing to casting to shooting to editing, you’re always either rewriting or refining the story.

We often tend to deflect, ignore or even avoid the confrontation altogether.

One example, while we were auditioning actors for our lead character Mara, everyone we were auditioning seemed to be hitting the same notes and cues from the sides we had given them – all waiting for their big moment to break down and cry during this emotional moment in the scene. Even though nothing in the sides said cry, they were hitting what they felt were the cues in the text rather than making the character personal to them, that is to say, “What do I think the director or casting director wants to see?”, rather than “What would I truthfully do if I were under these circumstances?”. And, understandably, it takes a tremendous amount of vulnerability to do that, let alone with strangers during an audition. 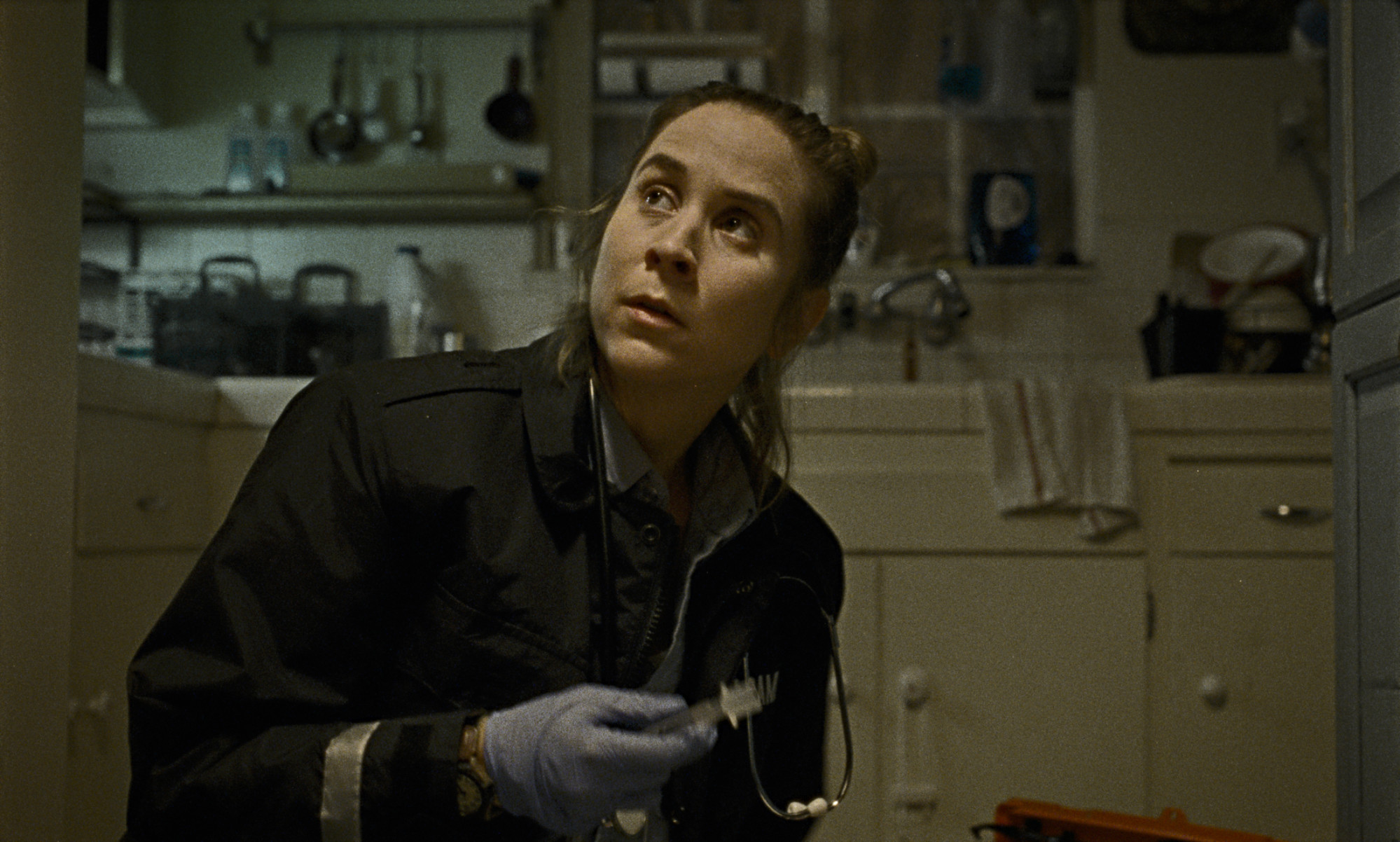 Then we saw Yaz Canli audition for us, and as the audition went on, there was this moment where she started hitting our casted Jonathan (Lane Compton) after he asks for her help in dying. She showed us a frustration and anger no other auditions had been willing to go to, and after casting her for the role, I went back and wrote that physicality into the scene because it seemed like such a raw and honest reaction to the request that was being made. After casting was completed, I worked with Yaz and Lane for a few days with rehearsals, exploring some of the more difficult scenes together, which I would then integrate into the script to further refine.

A note about Lane – he’s such an extraordinary actor who completely commits to his roles, not only in talent but in physicality if needed. In the limited time from being cast to principal photography, Lane dropped as much weight as he could for his role as an ailing husband, even sending me a picture of his diet – a post-it note that essentially consisted of lemon water, coffee, one avocado and one egg as his daily meal.

One of the fallbacks during production was creating a sense of rain and weather while shooting in sunny Los Angeles. We planned our shoot to happen in late winter because of the higher chance of grey clouds, and then made a DIY rain rig using a large amount of PVC piping and lawn sprinkler heads. During the shoot, we ended up placing those rain rigs above every window and entrance of every location we shot at. In the end, with the rain rig and constant wet downs from our art department, I think we pulled the look off fairly well for what we had at our disposal.

Overall, principal photography took about five days, mainly due to multiple locations spread out all over Los Angeles, with a day or two for miscellaneous pickups. My DP (Adam Leene) and I shot tests and ultimately chose to shoot on super 16mm because we felt that the format best suited the tone and gritty somberness of the story.

I do think there’s something special about shooting on film that you don’t inherently get digitally.

We shot on an Arri 416 with Zeiss Ultra 16s and an Arri Varicon system, on Kodak 7219 16mm film and ended up doing a one-stop pull in the development process from Fotokem LA. Perhaps I’m more of a Luddite when it comes to shooting format, but I do think there’s something special about shooting on film that you don’t inherently get digitally. In my experience, sets tend to have a more focused energy, with both cast and crew. There’s more at stake if there’s a mistake because all of a sudden you have this finite amount of media to shoot on. Mistakes can’t be deleted or reformatted on film.

I have a few feature scripts that I’ve been writing and developing for a while now, one of them called Weight Of Another; a lyrical adult-coming-of-age dramedy about two former lovers unexpectedly reconnecting in their old hometown as one reluctantly takes care of their ornery father with dementia while the other avoids dealing with an impending divorce. It’s a film that talks about recognizing the windows that have closed in our lives, and taking advantage of the ones that are still open. I also have a couple of short films lined up that I’m hoping to shoot this year, as well as outlining a television pilot.