rubberband. Share the Unique Process Behind Their Music Video for Lewis Del Mar’s ‘The Ceiling’ 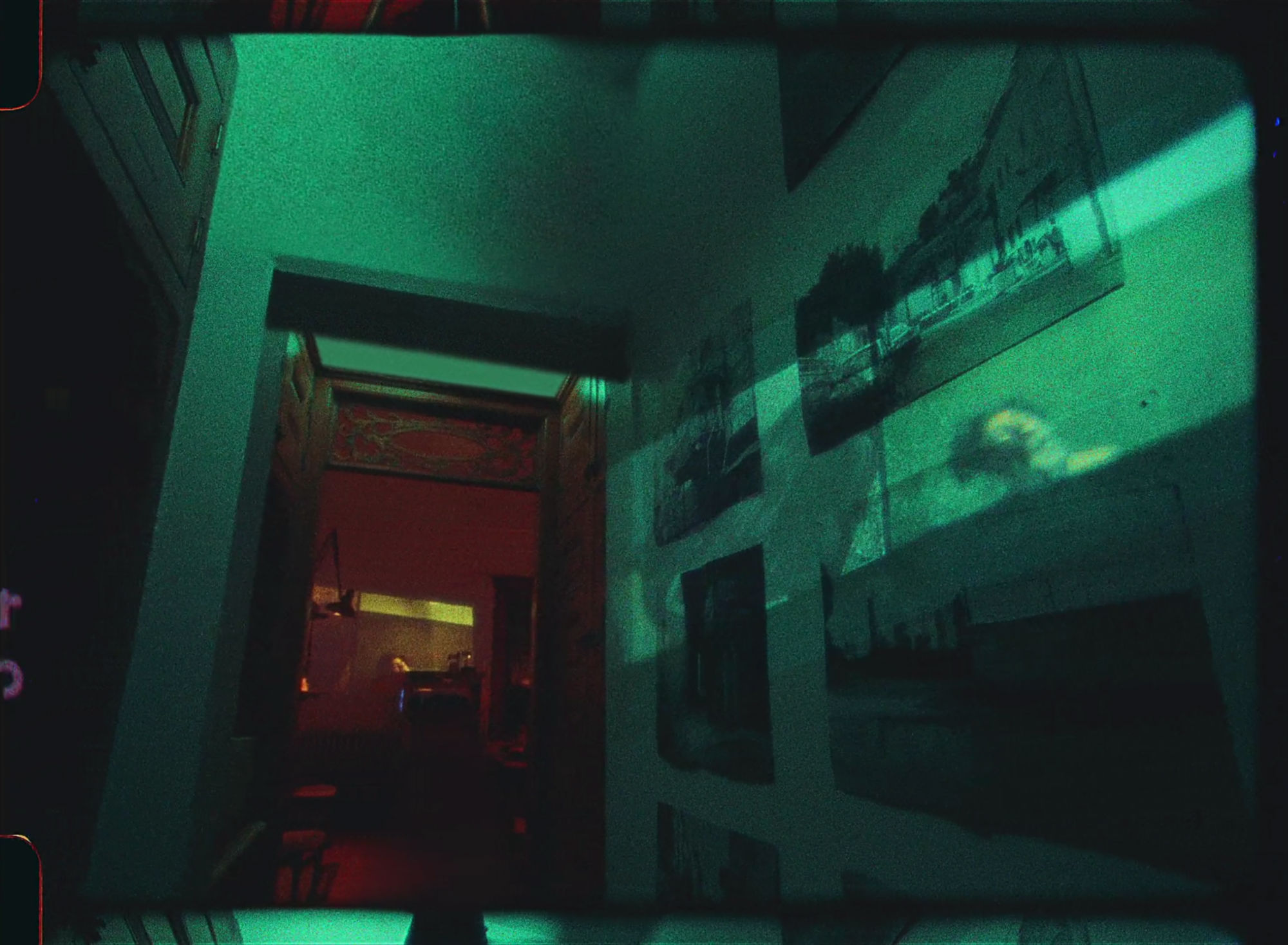 A dazzling experiment in light — whether it’s natural, indoor or through inkjet animation — rubberband.’s (last seen on DN here) music video for Lewis Del Mar’s The Ceiling is one of the most ambitious projects to come out of quarantine yet. Filmed over a 14-hour period, from sunset to sunrise to sunset again, it uses an epic tracking shot as a corollary to the array of feelings experienced during self-isolation. We talked to the duo, comprised of Jason Sondock and Simon Davis, about embracing limitations, using a Bolex film camera, and their future collaborations with the band.

How did your collaboration with the duo come about?

We met them for a music video named Painting (Masterpiece) about three or four years ago. It came to us like a normal video commission through a commissioner. We actually didn’t get the video and they went for another idea. Then the commissioner was like: “You guys should just have dinner with each other.” This is not a very common thing in the music video world, but it ended up being our philosophy that it’s way better to know the artist in that way before you ever make a video. We became collaborators and now Danny and Max are some of our closest friends. So when they asked us to creative direct their new album, it was something we’d never done before, but we were like: “Of course, let’s do it”.

I think it was one of the many instances in our life where we learned the value of embracing limitations.

The video is shot in a unique way. What was the rationale behind this choice?

We had no other way to do it given what’s going on in the world. The circumstances short-circuited our creative thinking because we couldn’t be in the same place, or work in crews and had limited resources. It just forced us to think about it in a completely new way, which engendered a relatively unique and interesting result. I think it was one of the many instances in our life where we learned the value of embracing limitations.

It seemed like a huge technical challenge. Can you walk me through the process?

We had five people on set, and the set was just Jason’s apartment, where we all slept on the floor. The video itself is a single take: what you see is one shot that goes over a 14-hour period, with the sun setting in the bedroom window and rising in the living room window. It’s kind of like a parallel to what everyone’s feeling with the days going by inside. We had a really tiny motion control rig that could fit inside a suitcase shipped to us, but we didn’t have any grips, so we had to build the whole track in the apartment by ourselves. The landlord was not very happy! 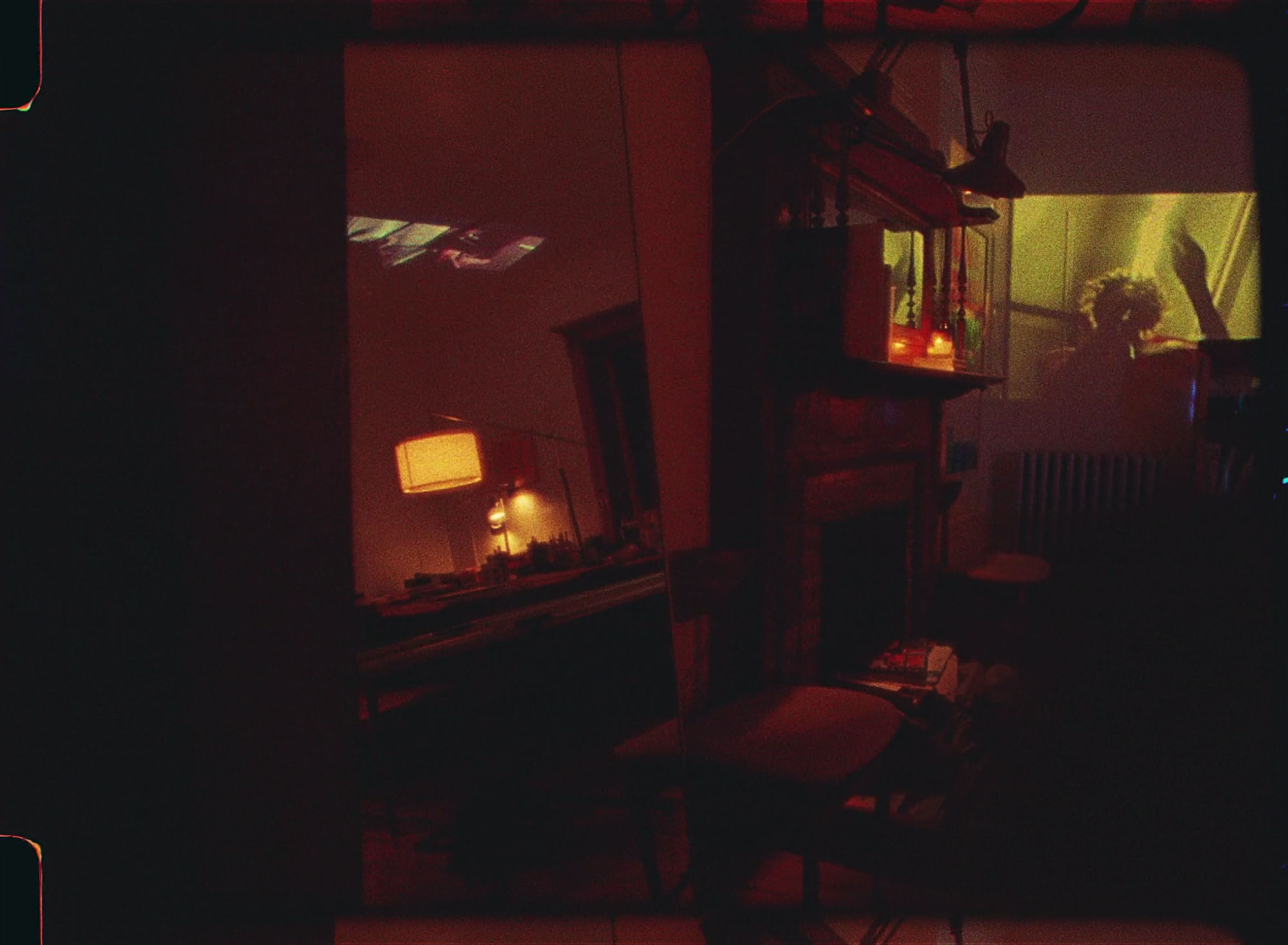 It was basically this weird marriage of analog and digital technology. It had to be shot on a Bolex because it was the only way to get long enough exposure over a period of time. We also had to wake up every couple of hours to make sure the intervalometer was working. We wanted two takes to have choices too, so we proceeded to stay up the next day and do it again. We ended up using the second take.

But if you imagine getting there Thursday at around six pm and leaving the apartment Monday at five pm, it was definitely loony hours once we got out of there.

What was it like trying to get the projections to sync up with the time-lapse photography?

All the credit has to go to Jason and our Cinematographer Patrick Golan. It’s kind of interesting as the Painting video was a very technical project which required pretty meticulous, mathematical precision. This, despite being more of an impressionistic, experimental thing, also required similar mathematical precision, so it came down to calculating a wide number of variables to get it to sync and to get the motion to feel right for the song. Jason had to make a blueprint for his apartment to see how long everything would take so we would know what the right exposure would be, and how long the camera would take to move between each individual frame. It was the most math we’ve ever done for a video before!

The idea was to create a literal living, breathing, three-dimensional collage.

Did you have to time it so you knew that it would be sunset in one window and by the time you arrived at the other window, the sun would be up?

Exactly. That was a huge factor on a conceptual level so you are watching a day go by in this take. We shot this in May and the days are quite long with about twelve or thirteen hours of daylight. So the take was around fifteen, sixteen hours to get that transition between full brightness and full night then full night into full brightness again. There was a lot of math and planning and staying awake. 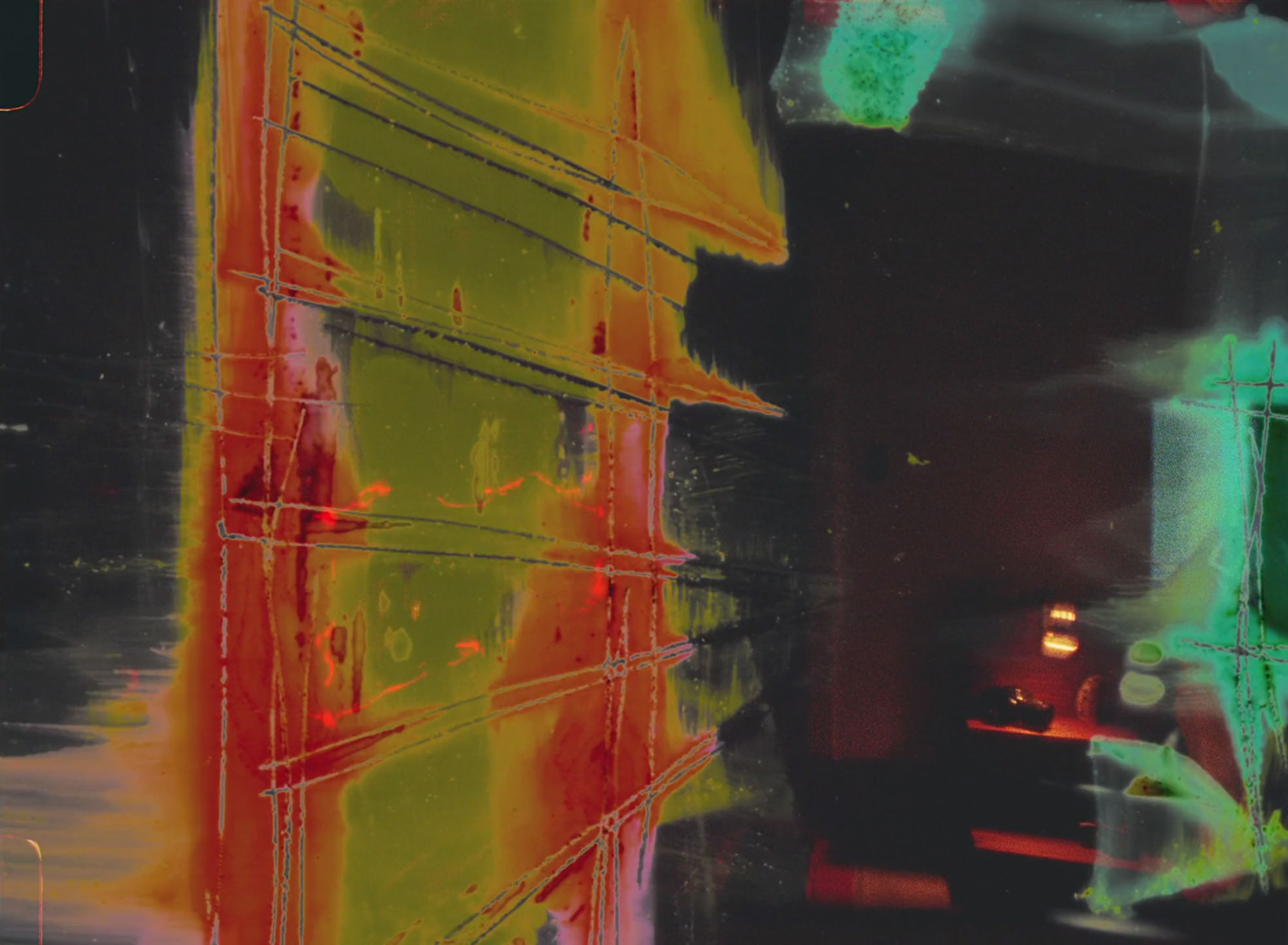 What was the idea behind the inkjet animations?

The thinking came from the beginning of the album. Danny and Max call it an audiovisual partnership: taking and finding coalescing, sonic elements that usually wouldn’t go well together and finding ways to collage them. The idea of collage was a key conceptual through-line from the album covers to the way we made their press photos. The idea was to create a literal living, breathing, three-dimensional collage, kind of representing the concept of this person being isolated and going insane. That was the impetus for the way we depicted them in the space; to have an unstable two-dimensional surface that could be torn apart, affected and transformed.

These experiences are things that people can’t hide from through distractions.

The lyrics themselves talk about having a hole in one’s life, and seems to be a commentary on the way relationships have been changed somewhat by quarantine. How did you want to reflect that in the music video?

It’s really hard to talk about that in any way that isn’t personal. It’s hard to speak in broad strokes about people’s individual relationships to these ideas of solitude and uncertainty. But the song is, in a certain way, about tapping into that classic, drug-induced anxiety or existential dread. Now, more than ever, these experiences are things that people can’t hide from through distractions. It was important to try and translate our experiential understanding of that process into visuals.

Additionally, even though this is made in quarantine, we wanted to do something that we can be as proud of aesthetically and emotionally as if we made it three or four years ago with four hundred other people. 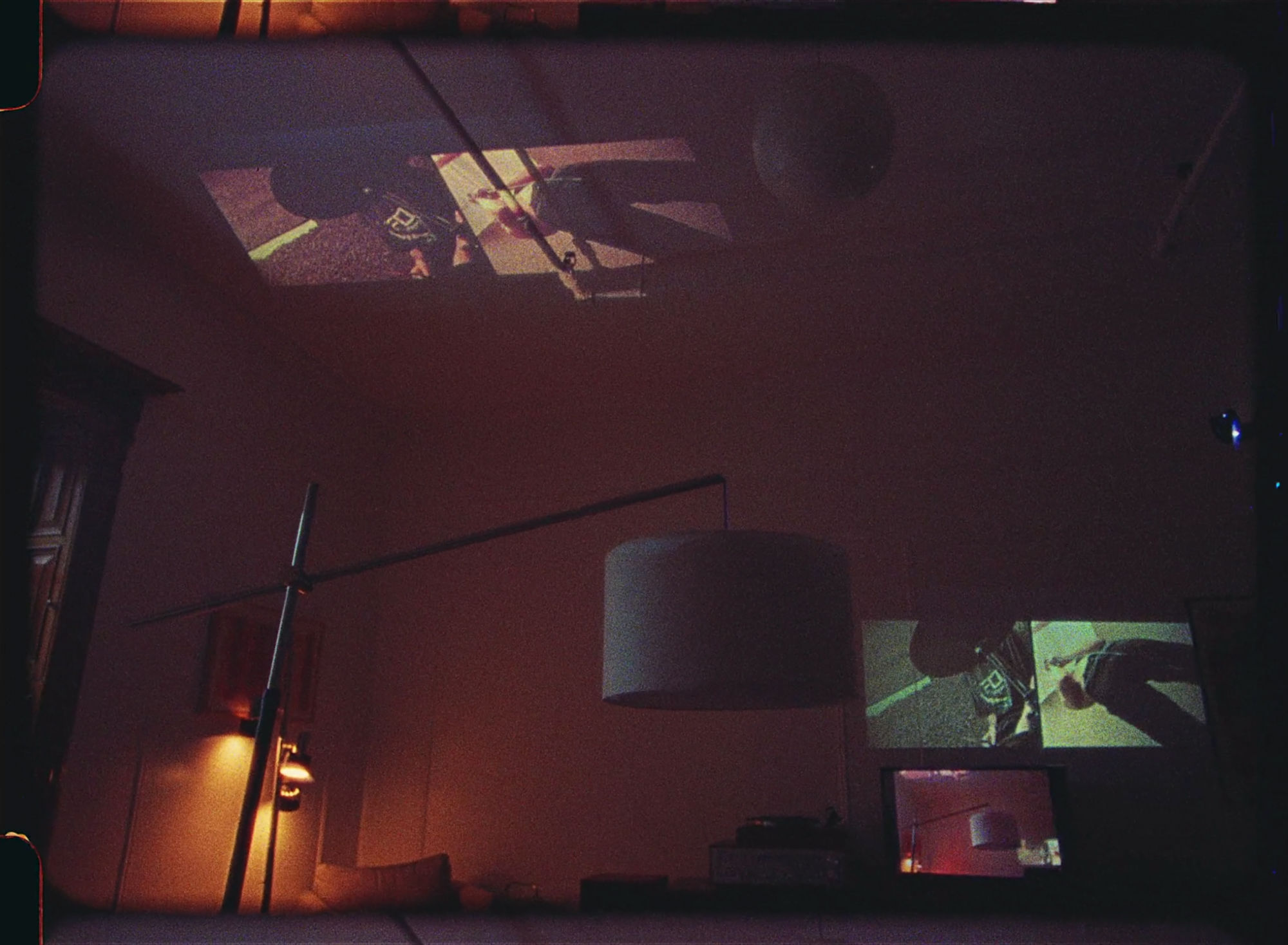 How many more videos are planned for the upcoming album?

We have one that is coming out and now we’re literally sitting at the edit bay as we’re taking this call, with a short film that is best described as a deconstruction of the album visually. It’s a far more non-linear and impressionistic kind of thing. Then we have one more video coming out which will be following the album once it’s released!