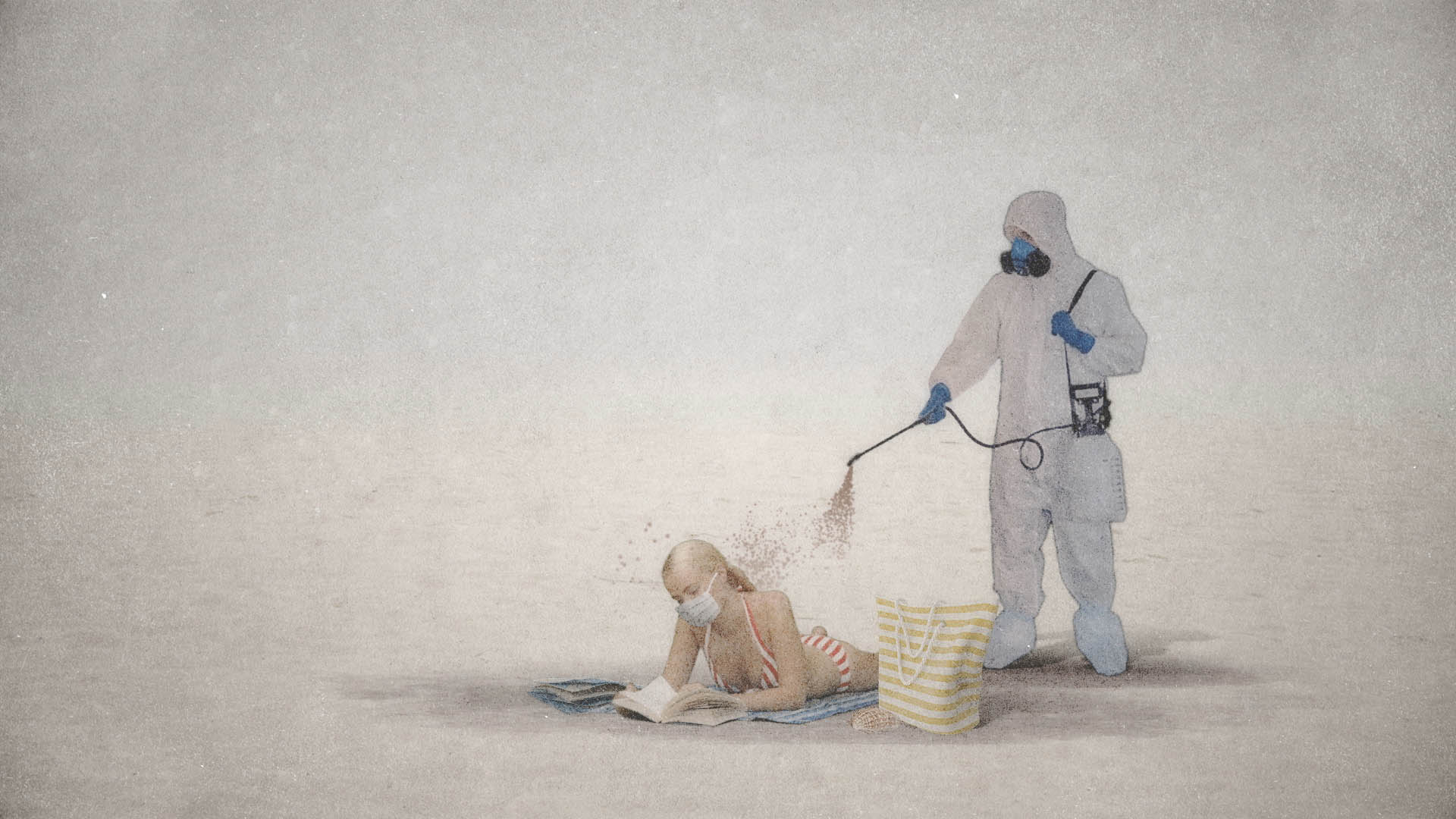 If a picture is worth a thousand words, then each frame in à la fin… speaks volumes about humanity’s self-inflicted and fast-approaching demise. Depicting a man with a face mask running on a treadmill whilst being doused in disinfectant, a couple with soulless rocks instead of heads snapping selfies, and two friends waving merrily at planet Earth engulfed in flames, Nicolas Lichtle’s conceptual animation delivers a stark snapshot of the year 2020 in all its cataclysmic glory. The 2.5min film combines an eclectic mix of techniques – frame by frame, 3D animation and digital photo cutouts – to achieve an ethereal and disturbingly surreal aesthetic with which the director illustrates society’s mindless obsessions and destructive behaviours, reducing the characters to one-dimensional icons of doom. We sat down with Lichtle to discuss his anxieties and fears, his experimental approach, sources of inspiration and plenty more.

à la fin… feels deeply personal, introspective and relevant. What inspired you to make it?

I started this film a year ago, with the initial idea of working on a succession of moments, small autonomous scenes with no relation to each other. I noticed very quickly that they reflected my anxieties and my questions about today’s world… A globalized world, in search of speed, performance and infinite growth. A world subject to climate disruptions (which are becoming more and more numerous), depressions linked to social networks and to all these screens that constantly solicit us, a world that isolates us from one another more and more each day. This feeling of isolation and loneliness has been exacerbated by the health crisis linked to COVID- 19. So I found a kind of outlet in this film to respond to my anxieties. Each scene offers several points of entry and can be interpreted in several ways so that each person can find a meaning, an interpretation or a questioning of his own.

I found a kind of outlet in this film to respond to my anxieties.

You have combined a mix of techniques to achieve a collage, graphic look that blurs the line between illustration and animation. Can you talk us through your process and what you were hoping to achieve?

Yes, I chose to combine several techniques in a rather strange and unorthodox way. I used green screen stock shots that I diverted according to my ideas and moods of the moment. I reworked each film with a classic frame by frame animation technique (to get closer to the aesthetics of an animated film in stop motion). Then there is a real transformation work in post-production with the addition of various 3D elements (with Cinema 4D and 3D Element in After Effects), frame-by-frame drawing and photographic cutting in Photoshop. Then comes a meticulous work of calibration (where I give a particular tint to each scene) and where I also add animated grain. So it’s really a mix of techniques that is close to a collage work. I progressed by successive trials and errors, combining my ideas and always looking for the thread that could link each of the scenes together.

The animation combines 1960s imagery with current issues we are faced with today. Why did you choose this particular decade for the illustrations?

The sixties were a time of euphoria, of an immense explosion of energy and excitement. We felt that everything was possible in contrast to the much darker 2000s. Today we live in a time conscious of its limits, more brutal and the questioning that we should engage in our ways of life. The contrast between the two eras is really strong, I like the softness of these faded ‘vintage’ images with their pastel tones and the brutal, more contemporary situations that are staged. It creates a kind of graphic and temporal confusion at the same time.

I already had very precise ideas about the atmospheres I wanted to let infuse in the film.

The sound design is extremely impactful and really adds to the dystopian vibe and the unsettling undercurrent that runs throughout the film. Was there a lot of experimentation and trial and error before you were happy with the final result?

Yes it wasn’t that simple. First I tried several pieces (in quite radically different styles) classical, electro, jazz, with always a strong preference for the piano. I always liked sad piano pieces 😉

Strangely it was more difficult to make a musical choice than to work on the sound-design because I already had very precise ideas about the atmospheres I wanted to let infuse in the film, the wind noise, the crackling of fires, the mechanical failures, electronic malfunctions, alarms (such as the SOS launched by the cosmonaut, or the fire alarm that can be heard in the scene inside the office). I also wanted to suggest a human presence with laughter and a lot of muffled ambient sounds.

I wanted the sound design work to bring the illustrations to life. I had to find the right balance between the volume of the ambient sounds and the musical range, I had to pay special attention to it because that’s when the magic happens or not. 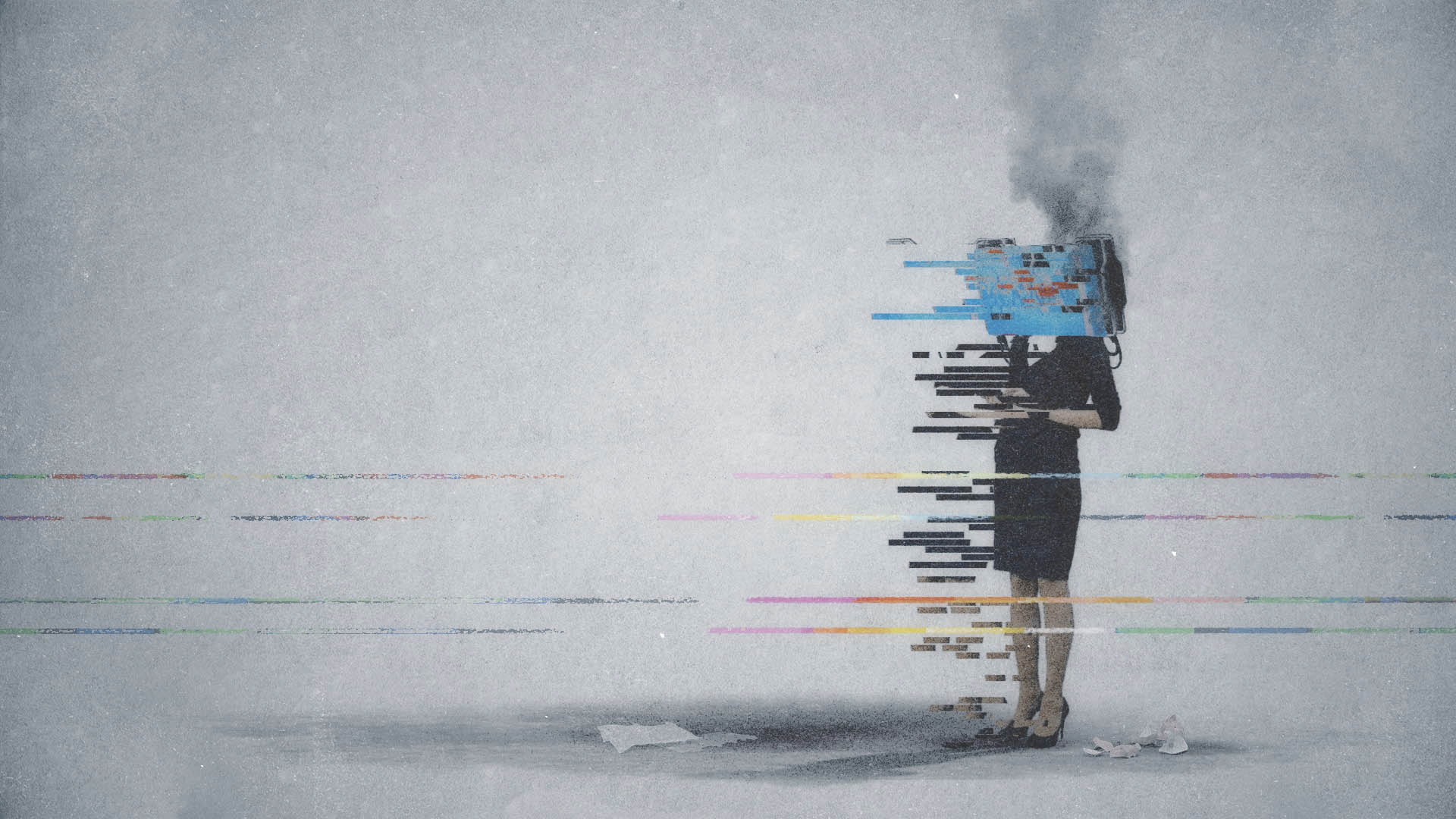 You wanted to make the entire short by yourself. Why was it important to do so and what were the biggest challenges you faced? Also, is the solo production method one you plan to repeat again?

Yes, I wanted to do it on my own because I always thought it was important to have a personal production outside of an ordered job. On a more professional level, we sometimes work as a team and we adapt things according to the wishes of the customers and the production and I have to admit that sometimes it’s really frustrating.

Working alone is very exciting, you feel very free even if sometimes you get lost along the way. The most difficult thing is to keep an objective and honest view, to take a step back from your own work. In this case I always ask my wife Beatrice and Antonin, my partner at the Mada-Mada studio, for their opinions. An outside opinion is always precious.

The themes the film traverses – conformism, vanity, consumerism and the destruction of our planet to name a few – evoke rather bleak emotions towards society and the world we live in. What are you hoping viewers will walk away with?

Today, each one of us is flooded with information and especially images every minute. At the time of writing these lines, we are still talking in France about the giant fires in California, when in my film I show two children burning and yet continuing to play quietly. I wonder about the inaction of men and governments in a time when we are seeing the first tangible effects of global warming. After the apocalyptic scenes of animals burning (during the bushfires in Australia), I inevitably wonder who will be next?

The issue of environmental preservation is the future of children, their voices must be heard in discussions, decisions and solutions. I’m talking about this scene but each of them (there are thirty in the film) is intended to provoke reflection on the state of the world (at the present time) and is open to everyone’s interpretation. I have the feeling that several paths can be taken.

I wonder about the inaction of men and governments in a time when we are seeing the first tangible effects of global warming.

Were you influenced by the work of another filmmaker or any specific piece of film/literature/art?

I like all the collage work of the Dadaists of the early 1920s, especially the collages of Hannah Höch and Raoul Hausmann, but also the work of more contemporary artists like Joe Webb (which I find admirable) or that of Terry Ringler, aka Trash Riot.

I am also very inspired by science fiction literature and the great dystopian works from Philip K Dick and Margaret Atwood. Margaret Atwood’s MaddAddam Trilogy is truly prescient and relevant. It has incontestably changed the way I see the world after reading it.

I would like to continue and extend this experience, but this time without working on a succession of scenes, but rather based on a narrative structure. In the meantime, I have to finish a teaser for the new presentation of the collection of the Musée de l’Orangerie in Paris.

à la fin… is one of the many great projects shared with the Directors Notes Programmers through our submissions process. If you’d like to join them submit your film.