I first saw Backbone Films directors Andrew Butler and James Wilson’s short film Keratin at Encounters in September. It was a film that stuck with me through its bleak and cold atmosphere that was palpably realised through distinctive cinematography. Butler and Wilson’s story follows a man who enacts a strange magical ritual. The directors refrain from clear explanation, allowing the viewer to place their own interpretation onto the isolated man’s process. The result of which is a mysterious blend of folklore and realism. DN is proud to present the premiere of Keratin, and spoke with Butler and Wilson about their influences and the mental and physical challenges of shooting in a nightmarish forest.

Where did the idea for Keratin come from? I really enjoyed the mixture of folklorish elements and the realism. Did you draw from any particular sources when developing the idea?

The original concept was inspired by a short online cartoon we saw which we developed further, drawing on our love for dystopian stories and imagery. We are both great admirers of films such as The Witch, The Lighthouse and The Road and you can really see how these films influenced us in terms of creating a cold, lonely atmosphere through a muted earthy palette, score and pacing. In these films the world in which they are set is one of the major characters, we wanted the Keratin world to feel timeless and placeless, but also distinctively unsettling. Establishing an atmosphere through the set design and location was one of the most important parts of the process. Production Designer Laura Little did an amazing job with the caravan, creating this lonely, isolated world that feels very much like a protagonist within itself.

How did you work with Jason Thorpe on creating his character?

Due to an eleventh-hour withdrawal of our original lead, Jason was a very late addition to the film. There were a few awful days where we were without a lead and hurtling towards the scheduled shoot days. There was tangible relief when our Producer Laurie Mahon called 36 hours before the shoot to tell us he had managed to get Jason on board. To get an actor of such high calibre and experience on board at such late notice was incredible and testament to Laurie’s hard work, charm and persistence.

With so little time to prepare with Jason, we had to trust that our vision and our script was clear. Fortunately, as soon as we chatted to Jason it was clear that he was very much on the same page as us, and we knew we were in good hands. From the moment he came on set and saw the world we had created, he lived in that world. We wanted to give Jason the freedom to experiment and explore, an approach which found a lot of subtle moments that we may not have discovered had we been too prescriptive and precise in our directing. Jason was a joy to work with and made our life easy, and we can’t see anyone else in the role now. The initial setback proved to be a real blessing. 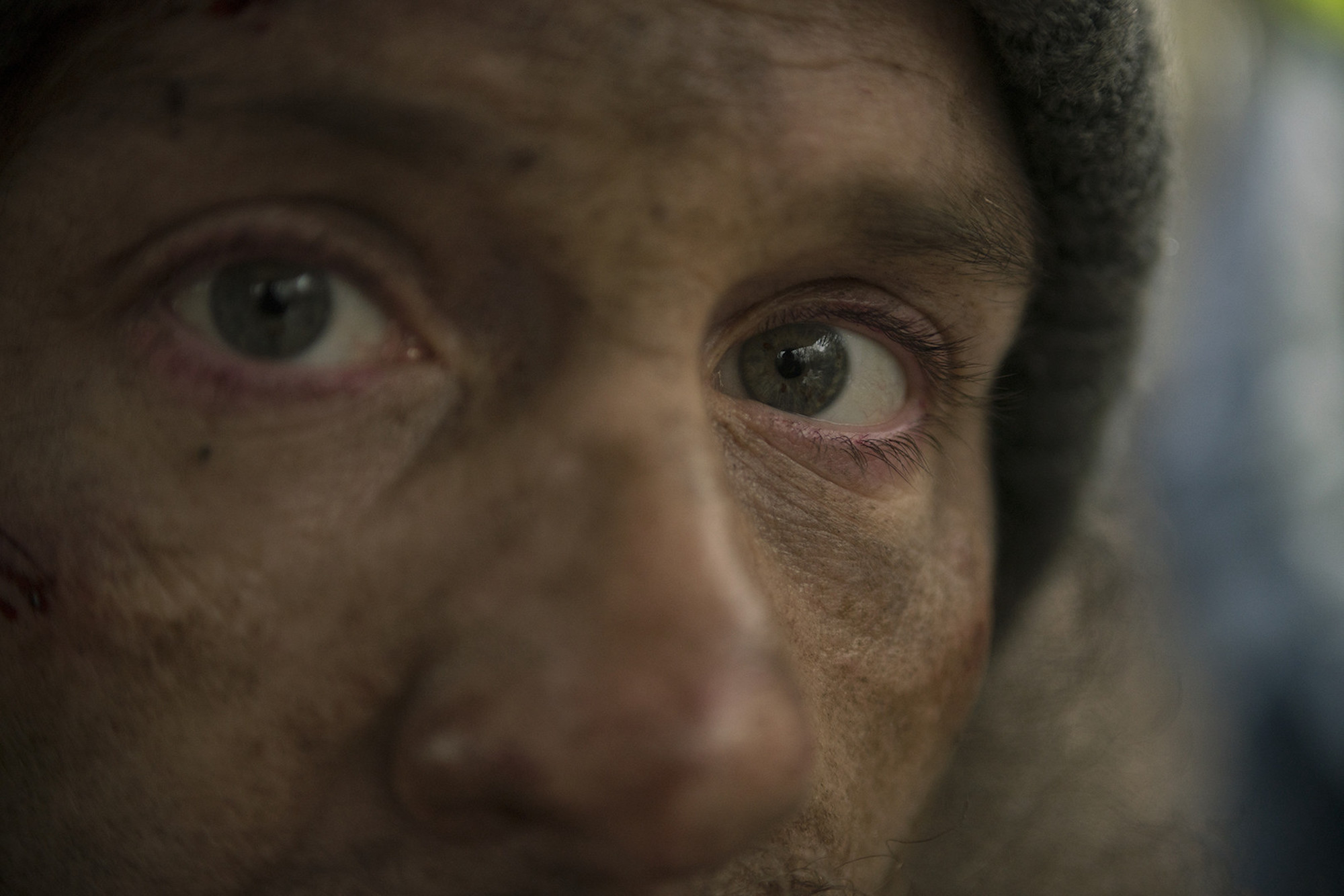 How was production? The location feels almost nightmarish.

When we brought Laurie on board we had originally planned on filming in April/May, but he encouraged us to bring the production dates forward and strike whilst the iron was hot. Cut to freezing temperatures and lashing rain in early March when we started shooting Keratin in a small wood in Surrey that belongs to our long-time collaborator and friend Alex Marshall, who edited and graded Keratin. Logistically and financially, this was a huge help to production. The caravan was found on Facebook marketplace, and we had it transported from an underground car park in Sutton to its new woodland home in Surrey. The last 30 metres of the journey took four hours to drag it into position through boggy woodland!

We wanted the Keratin world to feel timeless and placeless, but also distinctively unsettling.

In hindsight, filming later than March would have been impossible because of the pandemic, but more importantly, the film would have lacked its stark isolated tone had we filmed it in springtime. We have to say a huge thank you to our amazing crew, their hard work and professionalism allowed us to complete this film to an incredible standard in really testing conditions, both mentally and physically. Everyone was soaked to the skin and freezing cold, but all pulled in the same direction, we even wrapped early on the second day. As a low budget, self-funded short, it’s really held its own in festivals against more well resourced films, which we’re incredibly proud of and hope the crew are too. 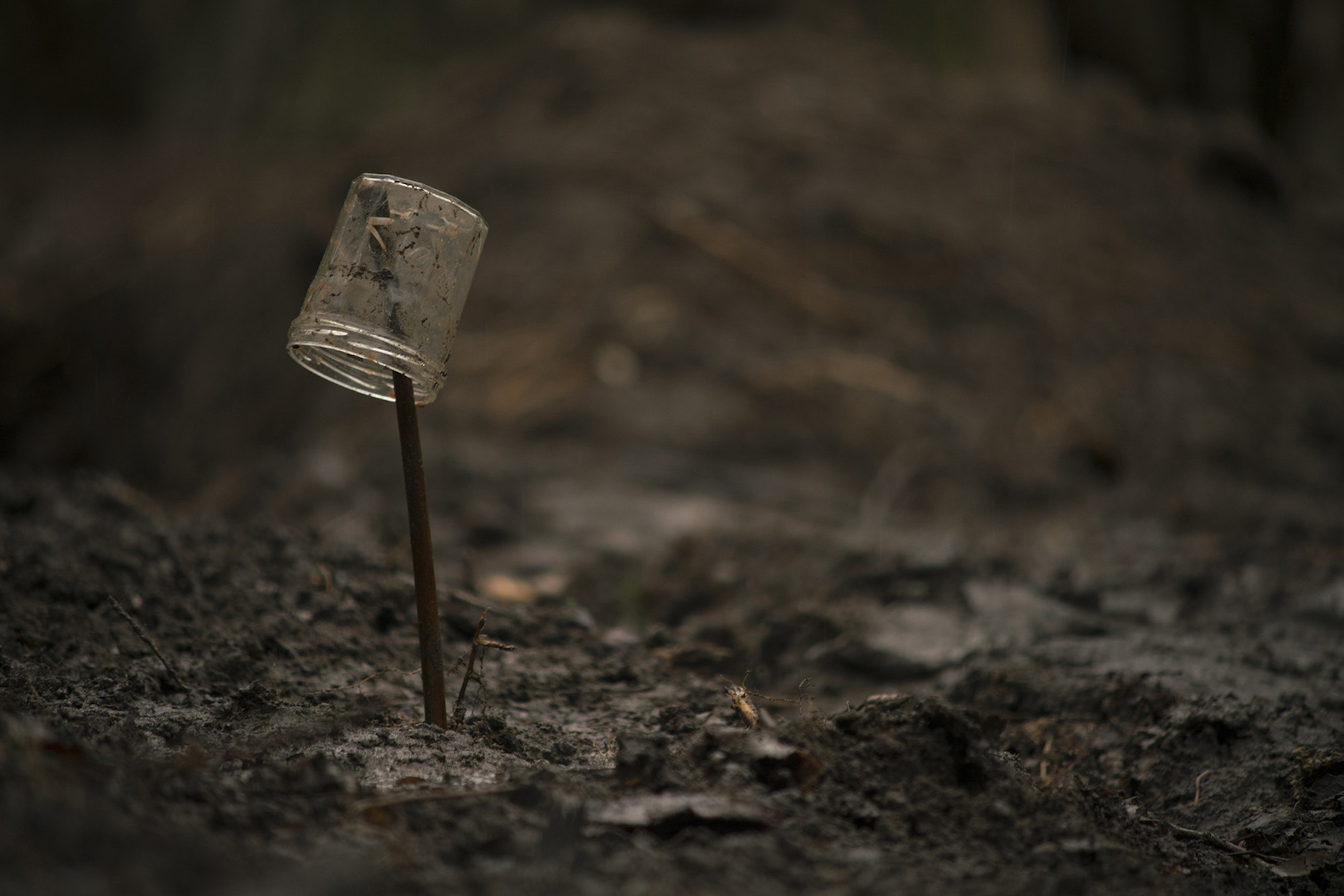 What kit did you utilise to create that that bleak visual atmosphere?

When it came to kit choices, something we had always discussed when planning the aesthetics of the film was shooting on anamorphic lenses. The imperfections and lower contrast that anamorphic lenses render felt perfect for the grainy, desaturated look we had in mind. The beautiful oval bokeh that anamorphic lenses produce also lends itself perfectly for the forest setting, and really helped the location feel denser and deeper than it was.

Ultimately, we didn’t get too bogged down in kit choices. We focused the majority of the budget production design, accommodation/food and crew costs, and then worked out from there what kit we could afford. We ended up using some Atlas Anamorphics supplied by a friend, as well as a Blackmagic URSA mini pro G1 that we managed to source for free. We kept lighting to a minimum, as the location was a ten minute walk from the nearest power source and a generator to power HMI’s was out of the question due to cost and location restraints. We relied heavily on natural lighting that we shaped with bounce, diff and neg, supplemented with some battery powered lighting that included a couple of Litemats, Astera tubes and an Aputure 120D. Both days were overcast, so we had lighting continuity for both days. The day after we wrapped it was full blazing sunshine for about a week, so we squeezed it in just in time.

The score feels really bleak and vast, who did you work with on it, and what did your conversations look like?

Having again lost a member of the team at short notice, we were lucky enough to collaborate with someone whose immense talent and skill completely elevated the film. The moment we reached out to James Warburton; we knew we wanted to work with him. After the initial conversations, he totally understood the film, the dark sinister tone and how important a natural score would be to complimenting the eerie atmosphere we had built through the writing and filming process.

James captured organic sounds from the trees, branches and rivers of his local forest; stretching and distorting them through old tape decks to create a sense of the forest “breathing.” We quickly felt we both trusted James implicitly and allowed him the creative freedom to find the film’s voice and elevate the tone. All of our conversations with James were conducted over Zoom due to the pandemic and we still haven’t met him in person yet, we can’t wait to buy him a beer and have a proper chat when all this blows over. 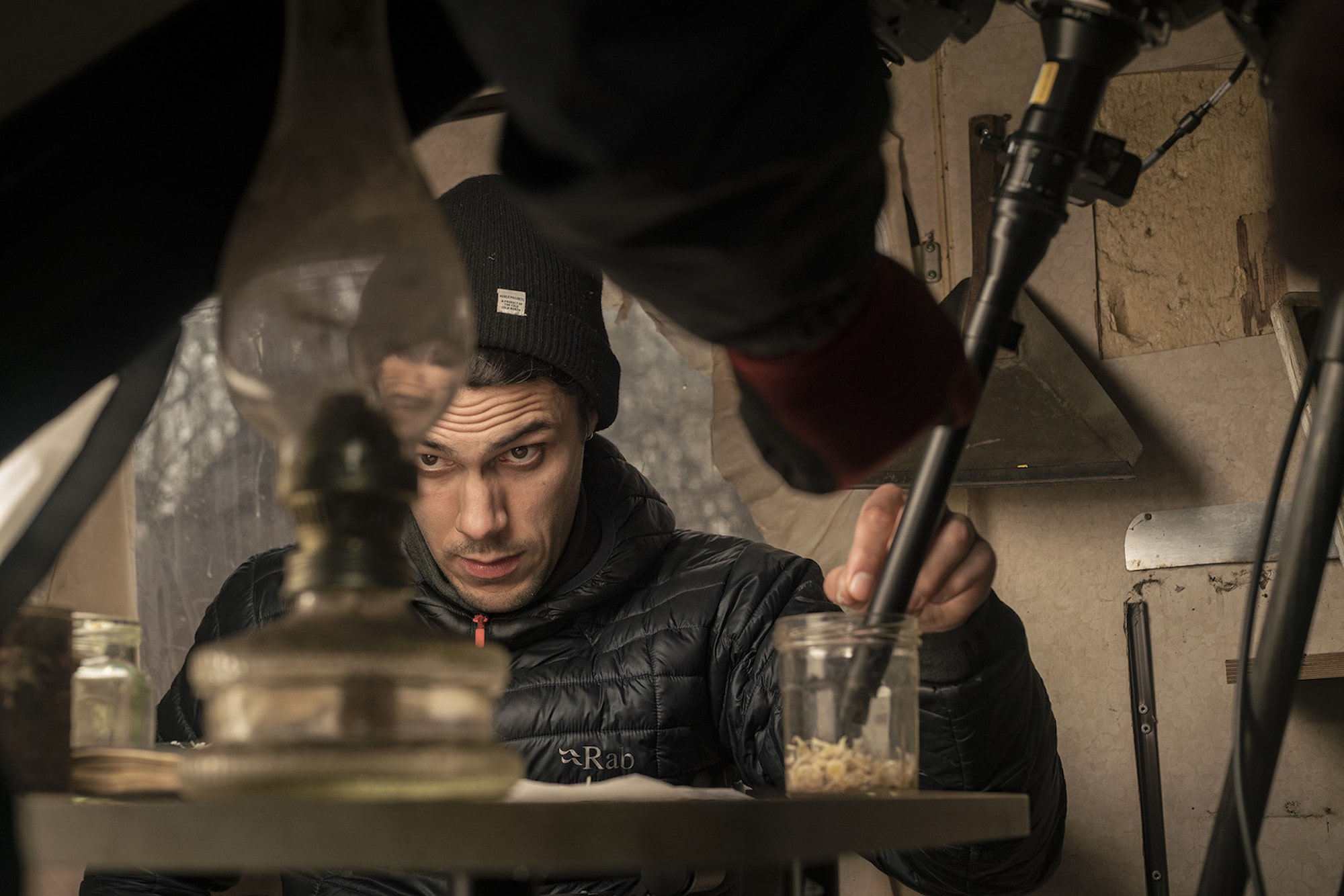 Are either of you working on anything new at the present moment?

Like so many others we have just been trying to stay afloat and stay positive through 2020. It has been a good opportunity to focus on writing, something we have both enjoyed doing this year. We have finished scripting some exciting narrative projects that we are hoping to link up with producers in early 2021.

Directors Notes is honoured to present the premiere of Keratin on our pages today. If you would like to join the filmmakers sporting a fetching DN Premiere Laurel, submit your film now.