One of the great things about art, whatever the medium, is the cathartic effect it can have on its creator. Through art, confusing emotions, which might have been impossible to process without it, can be explored. For Na Kyung Kim, she was at an early point in her animation career and feeling a little insignificant surrounded by “all the talented people in an unfamiliar environment”. With her self-esteem dwindling, she decided to take action and turned to her art to create short film Just a Small (and a giant painting titled Dot to Dot).  The story of a small eel wishing to become something greater than itself, we spoke to the filmmaker about how her animation reflects her personal feelings at the time and why she decided to create a film about such a small creature, in such a grand scale.

It may feel like an obvious place to start, but I’m interested in the title for your film – Just a Small – it feels an unusual choice for a film created in such large proportions, can you explain the title and how it relates to your storyline?

Though you mentioned it is an obvious place to start, not many people have asked me about it, and I’m glad you asked. Just a Small is a story about an eel that grew out from a tiny dot. Compared to the size of the painting and the scope of the plot, a 2cm-eel is just too menial. I liked the contradiction the title suggests and its attention to what nothing but just a small eel/dot can do.

You describe your narrative as a story of a small eel wishing to become something greater than itself, what message do you hope a viewer leaves the film with?

The film is about overcoming one’s limitations.

The animation itself reads as a small protagonist ruining one’s path due to its greed. One could understand the message as you are what you are born to be, and regardless of whatever you do, you can’t change who you are. This was the thought I had in my mind when I was in production for Just a Small.

The struggle left me something, in contrast to the eel, whose journey left nothing but self-destruction.

It was the first year of my master’s program, as well as the beginning of my career as an animator. I felt so small being surrounded by all the talented people in an unfamiliar environment. The boundary I set for myself was eating up my self-esteem, and I had to prove that I am better than who I think I am. As a result, I ended up with animation, Just a Small, in one hand and a giant painting, Dot to Dot, in the other. Did it prove what I wanted to see? I can’t say now I’ve become a better version of myself. I can only say the struggle left me something, in contrast to the eel, whose journey left nothing but self-destruction.

As I alluded to earlier, the film was created on 6 large 30 x 40-inch paintings. What is it about this approach to filmmaking that appeals to you?

It was my strategy to differentiate my project from others by bringing in what I am already familiar with. But the main reason for this approach, the replacement animation, was to have a giant painting at the end of the production. I guess the answer to this question is a continuation of the previous question. To film this animation, I knew that I needed to paint a vast canvas filled with all the frames. I thought if I make something so big, I could somehow prove myself.

The uncertainty was more like a surprise gift rather than a burden.

Also, as an illustrator who uses watercolor and ink, with many details and patterns to fill up empty spaces, the plan made more sense than any other animation techniques. During the course of testing how my drawing style could work with the technique, I realized I could not control how the surroundings of the focal point would present. I could only guess how it would look while filming my drawings. However, the uncertainty was more like a surprise gift rather than a burden. It brought more life to the image and suggested a certain mood. To an animator who just began the practice, I learned that leaving some part of the image to naturally occur, relieved some stress off my hand. 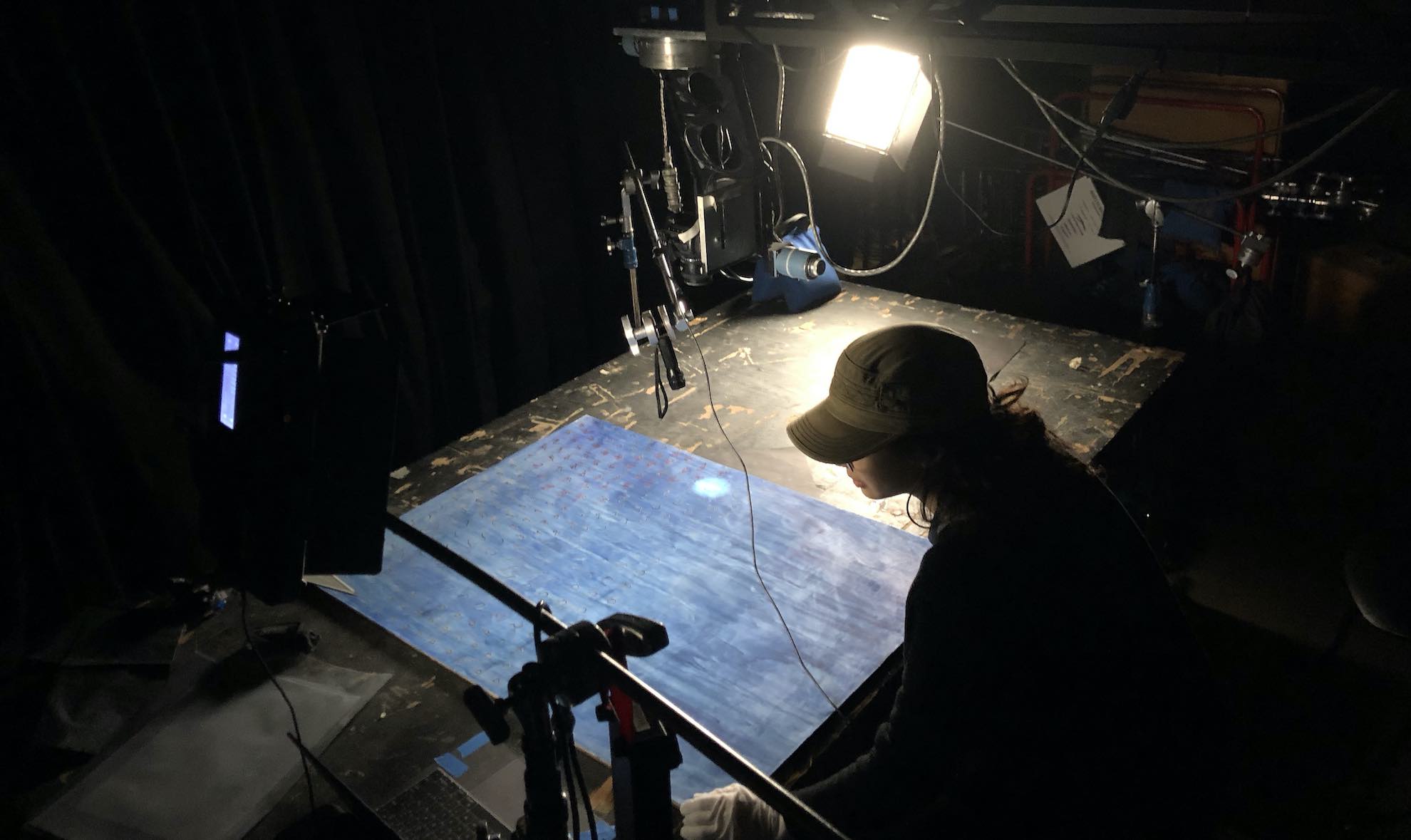 Can you give us a little insight into the process of turning the paintings into an animation, how did that work and how much planning did it take?

Yes, there was a lot of foolproof planning, but now that I am in the production of another animation, replacement animation was more straightforward, sometimes simple. It just required a lot of planning, with guidelines, until I finished the painting.

First, I animated the whole sequence in TVPaint. Then during the course of two days, I numbered all the 1670 frames so that I know in which order I should shoot the drawings under the camera. I clearly remember how long it took me, as I wasn’t expecting to be writing numbers for two days.

Looking back, the painting period feels like a blue blur.

When the frames were ready, I exported all of them in png format and imported them into Adobe Illustrator to design the tapestry. Bringing in 20 frames at a time, placing all the images in six 40 x 30″ artboards took about a week.

While battling the heavy-loaded Illustrator file to export in twelve different pieces, the actual canvas was colored in blue acrylic wash. Then, using a highly defined projector, I projected the twelve parts of the tapestry and traced the images with pencil and ink. Looking back, the painting period feels like a blue blur.

After finishing the painting, things were comparably quite simple. Following the numbers I wrote, I shot the images with the camera, using the Motion Control system as a giant down shooter.

The film has a wonderful rhythm to it, almost hypnotic, was that something you aimed for from the start or something that happened more organically?

The hypnotic rhythm happened organically. I guess the nature of the technique, having a focus point at the center with the rest a random array of images, heightened the hypnotic vibe. As I elaborated above, I could not plan how some parts of the frames would present. The only thing I knew, is that if I arranged images in a circular format, the background would have a circular movement around the focal point.

Years of watching movies I favor has affected the rhythm of my animation.

I’ve been thinking about the rhythm of animation recently. Especially as I started working on my next film. I realized the breadth of my animation is a little more laid back than other animated shorts. I’ve been a big fan of independent movies that are slow and detailed in delivering emotional changes. Years of watching movies I favor has affected the rhythm of my animation, and it became something that naturally manifests in my works.

Sounds play an important role in the atmosphere and tone of the short, how did you approach the sound design, and what do you feel it adds to the piece?

Just a Small entails a number of loops and repetition. The film itself can be a big loop starting from a dot and ending with another dot. When designing Dot to Dot (the painting) in Adobe Illustrator, I tried to place images in circular forms, and I wanted to continue the same approach with the sound. I decided to have sound repeatedly playing throughout the film to represent the heartbeat of the eel. It was a sound I recorded from a half-filled vacuum flask. The sound’s reverberant tail reminded people of spiritual bells or submarine radar, giving them some sense of hypnotic relaxation.

What are you working on next? Any upcoming projects we should know about?

I am currently working on my thesis film. It is a coming of age story about a daughter and her relationship with her mom. Due to its content, I am taking a more classical 2D narrative approach than Just a Small. There are a number of new things I am trying with the project, so I am excited and worried about what the outcome will be. However, the challenge is inspiring and it has been a good experience. I hope to present it to you soon 🙂

Directors Notes is honoured to present the premiere of Just a Small on our pages today. If you would like to join the filmmakers sporting a fetching DN Premiere Laurel, submit your film now.