Throughout history cultures have told tales of magnificent beings whose power and influence have become legend. These stories are able to move across generations long after they were first told and can create the fabric of societies and their history. After six long years of research and two years of concept and script development, co-directors/writers Hinaleimoana Wong-Kalu, Dean Hamer and Joe Wilson have produced the visually arresting Kapaemahu, a film which reveals the healing powers of four mysterious stones on Waikiki beach. A story which has long lain hidden from outsiders, the trio’s portrayal of the legendary male and female spirits who imbued the giant boulders with their powers features vividly stunning animation from Directors Notes alum Daniel Sousa. DN jumped at the opportunity to speak to Wong-Kalu about her personal ties to the tale, honouring the legacy of the stones and why she feels it is of utmost importance to show this Oscar shortlisted story to the world.

Firstly, how does it feel to be the first Hawaiian animated short to be on the official Oscars shortlist?

My aim in every project is to lift up our people, culture and language, so to have Kapaemahu recognized on a world stage such as the Academy Awards is exciting not just for me but for Kanaka everywhere. I’m beyond grateful to be part of a team that has helped bring this dream to life.

Apart from the original handwritten manuscript you discovered in the University of Hawaii archive and your personal relations to the story, how did you develop the script?

Initially, we thought we might elaborate on the manuscript with additional characters or plot twists, perhaps even make it into a feature. However as our research uncovered all the ways in which the story had been censored and suppressed over the years, we realized that it was even more important to write a script that reflected the original intent of the tellers. I wanted to echo the voices of my ancestors, not drown them out with my own opinions. One complication is that Hawaiian tends to be an effusive language, which doesn’t easily match the more condensed style of animation. While it was a struggle, I feel we found the right balance.

I wanted to echo the voices of my ancestors, not drown them out with my own opinions.

How did you go about defining the scope of the characters and their abilities in the animation?

Because the original moolelo gives only scant information about the four main characters, I had to infer their healing skills and practices from an interpretation of their names. For example, the name Kahaloa can be broken down as Ka – the; ha – breath, which is the source of life; and loa – at a distance. From this we infer that Kahaloa was capable of healing from afar. We did the same for each of the characters based on the meaning of their names and imagined visuals that conveyed their healing powers. Once the healers transfer their mana to the boulders, it is the stones themselves that become the main characters. Some western viewers, and curators, have difficulty understanding this, but it’s deeply tied to our belief system. 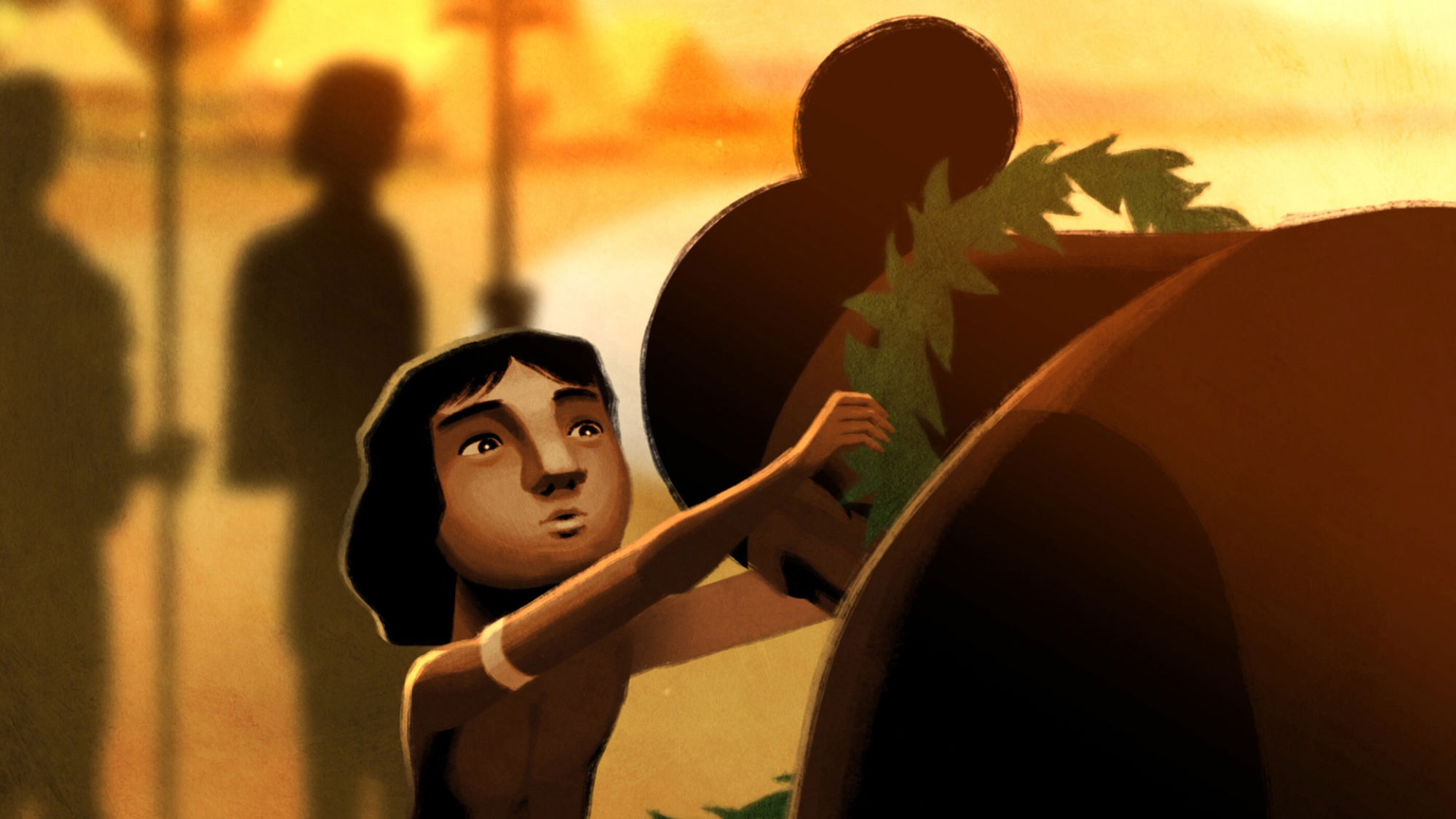 Why did you choose to tell the tale from a child’s point of view?

Although we did not change the substance of the story, we did alter the point of view by introducing a young person who first appears as an onlooker when the healers arrive, and then a century later as a modern-day Hawaiian child who is drawn to the stones by the force of their spiritual power. We did this to humanize the story – to make it more than a dry piece of history – and to emphasize that it is only by teaching our youth that we can preserve our past. Hawaiians don’t really distinguish ‘children’s’ versus ‘adult’ stories, but we’re delighted that Kapaemahu has resonated with young audiences.

Please can you give us more detail about the advantages to using animation over other filmmaking forms for Kapaemahu?

Although I’m relatively new to animation, I really can’t imagine telling this story any other way because of its unique suitability for combining the realistic with the fantastic. For example, consider how to show the concept of mahu as “a mixture of both male and female in mind, heart and spirit.” Simply spoken, those words are difficult to conceptualize, especially for those who occupy one side or another of the gender binary. But combine that text with the moving image of a male and a female dissolving into strands which then intertwine in a new being and “voila” – you have a picture that anyone can understand.

You’ve spoken about the importance of the story being told from your perspective, how did you build your team to keep true to that intention?

I wouldn’t entrust this story to just any filmmaker, no matter how acclaimed or credentialed they might be. But I’ve known my co-directors and producers Joe Wilson and Dean Hamer for over ten years now. In fact, I entrusted them with my own life story, which became the PBS Independent Lens documentary Kumu Hina. So, over these many years and other projects, we’ve built a high level of faith and confidence in one another by working as a hui – a group with overlapping kuleana or responsibilities, and the expectation that we always work together to produce and to advocate for our work.

Simply spoken, those words are difficult to conceptualize, especially for those who occupy one side or another of the gender binary.

I met our animation director Daniel Sousa more recently. His earlier films, such as the Oscar-nominated short Feral, captured my attention. And as soon as I saw his first sketches for the Kapaemahu characters, I knew he’d be a good match. When he told me he was drawing the mahu as such large figures to represent the power of their mana, rather than their physical size, I knew I could trust him. 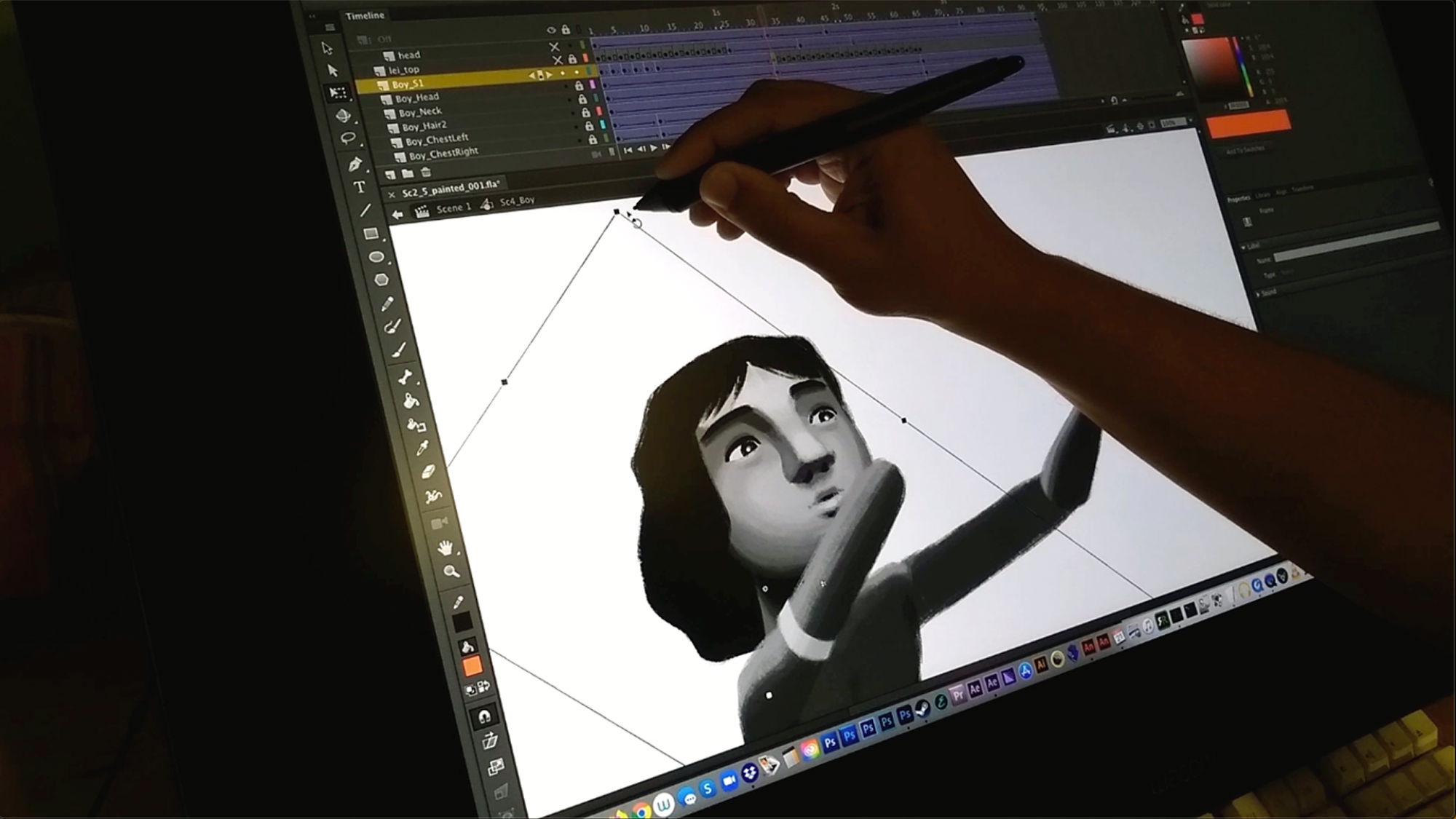 Kapaemahu’s colour palette brings the film’s vivid tone to life. Please tell us about the process involved to capture the right notes?

Because Hawaii has such a vibrant landscape, it’s often depicted in films (including our own), in super-saturated, technicolor palettes emphasizing blues and greens. But for Kapaemahu, we started with Polynesia’s most important art forms, tapa cloth and lauhala weaving, which led to a more earthy palette with rough textures and geometric forms. The breakthrough came when Daniel painted the style frames for the sunset scene on the beach where the healers send the people to the mountains to gather the memorial stones. When we saw those rich orange and yellow colors, we realized that sunset was the perfect metaphor for the entire film and its theme of bridging the divide between day and night, light and darkness.

Sunset was the perfect metaphor for the entire film.

The soundtrack works as a beautiful compliment to the Ōlelo Niʻihau dialect, what guided its design?

We knew that we wanted lots of natural sounds, so Dean and Joe, who live on the north shore of Oahu far from busy Honolulu, spent a lot of time recording foley of wind and waves and palm trees on the beach there. This was expertly incorporated into the sound design and music background provided by Dan Golden, who has worked with Daniel Sousa on many previous films. We also wanted a chant as the central element of the ceremony scene and were very fortunate that Kauamakaiwa Kanakaole, my dear mahu sister from Hawaii Island, was willing to collaborate. This is a new chant, but it has a timeless reverberation that reflects her descent from a prominent genealogy of hula masters.

What’s next in line for you and the team after the success of Kapaemahu?

We believe that Kapaemahu will be a powerful tool for educating and raising awareness about the stones, their meaning, and more broadly about the wealth of knowledge and stories from across the Pacific. The Bishop Museum – Hawaii’s largest and a premiere repository of Pacific culture – will open an exhibit featuring the animation in 2022, which will coincide with the PBS broadcast of a feature documentary about the project that we are co-producing with Pacific Islanders in Communications. There will also be a digital version of the project available for exhibition worldwide, and we’re in conversation with our local tourist authority and several airlines about in-room and in-flight screenings. Everyone who travels to Hawaii should know and respect this story and the historical stone monument.

There are so many of our stories that deserve – no, need – to be told, and animation is such a powerful medium to do so. Our dream is to produce an entire series, the first being Kapo Ma’I Lele, which we are currently producing with three talented women animators. It’s a tale of female empowerment that’s likely to cause a bit of a stir.