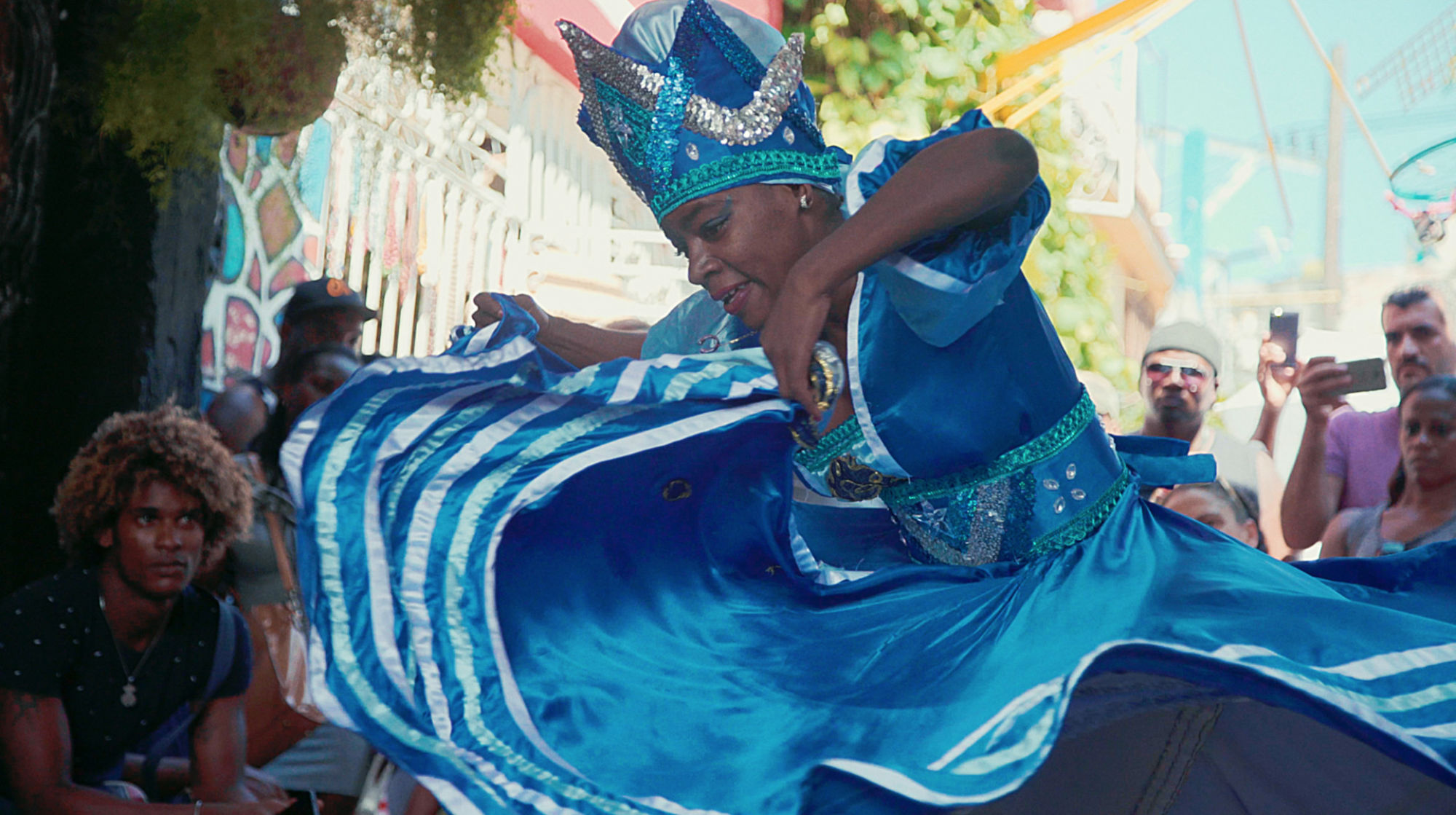 If anything was to exemplify the contradictory nature of Cuban society and its strange convergence of religion, music and politics it would be the hypnotising rumba and the personalities within. Whilst it might not be as well known as salsa, the music of rumba blends Congolese style percussion, flamenco soul baring singing and Africa’s most beautiful traditional dances. It’s a musical genre that can be light and comical, and dark and confronting. A film we heralded as one of the best shorts at Sheffield Doc/Fest 2020, Uproar explores the dichotomies of rumba, focussing on the magnetic and forceful Diunis and her mould-breaking, all women group Rumba Morena. DN is thrilled to premiere Uproar alongside an interview with Director Moe Najati who delves into the challenges of peering under the skin of this complex intersection of religion, music and gender dynamics.

Where did the inspiration for Uproar come from? Was it always in mind as a documentary project?

A photographer friend of ours visited Cuba on a project in 2014 when the country was opening up to visitors and his work inspired me. I didn’t really know much about Cuba but for the popular revolution figures like Castro and Guevara, so I wanted to learn more about it and educate myself. Obviously, being a filmmaker, I couldn’t help but anticipate unique stories to possibly explore in the future.

The Buena Vista Social Club was my starting point being a big fan of the music and Wim Wenders’ documentary about the band. I somehow came across Cuban rumba which was new to me back then and the rich history of the genre just fascinated me as it shared a lot of commonality with the history of Blues music. What intrigued me, even more, was how overlooked rumba was on the international stage in comparison to other popular Cuban music genres like Son, Salsa and Cha-cha-cha.

There wasn’t much I could find online on the current state of rumba in Cuba, but I got hold of a couple of books and an article or two on the genre’s history and how integral it is in the Cuban social fabric. I had a strong gut feeling there was a very powerful story there, so I put a treatment together and reached out to Matt Cooper and Georgia Woolley at Villager Films.

Villager kindly agreed to back the project with the help of Robert Rosenberg of Trinifold, Nigel Sinclair, Jeanne Elfant Festa of White Horse Pictures. Co-producer Aaron Wagner and I went on a research and development trip to dig deeper into the rumba scene in general and hopefully find an inspiring personal story to base the film on. Rumba Morena was not even on our radar and most of the bands we interviewed were predominantly men. I had a fair share of documentaries under my belt back then and naturally felt that a documentary would be best suited to tell the story of Cuban rumba. 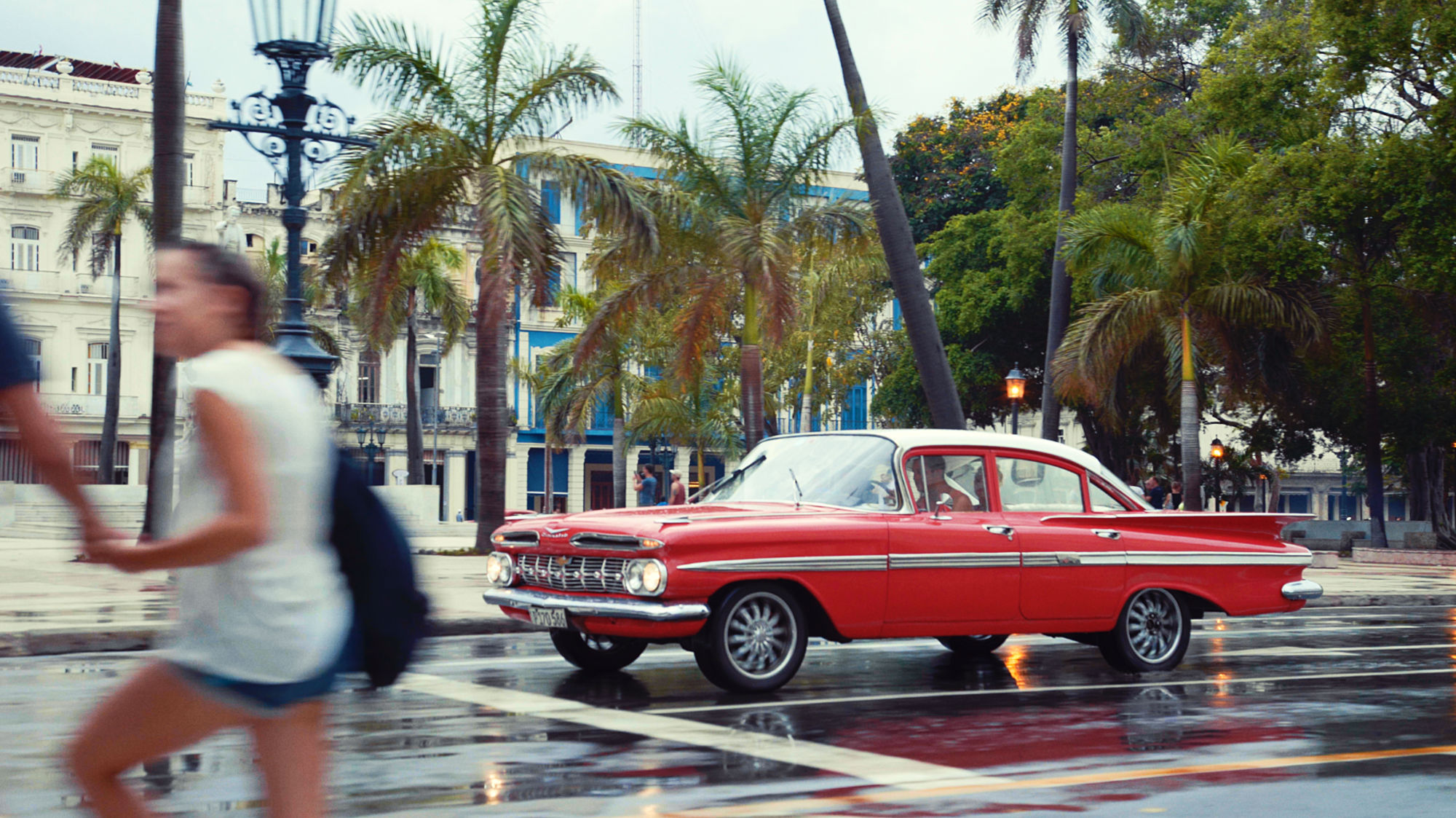 After backing the project how much of a creative licence did Villager give you to shape the film as you saw fit?

It was great having Villager on board. I was new in the UK at that time and needed the logistical, financial and creative support they provided. I was trusted to run with the film creatively, as the project was my baby. Having my friend Aaron Wagner on board was a blessing. Aaron and I worked together in Jordan and the US on a couple of projects. He ended up co-producing the film and supporting me on both trips without imposing any restrictions.

Character selection can be one of the most challenging aspects of documentary filmmaking. How did you find your contributors and how approachable were they?

I had a wish list of Cuban artists to talk to during research and development but wasn’t sure how I’d reach out to them. There was no internet in Cuba in 2015 and very little information about them was online. Aaron put me in touch with Mike Polarny, a DJ from Poland who works mainly in Latin America. He was connected to the rumba scene in Havana and managed to reach out to the artists I wanted to talk to. He also recommended some other great ones as well.

Everyone was mostly approachable, but communication was always a challenge, especially when we were on the ground in Havana. Some contributors didn’t have mobile phones, so we’d have to ask around the neighbourhood for their address and just show up at their doorstep without any prior notice. Luckily, this is the norm in Cuba and some of our best interviews happened that way.

The addition of Rumba Morena forced me to make some tough decisions on contributors.

On the last day of that first research trip, we randomly stumbled upon Rumba Morena in a back alley. Their music was not like anything we’d heard in our two weeks of research and their story, passion and dedication were even more inspiring! We knew we had to go back and tell that story. Things changed when we stumbled upon this fabulous group as we had Diunis’ (bandleader) direct landline, so we’d call and arrange every step with her directly which was more efficient. The addition of Rumba Morena forced me to make some tough decisions on contributors. The band is made up of nine women, and to me, the story of rumba manifested in their personal story, so I had to drop some artists to focus on the band.

Cuba can be a politically charged place, did you come across any obstacles while filming there?

It’s hard to think of a film set in Cuba without thinking about the politics of the place, we were very cautious going into the country for that exact reason. The revolution has been on rumba’s good book., It was under Fidel Castro that rumba was embraced as the voice of the Cuban people after years of being labelled the music of the slums. Of course, we were made aware to avoid discussing political figures or certain policies with our contributors. We were also told that we could be watched and might get our footage checked by government officials at some point. Luckily, none of that happened, so it was smooth on that front.

What exactly does a research trip into the vibrant streets of Havana entail?

A lot of lessons learned. My first trip was indeed for research purposes but I was already making the film in my head. We had everything planned before going to Cuba; a detailed daily schedule, a rough shot list, etc. But a couple of days in, we realised we had to throw all that away. Things work differently in Cuba, so there was no point trying to impose our way of working. I can’t deny my frustration at how things felt out of control at first but it all worked out in the end. We had to adapt and roll with whatever came our way.

Things work differently in Cuba so there was no point trying to impose our way of working.

A large component of the film focuses on the cultural misogyny within Cuba and in particular amongst the old guard of rumba. Were you worried about the reception to the film having decided that Rumba Morena would be the focus?

Cuba is a country of contradictions. Almost everything contradicts everything, yet there is harmony to it all somehow. Although misogyny was apparent to us in certain areas, we were also surprised to witness a lot of appreciation and respect for women in other parts of Cuban life. My main concern was more about trying to address a very culturally sensitive social issue as an outsider, without projecting any kind of bias into the story. It is a very fine line and of course, some people might oppose the female-focused approach, but that doesn’t worry me at all. The initial reaction has been great so far. 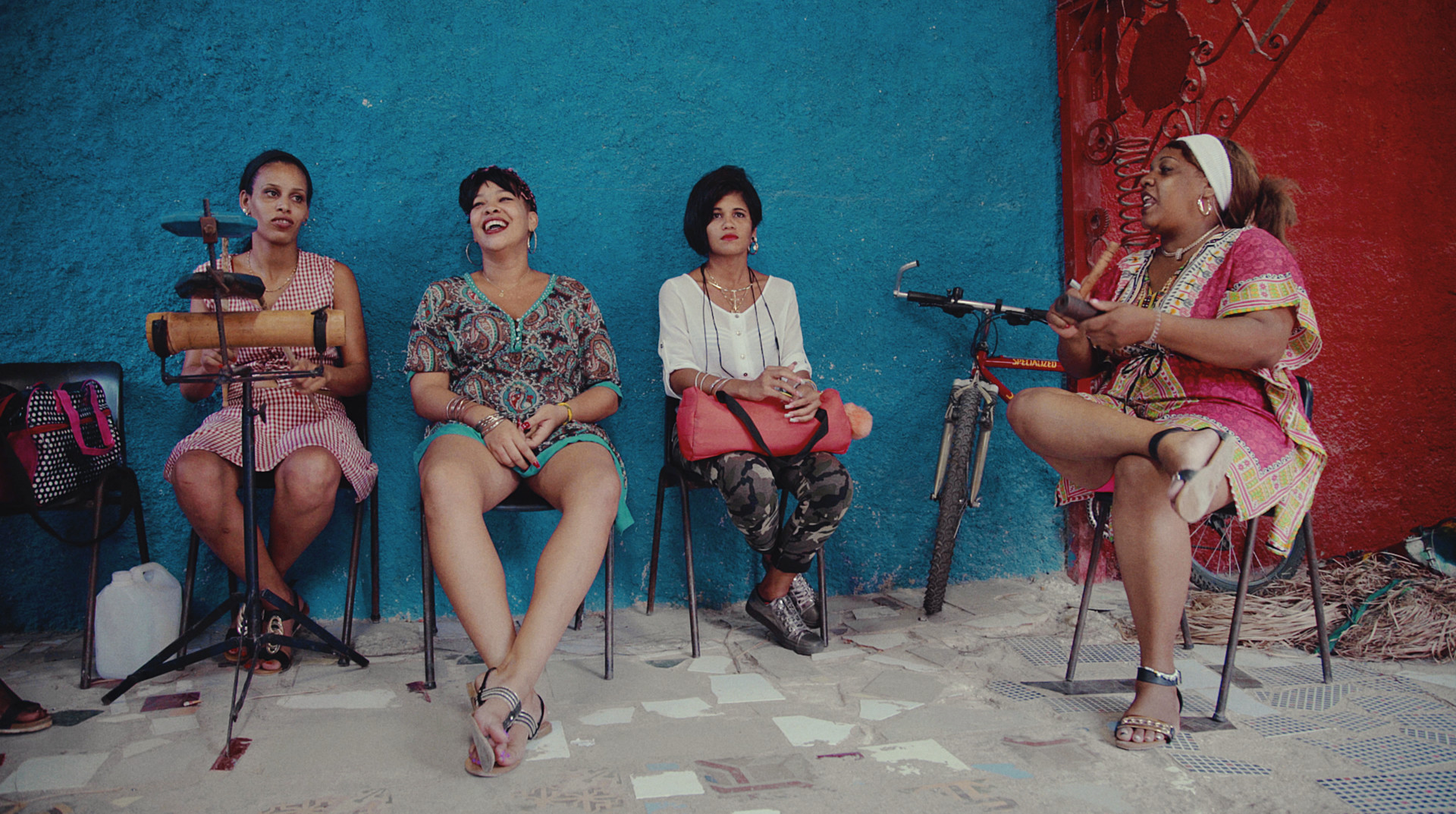 How long was the shoot and what gear did you use?

We filmed Uproar over 2 x two-week trips with a very indie approach. I was interviewing the artists (with a translator) and recording sound myself on a ZOOM H4N. Most of the film was shot on the Sony A7S II with basic prime lenses that Sebastian Cort (DoP) and myself operated. We had a little stabiliser, a monopod and a tripod. Being a small team allowed us to be very nimble and agile, it helped the interviews feel more personal and natural as from previous experiences, a big film crew, cinema lights and cameras can be intimidating to contributors and their families.

My main concern was more about trying to address a very culturally sensitive social issue as an outsider, without projecting any kind of bias into the story.

We’d have a home-cooked meal or a coffee before filming and talk about whatever came to mind with the contributors. This allowed me to notice the unique environment and aesthetic in their homes. Every detail, colour and decoration had an interesting back story and meaning to it. I wanted that to be present in the cinematography as I felt their living environment was an extension of their character. 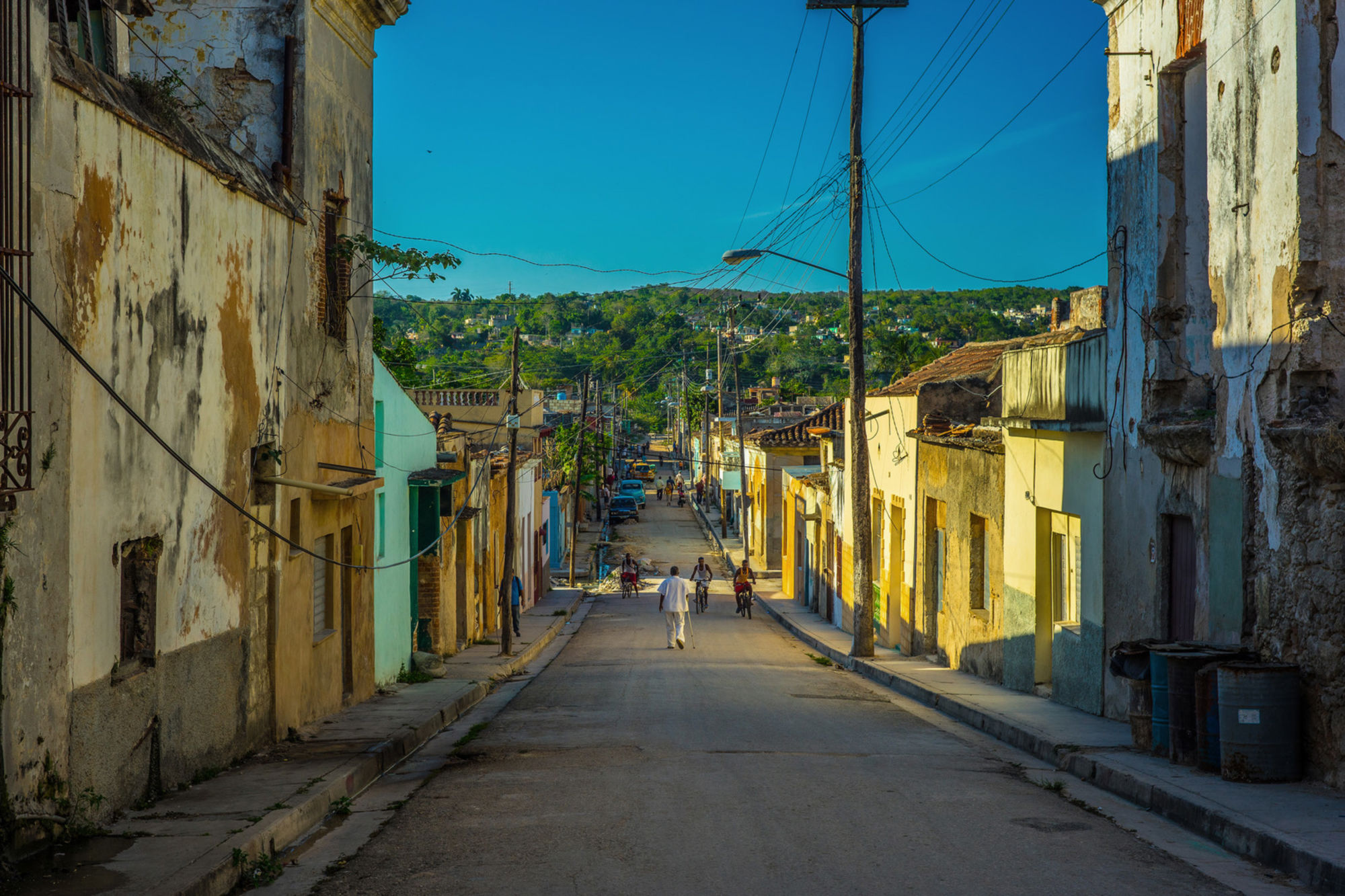 To what extent did the edit help to solidify the film’s aesthetic?

I think we achieved most of the aesthetic in-camera while on location, but I was able to balance how much of it ended up in the final cut of the film in editing. I’m a true believer of Luc Besson’s quote, “A movie is made three times: it’s made when it’s written, it’s made in production, and it’s made again in post”, especially in a documentary.

Editing played a big role in the telling of the story in Uproar. It did take a little longer than we all anticipated, but it was a learning curve for me as a director and editor. My favourite section of the film involves the juxtaposition of the ‘Cajone of Death’ drumming sequence and the ‘Dance of the dead’ dance performed by the band outside their building block. Although both sequences were filmed in different parts of Havana, on two different trips, the juxtaposition made it feel like it was happening in one place, or at least, that’s what I was aiming to achieve with it.

What are you working on next, are you sticking to documentaries?

I’m in early prep for my short sci-fi titled Thereafter. The script has been in the works for around three years. It is a proof of concept for a feature film which I’m developing as well. I’ve made quite a few short documentaries and feel it’s about time I started exploring drama and fiction. My next documentary has to be a feature-length or a doc-series as I’m more interested in long form moving forward.

Directors Notes is honoured to present the premiere of Uproar on our pages today. If you would like to join the filmmakers sporting a fetching DN Premiere Laurel, submit your film now.